A vote for Bush will hurt your love life

If men truly care about having sex with women, they should pull the lever for Gore. 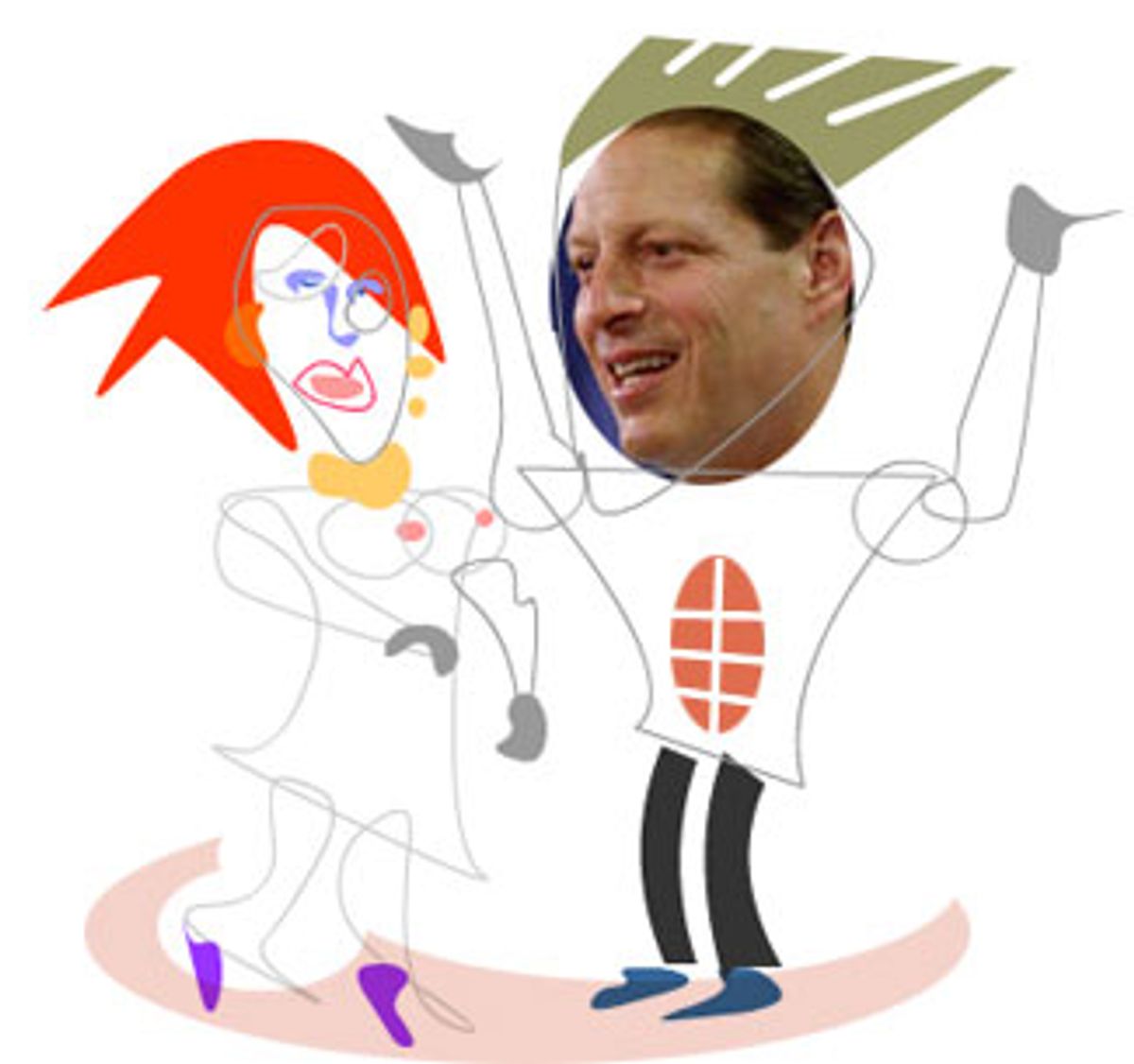 Our choices for president are Bush and Gore. Bush and Gore. What a weird juxtaposition of names. I mean, where are the semiotics people when you need them? Sex and violence are such a strong part of our culture, and here we have Bush and Gore, these crazy signifiers sitting there, waiting to be deconstructed and critiqued.

Ah, the irony that the Republican is the Bush, the woman, the pussy, when such a short time ago Reagan was such a testosterone-filled presence. Bush even lives up to a feminine stereotype, trying to "bring people together" and end all this bickering. It's like he's our mom or something. Then there's Gore, the stiff, large, blunt object of a man, tougher than previous Democratic candidates -- four words: Dukakis in a tank -- and ready to pounce with bestial rancor when unleashed from his handlers' insistence on him looking like "nice Al." He's a real man, that's for sure, the New Democrat as warrior, an odd combination. But the juxtaposition of their names is so uncanny -- Bush and Gore. It's a feminist deconstructionist's dream. All of the different ways to say that our patriarchal culture breeds violence against women, and it's sitting right in front of us -- Bush and Gore are the choices. Somewhere Andrea Dworkin's sturdy frame is rattling with rage. That the candidates for president evoke thoughts of Andrea Dworkin truly makes me feel like I've gone through the looking glass.

It's the day before Election Day, though, so any "interesting" analysis of signifiers and the like means squat if your candidate doesn't win. My candidate is Gore, and I'll tell you why he should be yours, too: If you vote for Gore, you'll get laid more. You see, this election is odd from another angle as well -- the gender gap between the candidates is huge, with women giving their votes to Gore and the men giving theirs to Bush. Given the name association, I can understand men voting for Bush, but I really recommend those voters going on name association alone to switch from sex to violence, because the one with the violent name will get you more sex. Yes, sex and violence -- good, huh?

I need to explain this a little more, though. If women vote for Gore and men vote for Bush, one sex will win and one will lose. If Gore wins, men will likely not stop having sex with women because they voted for Gore. Life will not really change for men; no one will be tampering with their rights as men, so they won't really take it out on women. They'll dislike Gore, maybe, and they'll think that Bush would have been better, maybe, but that won't get in the way of trying to get laid. I can't really imagine any man saying, "She's hot and naked, but she voted for Gore, so I left."

Women, on the other hand, won't be so understanding about this election. To many of us, this election is important. I hear a lot of women talking about the Supreme Court, because the idea that Roe vs. Wade would be overturned is an idea that many of us genuinely fear, even if we have qualms about abortion. Our rights are at stake in this election, and we know that "strict constructionist" judges don't support our rights. We hear pro-life types talk about how banning abortion is just a first step to getting rid of birth control pills and other types of birth control methods like IUDs. Now, even if you oppose abortion and think that overturning Roe vs. Wade is a good idea, think about the effect that changing the legal landscape for women's reproductive rights will have on your ability as a man to get laid. Then forget getting laid at all, because women whose options for dealing with an unplanned pregnancy have changed will decide to spend nights with vibrators instead of you.

There are several reasons for this change. First, if abortion is restricted, restrictions will shortly thereafter extend to things like the morning-after pill, so women will know that if they get pregnant they will have no options other than carrying to term or a back-alley butcher. Women will have less sex and will take a lot longer in the dating process before having sex. Straight men will then have less sex. Second, if abortion is restricted, birth control is going to be next -- birth control pills, Norplant, Depo-Provera, it's all like abortion in the minds of the most devoted pro-lifers. So, if women can't use birth control pills, they're really going to cut back on their sexual access -- for men, that is, your sexual access to them. (Oh, and forget silly luxuries like sex without condoms -- men will have to wear super-thick, reinforced condoms if women can't use the pill.) Third, and most important, women will be really pissed off if they can't have sex as easily as they'd like, and they will never have sex with you if you voted for Bush, because it will be your fault that you elected some jerk who made them have sex less. So, to the extent women will be having less sex because of the legal restrictions, you will be having no sex because you voted for someone who restricted the ability of women to have sex.

So, women, vote for Gore, because he's your best shot. Men, vote for Gore too, that is, unless you like living like Nader. In this case, a vote for Bush is a vote for less bush, and for once, I encourage men to vote with their dicks.

Ellen Fulton is a writer in Washington.