Hang it up, Tom

The once massively cool Tom Wolfe is trying to secure his legacy, but his new book doesn't pass the acid test. 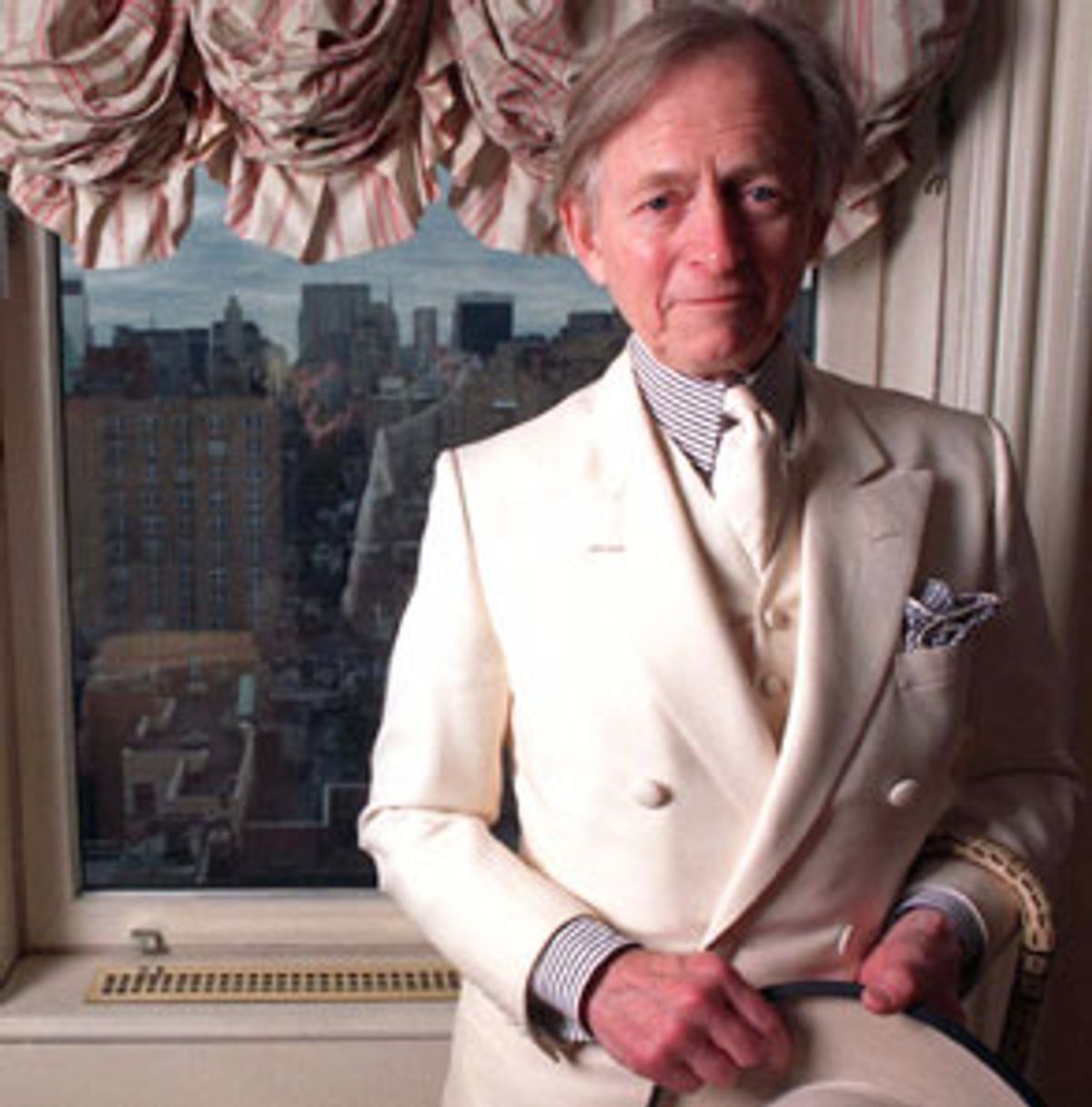 Here's how it goes with Tom Wolfe: You were in high school, you stumbled across "The Kandy-Kolored Tangerine-Flake Streamline Baby" or the "The Electric Kool-Aid Acid Test" while killing time in the fluorescently depressing library stacks. That prose! That frantic, amped-up, rollicking, vigorous language! Who was this guy? And the payoff? He wrote for Rolling Stone, your pimply adolescent bible. You were captivated. This was not your father's journalism. You checked out everything you could get your hands on and didn't leave your room for a week.

That's how it goes with Tom Wolfe, for young men who came of age in the '70s, who were weaned on the New Journalism; in fact, who didn't even know that there was any other kind of journalism that could be written. Tom Wolfe was a touchstone, the nonfiction equivalent of Thomas Pynchon and Jack Kerouac, a dandified brother to Hunter Thompson (who young '70s men would discover soon enough). Tom Wolfe didn't write about boring crap; Tom Wolfe wrote about the Merry Pranksters and whether you were on or off the bus, and about dropping acid, and he wrote about surfers, and he wrote about cars, man, and he wrote about those superbad mofo Black Panthers and it was all so ... unbelievably exhilarating. He had no respect for grammar, his syntax scintillated, it sparked, it throbbed. He threw around exclamation points and capital letters with efflorescent abandon. He broke the rules. He looked frooty in that white suit, but so what? He was massively, unquestionably cool.

Then -- POW! -- "The Bonfire of the Vanities" began to appear in Rolling Stone and there it was: Tom Wolfe really was a genius. The dude could write anything. It was a bright time, and Tom Wolfe, in that crazy white suit, burned more brightly than anyone. He wasn't young, but he seemed like he was. He was the Dick Clark of American letters. You could dance to Tom Wolfe. You wanted to.

Unfortunately, nothing bright can stay that way forever, and like the Hindenburg, exploding and crashing in flames in New Jersey, Wolfe is currently burning out in dramatic fashion. The spectacle is heartbreaking, because Wolfe, formerly a maestro of perspective, possessed of a preternaturally reliable critical eye and a sensibility that could slice steel, has lost it. Worse, Wolfe no longer reads young. In "Hooking Up," a flabby collection of recently published and reprinted articles, plus a novella that originally appeared in (where else?) Rolling Stone, Wolfe reads old.

Of course, the secret to Wolfe's success was that he always thought old, but he had the foresight to phrase his contrarian insights in brassy pop chords. A patriot, a conservative, a stodgy champion of throwback architecture and the naturalism of Zola, Wolfe -- like his equally severe though far less entertaining distaff counterpart, Joan Didion -- was the haughty interloper who was unexpectedly adopted by the Woodstock Nation. He got away with it because his curiosity was unflagging. The national freak show served his purposes, but you could also tell that he loved it. And, as the pieces included in "Hooking Up" clearly demonstrate, he never lost his faultless reporter's nose for a great story. Or a fur-flying, guns-a-blazin' dogfight.

The problem is that Wolfe's talent for polemic has superseded his appetite for stories culled from the American hurly-burly (the "Billion-Footed Beast" of his notorious 1989 Harper's essay). His once-infectious enthusiasm has been replaced by glib thuggery, a journalistic version of the toothless coot telling the damn kids to get the hell out of his yard. The title essay is a soap bubble, the reportorial sketches ("Two Young Men Who Went West," "Sorry, But Your Soul Just Died") rich in detail but rife with contradiction and the hardcore stuff, the much discussed attacks on campus radicals ("In the Land of the Rococo Marxists") and the literary lions (Updike, Mailer, Irving -- Wolfe's "Three Stooges") who jeered "A Man In Full," the bestselling follow-up to "Bonfire," suggest a bully whose huffing pugnacity is infuriatingly ignored.

Wolfe also continues to prove that he is one of the worst art critics who has ever lived (which is surprising, because he is a skilled artist himself and has illustrated several of his books). "The Invisible Artist," a pained eulogy for Fredrick Hart (and a quickie rehash of his 1975 anti-art-world screed, "The Painted Word") proves this beyond a reasonable doubt. Hart is the sculptor whose trilogy of faithfully realistic soldiers was tacked on to the Maya Lin Vietnam Veterans Memorial in Washington. "Her proposal," Wolfe writes, "was a V-shaped wall, period, a wall of polished black granite inscribed only with the names [of the dead]; no mention of honor, courage, or gratitude; not even a flag. Absolutely skillproof, it was."

And absolutely unforgettable, it should be pointed out, certainly the most aesthetically and emotionally resonant war memorial ... in the history of warfare. It doesn't matter to Wolfe that there is both wide popular and critical agreement on this, and that most people of even mild opinions about art consider the Hart addition to be a vulgar distraction from Lin's stoic, powerful slab. In his mind, art ought to represent the world. He is at least consistent -- pledging allegiance to naturalism on numerous fronts throughout his career -- but sifting through "Hooking Up," it becomes painfully obvious that, while Wolfe might be scarily good at characterizing the footwear of bond traders or the sweat stains of bankrupt real estate tycoons, his eye for anything not drawn strictly from reality is dreadful. He is a flagrant, rhetorically overheated literalist. Abstraction, ambiguity -- anything tainted with the funk of European modernism -- repels him. It fires the reactionary furnace that has always smoldered deep within his rather bland personal sensibility.

Of course, we should have seen this coming. Anyone who would persist in donning, for every public appearance, that dumb white suit, complete with spats, dwells in a realm of self-contrived fantasy so insular and narcissistic that only a journalist on the order of ... Tom Wolfe could be relied upon to capture the full arrogance of the pose. (Which is precisely what happens, as Wolfe alarming references himself throughout "Hooking Up.")

The analogy that leaps to my mind is that of the swayback thoroughbred, still trying to jump the fence and sprint to the racetrack. Trouble is, America doesn't want to play the ponies anymore, and Wolfe, who once held all the speed records at the Churchill Downs of American journalism, finds himself in the awkward role of hustling up buzz from the back of the pack. True, he can still sell a million books. Big books. But his thumb has slipped from the nation's pulse to his own. The inclusion of his legendary two-part hit job on William Shawn's New Yorker, "Tiny Mummies" and "Lost in the Witchy Thickets," causes "Hooking Up" to resemble a post heart-bypass Wolfian attempt to secure, Clinton-style, his legacy.

Both pieces, published in 1965 when Wolfe was a staffer at the New York Herald Tribune, are an absolute hoot. Post-Tina Brown, it's difficult (though not that difficult, depending on how old you are) to remember how fusty, how devoutly unhip, the New Yorker was during the Shawn era. You hear the stories about the dilapidated sofas and the shuffling hush of the sepulchral hallways and the dandruffy editors in their third-generation tweeds and it all seems ... well, pretty pre-Tina. Still, back in the day, the New Yorker functioned as the very citadel of WASPy literary eccentricity, and in 1965 Wolfe nailed it, right down to the colors of paper used for the magazine's memos. The ensuing brouhaha, for all practical purposes, made him the Tom Wolfe we know today.

And he's not about to let us forget it. It's difficult to figure out why he so ardently longs for this validation, unless his own sense of mortality has finally begun to kick in. Sad? Probably. But the seeds of this crisis were planted years ago.

To a degree, Wolfe's snobbery -- which is the snobbery of a writer who, for a time in his career, was basically frozen out of the media elite -- has always been at odds with his oft-stated recommendation that any writer worth his salt must bravely venture forth to see for himself the woolly hog-stomping America that all the world envies. Again and again, however, Wolfe has returned from his own field trips simultaneously invigorated and repulsed. His relationship with his mad mistress, with her spacious skies and the purple haze and the sordid cities, has always been deeply schizo. He believes that American is great. But he believes Tom Wolfe is greater.

None of this in and of itself means that a lot of readers won't relish "Hooking Up" (I must admit that the inclusion of the New Yorker pieces alone makes the book worth $25). But some of us know better, because we've seen Wolfe in full gallop and we know that he should be able to find some fat American oxen in greater need of goring than Stanley Fish and Judith Butler (both get creamed in his essay on academic Marxists). The new century belongs to America -- to O.J., Monica and Bubba and skatepunks, PlayStation 2 and pro wrestling and a thousand new as-yet unspawned pop horrors. Now, more than ever, we need Wolfe to get his game back. "Hooking Up," unfortunately, suggests that we both may be running out of time.