Why is this race even close?

Because George W. Bush has campaigned better, proposed more forward-thinking programs and proved, in the end, that he's smarter than Al Gore. 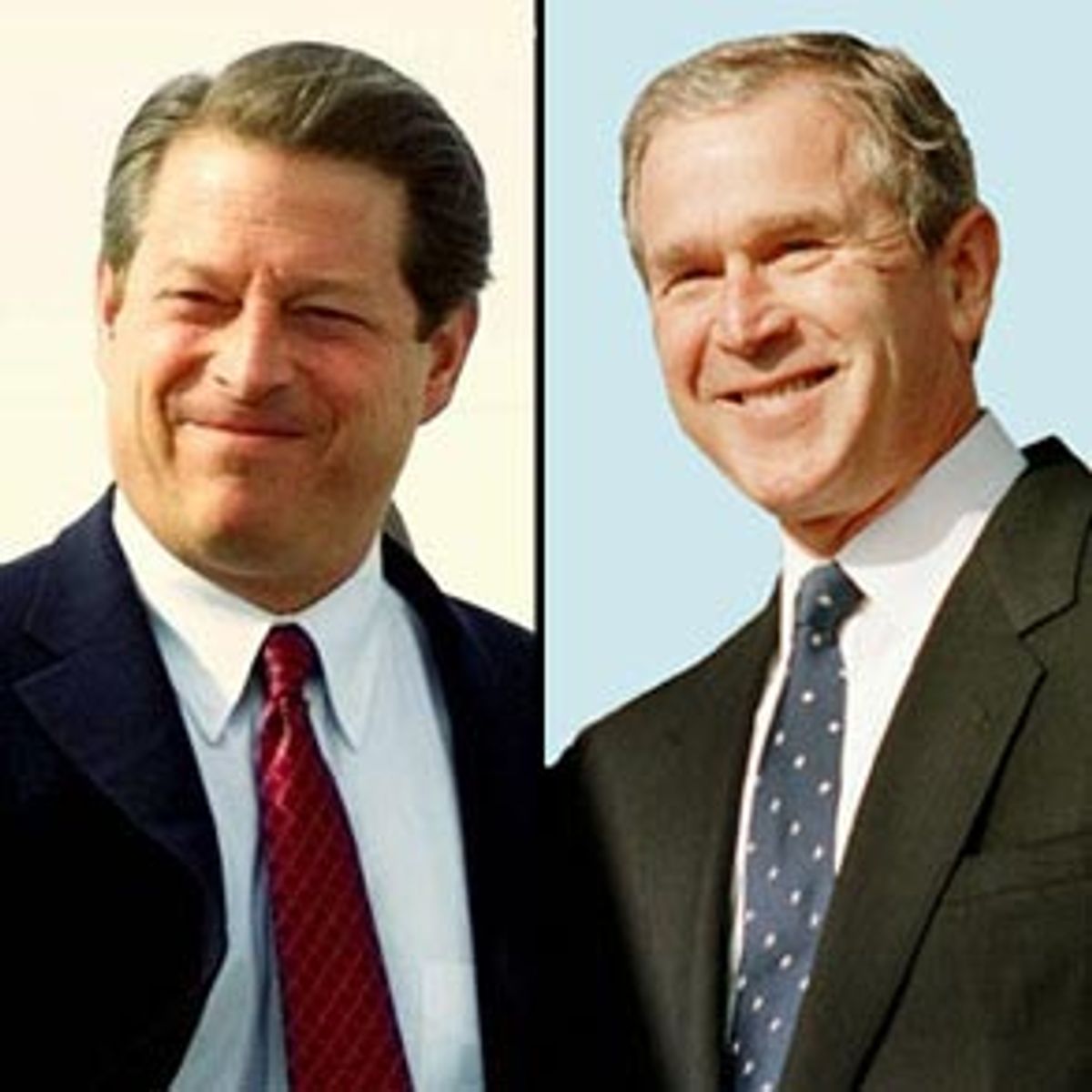 If anyone had told me back in February that I would be endorsing George W. Bush for president in November, I wouldn't have believed it. I was a McCainiac back then, and an Al Gore sympathizer. You can check my columns to see that I'm not making this up. I wrote several zingers on Bush, especially after Bob Jones and the refusal to meet with Log Cabin Republicans. I'm not a Republican. I'm a small-government independent: fiscally conservative, socially pretty liberal, with libertarian leanings. I supported President Clinton in 1992. I'm gay, and it is hard to forget the vile gay baiting that has passed for social policy among some of the Republican right in the past decade or two.

Sure, I became a Clinton critic in the mid-1990s, but I never extended my contempt to Gore, whom I always took to be a decent, earnest man. I found the social agenda of the Republican Congresses of the 1990s to be disgusting -- from their anti-immigrant posturing to their gay baiting. And I found much that the New Democrats did -- from welfare reform to the expansion of the earned-income tax credit to NAFTA -- to be admirable government policy. I also believed that the New Democrats represented a good start toward undoing the identity politics of the previous years, a politics that has done nothing but further marginalize minorities in a well-meaning attempt to help them.

So why George W. Bush? The answer turns out to be a pretty simple one. When I look at what he is proposing to do, I agree with him far more than I do with Al Gore. For me to support Gore on his current big-government, leftist platform would simply mean renouncing most of the principles I have long believed in and cherish. Let me explain.

The surplus. Bush's tax cut is too big for an already overheated economy. But I do believe that the bulk of the surplus should go either toward paying down the debt or toward reducing tax rates for all of us. Leave that money in Washington and it will be guzzled up by a thousand pork-barrel projects or by the bottomless pits we call Medicare and Social Security. Gore has no real tax cuts. He merely has a bunch of new tax shelters, designed to pander to certain constituencies. Our tax code is already way too complicated without adding another layer of micromanagement.

Gore also wants to funnel most of the rest of the surplus into an unreformed Social Security system. To my mind, that's money wasted. Social Security was a system designed in the 1930s, and the way it siphons vast amounts of productive capital into low-paying government investments is explicable only in the context of a country terrified of another Great Depression. It should, in my view, be privatized along the British model, a part-public, part-private system that has led to a transformation in that country's fiscal standing. Bush's plan is half-assed and vague. With any luck, it will be improved and fully analyzed before it is ever implemented. But at least Bush has put reform on the table. If he's defeated, we won't have a chance to revisit it until it's too late. Gore's know-nothing response to the looming Social Security crisis, his desire to keep it as an election issue and his pandering to the elderly to preserve it have basically cost him my respect.

Healthcare. It's quite clear now where Gore wants to take the country -- toward a government-controlled medical system. His support for a new prescription drug entitlement under the existing Medicare program is the surest sign of this. He wants to give a benefit that's soaring in price to the wealthiest group in society: the already pampered elderly. Apart from winning Florida and Pennsylvania, Gore's aim in this is surely to increase the federal government's leverage with the drug companies and thereby force drug prices down. The next step is price controls, and a slowly expanding federal role in medicine.

All of this would, in my view, be disastrous. We would hear another giant sucking sound as Medicare costs, unrestrained by HMOs, soared. We would see a swift decline in research and development as the drug companies saw their profit margins clobbered. We would move one step closer to the socialized healthcare systems of Europe, where everyone gets the same, crappy care, except for the superrich, who can escape. I feel particularly strongly about this because I have HIV. Gore's attacks on the pharmaceutical industry -- and by extension, the industry's research -- represent a far bigger threat to people with AIDS than anything Bush is proposing. But the AIDS establishment is so intermeshed with the Democratic money machine that it will never tell HIV-ers the truth.

Identity politics. One reason I liked New Democrats was their resistance to the victimology culture of the ethnic and sexual interest groups. I believe in an equal society with equal rights for individuals -- not a balkanized society where membership in certain groups guarantees special privileges and rights. Gore, to my great surprise, has turned out to embrace groupthink in all its forms. He believes in crude affirmative action, just when most people realize it's counterproductive and immoral. He supports a hate crimes law, a fascistic device to bring group rights into the criminal justice system and use law as an instrument of the thought police. He opposes measures, like gay marriage and school vouchers, that would grant equality to individuals of any group and demand responsibility in turn.

Bush leaves a lot to be desired on these issues. He has ducked a forceful rejection of affirmative action, he believes in hate crimes laws for some groups but not others and he thinks gay people should live as criminals under sodomy laws (which is almost enough to send me back to Gore). Bush would represent an uneven and unprincipled check on the balkanization of America. But a check is better than the expansion of the racial and sexual apartheid favored by Gore.

The campaigns. Quite simply, if Gore runs the country the way he has run his campaign, we're in huge trouble. He micromanages, he bloviates, he condescends, he panders, he demonizes. He compares some Americans to vermin, he equates opposition to him as evil, he attacks the very people he takes money from, he changes themes from day to day and hour to hour. He has no ability to relate to most Americans, resorting to the corniest rhetoric and cheapest of cheap shots on a daily basis. What passes for his intellect is the most pretentious, pseudo-intellectual drivel you're likely to hear this side of a Bill Moyers special.

Can you imagine how he'd run the country? We'd have more chiefs of staff in four years than versions of AOL.

Bush is no hero. He's incurious, he's inarticulate and he bears all the marks of the privilege into which he was born. But he has at least been vaguely consistent, he's kept his pledges (to campaign in California, for example), he has avoided the puritanism of past Republican campaigns and he clearly won all three debates. His veep pick has survived the test of time better than Gore's. To be honest, I never expected him to campaign with this kind of skill. Is he too dumb? It wasn't Bush who compared running the country to a bagel or went on about the "self-sameness" principle. It wasn't Bush who managed to turn what should easily be a landslide victory into a squeaker by his sheer political stupidity. Bush is no intellect, but he's no dumber than Dwight Eisenhower or John F. Kennedy. And he's surely sharper than Gore.

Two final thoughts. I can hear you all now wailing: How can a gay man support George W. Bush? If you tote up the policies on any number of gay-related issues, it's undeniable -- Gore is far better. I don't want to hide from that. But on some of those issues -- hate crimes law, for example -- I actually agree with Bush. On marriage rights, I obviously disagree about as strongly as anyone could. But a president has little power over the issue. The worst he can do has already been done -- by Clinton, when he signed the Defense of Marriage Act, which was eagerly supported by Gore.

On the military, Gore is clearly better. But forgive me for skepticism. Gore was in part responsible for almost doubling the rate of discharge of gay people from the military in the last seven years. He says he'll end the policy of "don't ask, don't tell." Don't believe him. He can't do it alone; and there won't be enough votes in Congress to do it for him. He'd much rather push legislation, like the Employment Non-Discrimination Act and the Hate Crimes Prevention Act, which keeps gays in their assigned place as victims, and keeps him as the recipient of all the money gay rights groups funnel his way. On the plus side, Bush has clearly signaled an end to the gay baiting of the recent Republican past. The way Dick Cheney handled the question of marriage rights in the debate was encouraging to say the least; and having an open lesbian in the second family can only help. In my judgment, it is far more important for gay people in this country in the long term that the Republicans moderate their hostility than that the Democrats continue their co-optation.

A victory for Gore and the Human Rights Campaign (sorry for the redundancy) would mean the same pattern of the last few years: little progress, continued polarization and more corruption of a civil rights movement that needs to get distance from pandering pols. In short: Gore's better, but not so much better that a self-respecting homo couldn't vote for Bush (or even Nader) for broader political or economic reasons.

Another defensive crouch: I'm not supporting Bush for purely selfish white/rich/whatever reasons. In some ways, my life would be a lot easier if I endorsed Gore. Heck, my paycheck is paid by one of Gore's closest confidants and supporters. Almost all my friends are liberal Democrats. You think I'm going to get a warm embrace from the Republicans? And I'm not desperate for a tax cut. I'm writing this simply because, in my conscience and judgment, it's the right call. I may be wrong.

But one reason I have become so disenchanted with the left is its politics of personal emotional blackmail. One more vicious letter comparing me in truly hateful language to Clarence Thomas and I'll lose it. One reason I have come to respect Bush is that he has not indulged in the same tactics. I hold some slim hope that if he wins Tuesday, our politics might even become more civil, open and, yes, tolerant. I see few signs at present that Al Gore, after the vicious, divisive negativism of his campaign, could achieve the same result.