Resurgent in the polls on the eve of Election Day, Gore campaigns for 30 straight hours. 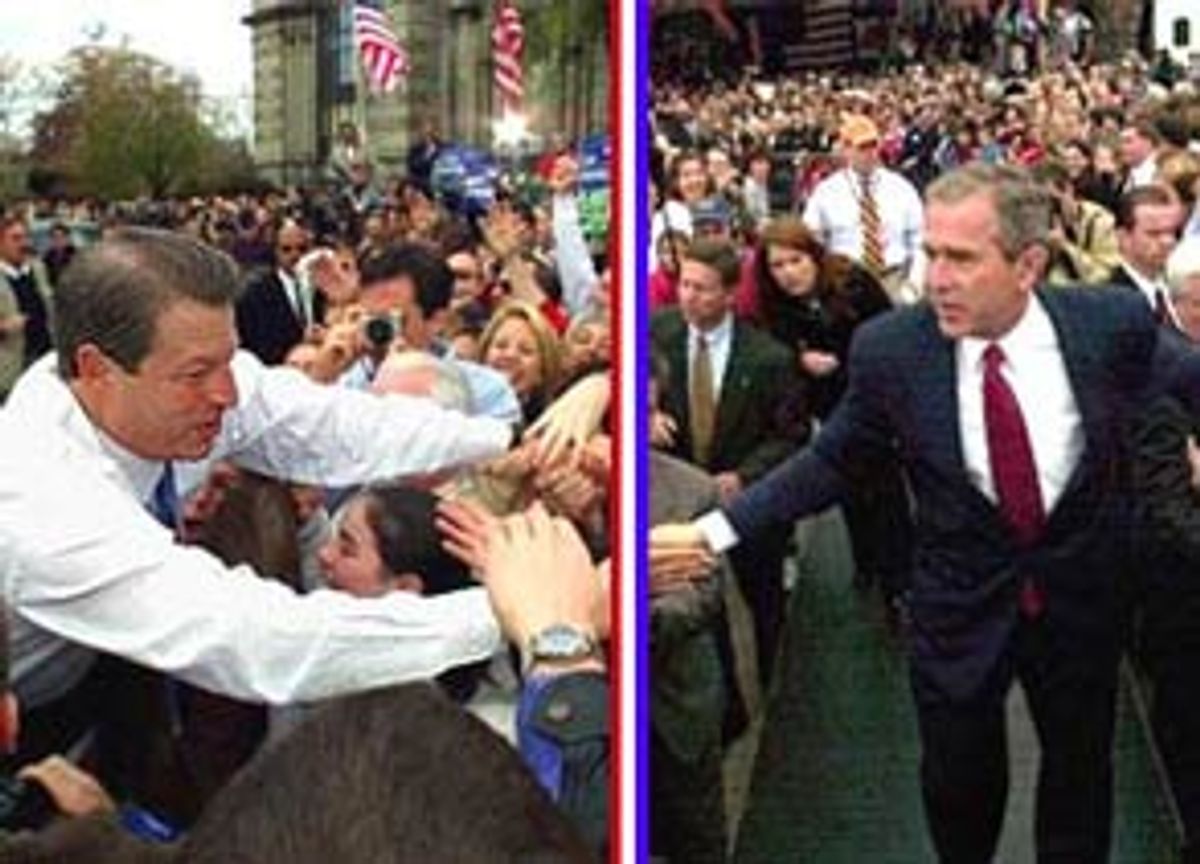 Al Gore landed at Iowa's Waterloo airport at half past midnight and, as the wind whipped a cold, hard rain across the tarmac, a few hundred supporters tucked into an indoor terminal for a rally. "I don't know if you have looked at your watch lately," Gore said, "but this is officially Monday, the last day of the campaign."

Lately, the vice president has been running a race that blurs ordinary ideas about time, with days ending and often beginning again in the wee hours of the morning. Monday's stop in Iowa was no different.

After leaving the rally, Gore arrived at the local Holiday Inn at about 1 a.m. At 5 a.m., he was off again, this time to visit a nearby John Deere tractor plant. (From there, he would travel on to another Iowa stop, and then Missouri and Michigan before ending the "day" at 4 a.m. at an appearance in Florida. By the time Gore lands in Tennessee, ready to vote on Tuesday morning, he will have traveled 30 straight hours.)

After the John Deere stop, Gore visited a Waterloo storefront that serves as Blackhawk County's Democratic headquarters. Total turnout was about 100 souls, and the same icy rain that greeted the vice president the day before continued to pound their umbrellas. But Gore seemed undaunted, praising Democratic Party activists, thanking them for their help and asking for more. "Early to bed, early to rise, work like hell and organize!" he yelled, before shaking every hand that was offered to him before he departed.

Gore must think a lot of Iowa's seven electoral college votes to have lavished so much attention on the state. Or maybe he's just happy to be battling at the site of a previous triumph. For it was his sound victory here that pounded the first nail into the coffin of Bill Bradley's primary challenge in January. But Gore can't expect to have that kind of success this time. According to a Monday poll from Zogby, the state is still a tossup.

From Iowa, Gore flew to the rainy, gray skies of Missouri to speak at America's Center in St. Louis, another journey liable to provoke mixed feelings. The Show Me State is the birthplace of Harry S. Truman, the patron saint of trailing presidential candidates, who partially inspired the populist message Gore used with such success at his convention.

But there are so many more complicated associations for Gore in Missouri, especially now. His August riverboat tour started here, the event that helped him off to a post-convention bounce many pundits believed he would hold through the election. It wasn't to be, however. George W. Bush started to campaign more aggressively in the state and its 11 delegates are now thought to be firmly in his possession.

That may be why Gore sounded a little desperate when he took to the stage in St. Louis alongside other state Dems, including House Minority Leader Dick Gephardt. Though the two tangled in the 1988 presidential primary, when Gephardt accused Gore of dirty campaigning, that was all water under the bridge for the congressman Monday. Then again, Gephardt could afford to be generous, since he could still win even if Gore loses. Throughout the past year, Gephardt, who stands to become speaker, has focused his energy on returning the House to Democratic control, and his party is within striking distance of the needed seven seats.

Perhaps that's why things looked so easy for Gephardt and so hard for Gore on stage. "You know it makes a difference whether or not you have a president who's going to fight for you instead of just making it sound good," the vice president said, admitting that he's not Mr. Personality in what's become a common campaign tactic for him.

There was more at stake than earning electoral delegates. Gore also tried to convince voters that "he wants to fight for you," that he's a harder worker than Bush.

Indeed, after campaigning for 30 hours straight, that's a hard point to dispute. And there's more still to come: Monday evening, Gore will rasp his way through remarks to the United Auto Workers and sermonize to another African-American congregation before ending the "day" in Florida.

Win or lose Tuesday night, Al Gore will be ready for a rest.