Hillary wins one for the Clinton legacy -- but how will she fare in the Senate? 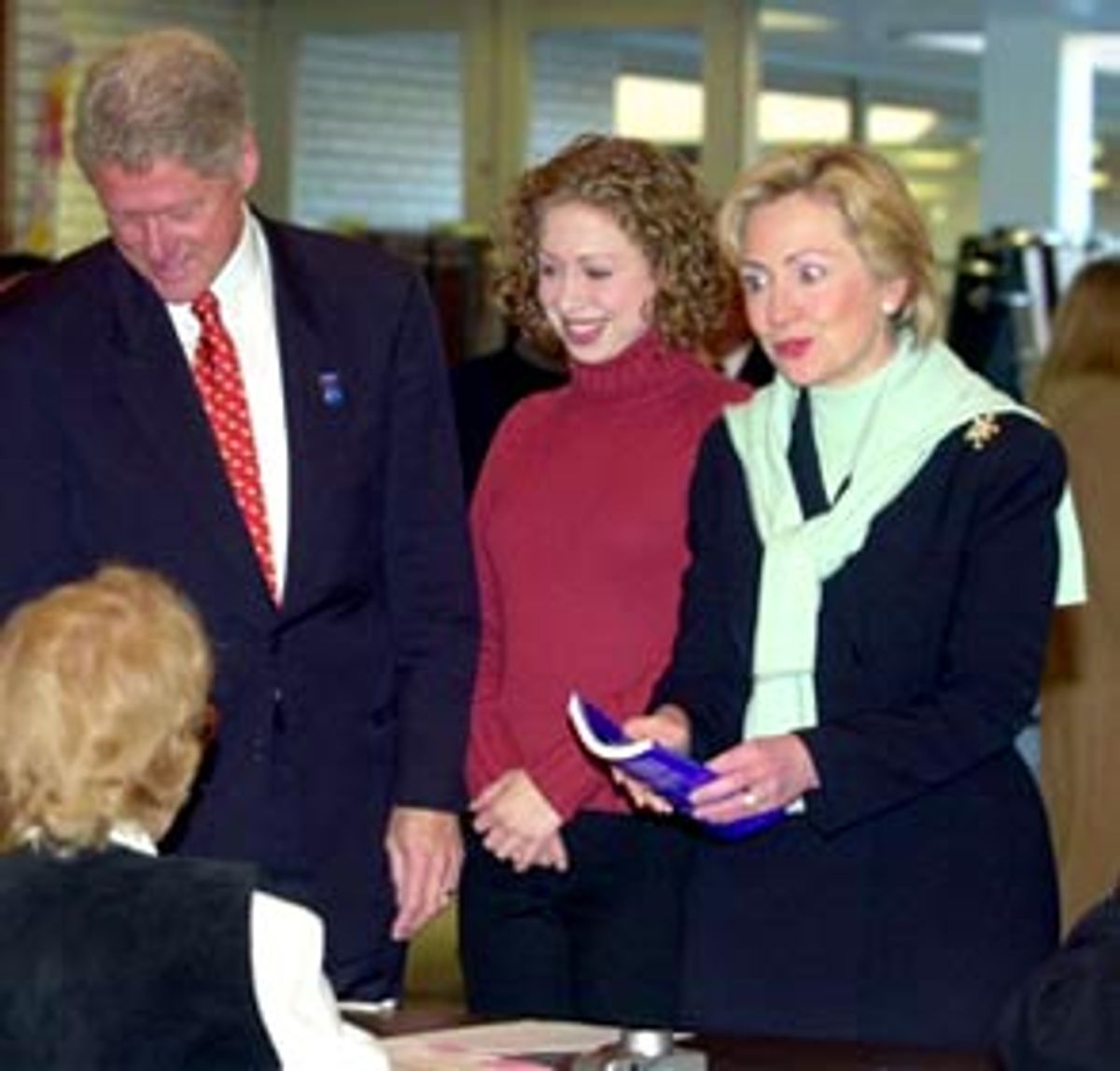 Grand Central Station is swarming with Secret Service. Everybody inside the Grand Hyatt seems to have a credential around their neck or a wire in their ear, waiting for the president of the United States, and the woman about to become New York's next U.S. senator.

The grand ballroom where the victory party is being held is surprisingly small. More than half of the space in the room is taken up by a massive platform holding dozens of television cameras. The rest of the room will only be able to hold a couple of hundred people for tonight's victory party, and it is already overflowing. Drunk New Yorkers are spilling down stairs, waiting in line for escalators, jamming themselves into elevators, all waiting to get a glimpse of their new senator.

There is an old adage in politics: Book a small room, so it always looks full. But Clinton took that conventional wisdom to the extreme. The grand ballroom felt like a Britney Spears appearance in a shopping mall -- except that the New Yorkers were a lot more intoxicated than teenyboppers and the bouncers were all Secret Service agents. Meanwhile, more than 100 reporters tried to weave their way through the crowd, flashing their pink and yellow credentials, many of them pecking away dutifully at laptops and barking into cellphones.

"She's running this party like she ran healthcare," barked an irritated reporter stuck downstairs in the media filing center.

The scene was something to behold. There was an open microphone, hundreds of adoring Democrats crammed into the room, the president of the United States was on the podium -- and he didn't say a word.

Instead he stood next to daughter Chelsea and watched his wife thank the entire state of New York, seemingly name by name, during her acceptance speech. "We started this great effort on a sunny July morning on Pat and Liz Moynihan's beautiful farm. And 62 counties, 16 months, three debates, two opponents and six black pantsuits later, because of you, here we are," she said.

As for her opponent, Rep. Rick Lazio, he was gracious in defeat, doing all he could to calm the crowd at the Roosevelt Hotel who seemed to still want blood. "I feel like the Mets," Lazio said. "We came in second."

No matter what happens in the excruciatingly close presidential race Tuesday, New Yorkers have made history. Any notion that this was just another Senate race vanished Tuesday as the media hive entered full swarm. Soon after the polls closed in New York, at 9 p.m., the networks called the race for Clinton, naming her the Empire State's next U.S. senator.

The battle is now over, and the Clintons have emerged victorious. This year, it fell to Hillary to carry on the Clinton name, which has appeared on ballots since the late 1970s. While Clinton serves out his last 10 weeks in office, his wife is no longer first lady. Tonight she is Madame Senator.

Though the final spread was still unknown, it was substantial enough for networks to call the race precisely at 9 p.m. According to exit polls reported by New York TV stations, Rick Lazio never made a case for why people should vote for him. Sixty-eight percent of his supporters were voting "against Hillary Clinton."

And not surprisingly, it was women who rallied to Clinton's side. According to CNN exit polls, 58 percent of New York women cast their votes for the first lady.

But after the war is won, how will the victor handle the spoils? Is Hillary ready for the Senate? And is the Senate ready for Hillary?

"I think she'll get along very well," said Nebraska Sen. Bob Kerrey, who is leaving Washington to become president of the New School University in New York. "First of all, she's good at politics. She will require respect from her opponents and supporters alike."

But she is also sure to inspire pit-bull-style frothing as she waltzes into the American House of Lords on Jan. 3. "Oh, she'll definitely be used as a foil," Kerrey says. "Look, a Clinton is a Clinton is a Clinton. My guess is that she'll be used in Republican fundraising letters for the next six years. She'll lighten Ted Kennedy's load as a foil used to raise money."

But Republicans on the Hill are already nervous that the GOP's Clinton vitriol can be used against them. Clinton, they say, has proven masterful at deflecting GOP criticism and taking her case straight to the people. "She's like Wonder Woman," says one Republican Senate staffer. "Everything we shoot at her, she just kind of puts up her wristbands and shoots it right back at us."

But, the Republican source said, Clinton can expect to endure more than her share of snubs, especially if the GOP retains its Senate majority. "If Hillary gets a provision or a pork project in a bill, leadership will strip it. A lot of that kind of thing happens in conference, when people go behind closed doors and rewrite legislation in its entirety. (Conference committees are convened to reconcile minor differences between House and Senate versions of various bills.) There are other things like not letting her speak, or just making her wait," the source said. "It's petty, but it's done all the time."

Barbara Boxer (D-Calif.) and Russ Feingold (D-Wis.) are among the two senators who are toyed with most often in the Senate. The GOP leadership even tweaks unpopular members of their own party, especially members like John McCain (R-Ariz.) who routinely push bills against the wishes of the leadership.

Asked by Chris Matthews how Hillary morphed in voter's eyes from being the wife of an adulterer to Joan of Arc, Rep. Peter King, R-N.Y., responded "because we made her more of a victim" (than she already was).

But the presence of the Hill on the Hill also has some Republicans worried that members of their party simply won't be able to help themselves. "What Republicans will have to be careful of, since so many hate her so much, is saying something on the floor or to the Washington Post or to Salon.com they'll come to regret," the Republican source says. "You can easily envision some of our more rabid right-wing members saying something flippant and causing a P.R. problem for the party."

Indeed, the right wing is preparing for what Lucianne Goldberg, on her Web site Lucianne.com, calls a "Clinton Administration in Exile." "... look for Bill and Hillary to set up a de facto government in exile in New York's Westchester County -- especially if Texas Governor George Bush captures the White House," Goldberg wrote Tuesday. "With the Bushes dominating Washington's political scene once again, the Clintons can be expected to use Hillary's Senate seat as a perch from which to launch attack after attack against Republicans, on everything from pet issues like health care and education to foreign policy. If Bush should stumble at any point, look for Mrs. Clinton to take the lead as his most prominent Democratic critic. From her safe vantage point representing the nation's most liberal large state, her attacks are sure to push all the right special interest group buttons."

Hillary's election doesn't just create a problem for conservatives. It also creates a nebulous narrative for journalists trying to compose the rough draft of the Clinton legacy. While Al Gore may wind up losing the presidency to George W. Bush, Hillary, if nothing else, has preserved the Clinton legacy of besting Republicans.

"History will write various stories about the Clinton years, not one clear story," Kerrey said. "But I think the Clinton legacy is still intact. It's blemished from impeachment but still intact."

And the defeat of House impeachment managers Bill McCollum in the Florida Senate race and the expected defeat of Rep. James Rogan in California had to make this Clinton victory all that much sweeter.

But both Kerrey and Republicans agree that Hillary will have to learn how to play by the Senate's rules and traditions. "The Senate has a very strong caste system," says the Republican staffer. "Seniority matters here -- you get recognized first, you talk first at hearings. Everything goes in order of seniority."

Already, there are rumors afoot about Clinton's committee assignments. Her staff aides say she has talked openly about wanting to be on the Senate Appropriations Committee. Hill sources say everything from Banking to Commerce have been rumored as possible committee assignments for New York's new junior senator. Those are all powerful committees inhabited by the best fundraisers in both parties.

"Those are the big money committees," said one Commerce committee source.

So while she will be a Democratic celebrity, she will, in some ways, be just another junior senator. "She'll be sitting down with the witnesses at the end of the table waiting for her turn to speak," Kerrey says. "She won't have the same kind of influence she's been used to. Anyone who goes from the executive branch to the legislative goes through that. All of us who have been governors have gone through that. Everything changes. The legislative process is much more difficult."

Kerrey's statement underscores the silent acknowledgement that New Yorkers made in the voting booth -- Hillary ran as a sort of co-president, and that record was embraced by New Yorkers. While Gore ran away from Clinton and went to painstaking measures to keep the president off the campaign trail, he was Hillary's main cheerleader.

And on the stump, she ran to him. She embraced the administration's record as if it were her own. Of course, this is a state with 2 million more registered Democrats than Republicans, one that Gore easily carried. If the Clintons were truly looking for a place to cement a legacy, to minimize the risk of failure, New York was about as good a place as any to do it. So the fact that Clinton is expected to emerge with a single-digit victory here provides fodder for her critics as well.

But on this night, Hillary wasn't thinking of any of that. "Today, we voted as Democrats and Republicans," she said. "Tomorrow we begin again as New Yorkers." (Conservative commentator Mary Matalin wasn't buying Hillary's New York line, caustically commenting that "she went state shopping for a Senate seat.")

And as New York's new senator-elect made her way down her thank you list, finally getting to her daughter and husband, Bill and Chelesea Clinton, clad in marching dark suits, clasped their fingers together and gave their arms a playful little swing as Hillary sucked up the limelight.