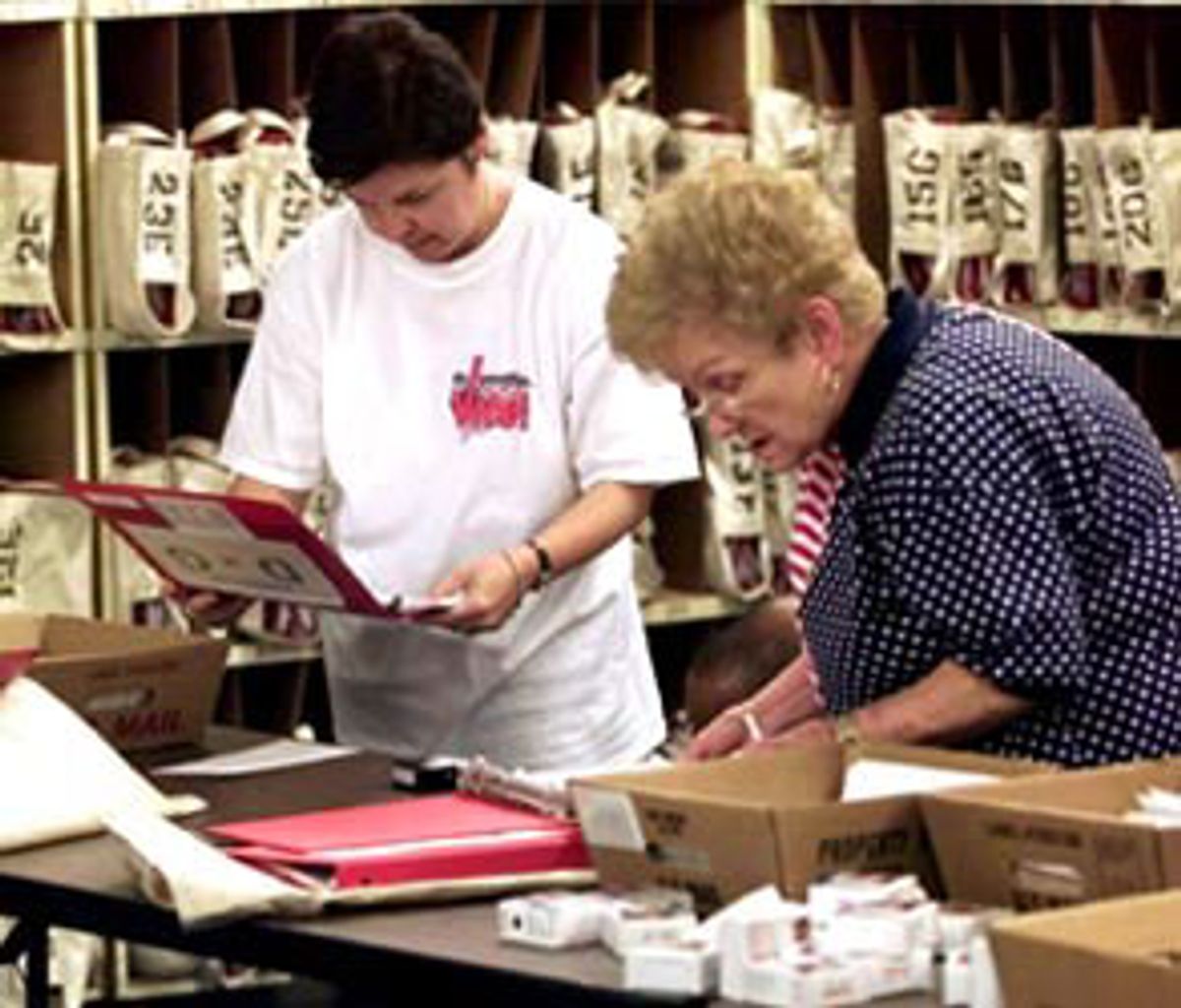 Democratic Party lawyers say the controversial Palm Beach County, Fla., ballot that listed presidential candidates on facing pages is illegal under state law, and they may ask for a new vote in the county, the Associated Press reports. The AP also reported that three voters filed a lawsuit Wednesday asking that results in the county be overturned.

The voters who filed suit were among the angry Al Gore supporters who say the ballots caused them to vote for Reform Party candidate Pat Buchanan instead of Gore in Tuesday's presidential election.

Also Wednesday, the controversy over the ballots, as well as other reported irregularities in Florida voting, prompted Sen. Bob Kerrey, D-Neb., to call for a new election throughout the Sunshine State.

"I'm still hopeful that Gore wins, but the fairest thing to do in Florida right now if they find continued irregularities ... they should organize and schedule a runoff election just for Florida," Kerrey said in an interview with Salon. "Because it's not just Florida you're talking about now, it's the president of the United States. If they don't, it will be very difficult for the country to trust the outcome."

In brief statements Wednesday, Bush cautiously claimed victory while Gore promised to abide by the final results but insisted, "We still do not know the outcome of yesterday's vote." Bush declared himself "confident that the secretary [running mate Dick Cheney] and I will be president-elect and vice president-elect."

The AP reported that some voters called the Palm Beach County election office Tuesday about the ballots, which "placed the names of Gore and Buchanan across from one another." While Gore was listed second on the left side of the ballot, the second hole punch on the ballot coincided with Buchanan's name, which was listed on the right. Gore carried the area comfortably, but Buchanan tallied more than 3,000 votes -- much higher than was expected.

Supervisor of Elections Theresa LePore, a Democrat, insisted any confusion was unintentional and defended the layout of the cluttered ballots as necessary to get all the presidential candidates on facing pages while making the type large enough for voters to read.

"I was trying to make the print bigger so elderly people in Palm Beach County can read it," said LePore.

She also said that if it was so confusing, someone should have pointed it out to her earlier. "We sent out sample ballots to all registered voters, and no one said a word," she said.

Victorious GOP Rep. Mark Foley said he had a Reform Party opponent who drew 2,651 votes, signaling support in Palm Beach County. "The allegations that people were voting in error because they were confused is nonsensical," he said.

In addition to the ballot confusion, CNN reported that a "stuffed ballot box" was discovered in a church in Dade County. It was immediately turned over to authorities, the network said.

And the strange reports out of the Sunshine State did not stop there. The Sun Sentinel in Broward County reported that four white Florida Highway Patrol troopers in North Florida set up a safety checkpoint about a mile from a Baptist church where voters in a heavily black district cast their votes. The U.S. Justice Department and the Florida attorney general's office were said to be investigating the incident after a civil rights complaint was filed alleging that the checkpoint was intended to intimidate African-American voters.

At about 2:30 a.m. EST, television networks declared that George W. Bush had been elected president, carrying Florida by a small margin. But as Bush's lead in Florida dwindled to a few hundred votes, NBC put Florida back in the undecided column, since there was to be an automatic recount. CNN followed suit shortly afterward. Florida law requires a recount when the margin of victory is less than one-half of 1 percent.

The increasing likelihood that Gore will win the popular vote yet lose the electoral vote -- and thus lose the election -- is certain to lead to controversy over the venerable Electoral College, and may spark a bitter political fight over the legitimacy of the election.

Gore, who had taken the lead in the popular vote in the early hours of Wednesday morning, had phoned Bush to tell him he planned to concede. But he called the Texas governor back and said, "It's too close. I want to retract" my concession.

"If George Bush carries Florida his first call has to be to Ralph Nader to thank him," Lawrence O'Donnell said on MSNBC. Still undecided at 5:30 a.m. EST were Oregon and Wisconsin, states where Nader was running strong. But Wisconsin slipped into the Gore column around 6 a.m., giving Gore a 260-to-246 electoral vote lead.

The late Mel Carnahan was elected to the U.S. Senate from Missouri, defeating incumbent Sen. John Ashcroft. His widow, Jean, will probably assume the seat. Carnahan was killed in a plane crash during the campaign. Ashcroft conceded Wednesday. "I hope the outcome of this election is a comfort to Mrs. Carnahan," he said.

Early results were discouraging to the GOP. "It's getting more and more difficult for the Bush team to put together a winning combination," said former Reagan aide Ed Rollins to Chris Matthews on MSNBC after Pennsylvania went into the Gore column.

Pundits had already begun the postmortems on the flagging Bush campaign. But the news that Florida was back in the tossup column tilted the momentum back toward the Texas governor.

Some Republicans had been insisting since early in the evening that the networks were wrong. "I'm going to go out on a limb ... The state's gonna flip," said Mary Matalin, referring to Florida, where half a million absentee ballots had yet to be counted. About an hour later, the networks began putting the state back in the undecided column.

Bush himself predicted late Tuesday evening he'd ultimately carry Florida and Pennsylvania. "The networks called this awfully early, but the votes coming in are telling a different story," he told reporters who visited him in the governor's mansion in Austin, Texas. "I don't believe they've got enough evidence to call these states ... I think America ought to wait until all the votes are counted."

The Florida flip-flop was embarrassing for the networks. CNN pundits were busy defending the network's methodology from the Bush campaign's charges when the news came in that Florida was being put back in the undecided column -- the first time. Over on MSNBC, Brian Williams was explaining why his network was staying with Gore when a decision was made to move Florida out of the vice president's column.

Gore had earlier won the key swing states of Michigan and Pennsylvania. Labor was getting early credit for Gore's Michigan victory. The United Auto Workers got Election Day off in its last contract, and some pundits thought that may have given the vice president the edge. High black turnout in Pennsylvania -- the Rev. Jesse Jackson made a last-minute visit Tuesday -- was thought to have boosted the Democrats' totals in the Keystone State.

As momentum seemed to shift back to Gore, things got surreal on the networks. "Alice in Wonderland" was a favorite motif. "I hope history teachers and civic teachers are up at this hour; every teacher in the country should tell every child in the country that every vote counts," said Dan Rather. "You can't just say, 'Well, I'm too busy.' When the going gets weird, anchormen punt," Rather concluded.

The networks are girding themselves for criticism of the decision to call individual races, and the presidential election, before accurate results were in. "I think it's time for the networks to stop calling the election on the basis of exit polls and sample precinct analysis," Curtis Gans of the Committee for the Study of the American Electorate told CNN Wednesday morning.