Behind every dead candidate ...

There lurks a mysteriously qualified understudy ready to take the stage in the name of duty. 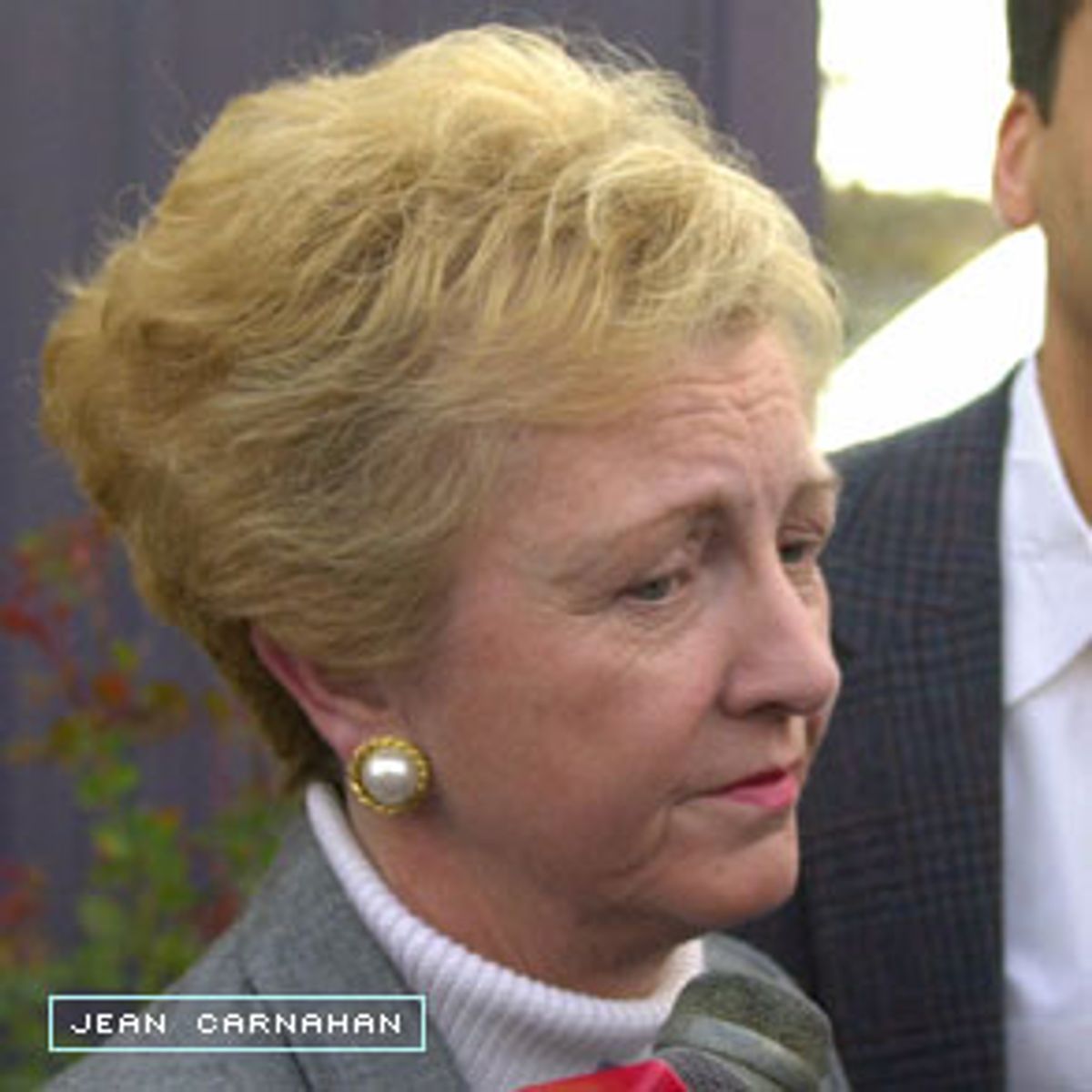 That's the morbid text of the lapel buttons that supporters of Missouri's late Gov. Mel Carnahan wore during the last weeks of the dead man's campaign for the Senate. He won from the grave, seemingly arriving as a corpse (and a Democrat) at the congressional finish line.

Ghoulish or not, "I'm still with Mel!" has a better ring to it than "Better dead than Ashcroft." As we are now well aware, Sen. John Ashcroft, the Republican contender, found himself in the untenable position of campaigning against a man who had literally died trying to win office, perishing in a campaign plane crash that also ended the lives of his eldest son, a political advisor and the pilot.

But what "I'm still with Mel!" actually meant was "I'm now with Jean!"

By the time Missouri voters cast their votes for senator, they knew that they weren't really electing a deceased man to office. They were casting a ballot in favor of his wife of 46 years, Jean Carnahan. The state's new governor, Roger Wilson, had pledged to appoint the widow should Mel Carnahan be elected, and Jean Carnahan had agreed to accept the job should she be appointed.

Whoa. Since when does a woman get such a free ride into any job, much less one of the highest offices in American politics, waltzing onto the floor of the Senate without any scrutiny of her record, experience or qualifications? Answer: When her husband dies.

The idea that widows would automatically serve in their husband's stead may seem archaic, if not downright Victorian or fictional, but in fact some 44 women have succeeded their spouses in Congress since 1923. Seven Senate wives have finished out their dead husband's term in office, but never has a wife gone on to serve in the Senate in the place of a man who never spent a day working there, as Jean Carnahan will if, as expected, she takes office.

Riding a wave of sentiment following their governor's tragic death, voters have handed Jean Carnahan a job that her husband never held while she was married to him, basically bestowing upon her all the respect and authority he had earned in his political career as governor. It's the legislative equivalent of that hackneyed throwback, the voting booth shuffle, where the dutiful wife, a politically empty vessel, waits patiently for her husband to finish casting his ballot and hand her the list of how she should vote before she takes the plunge. But now the scenario has reversed: We're to picture Jean Carnahan channeling her deceased spouse, pondering, for lack of prior political experience: "What would Mel do?"

The idea that a woman can be a proxy for her husband did not sit well with some voters. "If my doctor died, I wouldn't want his wife to operate on me," said one disgruntled Missourian. But Democratic supporters made haste to cast Jean Carnahan as the equivalent of her husband, a female "next best thing."

"Jean Carnahan is an incredibly strong and capable person who was universally recognized as an equal partner with Mel in his career," Vice President Al Gore said, calling her the late governor's "equal in strength and intellect and stamina and contribution."

Carnahan may be as capable as her late husband, but her experience does not extend beyond the narrowly subscribed role of political wife, an elevated domestic icon expected to keep quiet about the issues or face a backlash like the one Hillary Rodham Clinton suffered for her early "two for the price of one" role in the Clinton White House.

Carnahan has taken up certain pet causes, like raising funds for Habitat for Humanity, for a rape crisis center and for domestic violence victims. And she's the author of three coffee-table books, including one of the history of Missouri first families called "If Walls Could Talk." But these accomplishments are not exactly a résumé for political office.

Still, the executive director of Missouri's Democratic Party, Roy Temple, defended Carnahan and the idea of a political wife as proxy: "You're talking about a legislator, which is really about where your heart is, and Jean Carnahan's heart is very much in the same place where Mel Carnahan's heart was, and that's really what the choice is about on Nov. 7."

In other words, vote for Jean Carnahan because her heart's in the right place.

Of course, many voters may have elected to go with Carnahan because they believed that her views would certainly be closer to Mel's than those of his conservative opponent, sort of a "Better wife than Ashcroft!" approach that is not without its merits.

And Carnahan did mention to Cokie Roberts in an interview that she shared her husband's views on most issues. She also insisted that she wasn't simply a repository for his wisdom: "I think perhaps being a woman, I would have an additional commitment to some things involving women. I'm very concerned about our breast cancer research, pay equity, child care -- those sorts of things." (Not coincidentally, Carnahan granted the single interview before her presumed election to Roberts because Cokie's father was lost in a plane crash and her mother subsequently ran for and won his seat in Congress.)

But whatever Jean Carnahan's legislative record may turn out to be, the idea of a wife serving for her husband plays into our most dated notions about what a wife is -- a legal pinch hitter who embodies her husband's ideals and views, who lives to carry out his will when he cannot.

Think of the scrutiny that Hillary Clinton went through in her mudslinging quest for a seat in the Senate. Would she have been better off wishing that Clinton had gotten so excited that he'd expired during his assignations with Monica Lewinsky? (Oh yeah, succession in the executive branch goes to the vice president, not to the wife, as it apparently does in Congress.)

How ironic that a woman like Carnahan can ride into Congress through the sentimental surge of support following her husband's tragic death, while most female candidates have to fight tooth and nail to get there on their own.

Maybe it's time to start keeping a closer eye on which political wives take out insurance on their husbands.