The business of breast cancer

Big medicine is making big bucks on the disease, but we're still far from a cure. 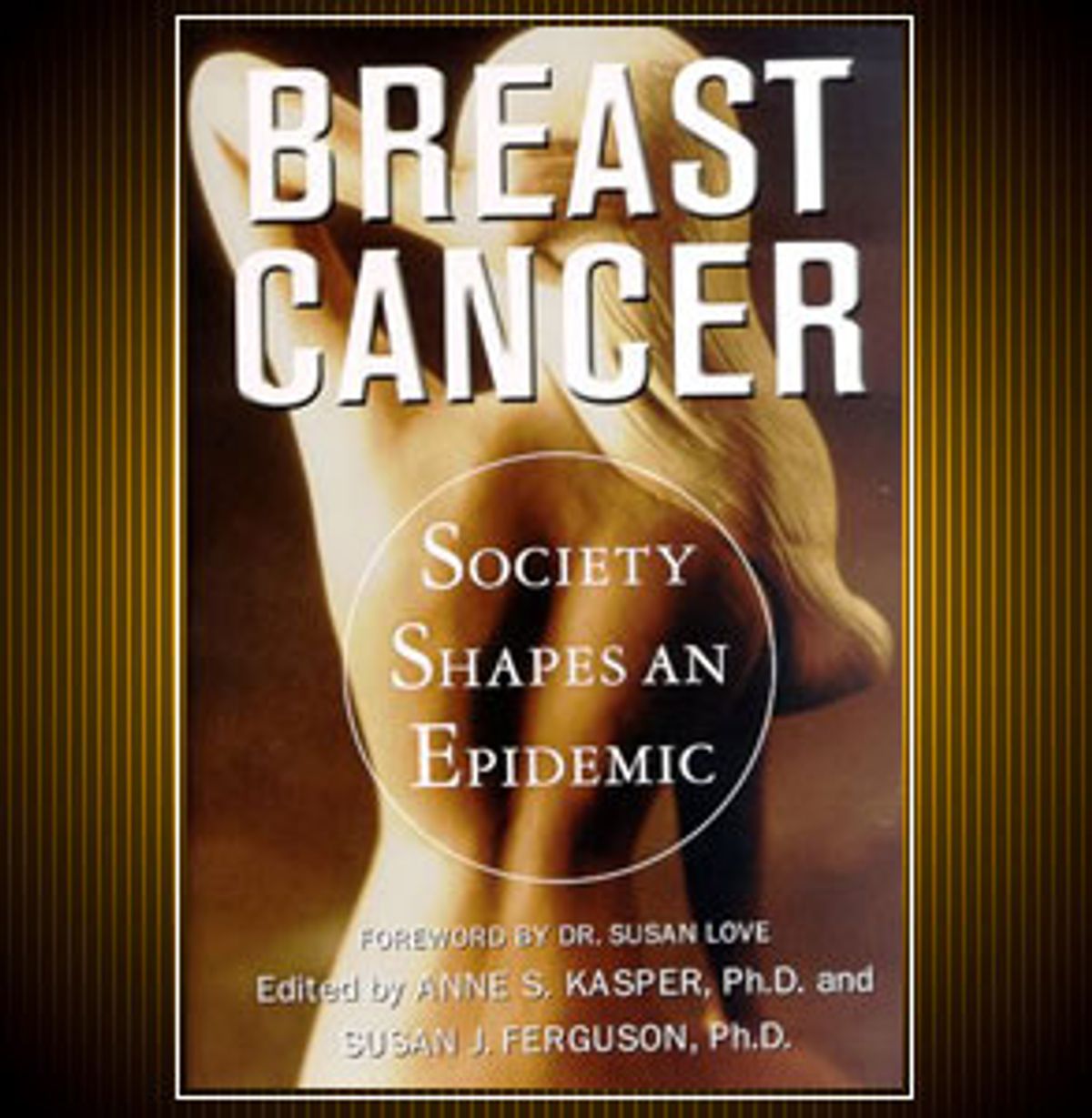 After reading "Breast Cancer: Society Shapes an Epidemic," my heart went out to those hundreds of thousands of women who walk or run to raise funds for breast cancer and hold out hope that we are getting closer to preventing the disease altogether.

As the authors of this important collection of essays see it, these activists are just cogs in the misguided breast cancer industry wheel, raising funds that are ultimately directed -- misdirected, that is -- to the interests of big business rather than to those of women themselves. These women will probably be discouraged to read that although progress has been made in treating breast cancer, we are not anywhere near finding the cause.

The contributors -- scientists, sociologists, public health specialists and activists (13 female, one male) -- do give a nod to recent advances. Funding for breast cancer research by the National Institutes of Health rose to more than $600 million in 1999, up from just $90 million in 1991. Women participate more actively in decisions about their medical care, more of them receive breast-conserving lumpectomies than in the past and survival rates have gone up. And some women's advocates have made it onto important policymaking panels.

But the authors spend most of their time hashing out the societal, social and scientific problems surrounding breast cancer. Unfortunately, they write in a consistently academic tone that weakens their message and may make the book less compelling for the layperson whose attention they appear to be seeking.

The prevailing gripe of the book, which is repeated ad nauseam, is that the majority of the funding is channeled into research that focuses on a biomedical approach to preventing and treating cancer (genetics, chemotherapy and surgery), rather than research that examines the environmental factors, like pollution and toxic waste, that these authors believe contribute to breast cancer.

"Efforts to encourage research and advocacy into possible environmental causes -- including corporate pollution -- have met with stiff resistance and meager funding, not to mention potential conflict of interest," writes sociologist Jane Zones in her essay "Profits From Pain: The Political Economy of Breast Cancer." Another writer cites studies that indicate links between breast cancer rates and hazardous-waste sites, industrial pollution, pesticides like DDT, chemicals like PCBs (an organic chemical used in industry) and products like polyvinyl chloride (known as PVC or vinyl). Although she picks and chooses studies that support her position, the evidence is compelling enough to make an effective case for further research.

Several authors contend that society shirks its responsibility for preventing breast cancer, placing it instead on the individual woman -- from her diet to her genes to her reproductive life. In an essay on women's magazines' coverage of breast cancer, three coauthors write, "Ultimately, the magazines send the message that women can locate the causes of breast cancer in either their lifestyle behaviors or in their bodies. Breast cancer then becomes a personal problem rather than a social issue."

In the meantime, big business, absolved of guilt, can rake in the bucks. Cancer, writes Zones, "has many profit centers -- detection, treatment, prevention and even advocacy." For instance, radiologists, the authors say, have a financial interest in pushing mammography and have been a force behind screening recommendations that some advocates think are overzealous, especially for women in their 40s. Likewise, drug companies launch major public relations campaigns promoting their breakthrough drugs, often exaggerating the benefits and minimizing the risks. Just look at the media frenzy that surrounded the prevention drug Tamoxifen in 1998, despite serious side effects like increasing the risk of uterine cancer.

Genetic testing, a potential gold mine for biotech companies, has become a "centerpiece in prevention," although only 5 percent of women with breast cancer have mutations in the genes and there are no good prevention options for women with the mutation. The authors aren't suggesting that genetic testing, drugs and mammography haven't helped women, but they do believe that the interests of women are not always at the top of the agenda when agencies make policy and funding decisions. Moreover, they add, the influence of money is insidious, with drug companies' funding of cancer organizations and advocacy groups influencing their messages and agendas in subtle ways.

Breast cancer has gained political cachet as well, and although that certainly has benefits in terms of boosting funding, it can distort decision making over medical issues. If it's true that just about every woman (I mean voter) knows someone with breast cancer and many fear getting it themselves, it's easy to understand how the disease became a bipartisan issue for legislators and an opportunity for politicians to garner the female vote. When an NIH consensus panel concluded that there wasn't enough evidence that mammography for women in their 40s saves lives and advised women to come to their own decisions about when to get screened (a less clear-cut but, some say, responsible recommendation given the evidence), there was an uproar among politicians.

In her essay, Carol Weisman, professor of health management and policy at the University of Michigan School of Public Health, writes, "In statements for the Congressional Record [Sen. Arlen] Specter made it clear that he urgently wanted a recommendation endorsing screening for all women in their forties, and he was in a position to pressure NCI [National Cancer Institute] for this result because of his power to endorse or oppose budget increases for the agency" (via his Subcommittee on Labor, Health and Human Services and Education Appropriations). A few months later, the NCI recommended screening every one to two years for women in their 40s. Scientific organizations that determine policy, writes Weisman, were pressured by politics to change positions that were initially based purely on scientific research.

The book's authors are equally indignant on issues like the effects of poverty and of being uninsured on how women are treated for breast cancer, how the paternalistic field of medicine influences personal decisions such as getting breast-conserving or reconstructive surgery and how the breast implant industry and cosmetic surgeons, by promoting implants, are responsible, one author contends, for making women feel that they're disfigured after mastectomy. Though her arguments are interesting, placing the blame on others seems to ignore the possibility that a person might naturally feel disfigured after a body part is removed.

The most compelling essay, and the one that may personally resonate with readers, discusses how women with breast cancer are forced, as never before, to confront and struggle with cultural values and sexism. It describes three women's struggles to reject society's view that women without breasts are less feminine and less worthwhile than those with (preferably large) breasts.

According to one study cited in the essay, about one-quarter of women with breast cancer rejected equating breasts with femininity and self-worth, even though they found it very difficult. Bravo for them, but what about the 75 percent who didn't? They must add diminished self-esteem to the list of pain and insults they've endured since being diagnosed with breast cancer. Women also have to contend with other unhelpful societal notions: that women should not burden others with how truly difficult it is to deal with breast cancer and, as a corollary, that being a warrior-survivor, an optimist, is the only appropriate way to cope with the disease.

The book comes to life in the few moments when the authors focus on individual women and their plights, but they generally fall short of touching the emotional nerve that might incite people to take the actions they're calling for. And by tackling all the wrongs of the healthcare industry, the breast cancer industry and general feminist issues, the book may leave some readers feeling more daunted then empowered.

That doesn't mean it's not an important read for women and advocates. It's just depressing compared with all the upbeat cancer-breakthrough books and reports we're used to reading -- another gripe of the authors, in fact. "Magazines emphasize positive thinking and optimism as more appropriate responses to illness than are complaint, anger and fear," declares one essay. These authors, on the other hand, want you to get obstreperous -- and mad as hell.

Laurie Tarkan is the author of My Mother's Breast: Daughters Face Their Mothers' Cancer