The cult-favorite Web site spawns a book memorializing the kind of people who meet their maker at hurricane beach parties. 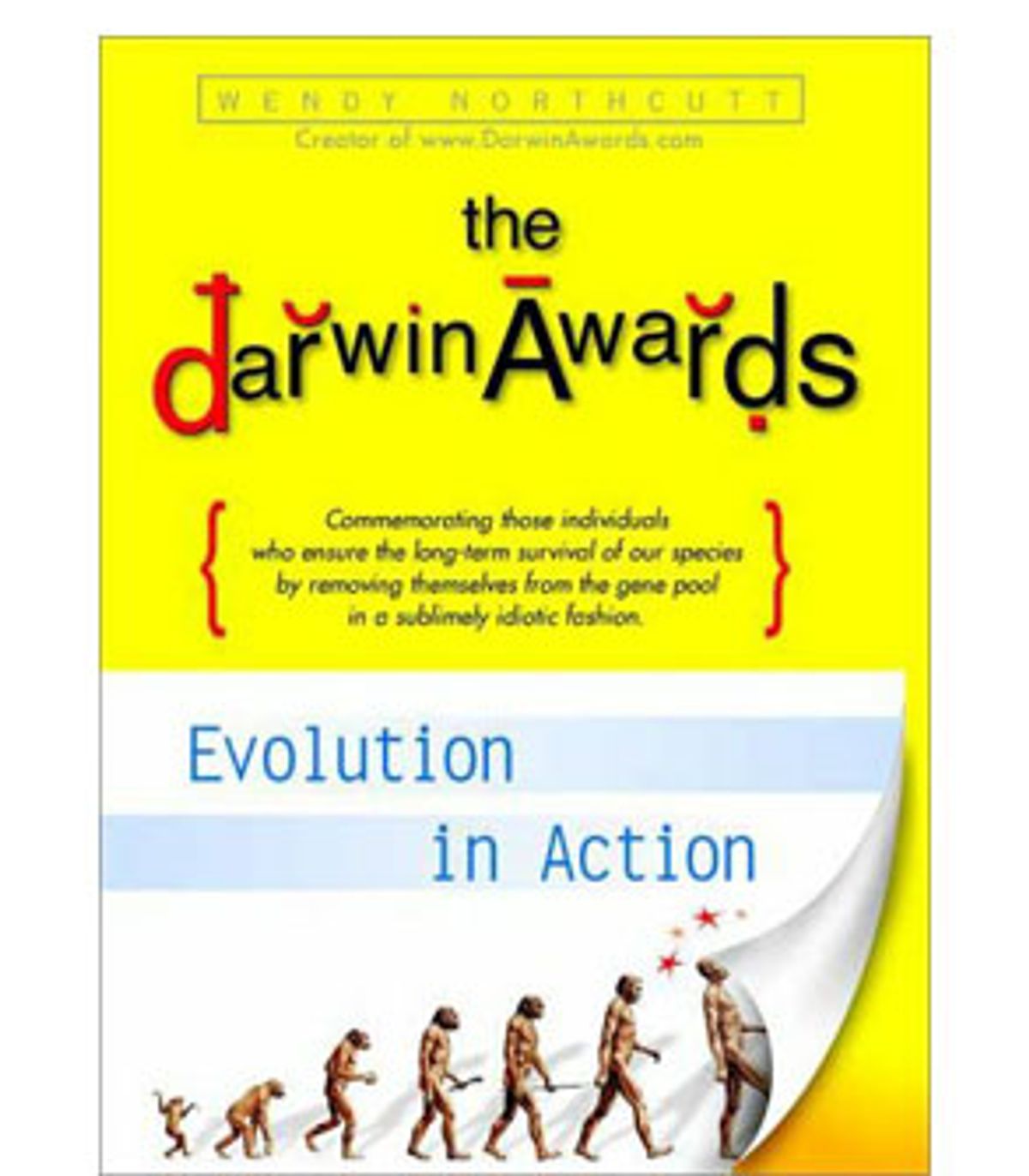 It's discomforting to know that if a bizarre death should befall you as a result of your own idiocy, strangers might immortalize you for the klutzy ignorance, out-of-control testosterone or incapacitating inebriation that caused your demise. While friends and family weep at your funeral, connoisseurs of extravagant deaths from Indiana to Indonesia might be giggling at their laptops over your fate, warmly thanking you for having removed yourself from reproductive contention. Wendy Northcutt, a University of California at Berkeley-educated molecular biologist, has gathered almost 200 stories of deadly human folly for her new book, "The Darwin Awards." As Northcutt quotes a Stephen Wright aphorism, "The problem with the gene pool is, there's no lifeguard."

The Darwin Awards, which began as an Internet phenomenon in 1993, are in a way a strange testament to human evolution: Not only are some of us superior beings "bewilderingly unable to cope with the obvious dangers in the modern world," but others, the survivors, serve up funny awards for the morbid achievements of those who turned out to be less well adapted. Only human beings, after all, could be simultaneously capable of self-destructive stupidity and comic self-reflection.

So, a warning to all dimwits: Be aware that should you decide to peer down the barrel of a gun while your lighter flames against the gunpowder, or throw a stick of dynamite while your faithful Labrador retriever sits beside you, your death might merit a Darwin Award or, if you live, an honorable mention.

Of course, Darwin Award proponents don't advocate warnings of any kind -- they want serious contenders to buy the farm in an innovative fashion, and as soon as possible. Read the book and this macabre attitude becomes understandable. It's mind-boggling how many people throw the pin but hold onto the grenade. Many of these subjects might have enjoyed fine and lucrative careers as performance artists. Unbeknown to them (which is the beauty of it), killing themselves is their art, and the act includes everything from hosting a hurricane beach party to leaving unfed a pet Burmese python to nibbling off an exotic dancer's sequined pasties -- and choking to death on them.

And Americans aren't the stupidest people on the planet after all. Darwin winners hail from all over the globe (though I did notice that Michigan, alcohol and below-average temperatures seem to be a particularly dangerous combination). One Darwin statuette was awarded to a German hunter who was shot dead by his own dog after he left the playful pooch alone in the car with a loaded gun -- pointed out the window. And six Egyptian citizens won a prize for attempting to save a chicken that had fallen into a well. All six drowned, but the buoyant chicken was pulled out alive.

Other recipients have been criminals, such as the honorable-mention British thief who evaded security at a hospital only to happen upon a tanning bed and decide his skin could use a browning. The poor, pale bloke, never wondering why a hospital would keep a tanning bed, didn't realize that the high-voltage ultraviolet machine was meant for burn victims. When he broke into blisters, he fled to another hospital wearing a stolen hospital jacket and was quickly apprehended (after treatment). One of my other favorites is the dingbat who tried to rob a Nashville restaurant by sliding down an exhaust chute. The tubby robber didn't fit, so he got naked and tried to shimmy down. Unfortunately for him, his arm got caught under his chin, and he smothered himself. This story is unconfirmed, as many of the tales are, but I'm captivated by the image of the restaurant's workers shuffling in the next day to find a pair of naked, hairy legs dangling inches from the griddle.

Northcutt's book also glosses the stories with handy bits of scientific information that could help you avoid a Darwin-esque fate. If you're confronted by an Amazon anaconda, for example, don't follow the purported advice of a Peace Corps manual to lie still and allow the snake to get started on your feet -- 99 percent of the time, these snakes swallow from the head down. Northcutt also lets readers in on the "Philosophy Forums," where voters debate the stupidity quotient of how someone kicked the bucket. John F. Kennedy Jr. was once a nominee, and a heartfelt deliberation ensued via e-mail. Because Northcutt felt his death was merely a lapse of judgment, John-John was spared a Darwin.

One of the greatest pleasures of the collection is scanning the index, which runs from "A literal fountain of cess" to "Yosemite National Park" -- a glittering cache of improbable causes of death. For the most part, the stories are easy to digest because the victims are virtually anonymous. Once in a while, though, a certain story struck me as more sad than idiotic, and I felt a little guilty mocking it. (Northcutt advises readers not to read the book in one sitting; I think this may be why.) Take the story of Andrew, who, while fighting with his young son over a missing container of chocolate cake icing, thrust a knife into the kid's hand and challenged him to take a stab. The dad's last words were, "Would you believe the kid did that?"