Sick on the beach

When you have no vacation days left, it's time to kill off beloved members of your virtual family. 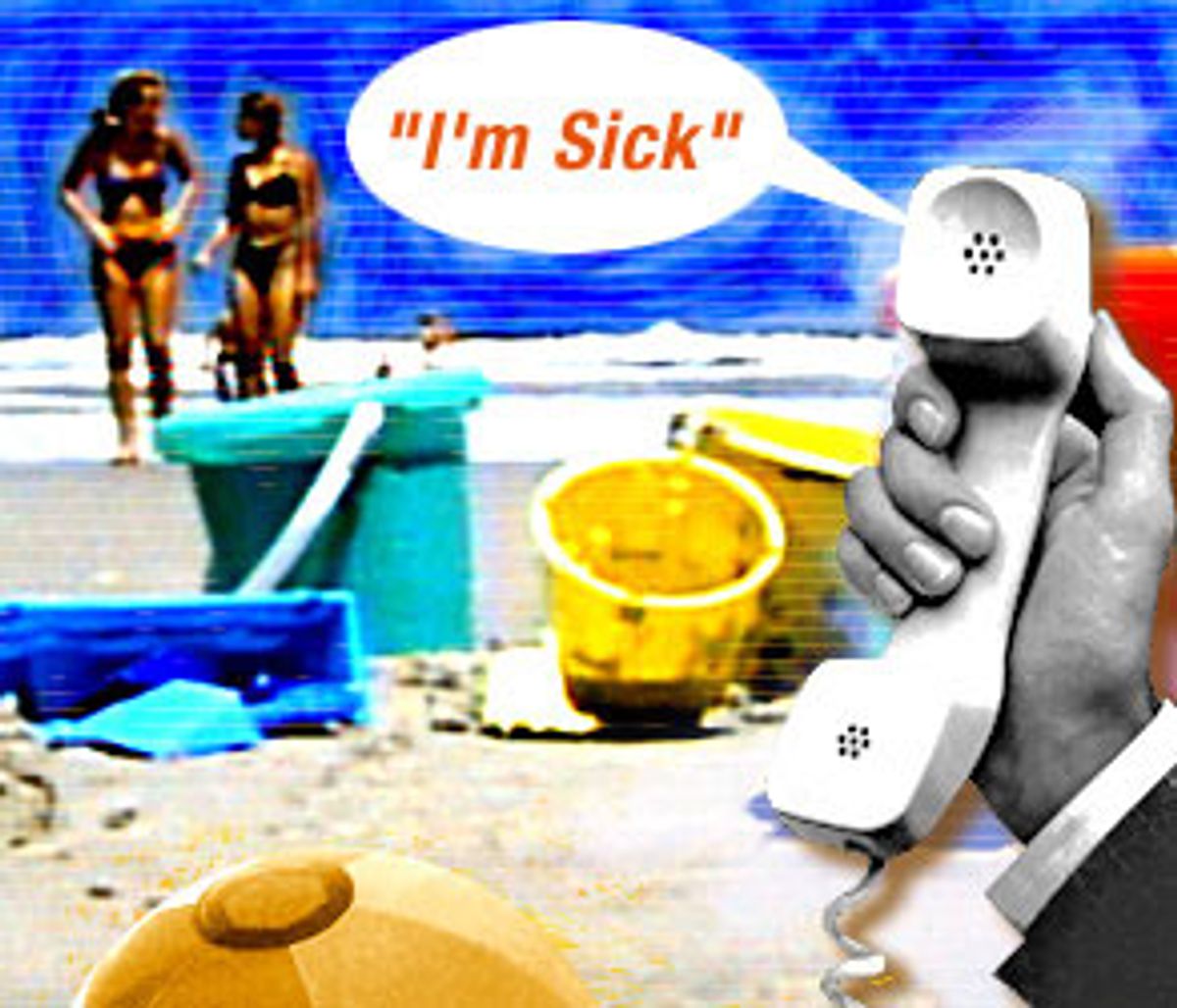 It's flu season again! And not a moment too soon.

Warning: This essay is not intended for those of you who think that leaving work at 8:30 is "sneaking out" or who stop by the office on Saturday for "just" six or seven hours because "it's so much easier to get work done when it's quiet."

This essay is for those of us who spend a significant portion of our workday reading and rereading the company's human resources literature, trying to pinpoint loopholes in office policy. (If I need to recover from a paper cut trauma, say at a little spa in Antibes, France, can I get a paid leave of absence plus expenses?)

This essay is for those of us who constantly deal with Vacation Days Envy whenever we meet Scandinavians who tell us how people in their country get nine weeks of vacation a year. It's for those of us who know that there's a prize known as "Sick Days" just an arm's length away. Ten more days in the sun. Ten more days in bed watching "Martha" and "Oprah" and "Ricki." Those days are there for us, like a golden promise, like an ornately wrapped gift that takes some skill to figure out how to open but, once you do, is all yours.

First, let me say that I've seen firsthand the deleterious effects of excessive corporate dedication. A friend of the family's -- let's call her "Aunt Wanda" -- was an office manager for a janitorial supplies company for 17 years. Aunt Wanda was always the one who arrived late to weekend barbecues. (She had to stop by the office to sign a few "req" forms.) She called in sick only twice in those 17 years (once for an emergency appendectomy and once when her schnauzer died). And she could tear herself away for only one week of vacation a year, so ultimately she had accrued 129 days of paid time off.

Aunt Wanda lived in that office and, unfortunately, she died there too. She suffered a heart attack while scarfing down her lunch at her desk. While she waited for the ambulance to arrive, she signed the week's payroll, typed a memo about the upcoming blood drive and color-coded and cross-referenced her L-to-R files.

So calling in sick is easy, right? Why read an essay on it? Perhaps because doing it the wrong way can be disastrous. Take the following as a cautionary tale. A woman I know -- "Alana" -- called in sick recently because her beloved husband, "Ben," had the flu and she needed to nurse him back to health. Unfortunately, Ben -- a school bus driver -- was returning home from his morning route and decided to make a surprise visit to his wife's office to give her a kiss. Bad call, Alana!

So let the PowerPoint presentation begin:

2. Should I feel guilty for calling in sick when I'm not really sick?

God, no. When you start feeling guilty, ask yourself this: Do corporations ever feel guilty? Do heads of conglomerates lose any sleep after they inform the office that there will be no pay raises this year and that the office Christmas party, usually a sit-down, five-course affair with an open bar at the swankiest hotel in town, is going to be a BYOB at Paul's Pulled Pork and Ribs? I don't think so.

3. Any advice for those of us who are supposed to be ill but won't actually be home?

Yes, two things. First, the phone company has a wonderful service called remote call forwarding. It won't tell you this, but I'm certain it was invented for the sole purpose of calling in sick. With RCF you can have your phone calls forwarded to almost anywhere in the world. So if your boss, or that office kiss-ass, decides to call and check up on you ("Funny, he didn't seem sick at the sales meeting yesterday"), you can confound either of them by picking up the phone.

Second, if you won't be near a phone, I especially recommend changing the outgoing message on your voicemail or answering machine. (I know it's time-consuming, but think of those hours you're saving by not being in the office.) Example: "This is Eleanor. It is Tuesday and I'm sick today. I'll be at the doctor from approximately 10 o'clock to 12 o'clock and I won't be checking my messages." Then, around noon, call in and change your message: "This is Eleanor, and my condition has worsened. I'm now sick as a dog. I'll be getting a second opinion from 1 o'clock till 2 o'clock, then I'll be at the gastroenterologist's office from 2:30 till 4 and then at the pharmacy till after 5. And I won't be checking my messages."

4. I flunked drama class and I'm a disaster at pretending to be sick. (My "I've got a cold" voice has been compared to Pee-wee Herman's voice.) Any suggestions?

Yes. Most companies offer the possibility of "family illness" days, which you can use if you're lucky enough to have a close relative who's under the weather. These come out of your own sick-day pool.

5. What if my relatives don't want to have anything to do with it?

To be perfectly frank, I'm not sure you want them to be involved, anyway. Another acquaintance of mine took several sick days in Hawaii when her grandfather died. Boy, were her co-workers surprised when the dearly departed walked her down the aisle at her wedding. A senseless error. This is why I can't stress enough the importance of establishing a "virtual family" -- aunts, uncles, grandparents who don't actually exist.

6. When should I begin to think about starting my virtual family?

It's never too soon. And if you've already been in your current job for a while, it may already be too late. I'd suggest that you map this out before starting your first day at the office. Draw up a virtual family tree for yourself. Come up with names and a few vital statistics. Clip out photos from your mail-order catalog to create visual representations of your new relatives.

Then practice by casually dropping the names of these virtual family members in office conversations. ("Oh, my God! My Aunt Vidalia has that exact same fig-green winter fleece V-neck!" "What's that you're eating? No kidding? My Uncle Herve loves pimento and cheese spread on Ritz crackers too.") This way you'll train yourself to believe in your virtual family and your co-workers will gain real familiarity with the players. (A friend last year did this too well. His sweet-tempered virtual Nanna received several elegant Christmas presents from his co-workers.)

After you finish your family tree, you need to diagnose each of them with an illness that leaves open the possibility, even the certainty, of eventual progression. (Uncle August is the one who starts out scatterbrained and is eventually diagnosed with dementia. Aunt Tallulah has that mole on her back that you've been warning her about for years.)

Remember that your virtual family is an investment that pays off over time. You need to continue the thread of your virtual family throughout water cooler conversations. ("I guess I'm feeling down today because Uncle August's colitis took a turn for the worse this week.") Then, usually toward the end of the year, after you've used up all your vacation time and you know you're going to go crazy unless you get your ass out of town, it is time to unload someone in your virtual family tree.

There is one possible downside I should mention. Strangely enough, you may find that you've become attached to your virtual family. You may feel depressed after they've all passed away. This is normal. But remember, just because your family member isn't real doesn't mean that you can't mourn him or her. Still, it is important to deal with your feelings and move on.

My friend Karen developed an extremely close relationship with her virtual Aunt Rubia, who had arrived from the old country, spoke mostly in some odd Slavic language and often smelled of obscure, damp herbs and seasonings. My friend had seen Aunt Rubia through a series of harrowing ailments, including a hip replacement after a nasty spill in a seniors water aerobics step class, several strokes, diabetes, Lyme disease and sudden unexplained blindness.

Karen successfully milked Aunt Rubia's illnesses for two years, using all of her sick days to help the poor thing through her unlikely list of disorders. Finally, with all her sick days gone and the opportunity to go with a friend on a free Big Bear ski trip, it was time to say "do svidanya" to dear Aunt Rubia.

Two years later, Karen still hasn't recovered. She called me up the other night, begging me to come over. I found her crying in her rocking chair. "I just miss how she used to sit me on her lap and tell me folk tales from back home," she sobbed.

I tried to remind Karen that there were no stories and there is no "back home," but it didn't seem to help. "She understood me in ways that my real family never did," she sniffled. All I could do was pull Karen into my embrace and, in my most comforting voice, acknowledge that maybe she was right.

David Vernon is a writer of fiction and screenplays. He's currently finishing his first novel, a fictionalized version of his experiences growing up as the son of a comedian.