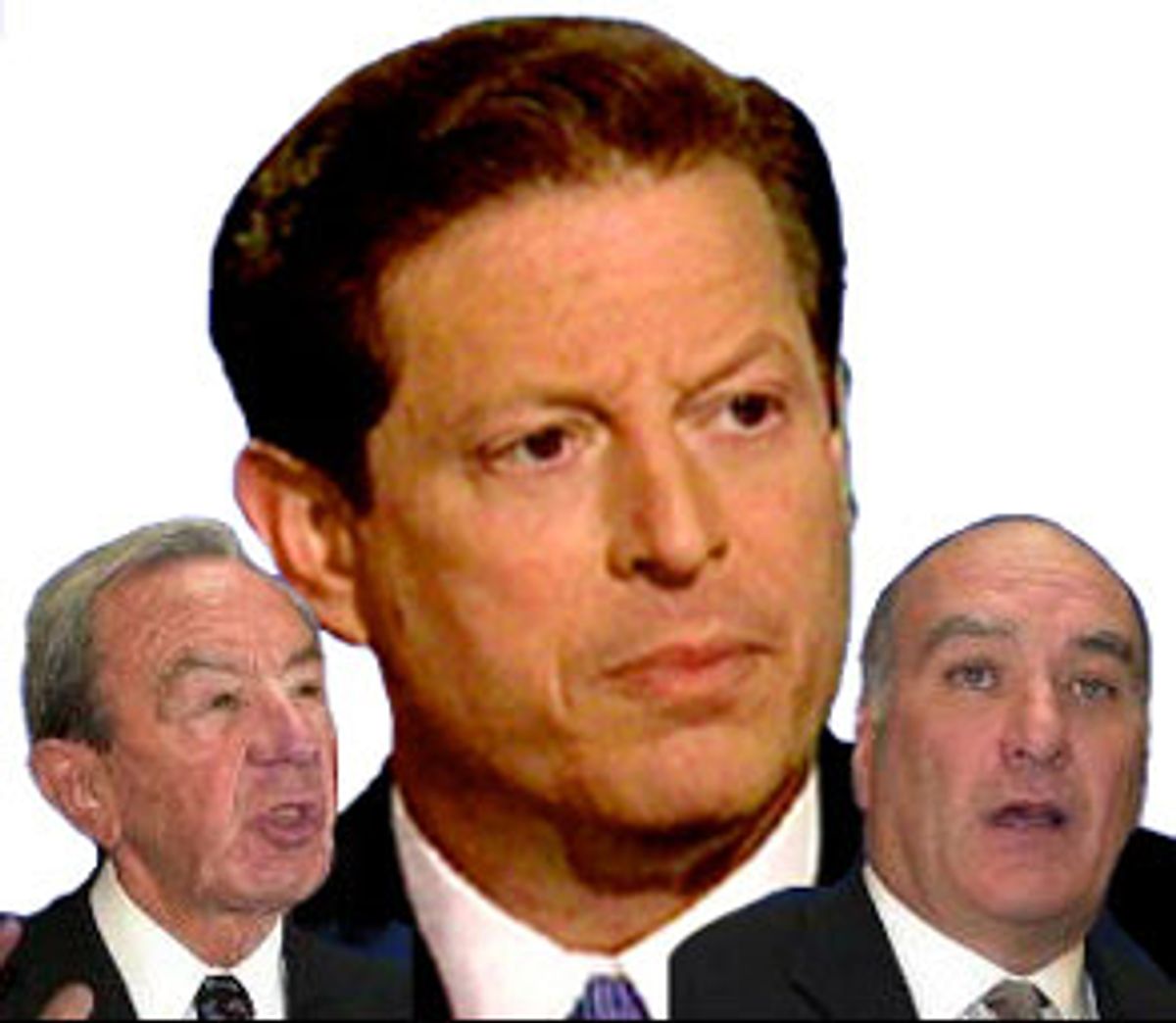 On Friday, Gore spokesman Douglas Hattaway told CNN, "The campaign is over." And while, technically, the campaign to elect Al Gore president has officially been disbanded, a new campaign has replaced it to win the increasingly vicious contests in the courts and the court of public opinion.

Gore has moved with speed and seriousness to deploy a staff here and in key spots in both Florida and Washington, where this new campaign is being waged. Replacing the official Gore campaign, which ended Friday, is the Gore Recount Committee, a separate entity allowed by federal laws that provide campaign committees an opportunity, if necessary, to fund a group to work on recount efforts.

And based on a draft memo from Thursday obtained by Salon that outlines the committee's various functions, as well as conversations with members of the Gore Recount Committee, this group means business. The memo even talks about a "war room," after the famous command center of the Clinton administration immortalized in the documentary of the same name.

Committee officials insist they're just a short-term operation, saying their canvassers have told them that the election should all be over by this time next week, that after the hand-counting of the ballots in the heavily Democratic Palm Beach, Broward and Volusia counties, Gore should win.

But since, they argue, no one knows exactly what the overseas absentee ballots will bring, the infrastructure they're setting up right now could allow activities beyond the last deadline for votes in the primary -- the last day for absentee ballots, Friday, Nov. 17. This could allow the Democrats to continue to wage a political, legal and public relations battle based on the "uncounted" Palm Beach County "butterfly ballots." Or, as Bill Daley, Gore's campaign chairman and co-chair of the recount committee, alluded to in a press conference Thursday, it could allow the Democrats to challenge other voting controversies in parts of Florida where questions remain over whether ballots were fairly counted.

"Al Gore won the popular vote, and he's ahead in the electoral college vote," says Mark Fabiani, who ran the communications team for the Gore campaign and will do so for the recount committee. "It's clear from all the evidence that he won the most votes in Florida. We're determined to have those votes counted in a speedy and correct manner ... Hopefully, it's not going to be a very prolonged battle. We hope with a speedy recount, Al Gore will be ahead this time next week."

But what if he's not? Will the recount committee seek a revote in Palm Beach County, claiming -- as they have already alleged -- that the ballots are illegal?

"We're taking this one step at a time," Fabiani says.

With the short-term target in mind, but a long-term war a possibility, the Gore recount committee has dispatched key members of the Gore campaign -- working with others from the Democratic National Committee -- to Palm Beach, Tallahassee and Washington. The infrastructure and organization of this team, not to mention the funds necessary for its day-to-day operation, underscores how tenaciously Gore intends to challenge the results of the controversial, razor-thin and still as yet uncertified victory of Gov. George W. Bush in Florida.

The operation will be co-run by Daley and former Secretary of State Warren Christopher. Though both men returned to Washington for the weekend, they will continue to be based, initially, in Tallahassee, where the three-person elections certification committee -- which consists entirely of officials who endorsed Bush -- is supervising the state's automatic recount.

Lastly, David Ginsberg, head of the Gore campaign's research operation -- infamously referred to once by Brazile as its "slaughterhouse" -- is heading a small staff in Washington that will conduct research to back up claims for their case and to refute ones made by Bushies, who no doubt have a similar operation set up.

On Friday afternoon, New Mexico became "too close to call" and was taken off Gore's "win" list. A few hours later, it was reported that Gore won Oregon outside the margin that would call for an automatic recount. Gore's Iowa and Wisconsin margins of victory are small enough that if Bush so desired, he could request a recount -- a threat that Bush's man in Tallahassee, former Secretary of State James Baker, hinted at on Friday.

Despite Fabiani's claim that this could all be over by next Friday, the team is clearly planning for contingencies. Gore pal and lobbyist Peter Knight, for instance, will head efforts to raise $3 million for the recount committee. "That's not much of a challenge from a fundraising point of view," Fabiani says. "People are very supportive of the vice president and want to help him with this."

An army of lawyers

The bulk of the $3 million will be devoted to the team's legal efforts. Christopher will helm the legal team, which will be coordinated by Bob Bauer (who, oddly enough, once played the role of Gore for former Sen. Bill Bradley in Democratic primary debate prep). Bauer also helped Sen. Mary Landrieu, D-La., in her efforts to slap aside GOP challenges to her slim 1996 Senate election victory. Former Gore chief of staff/campaign rapid-response chieftain Ron Klain will also help run the team, working with Christopher.

But many of the tasks for lawyers working on the recount committee don't seem to be in the game plan for the coming week, but rather maybe for some time in the future.

The Florida unit of the legal team will be coordinated by Kendall Coffey, a former U.S. Attorney who helped Joe Carollo unseat Miami Mayor Xavier Suarez in a 1997 vote fraud trial. Different attorneys will coordinate different tasks: Attorneys Chris Souder and Jack Young will supervise the recounts by hand in certain counties; Kathy Wallman, former head of the Federal Communcations Commission's Common Carrier Bureau and a former White House attorney, will helm the affadavit collection from voters who feel disenfranchised; and DNC general counsel Joe Sandler will be on the absentee ballot effort.

Fort Lauderdale attorney Henry Lattimer will be in charge of civil rights work, focusing on allegations by the National Association for the Advancement of Colored People and other civil rights groups that black voters were intimidated and thus kept from voting because of their race. Another attorney, Mitchell Berger, a Gore pal and Fort Lauderdale attorney, will help coordinate relationships between the legal team and other independent parties who have filed suit and claim their voting rights having been impeded.

Whouley, from Boston, was the staffer who stopped Gore from conceding to the country since the Florida tallies were -- despite network proclamations -- actually too close to call. Two blocks before Gore's motorcade reached the War Memorial, where the vice president was set to concede, Whouley paged Gore's traveling chief of staff, Mike Feldman, and told him to stop the proverbial presses.

Whouley will supervise the Palm Beach operation, which includes managing an affadavit outreach to unsatisfied voters and making available for the media "real people" surrogates who experienced difficulty voting. John Giesser of the DNC will work with Whouley. Giesser and Whouley will also help supervise the "hand-counting" of the Palm Beach ballots on Saturday.

The two will be joined in Palm Beach by longtime Clinton administration staffer Trish Enright, Whouley's former deputy Donnie Fowler and former AFL/CIO staffer Mike Matthews -- all of whom will handle "organization efforts," according to the memo.

In the "war room" in Washington, Fabiani will be assisted by former communications staffer Julia Payne and Fabiani's assistant Karen Dahl, as well as Gore spokesman Chris Lehane and Mattis Goldman. They will be joined by DNC communications director Laura Quinn.

Other DNC communications aides are being sent to other areas of the state where voting irregularities were reported: On Friday, Lisa Lubo was to arrive in Volusia County, just north of Orlando. Florida Democratic Party communications director Bill Buck and DNC spokesman Jamal Simmons were set to arrive in Broward County.

"I do not look at this as more than a weeklong project," Fabiani insists. "I'm hoping to go home the following Saturday to my real home in La Jolla [Calif.]," he says.

Fabiani offers a note of optimism -- followed by one that is quite the opposite.

On Friday, Fabiani accurately predicted that the Republicans would try to block the hand counts. "They're going to bring in lawyers and try to block them, because they know what the hand counts will result in." So even if the Democrats' war room becomes unnecessary, it may then become necessary, Fabiani says. "All we're asking for is a correct quick count. And I think they don't want to see that happen."