Everything you need to know about the Florida recount

Hanging chads! Overvoting! A crash course in the Sunshine State electoral idiosyncrasies that could determine our next president. 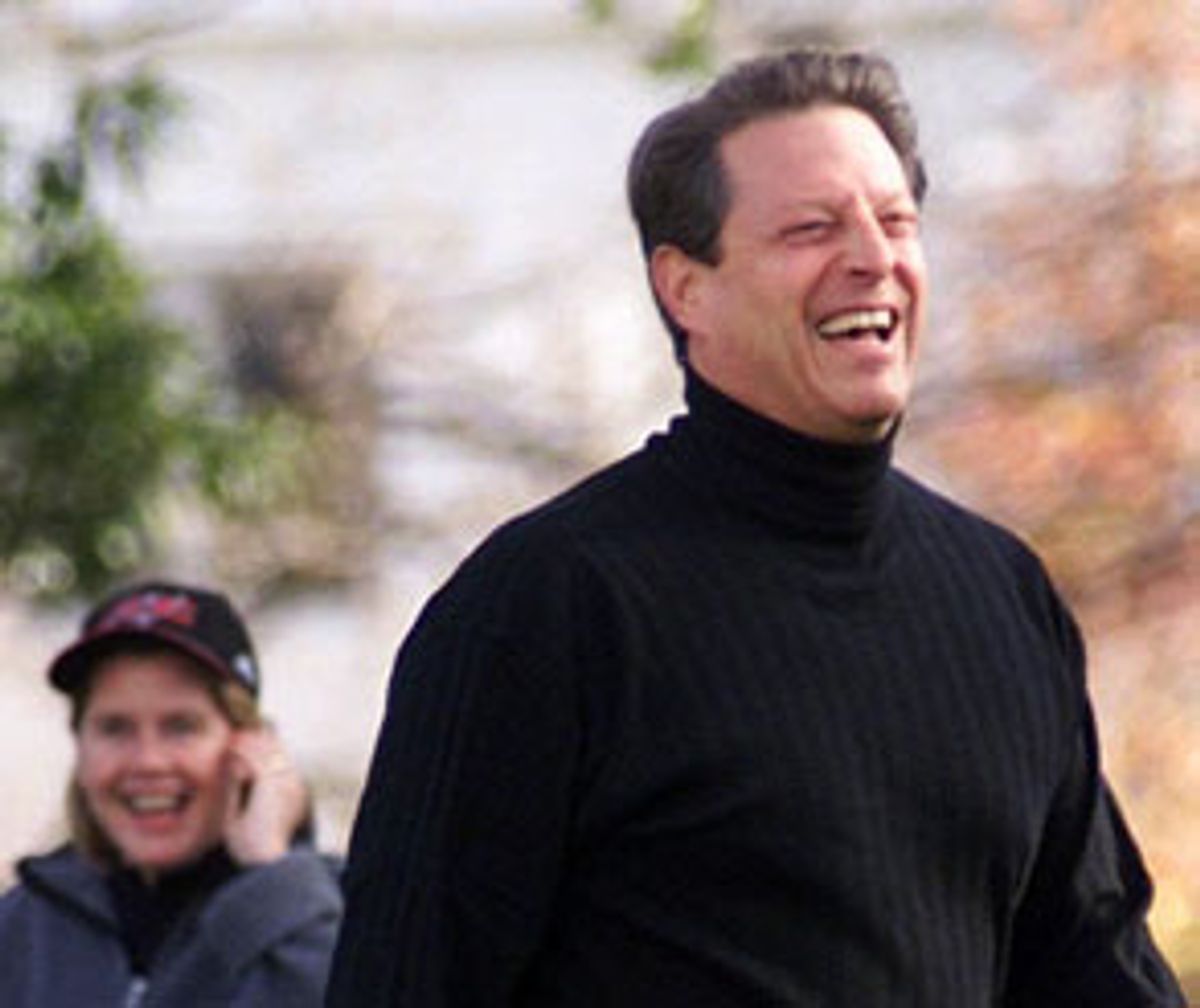 The battle over the Florida recount got uglier Saturday, with Gov. George W. Bush going to court to seek an injunction to stop the manual recount already underway in three counties.

A hand count, claimed Bush emissary James A. Baker III, is "less fair and less accurate," and is vulnerable to "human error, individual subjectivity" and decisions to "determine the voter's intent." A judge was expected to make a decision quickly, and experts were pessimistic the Bush attempt would succeed.

Hand recounts were already underway in three Florida counties. Palm Beach County -- where more than 19,000 votes were invalidated because voters selected more than one candidate, and 3,407 in this liberal region voted for Reform Party conservative Pat Buchanan -- voluntarily embarked on a manual recount in certain precincts. Volusia County, where a Socialist candidate was reported receiving more than 9,000 votes, but ultimately got only nine, began a countywide manual recount on Saturday. And in Broward County, where more than 6,000 votes were invalidated, a manual recount began in three precincts to determine if a countywide handcount is needed. All three are overwhelmingly Gore counties.

In all, the events of Day 4 of the Florida recount raised more questions then they answered about the final outcome of the presidential election. Here are some of the key areas of contention:

Republicans say 14,872 ballots were disqualified in Palm Beach County in 1996. Doesn't that undermine Democrats' complaints that the ballot disqualifications this week were extraordinary?

Punch-card ballots are most often discarded for two reasons: when voters select too many candidates per contest ("overvote") or no candidate at all ("undervote").

According to Federal Elections Commission consultant Bob Naegele, overvoters are usually confused. They think that they have to vote for both president and vice president and punch two holes in one category, or are perhaps just new to the punch-card voting process. Roughly one ballot per thousand, or .10 percent, is discarded for that reason, he says.

Undervoting, on the other hand, occurs on a lengthy ballot when voters simply don't bother to fill in every category. When ballots are "discarded" for either reason, they are done so only for that particular race. If someone overvotes for president, or doesn't vote at all, his or her legitimate vote for senator still counts.

The much-talked about 19,000 disputed ballots in Palm Beach included overvotes only. An additional 10,000 ballots were put aside by county officials for undervoting, bringing the total to nearly 30,000 discarded ballots in all.

The 14,000 Palm Beach County ballots that were voided in '96, Deutsch stresses, included both overvoting and undervoting. In other words, there were twice as many ballots voided this year in Palm Beach County.

Naegele says not only is this year's 19,120 discarded ballots especially high, but that it's "very unusual" for there to be more overvotes than undervotes, as there were in Palm Beach County in this election. "You would not expect that," he says; undervotes are far more common.

No one has an exact overvotes-vs.-undervotes breakdown from '96. But if what Naegele says is true -- that undervotes almost always outnumber overvotes -- then at most, half of those 14,000 ballots in '96 were undervotes. In other words, 19,000 people overvoted in Palm Beach this election, compared to, at the most, 7,000 four years ago.

"We have precincts where there were 100 overvotes for president, and two for senator," says Deutsch.

Why did the statewide recount produce such a windfall for Gore?

According to unofficial numbers reported by the Associated Press, the statewide recount ended in a pick-up of 2,520 votes for Gore, while Bush received 1,063 additional votes. Bush now leads Gore by only 327 in the entire state. That pick-up was not surprising to Andrew Glassberg, director of the public policy program at the University of Missouri, St. Louis. Glassberg was the chairman of a panel overseeing a federally mandated recount in a local election in St. Louis in 1987. In that election, St. Louis voters used the same types of punch ballot machines that voters in south Florida used Tuesday.

Glassberg says Gore's vote pick-up can be attributed to the "hanging chad." The chad is the perforated hole that is punched out by the stylus in the ballot machines used in South Florida. Chads that were not completely punched would not have been read by the machine. But with time, Glassberg says, the chads fall off, so it is possible that those ballots were rendered readable the second time around. Voters downstate, where Gore ran strong, used punch card ballots, while many upstate counties where Bush ran strong, used OpScan ballots. The OpScan is a fill-in ballot, similar to the forms used on standardized tests like an SAT.

Why are the Democrats asking for hand counts?

See above. Sources close to the process say Democrats are hoping to find irregularities in ballots not read by the machine that humans may be able to easily count as intended votes for one candidate. So it is not surprising that Democrats are asking for hand counts in counties where Gore ran strongest. Whether it be the hanging chad or some other irregularity, such as a pencil marking a punch out ballot, Democrats are hoping to find enough ballots to break in Gore's favor to put him over the top.

For example, Glassberg was the chairman of a panel overseeing a federally mandated recount in a local election in St. Louis in 1987. In that election, St. Louis voters used the same types of punch ballot machines that voters in south Florida used Tuesday. Glassberg said in his case, a number of ballots were not read the first time by the vote counting machines because people put their balllots into the machines backward when they voted.

"We looked at those ballots that the machine didn't read," Glassberg said. "When we looked at the ballots that were ostensibly blank, a number had what looked like pinholes in them. After a while we figured it out. If you put it in backward, you can vote for every office but it won't make holes in the right place. We found that if you took a correct ballot and turned them over and lay it over the so-called unmarked ballot, you could see to a certainty who these people were voting for."

Those ballots were allowed by the recount panel headed by Glassberg even though they were not readable by the machines. Glassberg says the commission also OK'd ballots with pencil marks over the punch holes, since many ballots in other parts of the state use OpScan ballots.

But Glassberg agreed with Baker's comments Friday that the alleged 19,000 ballots that were double punched, supposedly by confused Palm Beach voters who mistakenly puched ballots for both Gore and Pat Buchanan, should be discarded. "When one is punched for two candidates, you haven't have any idea what to do with it but throw it out," he said.

Glassberg says the unreadable ballots should be analyzed statewide, not just in the four counties currently requested by Democrats. "If the recounts in Palm Beach or Volusia make a difference, then there'll be heavy pressure to do it in all 67 counties," he said.

Meanwhile, Democratic henchmen from across the country were boarding planes and heading to Florida counties where recounts of the recount have been demanded by Democrats. California Democratic Party political director Bob Mulholland was boarding a plane to Orlando Friday afternoon, getting ready to help oversee the manual recount demanded by Democrats in Volusia County, which went overwhelmingly for Gore.

"My understanding is they have started the recount, and want to get it done within 24 hours," Mulholland said. "So we're all going down there to work in rotating 12-hour shifts."

Now Republicans have also requested a recount in Palm Beach County. Why? And what if they come up with different results?

Actual hand counts of ballots in some Democratic precincts are already underway in some Palm Beach County precincts, and Gore picked up 600 votes. Now both a manual count requested by the Democrats and another mechanical count, requested by Republicans, are going on concurrently, but it was unclear how those two recounts would be reconciled if they turned up different results.

"There was a discrepency between the two counts [the 600-vote break for Gore]," said Tucker Eskew, spokesman for the Bush campaign. "That's what prompted our request for a machine retab. We believe that machine counting is the most efficent, effective way to vote and/or tabulate votes. This idea that a hand recount is more accurate is on the face of it absurd. Machines eliminate the possibility of human error and any other kind of potential mischief. We've expressed strong concerns about a manual recount. We find it very troublesome."

No one could say what would happen if the manual recount and the machine retab continue to yield very different results.

Are there other different methods of recounts, besides a manual recount?

There are several, and they can yield different results. During the first statewide recount, ballot numbers in a number of counties increased for both candidates. In a handful of counties, those numbers remained unchanged. But a report by the Lake City Reporter revealed that in some counties where the numbers did not change, individual ballots were never run back through the counting machines. The supervisor of elections in Columbia County, Carolyn Kirby, merely replaced the memory cards back into the tabulating machines and reprinted the results from the original vote. Kirby told the Reporter that the same process was followed in Alachua and Leon counties.

Are the Republicans serious about threatening recounts in other states?

New Mexico's secretary of state announced the margin between Gore and Bush had diminished to just 106 votes. Many networks have now taken New Mexico and its 5 electoral votes away from Gore, leaving him with 255 and Bush with Bush 246. The New Mexico result could become significant if Repubicans follow through on their threats of the last couple of days to demand a recount in Wisconsin, which is currently in the Gore column along with its 11 electoral votes. In a wild hypothetical scenario, if Gore ends up winning Florida, while losing Oregon, New Mexico and Wisconsin, both Gore and Bush would have 269 votes, and the next president would be picked by the House of Representatives. Meanwhile, the Associated Press reports unofficial results showing Gore leading Bush by 5,973 votes in the still-undecided state of Oregon, with 99 percent of the votes counted. There, too, a recount might be necessary.

Also Friday, Republicans in Wisconsin alleged they found irregularities with the vote there, seemingly prepping for another electoral mess.