Why are Bush's people defending the sovereign right of machines to count votes? Because they're afraid they'll lose their narrow edge if all Florida's ballots are counted. 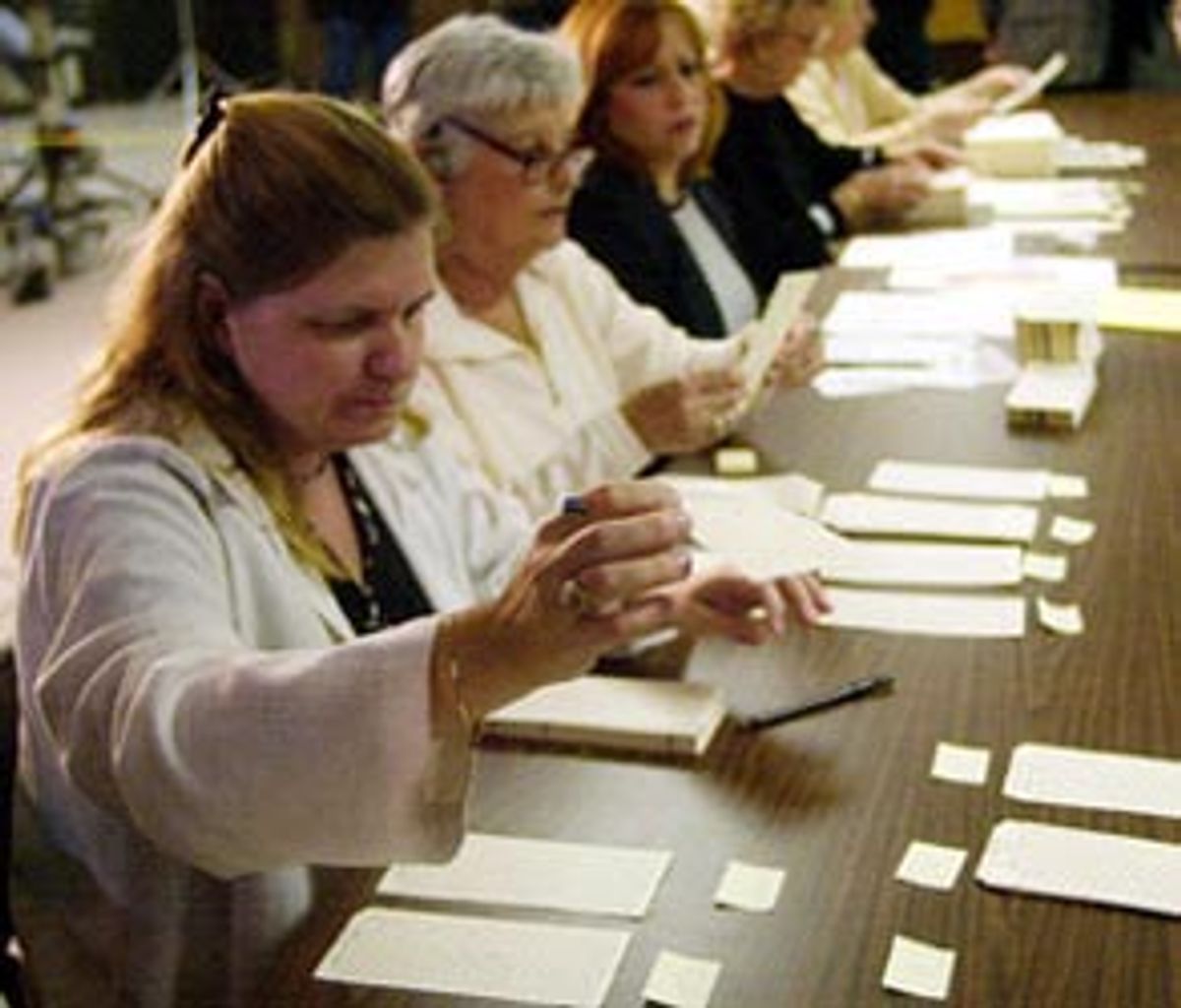 Candidate George W. Bush repeatedly declared that he opposes "activist" federal judges "legislating from the bench." But that is exactly what Bush has now asked U.S. District Judge Donald M. Middlebrooks to do: arbitrarily overrule the manual recount of presidential ballots in Palm Beach and at least two other Florida counties, a recount unquestionably permitted under Florida law and requested by the county's own election commissioners. So much for states' rights.

By filing a federal lawsuit against the recount, Bush and his consigliere James Baker have badly misplayed their hand. There is no conceivable harm to the public interest in a final, precise count in the presence of observers from both camps; a manual count in Palm Beach and other closely contested Florida counties will rob no voters of their rights. To the contrary, every poll shows that after the initial emotions of Election Day, the overwhelming majority of the public -- once again more sensible and patient than the Beltway spinmeisters of either party -- prefers accuracy over speed, credibility over closure. Newsweek reported that 72 percent of Americans agree with the Democrats that it's more important to get the vote count right than get it done fast.

You almost had to feel sorry for Baker this weekend, having to stand in front of reporters and try to make the case that machines, not people, ought to pick our next president.

"Machines are neither Republicans nor Democrats -- and therefore can be neither consciously nor unconsciously biased," Baker argued. A manual count, he says, "opens up tremendous possibilities for human error, something worse than human error -- for mischief."

Why, then, did Gov. George Bush himself sign a 1997 Texas law saying that manual recounts "shall be conducted in preference to an electronic recount"? In fact, there is no evidence that a manual recount in the presence of qualified observers is more prone to either error or corruption. To the contrary: The punch-card ballot system in Florida and Texas is vulnerable to all sorts of mechanical error owing to the limitations of punch-card readers and minor mistakes by voters.

At a Tallahassee press conference on Saturday, Florida election officials revealed that in last Tuesday's election, there were far more problems in counties using the punch-card system than the optical scan system, or OpScan. In punch-card counties, 32 ballots per thousand cast had to be invalidated. But in counties using the optical scan system, or OpScan, only two per thousand were thrown out. Around Florida, and throughout the county, election reformers are trying to move away from the punch-card system. Massachussetts has stopped using them entirely; so has San Francisco.

Coincidentally or not, Florida counties using the OpScan system tend to be Republican, while the punch-card counties are disproportionately Democratic. And one Republican county still using punch cards, Seminole, voluntarily hand counted its ballots when it conducted its state-mandated recount last week -- and gave another 98 votes to Bush, his largest county gain in the recount.

The real issue is neither legal technicality nor the engineering of voting machines. It is the credibility of the closest election in American history -- an outcome already thrown into doubt by Palm Beach County's disastrous excursion into graphic design on its ballots, by 30,000 discarded or erroneously punched voting cards, by the 3,407 votes that went to Pat Buchanan (three and a half times his total in any other county), by credible allegations of irregularities in some African-American and other minority precincts.

One only needs to look at Palm Beach results in other races, besides the presidential contest, to understand that something went wrong with the balloting. Where an astonishing 19,000 Palm Beach presidential ballots had to be discarded because voters picked more than one candidate -- known as overvoting -- the rate was far less for other races. The Palm Beach overvote rate was .13 percent in the race for Florida's education commissioner, .13 percent for insurance commissioner and .82 percent for U.S. Senate. For the presidential race, though, the overvote rate jumped to 4.1 percent.

Given what's at stake, what's needed is more transparency, not less. Instead of cutting short the manual recount in Palm Beach County, a manual recount ought to be sought for each of the 14 Florida counties whose final tallies still have not been certified by the secretary of state.

Bush and his GOP capos are playing the Florida recount like a Mafia war -- "They hit us, we hit them back," as Sonny Corleone says. With this lawsuit, Bush has, overnight, betrayed his campaign promise of civility and bipartisanship, which is why his strategy is being bluntly criticized by Sen. John McCain.

The governor's motives are almost embarassingly transparent: to avoid losing the few hundred votes that place Florida in his column, and to buy time hoping the public swings his way out of sheer weariness.

In a year dominated by voters' mistrust of the electoral machinery, that's a dangerous game, and his frivolous lawsuit is his most cynical and constitutionally dubious move yet. Judge Middlebrooks ought to throw Gov. Bush out on his ear. The hand counts, not only in Palm Beach County, must go on.