The Vietnamese revolutionary emerges as a patriot closer to Thomas Jefferson than to V.I. Lenin in this monumental new biography. 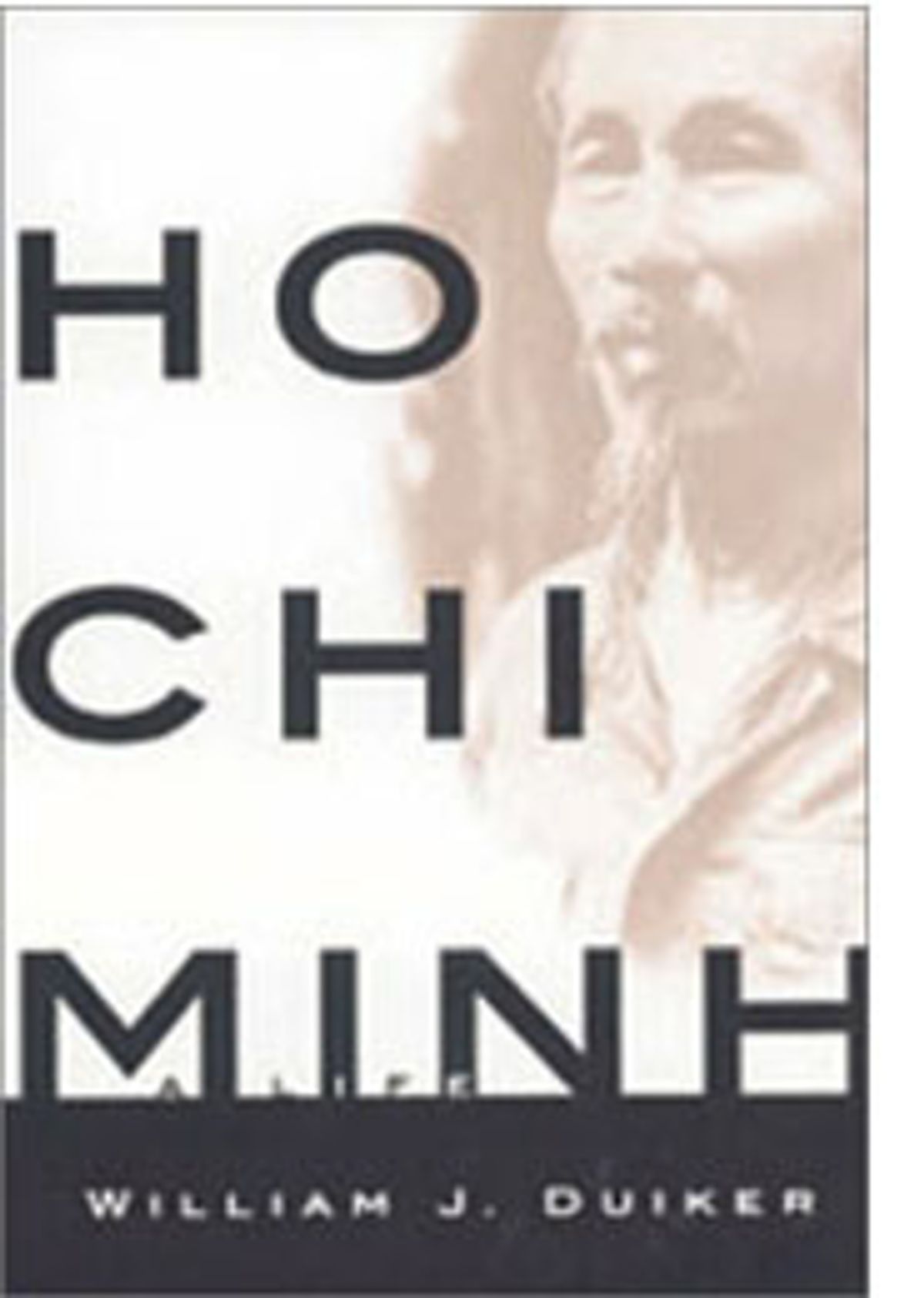 Ho Chi Minh, the dedicated Vietnamese revolutionary patriot of the 20th century, appears hopelessly out of date. Classic colonialism of a century ago seems light years away. Vietnam, for example, is a part of the global economy, meaning joint ventures that profit the local government, some favored officials and Western companies.

Nevertheless, the world is a different place because of Ho, and others like him, who agitated, fought and died to liberate their lands from the stigma and yoke of foreign tyranny. In "Ho Chi Minh," William J. Duiker, a foreign service officer in South Vietnam in the 1960s who since has written notable books on the area, has rendered a discerning portrait of one of the past century's most memorable, fascinating figures. Ho is largely remembered in mythic terms, both in Vietnam and abroad, but Duiker has made a formidable case for Ho's significance on the world stage. Ho is "in the pantheon of revolutionary heroes," Duiker writes, a leader who gave voice and example to the aspirations of oppressed, subjugated peoples everywhere.

Happily, Duiker has moved beyond the simplistic Cold War debate of whether Ho was a dedicated Communist, beholden to Marxist-Leninist orthodoxy, or whether he was a patriot and a nationalist, dedicated to freeing and uniting his country. Duiker rightly notes that Ho had deep roots in the international Communist movement; but he was a constant nationalist who provided leadership, vision and a firm commitment to the principle of self-determination. That ideal is deeply embedded in the American revolutionary tradition, and the United States proclaimed it to the world as the brighter side of its foreign policy. Sadly and ironically, however, self-determination became a casualty of the ideological warfare of the 20th century. Neutrality, John Foster Dulles once solemnly said, was "immoral."

Marxism obviously appealed to the young, colonial Ho, anxious to reclaim his land for the indigenous people. Such capitalist democracies as England offered no prospect for material or moral support, given their imperial interests. The United States was too aloof and uninvolved, however much it became a model. Almost alone, the Soviet Union offered Ho a refuge, ideological moorings and practical aid.

Similarly, futile pleas for independence frustrated and radicalized many colonials in Indonesia, India, South Africa and elsewhere. Nguyen Ai Quoc -- the younger Ho, in revolutionary guise -- was no different. V.I. Lenin's assaults on Western imperialism struck an enormous response, and they offered a practical, useful appeal, unlike the more abstract American notions of equality. Ho nevertheless later appealed to Thomas Jefferson's "all men are created equal" doctrine when he reasserted Vietnamese independence in 1945.

Ho unabashedly used communism for his own nationalist ends. His statement that "the peoples of Indochina still live and will live forever" is hardly compatible with Marxism. Duiker insists that for Ho, national independence always was the primary goal, while the doctrine of a communist utopia remained a vague, indefinite matter for the future.

Vietnam recently celebrated a quarter-century as a unified land, following decades of protracted, grisly wars with France, Japan, China and the United States. The best estimate is that at least 1.75 million soldiers and civilians from the various nations died between 1945 and 1975. For some, the history of the Cold War is a relentlessly historiographical account of the triumph of the free world over the other half of the world, apparently unfree, tyrannical and always menacing. But of course the free world remains contested turf, and paths chosen were not always wise or even effective. Duiker painfully reminds us that external Cold War considerations led to the failure of Paris and then Washington to grasp Ho's hand, resulting in profound consequences for the Vietnamese people and the world.

The United States aided Ho's Vietminh forces during World War II, and President Franklin Roosevelt had expressed disdain for continued French rule in Indochina. The end of World War II and the beginning of the Cold War form a seamless web. In late 1945, the U.S. supported the Chinese Nationalist disarming of the Japanese in the north. The Chinese, as we never seemed to understand, had been ancient enemies of the Vietnamese people who eventually cut their own deal and actively supported the French return. Meanwhile, the United States acquiesced in the resumption of French authority as France effectively played on American Cold War fears.

Secretary of State George C. Marshall inaugurated a nearly 30-year American policy emphasis on Ho's communist connections. Marshall's successors added the notion of the "domino effect," which conjured inevitable communist triumphs if Indochina were toppled: Today, Indochina; tomorrow, communists would rule Manila, Tokyo, Honolulu and, finally, the beaches of La Jolla. As France was about to lose its colony on the Dien Bien Phu battlefield in 1954, American cold warriors, notably Richard Nixon, advocated the use of tactical nuclear weapons, all in the name of keeping the dominoes standing.

Despite the French collapse, the Vietnamese still had another 20 years of armed struggle to secure their independence, but this time, against the American colossus. But irony abounds. The United States conducted its longest war, lost more than 50,000 soldiers, the red flag flew over Saigon, but surprise! No dominoes fell. The U.S. dollar today stands tall in Vietnam, and the president of the United States is about to arrive.

Stanley Kutler is the author of the "The Wars of Watergate" (Norton), and with Harry Shearer has written the forthcoming television series, "Nixon's the One."