"The Law of Averages" by Frederick Barthelme

The confessed minimalist's new book proves that the much-reviled genre can still break your heart. 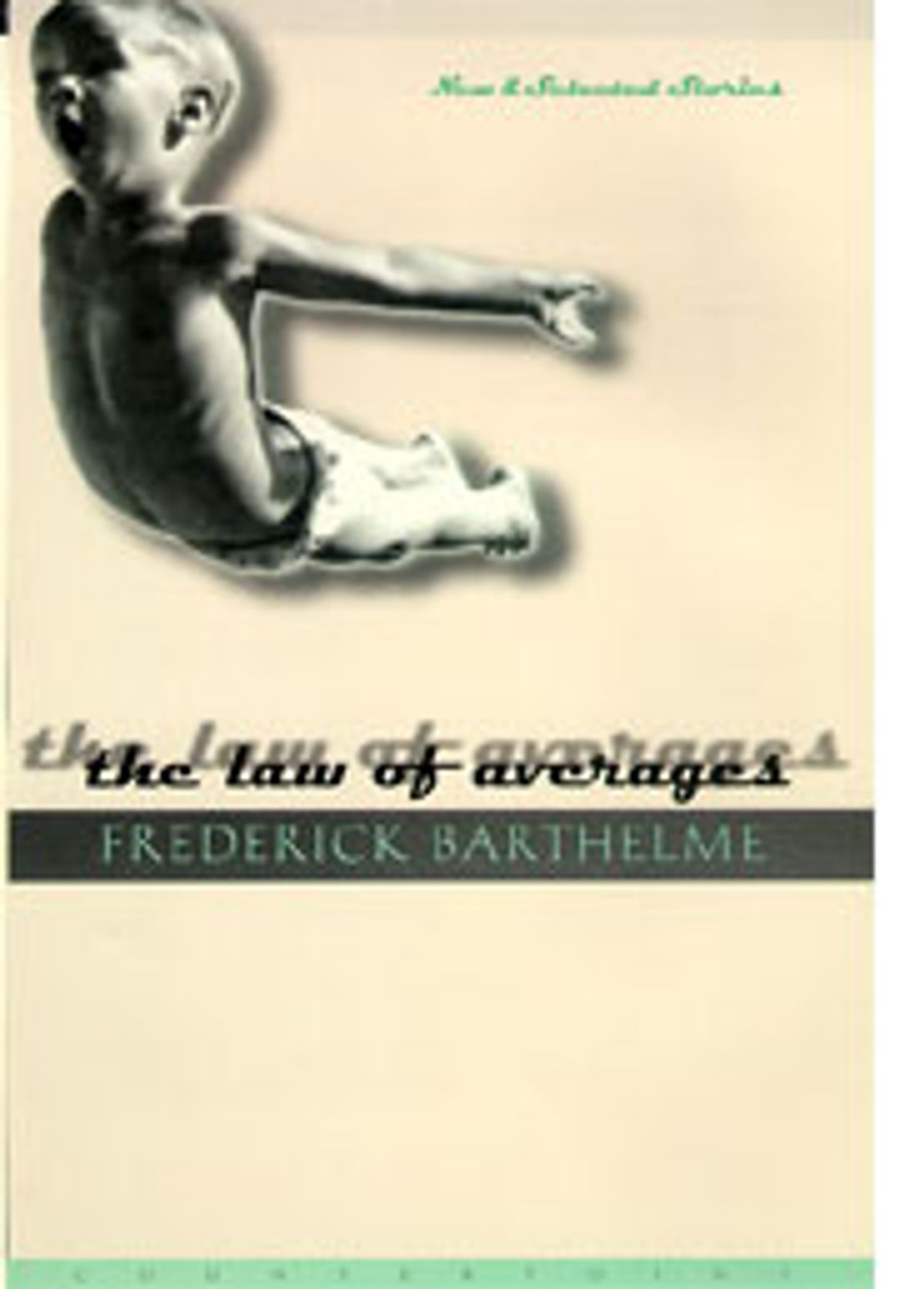 At some point, in the mid- to late '80s, you were forced to take a side: You were either for or against minimalism, that listless mode of fictioneering said to reflect, with its stripped-down rhetoric and its slo-mo portrayal of the quotidian, the flatness and the anomie of American existence. (One hesitates to say "life.") The minimalists themselves, unanimously hating the label, skirmished with their detractors in the pages of magazines and book reviews: Less is more, said one side; less is ... less, said the other. And not only was less less, the latter charged, minimalism was dehumanizing, they claimed, and amoral, and trivial, and linguistically soulless. "'Around the house and in the yard' fiction," as the maxi-minded Don DeLillo described it, about "marriages and separations and trips to Tanglewood." And on some counts, this reviewer must weigh in, the detractors were right. Minimalism wrought fiction that seemed, at its worst, little more than Dick-and-Jane stories for grown-ups: See Dick watch TV. See Jane frown. See Dick eat baked chicken. The end. It was literature with a message that could fit inside a fortune cookie: Nothing happens and nobody cares.

Chief counsel for the defense was Frederick Barthelme, or Barthelme the Younger, as John Updike is fond of referring to him, who laid out minimalism's merits in a 1988 New York Times Book Review essay titled "On Being Wrong: Convicted Minimalist Spills Beans." He passed along this advice to his fellow pecked-at minimalists:

Tell them [the naysayers] that you prefer to think you're leaving room for the readers, at least for the ones who like to use their imaginations; that you hope those readers hear the whispers, catch the feints and shadows, gather the traces, sense the pressures, and that meanwhile the prose tricks them into the drama, and the drama breaks their hearts. Just like old times.

By now, of course, 1988 seems like old times; and while these sorts of aesthetic wars are never actually won, so to speak, it's safe to say that the bells have indeed tolled for minimalism's reign over American fiction. Thus, the publication of "The Law of Averages," a mostly retrospective anthology of Barthelme's short fiction, presents us with a grand opportunity to peer backward, with the slight cushion of history and without aesthetic rancor, at what Barthelme -- and by extension the minimalist ethos -- was able to do: that is, whether the prose does the trick, whether it can still, two decades later, break our hearts.

In the spirit of things, the minimalist answer is this: Yes. Barthelme's stories, it's true, travel negligible distances -- emotionally, geographically and physically -- and never so much begin and end as start and stop. At times they suggest Philip Glass' opera "Einstein on the Beach," during which the audience was encouraged to wander about; one could step out into the lobby for coffee and a cigarette and return confident that nothing much had happened in the meantime. Because, in Barthelme's world, nothing much does happen: A middle-aged white man almost, but not quite, makes a connection with one of life's mysteries -- or at least with a woman, who often, for Barthelme, embodies life's mystery. The "almost" is important here, because Barthelme's characters aren't awarded those connections, no matter how often they're glimpsed, even, in fact, when such connections are more or less forced upon them. In Barthelme's stories ("Pupil," "Instructor," "Violet") women are always dropping their clothes in front of startled men, or teen runaways or female college students are knocking on the apartment door; the men, in response, shrivel.

That Barthelme's hapless souls are aware -- keenly aware -- of their missed or nonexistent opportunities casts a gloomy, half-tragic shadow over these stories. Barthelme's characters were conditioned to expect more of life. "What am I cooking?" the narrator of "Cooker" asks his wife. The answer is lamb chops. "This makes me feel better," he says dryly. "Lamb chops, and suddenly the world is new, a place of mystery and possibility." The only epiphany, then, is that there are no epiphanies. "I stood for a minute there on the blacktop," says another narrator, "arms crossed, scanning townhouses across the street for a clue, a movement, anything out of the ordinary. There was nothing."

This sounds, of course, like the grousing of one of Barthelme's detractors, bemoaning the lack of clues, or movement, or anything extraordinary. But I'd like to return to Glass' "Einstein on the Beach" for a moment, because I think there's a corollary here. Andrew Porter, reviewing Glass' opera for the New Yorker, wrote that "Glass' score may be incantatory, but it is not lulling ... a listener to his music usually reaches a point, quite early on, of rebellion at the 'needle stuck in the groove' quality, but a minute or two later he realizes that the needle has not stuck; something has happened. Once that point has passed, Glass' music becomes easy to listen to for hours on end -- or so I find. The mind may wander now and again, but it wanders within a new sound world that the composer has created." Change a few words and Porter could be reviewing Barthelme.

Nothing much happens in Barthelme's stories, yes; but something happens in the reader's mind and, more important, keeps happening. In that respect, Barthelme's stories aren't so much stories as they are moods. A newspaper or hamburger wrapper skitters across a deserted intersection and your heart starts to crack. At times the effect is inscrutable; as one narrator says, speaking of the Dallas skyline: "I couldn't tell whether the lights were strange or it was fabulous architecture," which mirrors the bewilderment these stories can foment. The effect can even be irksome -- the weight of these seemingly weightless stories has the power to cloud the sunniest of days, even to wound, in a way reminiscent of Dostoevski or Kafka. Is this really the world I inhabit? you wonder, peering up from the page. And the answer leaves you desperate.