Tim Brown's career is a long tale of personal dominance in the service of bad teams. But this year he may finally get some glory. 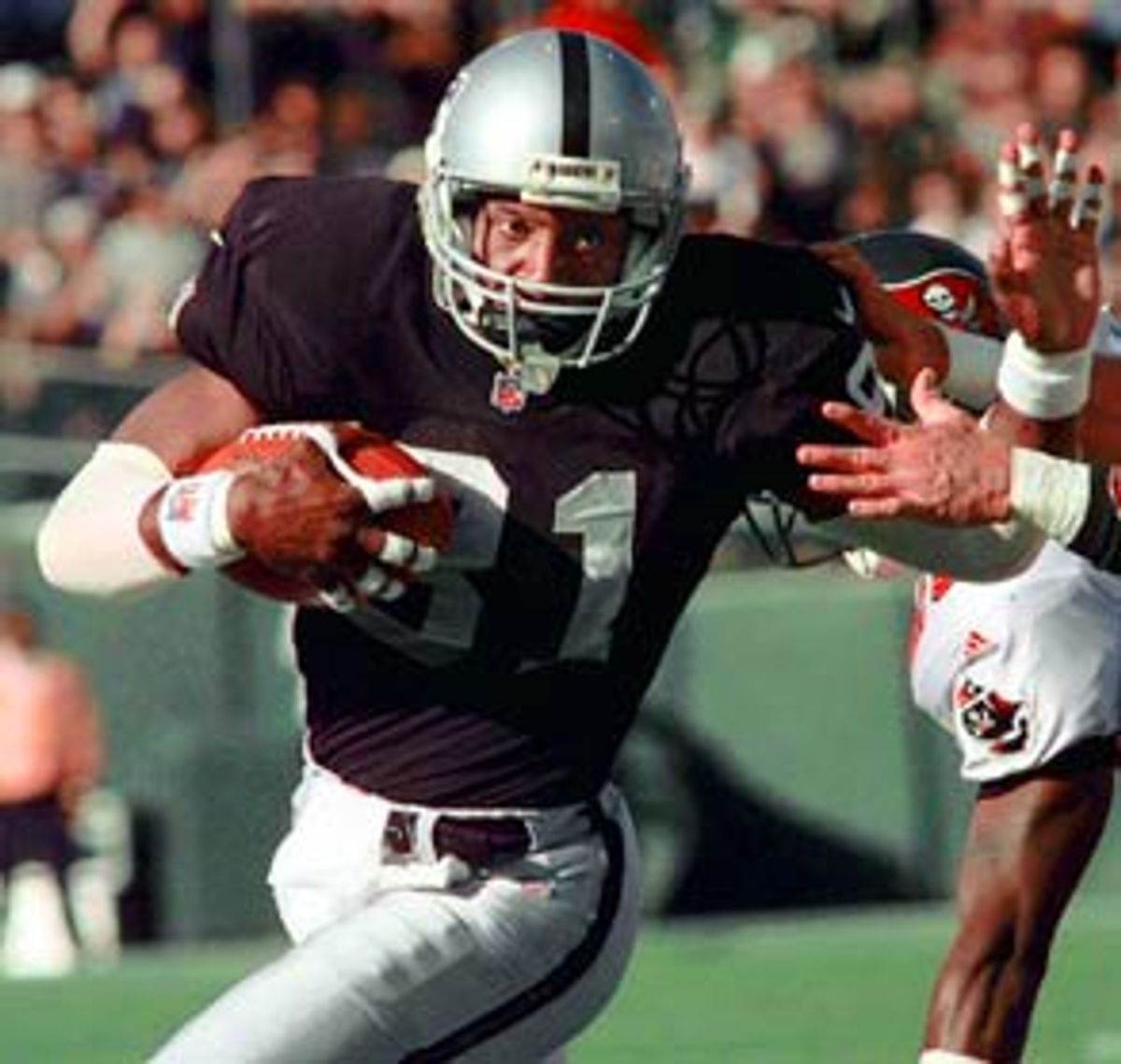 You think it isn't?? Then be honest: If you can't identify the man I'm describing in the above paragraph -- if you can't recognize him immediately -- then admit I'm right. If you're with me this far, let me try another: Tim Brown is one of the greatest players in football history. When was the last time you saw a profile of him or a special segment from NFL Films or something reviewing his career?

First, let me make the case. Monday night at Denver, Brown caught 10 passes including one for the tying touchdown inside two minutes to go as the Raiders rallied from two touchdowns behind but lost to the Broncos 27-24 on a last-second field goal. With the two catches he made on the Raiders' last scoring drive, Brown, with 821 receptions, passed Steve Largent (819) for fifth on the all-time list, a fact that somehow eluded the Monday Night Football crew. By the end of this season, he'll have at least 850, which will put him fourth, just in back of Andre Reed (889).

No. 1 of course is Jerry Rice, who is closing in on 1,200. No. 2 is Art Monk, who is retired, with 940. Reed is third and Chris Carter fourth; both are still active, but both are older than Brown and so, barring injury, he'll probably pass them both up by the end of next season. With a good 2001 season, he'll probably overtake Monk.

By that time, he'll likely be close to crowding James Lofton off the No. 2 spot in yardage. By then, too, he'll be ready to pass Don Maynard as the fifth most prolific touchdown maker among receivers. He has 74 TDs now. The great Don Hutson's 100, fourth on the all-time list, might be out of reach, but, hey, who can say? And let me add that Brown has accomplished all this despite missing 15 games as a rookie. Give him the 40 or 50 catches he'd have made in those games and by the time he retires he's a clear No. 2 behind Rice in virtually every category on the all-time list.

While we're mentioning Rice, let's bring up another point. Rice has had a few advantages over Brown in the accumulation of career statistics, namely in the area of having someone to throw the ball to him, which some experts think is rather important to a receiver. Rice has caught balls thrown by the two highest rated passers in pro football history, Joe Montana and Steve Young. Brown has had, well, who to work with? Can anyone remember half of Brown's quarterbacks in his Raiders' career?

It would make a great career on "Jeopardy!" if anyone could remember their names. Brown can. He recently rattled off all 13 of his QBs at a Raiders press conference, a feat not unlike being able to name all the Roman emperors between Marcus Aurelius and the fall of the empire. Where might Brown rank among the NFL's all-time receivers if he had played with passers as good as Montana and Young? Well, as it stands he's probably going to wind up second.

But Brown has an edge over just about any other pass receiver you want to compare him to: He's a better football player, an all-around star in the mold of the great players of decades ago, before specialization set in. In fact, there are those of us who think that a team of 11 Tim Browns beats a team of 11 anybody-elses you can name. Though the Raiders now prefer to save him for pass-catching, he is fifth on the league's all-time list for punt-return yards, having led the league in that category in 1994. In 1988, his rookie season, he led the league in kick-return yards and average. (Realizing he was too valuable to risk on kick returns, the Raiders' coaching staff relieved him of kick return duties in 1990.)

He was even more versatile in college at Notre Dame, where he was a superb end-around ball carrier and savage downfield blocker (which he remains today). In 1986, he led the most spectacular come-from-behind charge I've ever seen from a nonquarterback, erasing 30-12 and 37-20 Southern Cal leads with a 56-yard punt return and a 49-yard catch that set up the winning field goal for a 38-37 win as the clock ran out.

The next season he caught 39 passes for a 22-plus yards average -- much better than Michigan's Desmond Howard in his Heisman season -- personally destroying Michigan State with two punt-return TDs. Brown was an impact player, a clutch performer who made his presence felt with relatively few opportunities to handle the ball. He had no choice, as Notre Dame had no decent passer to get the ball to him, but despite brutal double and even triple coverage he made the big play often enough to win the Heisman Trophy. Because his totals were unimpressive by Heisman standards, Notre Dame haters scoffed; Mike Lupica even pushed Michigan State's Lorenzo White for the trophy. Anyone know where White plays ball these days?

If the sporting press really wanted heroes like the ones they say they want, they'd be all over Brown, who has remained loyal to the same mediocre team for years and has never done anything off the field worthy of mention in a story on Michael Irvin. This year, finally, in his old (for football) age, for the first time ever, he has a team good enough to carry him instead of the other way around, and in a rejuvenated Rich Gannon a passer worthy of being his battery mate. With a modicum of luck, Brown will lose that unofficial title of Greatest Player Never to Make It to the Super Bowl.