Beautiful arbiters of intelligence and sex, these women are historically important but perhaps a dying breed. First of two parts. 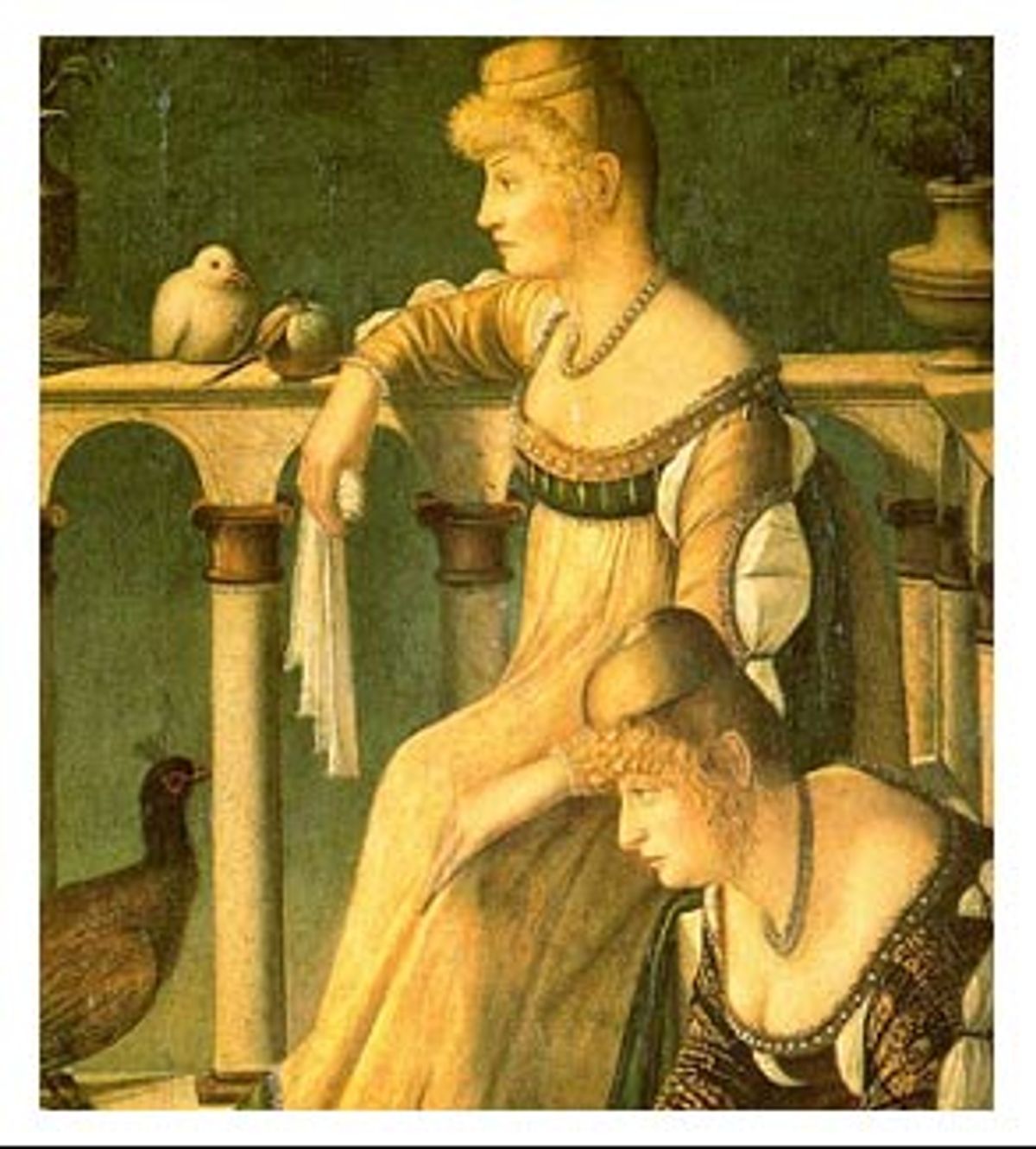 Courtesans have moved nations for centuries, using a potent combination of sex and politics to influence powerful men and advance their own places in society. Renaissance Venetian Victoria Franco charmed her powerful men with poetry and sex. Fast-forward 400 years or so, and courtesan spirit is embodied in women like Pamela Harriman and Clare Boothe Luce, who propelled themselves to power through their associations and marriages with powerful men. The throne is still open for a true courtesan of the 21st century.

Like a hybrid of Dorothy Parker and Jennifer Lopez, a courtesan in Renaissance Italy used her brains and her body to enjoy the benefits of marriage -- companionship, property and financial stability -- without the stifling social constraints. She also replaced a man's wife on the social scene, since proper married women were sequestered from the sins of the world and kept prisoners in their own homes.

Courtesans were companions for bankers, princes, prelates and merchants. Known for their wit, charm and elegance, they palled around with the most important and powerful men of their day. They wrote novels, published poems and influenced politics, often delivering political messages from pillow to pillow. They also used sex, and they flaunted it in ways that married women could not. As the French traveler and writer Pierre de Brantome snidely commented in the 16th century, "Roman ladies copulate like bitches but are silent as stones."

While the heyday of courtesans was classical Greece, they've been in every culture, most notably Renaissance Italy and 18th century Japan. No one knows where the term comes from but it's closest to the male "courtier" which means "of the court," says Margaret Rosenthal, the author of "The Honest Courtesan: The Life of Veronica Franco." Franco is perhaps the best known courtesan of the Renaissance -- a hall-of-famer who greased relations between Venice and France by bedding the King of France, and whose life was depicted in the 1998 film "Dangerous Beauty."

So what exactly would Italian courtesans do all day? They managed their household (which was often paid for by their patrons), overseeing the servants and shopping much like noblewomen. Courtesans were masters of disguise, for sexual intrigue and to throw off potential government officials. They would alternately dress like virgins, widows or ultra-demure noblewomen. Or they would go all out, clad lavishly and teetering on 10-inch clogs (which conveniently required them to have an escort), or sailing into church with an entourage of 10 panting men. (And all this dress-up meant that courtesans were among the biggest supporters of the cosmetics industry, dyeing their hair blond and even putting makeup on their breasts.)

Sometimes they would gleefully evoke the courtesans of ancient Greece, dressing up in togas and telling their lovers they were goddesses. And one of the favorite Venetian bedroom games was acting out the story of Leda and the swan.

But there was little companionship with other women. Friendships with other courtesans were strained since they were all competing for the choicest patrons. Noblewomen didn't like to hang out with them because, well, they were sleeping with their husbands.

Nighttime was when courtesans kicked into high gear. According to Mateo Bandello's 16th century book "Novelle," high-level courtesans would have six or seven lovers, each assigned to a different night of the week and each giving her a monthly "salary." This, of course, necessitated intricate scheduling and lover-shuffling in the days before cellphones and organizers.

To reward their patrons, courtesans would celebrate them in poetry and dedicate books to them, so "a volume of their poetry read like a who's who list of Venice," says Rosenthal. Literary and business skills were often passed from courtesan to courtesan in a kind of mentor relationship. "Franco was very interested in helping other women," says Rosenthal.

Being a courtesan allowed women to hold on to their sexuality while cultivating their minds. The only other women who were allowed to study were those in convents. "Being a courtesan let these women have more erudite lives than they normally would," says Rosenthal. And, "because a courtesan wasn't just arm candy," according to Rosenthal, she had to be learned. She was expected to attend her patrons' salons to entertain visiting politicians, and be a witty participant.

Unlike the courtesans of Italy and Greece, their Japanese counterparts -- whose heyday was the 18th century -- were only arm candy. "The whole point was for them to be amusing and decorative," says Elizabeth Sabato Swinton, curator of Asian art at Worcester Art Museum in Massachusetts. "They had absolutely no role in politics, and they were not respectable by any means. No one wanted their daughter to be a courtesan."

According to Swinton, the courting process was very ritualistic. Men would pay huge amounts of money just for an introduction, and they would have to follow an elaborate process of eating and drinking before they could even think about having sex. "You had to know the rules in order to play the game. It was all very stiff and formal," explains Swinton. And having a fat wad of cash would not guarantee sex. "If all you had was money, you would be considered a bore."

As well as influencing men using sex, courtesans also had enormous influence on fashion. In Japan from the 1600s to the late 1800s (the Edo period), courtesans invaded the drag venues where there was Kabuki theater. "The pleasure district was like Hollywood in the '30s and '40s," explains Swinton. "Courtesans had an entourage whenever they paraded in the streets, much like a queen bee." Women dressed like courtesans, in layers of embroidered silk robes, huge hair and extreme makeup that emphasized their eyes and mouths.

And just like Cher and her love affair with drag impersonators today, Swinton says, "Kabuki actors would frequently depict courtesans, and courtesans would model themselves after the male Kabukis. It was all this very weird role reversal."

Which was half of the fun. Part of a courtesan's mystery and intrigue was that the boundary between her and a noblewoman was murky. This was also done on purpose to avoid taxation. The Renaissance Italian government kept lists of courtesans in order to tax them, and, in some cities, they had to wear a yellow veil to identify themselves. But that didn't last very long. "Sometimes they would dress more demurely to throw men off," says Rosenthal. "They would also wear breeches under their skirts, because the whole idea of separating the legs was very risqué. They would also do it to attract men who had uh, tendencies for boys."

Courtesans' skills at cross-dressing did not go unnoticed by the Venetian government. Homosexuality was seen as a huge threat and punishable by death (men would be beheaded and their bodies burned), so Venetian officials often paid courtesans to "cure" homosexuals. Courtesans were encouraged to stand topless on the Ponte Della Tette, or Bridge of Tits, as it's still known today, to entice and convert suspected gays.

The homosexual angle was present in classical Greece (479-323 B.C.) as well. According to James Davidson, author of "Fishcakes and Courtesans," Greek courtesans (called hetaeras) enjoyed playing slippery games of identity, like their Italian counterparts did. They didn't want to be pinned down and subjected to taxation. (And since women couldn't own property in Greece, they lived "in the uncertain economy of the gift; jewels became an important part of a courtesan's 'portfolio.'") But it was also fun.

"Somewhere between a wife and a common prostitute was the courtesan," says Davidson. "That was also part of the attraction -- you didn't know who was a courtesan and who wasn't." Or as he puts it so deliciously in his book, "There was only one division that really mattered: the division between Wives and the Rest."

Davidson talks about ancient Greek sex scandals with the ease and facility with which we discuss the latest dirt on Ben and Gwyneth. And his book probes an overlooked aspect of ancient Greek life -- heterosexual sex -- with a delightfully naughty relish. For example, when discussing how Pericles' famous funeral speech about democracy was rumored to be written by his courtesan, Aspasia, he explains it as being "a really bitchy dig at Pericles." Courtesans were everywhere in ancient Greece, says Davidson, which is "shocking because even to speak the name of a good woman was scandalous."

What we know about them comes from records of symposia, because "if you had a great party, you'd always stock the place with courtesans," Davidson writes. Hetaeras loved parody and satire, and for laughs at parties they would take "high falutin' things and make them obscene and funny." Their witticisms were collected and put into verse, and they were also the inspiration for countless plays, speeches and works of art.

Davidson also chronicles how courtesans helped inspire ancient sex manuals, which included positions like "Lion on the Cheese Grater" which, as he says, "leaves us none the wiser."

The most distinguished courtesan and the "cleverest manipulator" of ancient Greece was Phryne, rumored to be the model for the sculpture of Venus. She, like many courtesans, was constantly popping up in court for causing trouble. One of the most famous trials of ancient Greece -- and the inspiration for dozens of paintings -- was Phryne's trial for introducing false gods. Her boyfriend Hyperides defended her, and when he saw he wasn't making headway with the jurors, he "reached over and exposed her breasts, filling the jurors with religious awe." She was acquitted.

Phryne also became incredibly wealthy because of her associations with men. When the city of Thebes was razed by the Macedons, she offered to pay for the city wall to be rebuilt as long as the citizens provided this inscription: "Alexander may have knocked it down, but Phryne the hetaera got it back up again."

But the life of the courtesan wasn't always so glamorous. Their powerful lovers gave them protection they could otherwise never have, but when romances soured, the revenge could be horrific. Spurned lovers sometimes mutilated or scarred their courtesans, or trashed them in literature. Franco was charged by the Inquisition for casting spells over her lovers, and Maffio Venier, an ex-lover and a bishop, constantly berated her in print. He wrote that her breasts hung so low she could paddle a gondola with them, and he dubbed her Ver Unica Putana (true unique whore).

A courtesan could also fall into disgrace if she contracted syphilis. One Renaissance book is titled "Lament of the Ferrarese Courtesan for Having Been Thrown Into the Cart Because of Having Contracted Syphilis." But the most devastating punishment was called the "31," where a courtesan was led to a secluded spot and raped by 31 lower-class men. A "Royal 31" meant rape by 81 men.