Women who wield sex and power now do it in 3-inch heels. Second of two parts. 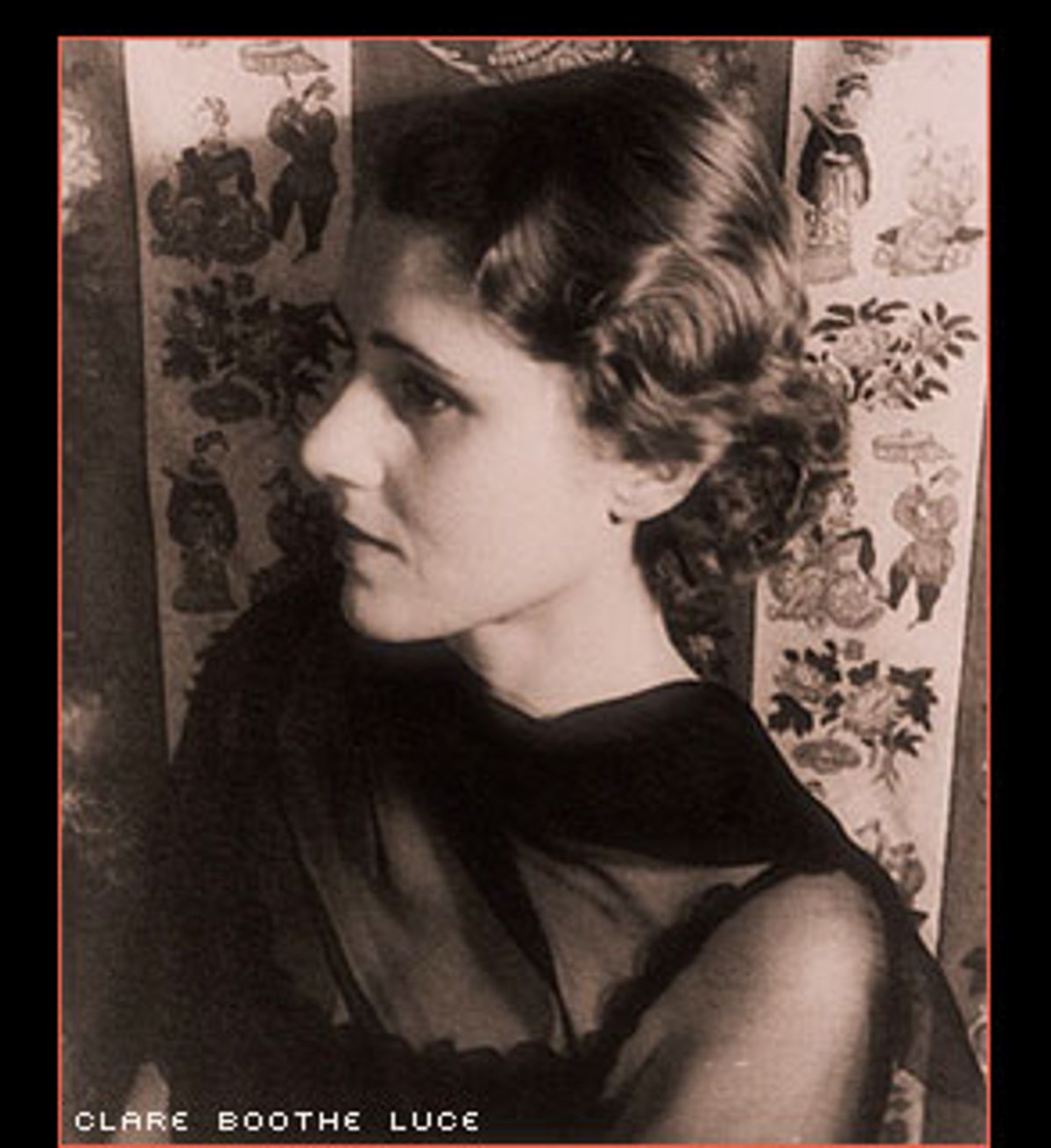 Two thousand years of history, genetics and killer wardrobes converged in two 20th century women who rocked the world in true courtesan style: Clare Boothe Luce and Pamela Digby Churchill Hayward Harriman. Neither woman had any formal education. Neither got along very well with other women. And they both wielded political and business power, as well as an explosive sexuality, to get what they wanted -- their queen-size cojones hidden beneath a patina of charm, wit and beauty.

The two women had drastically different ways of charming men. Christopher Ogden, Harriman's biographer, chalks up her success to being the world's greatest nanny. "She had an extraordinary capacity to focus on her men. She made them think they were the greatest thing since the convergence of the planets," he says. "She knew everything about her men -- what they ate, drank, read. If you looked uncomfortable, she'd grab a pillow and place it behind your back. If you were squinting, a shade would be drawn."

Harriman, who eventually became the U.S. ambassador to France (and died swimming in the rooftop pool of the Paris Ritz in 1997), began her training as a courtesan at age 19 with her first marriage, to Randolph Churchill, Winston's son. She often spent evenings with Winston -- whom she called "Papa" -- at 10 Downing St., discussing the war. "This is where she learned that any man, no matter how powerful, how wealthy they are, has uncertainties. She could pinpoint that and try to help. And these men would eat it up," Ogden says.

After her marriage to Churchill dissolved, Harriman was on her way to becoming the heavyweight champ of courtesans. What made her a courtesan was the number and type of people she was involved with, and the technique, skill and talent that she brought to every endeavor, says Ogden. And to get what she wanted -- political power -- she zeroed in on the men who could benefit her the most. As Ogden wryly puts it, "She never fell in love with any poor men." Her list of lovers includes Edward R. Murrow, Elie de Rothschild, Aly Khan, Jock Whitney and Gianni Agnelli. And there were also her subsequent husbands: producer Leland Hayward and statesman Averell Harriman.

But was she good in bed? Ogden won't speculate, but he does say he wasn't blown away by her in person. "She wasn't my kind of woman," he sniffs. "She didn't have a sense of humor. I don't think she'd be a fun date."

It's up for grabs whether Luce was a fun date, but her biographer, Sylvia Jukes Morris, argues quite vehemently that she was absolutely not a courtesan. "Clare would never bring a man slippers like Pamela," says Morris in her clipped British accent, clearly aghast at that image. "She didn't want to be in the service business. She was more ambitious than that. She used men for what she wanted and then left them, while a courtesan pays attention to men. She was more of a femme fatale."

With all due respect to Morris, Harriman's husband Hayward called Harriman "the courtesan of the century." Born into poverty and an illegitimate child, Luce married millionaire George Brokaw at age 19 after impressing a mutual acquaintance. When she was 26 Brokaw died, leaving her his New York mansion on Fifth Avenue and his fortune. More important, she inherited her freedom.

After Brokaw died, Luce went into overdrive -- which is when the legendary lode of Clare Boothe Luce stories started emerging (most likely self-generated). One incident occurred in 1929. After being rejected for work at Vanity Fair magazine, she waited until publisher Condé Nast left for vacation, marched into the magazine's offices and plopped down at a desk. Someone handed her work to do and by the time Nast returned, she was already an invaluable member of the staff. He hired her. She was introduced to Time magazine publisher Henry Luce at a party, and after only two more public introductions, he left his wife for her.

It was "a very calculated move on Clare's part," says Morris. "Her marriage to Luce was her entree into that world. Every phase of her life was planned out." She went on to become a successful war correspondent, playwright, congresswoman and ambassador to Italy.

Luce's method of seducing and dazzling men was quite different from Harriman's. They were both ferociously ambitious, and masters at dishing up sparkling conversation, but comparisons end there. "They targeted very different types of men," says Morris. "Pamela was a nurturer. She always wanted to marry her lovers, while Clare got what she wanted and left."

And Luce was not the great hostess that Harriman was, says Marie Brenner, author of "Great Dames: What I Learned From Older Women." "She was more like a Sherman tank. She'd do things like serve lettuce to the men at lunch because that's all she wanted to eat, or refuse to serve wine to the women but pour herself a glass."

Martha Stewart would disapprove, but then again, she's no courtesan. Or is she? Are there any modern-day contenders to the legacy of Harriman and Luce? While some would argue that women no longer need to act like courtesans, there are still women who think that the fastest -- and juiciest -- rise to power is through a man.

Washington is still mourning Harriman's death. Her closest replacement is Sally Quinn, the former Washington Post writer turned socialite. But she's a pale version of the classic courtesan. As one political insider sniffs, "The grande dames only go to her house because of Ben Bradlee." The Beltway has also turned a cold shoulder to Quinn since she wrote a self-righteous article blasting President Clinton for his affair with Monica Lewinsky. (It's no secret that when Quinn was a junior staffer at the Washington Post, she began an affair with Bradlee, 25 years her senior, who eventually left his wife for her.) The press erupted, and trashed her. In 1998, during a live C-Span interview, a caller confronted Quinn, saying, "Take a look at your own life. A lot of people said you slept your way to the top." Quinn turned purple. One Washington insider says gleefully, "My friends say that moment was worth the entire year's price of cable."

Other names that are tossed around include Sen. Dianne Feinstein, fundraiser Georgette Mossbacher, Cristyne Lategano, Katrina vanden Heuvel and political pundit (and Salon columnist) Arianna Huffington. Huffington is the most probable contender. She's smart, sassy and attractive and has a sexy Greek accent, which are all excellent criteria for courtesanship. "She's certainly brilliant and among the ranks of such women as Madame de Pompadour," says Kevin Chaffee, Washington Times social editor. "She's more intelligent than most of the men she's been associated with, with the possible exception of Bernard Levin."

Others would argue that she lacks the most important asset -- multiple husbands. "She's just a one-off," says Ogden, referring to her former husband, Michael Huffington. "She didn't have the number of men Pamela did, or the number of positions."

One woman who does have it all is Democratic fundraiser and serial wife Patricia Duff. She has been called "an enchantress," "exquisite in a Grace Kelly way," "luminous," a "man magnet" and a "femme fatale" by journalists. Washington Post columnist Richard Cohen said of their first meeting: "She was one of the most beautiful things I had ever seen, maybe after the Grand Canyon." A former husband said, "She can be the single most charming being in the history of the world."

Like Harriman and Luce, Duff gained her political power through her associations with wealthy and powerful men and, like Harriman, she never had the misfortune of falling in love with a poor man. She studied international relations at Georgetown, and later took a job at the House Select Committee on Assassinations.

From there, she worked on two endeavors: collecting powerful husbands and gaining political power. Her first marriage was to a high school sweetheart. The second was to Washington lawyer Dan Duff. After that marriage dissolved, Duff went to Los Angeles to become an actress, where she met studio head Mike Medavoy and lured him away from his wife. She later dumped him to chase after billionaire Ron Perelman, the Revlon executive and New York's richest man, and the two married in 1995.

The Perelmans had a very ugly spat at the 1996 Democratic Convention and Perelman filed for divorced shortly afterward. (The marriage lasted only 18 months.) But the union left Duff with $30 million and an impressive political track record. While with Perelman, Duff became the executive director of the Women's Leadership Forum and co-chaired fundraising for the 1996 Clinton-Gore campaign. Right now, Duff's political actions have taken a back seat as she battles Perelman for custody of their 4-year-old daughter, but she still seems to be on the prowl for power. She has most recently been linked to Sen. Robert Torricelli, D-N.J., so she hasn't forgotten her old ways.

While some, like Brenner, consider these sexy and powerful women to be proto-feminists, others, like conservative babe/pundit Ann Coulter, are appalled by their behavior. "Women like Pamela Harriman and Patricia Duff are basically Anna Nicole Smith from the waist down," she spits out. "Let's just call it for what it is. They're whores. Lots of women in that era got ahead without having to sleep with men ... Speaking as someone who's been accused of sleeping with their male bosses -- and I never have -- I resent courtesans like Cristyne Lategano."

Coulter says, "Clare Booth Luce is a true feminist. She's brilliant, satirical, snobby and fabulous. She wrote 'The Women,' which is still being produced today. What did Pamela Harriman ever write?"

And as for the accusation that Clare zeroed in on Henry Luce, Coulter says that's crap. "The reason that Clare ended up marrying a powerful man is because she was a hot commodity herself. Who was she going to end up with, the paper boy?" The same goes for Huffington, she says. "Even though Arianna has gone to the dark side politically, she was accomplished before she ever met Michael Huffington. She could have married anybody."

Politics aside, Brenner has a hilariously practical take on modern-day courtesans. "These women didn't waste their sexuality. Instead of sleeping with some jerk and complaining about bad sex, they fucked someone powerful."

And Brenner thinks the courtesan style is coming back. "My generation rejected charm," says the author (who is 50). "We were out there in sweat pants fighting for equal pay and equal rights. The current generation is fighting for the same things, but they're doing it in Manolo Blahniks."