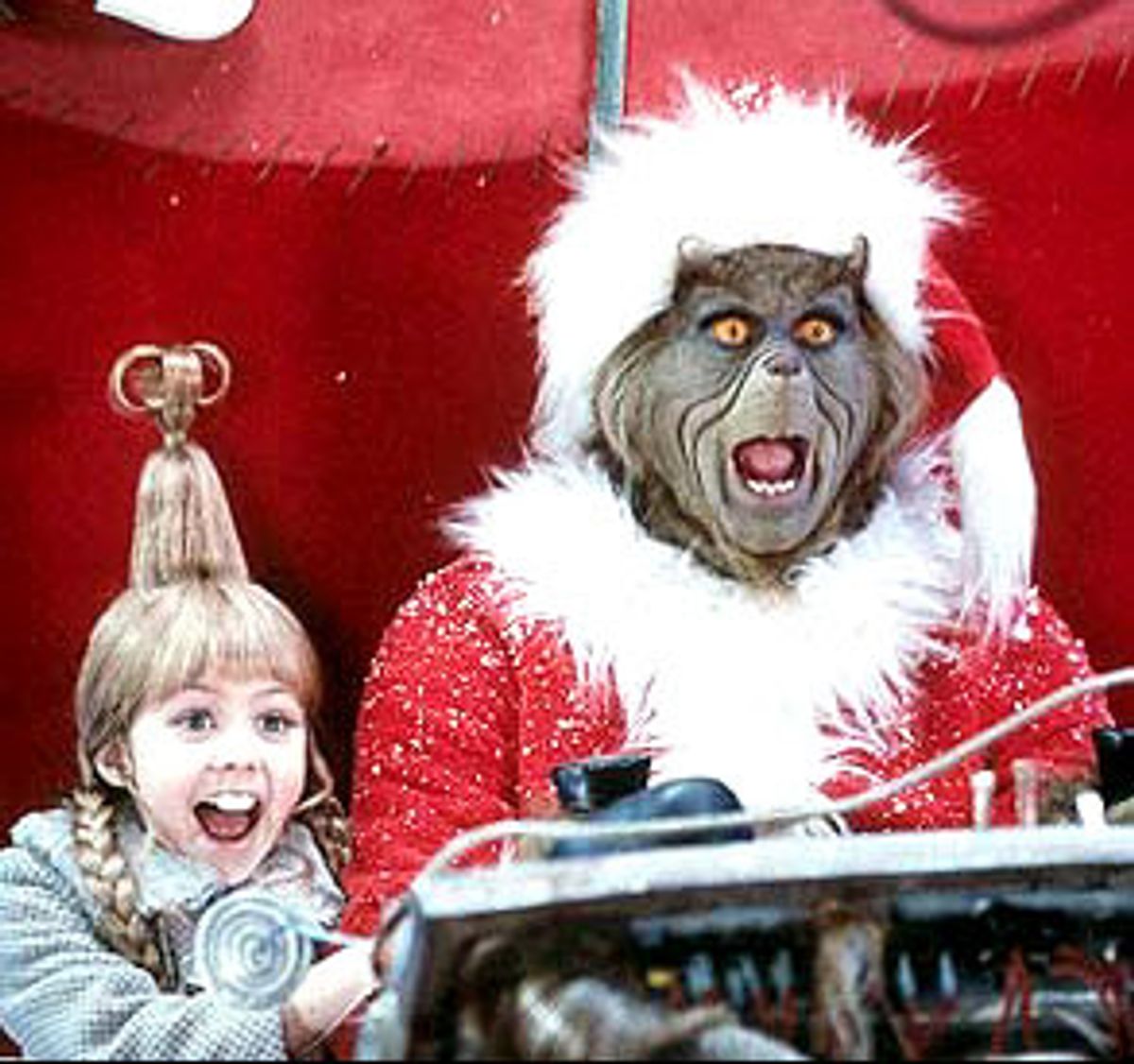 There's a dispiriting cheapness to Ron Howard's "Dr. Seuss' How the Grinch Stole Christmas"; it's like a Christmas gift that's been dumped on you by someone who obviously couldn't care less.

That's not to say that Howard and his cast and crew haven't gone to a certain amount of trouble in adapting both Dr. Seuss' book and the much-loved 1966 Chuck Jones television version of it. It's just that all their attention has been poured into the wrong details: You get characters walking about with cups of swirling eggnog balanced whimsically on their heads, elaborate chapeaux that are both more garish and less fanciful than anything Seuss (also known as Theodor S. Geisel) ever came up with. And the stylized, curlicued beauty of the Whoville landscape, as Seuss originally drew it and as Jones later adapted it, has been replaced by a tarty Candyland. Forget hearing a Who; you can barely hear yourself think.

But then, Howard's "Grinch" is mainly a vehicle for its star, Jim Carrey, buried beneath layers of prosthetics, makeup and synthetic green fur, and the picture is almost tolerable when he's on-screen. But when he's not, we're forced to endure the antics of the aggressively winsome Whos of Whoville, in Howard's vision a race of rodent-like creatures whose lust for life seems to be driven solely by the desire to buy and receive Christmas presents.

Of course, the Whos have a lesson to learn, but not before we're subjected to a song from the worst of the bunch, the über-adorable Cindy Lou Who (played by Taylor Momsen). With all the earnestness of a child politician, she asks, "Where are you, Christmas?" If you happen to know where it is at the beginning of this scattered, frenetic and superfluous picture, you're entirely likely to have lost sight of it by the end.

There are those who believe the classics (Dante, Shakespeare, Geisel) should never be messed with, but I'm not one of them. In an interview he gave when his spiky and delectably multilayered comedy "Scrooged" was released, Bill Murray noted that there was much discussion on the set regarding how the source text, "A Christmas Carol," should be interpreted. "In the Dickens ...," someone would say, noting the handling of this or that detail, and Murray would interject, "But in the Magoo ..." The point, of course, is that a great work can sustain multiple interpretations. And as much as I knew no one could improve on the Seuss-Jones "Grinch," I did wonder what feats Carrey might be able to pull off in the lead role. But even though Carrey has plenty of screen time, his presence barely registers amid the movie's clutter, which overtakes the essence of the original.

The Seuss-Jones version works because it was a model of economy. At 25 minutes, it flies by like a shot, although it's immeasurably satisfying. Its inventiveness breathes in dozens of crackerjack details: the way the ill-tempered, misanthropic Grinch loosens a tiny sleeping Who's grasp on a candy cane by tapping the end of it with a gentle "tink-tink-tink," or the way a heart-shaped piece of fruit transforms into the shrunken red pupil of the Grinch's eye. And its theme -- that Christmas is about love, not the trappings -- is never allowed to overflow into excessive gooeyness. The Seuss-Jones "Grinch" works because it grooves on a healthy measure of basic human grumpiness. As Jones once said in an interview, "Everybody hates Christmas just a little bit."

That's probably why audiences through the decades have responded so strongly to the story of the Grinch (just as they have to Dickens' Scrooge). But Howard's "Grinch" is so aggressively cheerful, its message both ham-fisted and muddled, that it doesn't allow much space for the audience to feel anything. The sets and costumes are loaded with bright colors, and yet there's something pleasureless and vacant about them. Seuss' landscape looked like a dream vision from another planet, with its curvy mountain peaks and slender, sloping evergreens, and the Who homes were like honeymoon cottages deeply in love with art moderne. Howard's Whoville, with its styrofoam snow peaks and brassy Christmas lights, resembles those generic Christmas Villages that you see in malls, the ones that get shabbier and more depressing with each passing year.

And just who are these Whos anyway? It's impossible to translate the button-nose charm of the Seuss characters into live action. So why did Howard even try? His Whos -- including a host of unnecessary characters from Cindy Lou's parents (Bill Irwin and Molly Shannon) to a pompous mayor (Jeffrey Tambor) to a bodacious Who sexpot (Christine Baranski, who's flirtily amusing) -- with their prosthetically elongated nasolabial folds and chipmunk teeth, are the stuff childhood nightmares are made of. (They look something like Meckis, hedgehog-like stuffed creatures with unnervingly human features made by the German toy manufacturer Steiff, the kind of creepily cheery playthings that, dressed in their weird old-world pants and kerchiefs, look like they might come to life and murder you in your sleep.)

And then there's the script (by Jeffrey Price and Peter S. Seaman), which resembles the original story only in the most basic way. In case we ever wondered, we learn that the Grinch became cranky as the result of childhood trauma, eventually exiling himself to Mount Crumpit to distance himself from the Whos who had so cruelly Who-miliated him in his youth. He's coaxed down from the mountain when the abominably charitable Cindy Lou nominates him for a special Christmas honor. After a doomed visit in town, he decides to sabotage Christmas, the Whos' favorite holiday, dressing as Santa and invading their houses on Christmas Eve to steal off with all their presents and decorations.

In the Seuss-Jones version, the Whos don't even blink when they awaken to their barren homes and denuded town square; they march to the empty space where their town Christmas tree used to be and sing their special Christmas song. In Howard's "Grinch," the Whos are a dreadfully materialistic little bunch. When they awake to find their homes ransacked, there's a kafuffle in the town square, and the mayor blames little Cindy Lou for ruining Christmas by trying to extend kindness to the Grinch. Somehow, though, the troubled citizens finally catch on to the idea that Christmas isn't about stuff after all. They gather to sing, and the Grinch, who's just about ready to shove their loot over a mountain peak, is so moved by the sound that he repents for good, ultimately returning the stolen goods. Howard stretches this sequence out interminably, just in case we're not clear on its meaning.

But there is no meaning to this "Grinch." Its effects seem aggressively elaborate while you're watching the picture, but they're barely memorable a day afterward. (One exception: Baranski decorates her house with the help of a machine gun that shoots out a string of Christmas lights like cake frosting.)

This "Grinch" might have partially redeemed itself if it had at least provided Carrey with a chance to shine. The prosthetics and heavy makeup heightened the challenge: With his facial expressions restricted, what kind of amazing physical shenanigans might he come up with? As it is, Carrey pulls off an admirable impersonation of an animated figure. Behind those sadistic yellowy eyes and that rangy green fur, he gets the facial tics, and the precise, slippery mannerisms, of Jones' Grinch just right.

It's fine as mimicry goes -- but mimicry isn't the best playground for comic genius. Shouldn't we be asking more of a man who's very likely the most gifted comic actor of his generation? Carrey's rubbery grace marks him as the most physically gifted comedian since Jerry Lewis, and his dotty free associations, here and in just about every picture he's done, from "The Mask" to "Dumb & Dumber" to "Me, Myself & Irene," suggest a mind that's mosquito-zapper quick.

He does pull off a few terrific ad-libs here: Making a mental list of the things he might do on a given day, he mutters, "Solve world hunger," then waits a beat and adds, "Tell no one." But mostly, his jokes come off as nothing more than a desperate effort to inject some offbeat humor into an otherwise numbingly unhip, nonsensical and just plain dull story. Howard's "Grinch" clocks in at about an hour and a half, but, padded, bloated and frenetic all at once, it trundles along like an eternity. By the time the Whos finally get around to discovering the meaning of Christmas, they've sapped our will to live. It's enough to make a Grinch out of anyone.