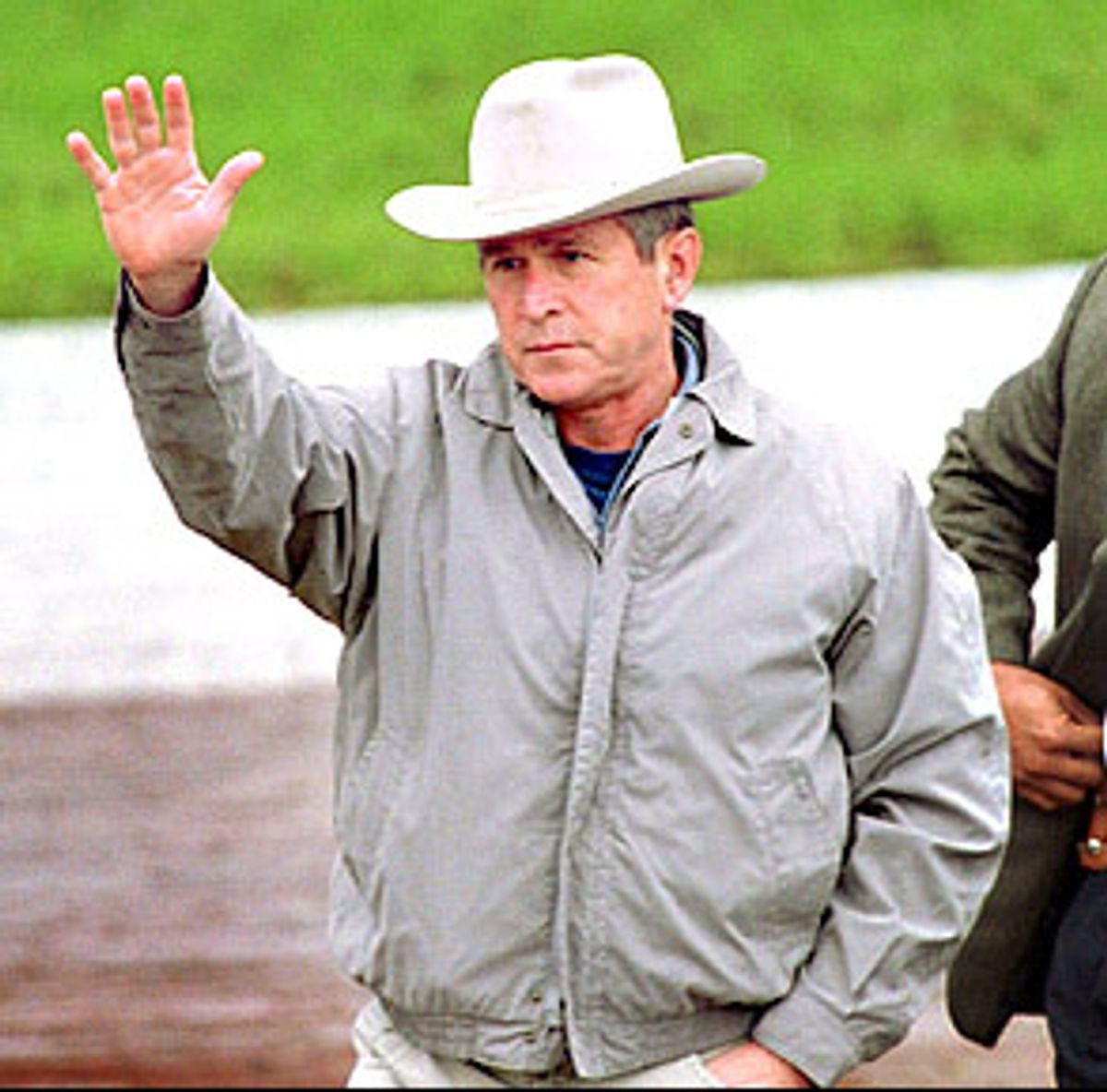 In a new, brutal rhetorical attack, the Bush campaign Saturday blamed Vice President Al Gore and his supporters of manipulating the Florida vote count after nearly 1,400 absentee ballots, many of which reportedly came from the military, were thrown out for improper postage.

At a press conference in Austin, Bush communications director Karen Hughes brought out Montana Gov. Marc Racicot, who, speaking for the Bush campaign, launched into a series of other allegations about the manual recount of votes in Florida, which he called "completely untrustworthy." In a clear plea to the viewing public, Racicot said that if Americans only knew what was really going on in Florida, their collective response would be: "What in the name of God is going on here?"

The Bush team has obtained sworn statements from recount workers in Palm Beach County, Racicot said, testifying to an evil new breed of chad, the "taped chad," in which a punched-out chad, apparently indicating a vote for Bush, was taped back onto the ballot. Among other allegations there: "Bush ballots were found in the Gore pile" in an act of "sabotage"; "ballots have been used as fans"; "ballots have Post-it notes on them"; elderly workers have been "exhausted" and "angry" and "fatigued."

In Broward County, Racicot complained, there are constantly changing standards, including whether a "dimpled chad" should be considered by workers charged with trying to divine the intention of voters. If Racicot is to be believed, the Broward recount is in chaos, with "chad on the floor, on the counting tables, on the chairs."

Racicot also took repeated shots at the Gore camp over the absentee ballots that were discarded because of improper postage. "We learned how far the vice president's campaign will go to win this election," Racicot said, "in an effort to win at any cost."

After the overseas absentee ballots were finally tallied, Bush's lead over Gore increased to 930, a gain of 630 votes, according to the Associated Press. But Friday night, before the votes were tallied, the Bush campaign began to snipe after it learned that close to 1,400 overseas ballots had been rejected. "We are distressed at what appears to be a statewide effort on behalf of Al Gore to discredit the votes of military servicemen and women," Bush campaign spokeswoman Mindy Tucker said. Overall, some 2,200 overseas ballots were accepted and counted.

The Bush campaign didn't offer concrete evidence for the explosive allegation. The AP reported that a Tallahassee attorney, Mark Herron, "sent a five-page letter to Democratic attorneys throughout Florida giving them tips on how to lodge protests against overseas ballots," and apparently in some counties half or nearly all the ballots were rejected, including military ballots that lacked postmarks. The Democrats derided Tucker's implication that the Gore campaign was trying to nullify appropriate military ballots as "misinformation and conspiracy theories."

The Saturday afternoon attack from the Bush side came after the morning's more upbeat message, when Hughes, in a prepared statement, said that the Texas governor and running mate Dick Cheney were "pleased" with Bush's gains, and hoped the end is in sight. "Florida's votes have now been counted and recounted, and in some counties recounted three or four times, and virtually all of the overseas ballots have been counted," Hughes said. "We are hopeful that once the Florida Supreme Court has heard arguments in this case, the laws of Florida will prevail and the election will be certified."

It wasn't certified Saturday at noon, as the Bush campaign -- and Florida Secretary of State Katherine Harris -- had hoped. The Washington Post reported that Austin's Four Seasons ballroom had been rented for Sunday, presumably for a victory celebration. At one point Friday, after Leon County Circuit Judge Terry Lewis ruled in the morning that Harris could certify the election Saturday, ignoring the late votes coming in from manual hand recounts, the Bush team might have thought the party would go on.

But Gore's attorneys appealed Lewis' decision, and, at about 4 p.m. Friday, the Florida Supreme Court took up the case. More than that -- and more than the vice president's lawyers had asked for -- the court forbade Harris from certifying the vote Saturday. A hearing on the matter was scheduled for Monday afternoon. Attorneys for both sides were to file their arguments by 2 p.m. Saturday.

Then the 11th Circuit Court of Appeals in Atlanta refused a Bush appeal that it stop the manual recounting of ballots in a handful of primarily Democratic Florida counties.

Suddenly, a day that had started off as the sunniest for Team Bush this week was dimming fast.

In another new wrinkle, a lawsuit was filed in Seminole County, challenging 4,700 absentee ballots in the county. In a hearing Saturday morning, a Democratic activist contended that county elections supervisor Sandy Goard allowed volunteers to write registration numbers on those absentee ballots, the majority of which were for registered Republicans. Without the registration number, those votes would have been invalid. No word on when a ruling is expected.

Meanwhile, Broward and Palm Beach counties continue their hand recount efforts with no guarantee that any new votes discovered will ever be added to the state's final tally. So far, it has been a slow, uphill climb for Gore, who has picked up just 52 votes in the Broward County recount, with about 160 of 609 of precincts reviewed.

Palm Beach County's recount effort has been frustrated by the contentiousness of some GOP observers, which has resulted in 1,800 of the first 16,000 reviewed ballots being challenged. Some Democrats have called it a deliberate attempt to slow down the process, and stifle anticipated gains for Gore. Miami-Dade County decided Friday to start manually recounting its ballots, more than 600,000 in all, but has yet to begin.