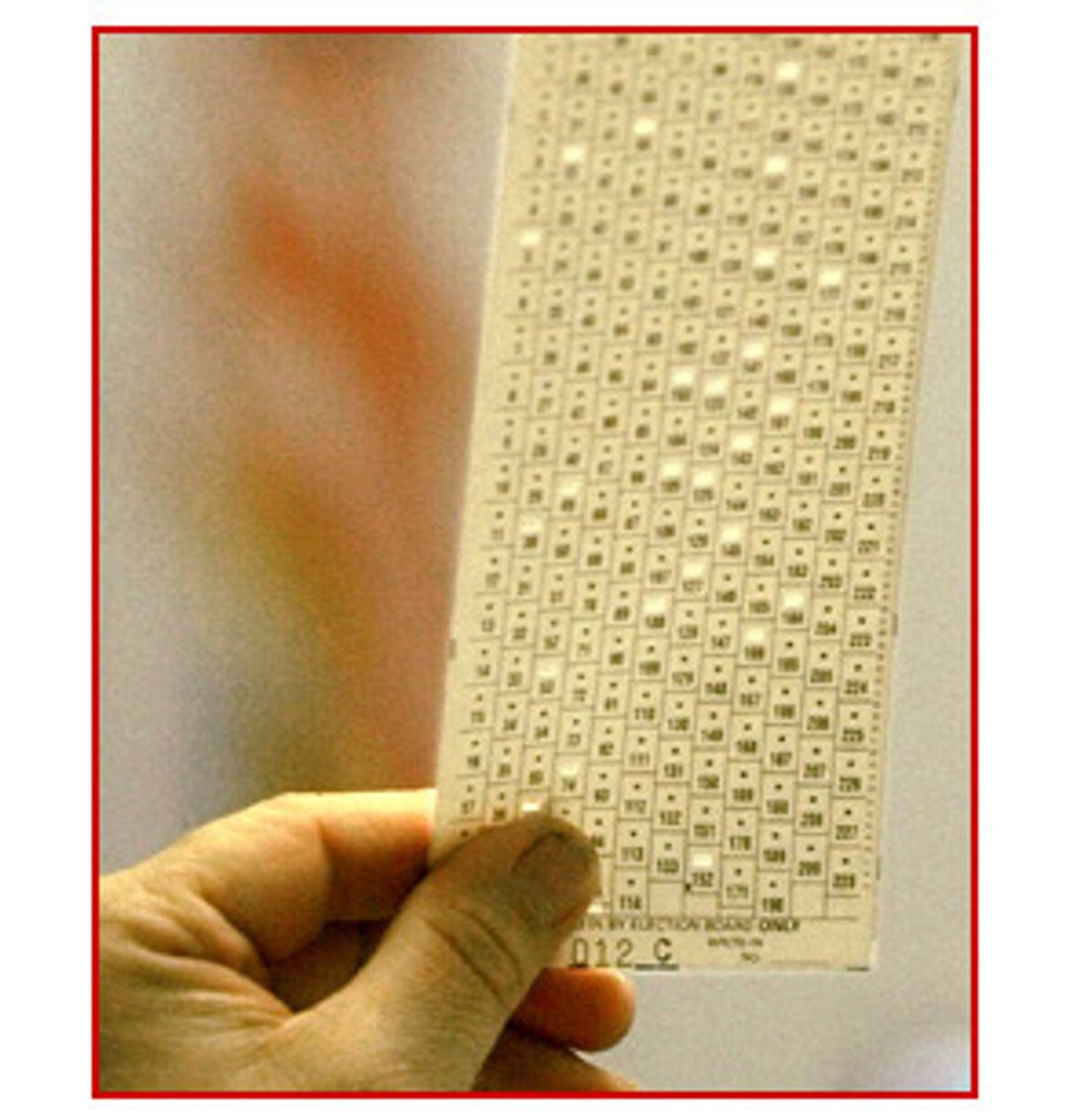 We mock chad. We laugh at chad. Hanging, swinging, tri, pregnant and dimpled, chad has entered the American political lexicon with a bang not seen since President Clinton helped Americans learn just what the definition of the word "parse" is.

But linguistic mockery aside, according to lawyers on the recount committee for Vice President Al Gore, the interpretation of those little bits of ballot may well determine who the next leader of the free world is.

With Gov. George W. Bush up 930 votes after the count of absentee ballots, and the manual recounts in Palm Beach, Broward and Miami-Dade counties not revealing as many votes for Gore as previously anticipated, things don't look all that promising for Gore as of Sunday afternoon. Thus, the Gore legal team -- led by David Boies -- plans to argue before the Florida Supreme Court for the most liberal acceptance of "chad" to rule ballot-counting efforts in the state.

On Saturday, two Gore recount committee attorneys -- Mitchell Berger of Fort Lauderdale, Fla., who has been helping the Gore team coordinate its legal actions with others in the state, and a younger lawyer named Dan Feldman -- peeled away from the larger group to focus on the chad issue. Berger and Feldman are now charged with focusing on preparing legal arguments as to why a dimpled or pregnant chad -- in contrast to a swinging, hanging or tri chad -- should be considered a fair and legal gauge of a voter's intent.

As chad groupies surely know by now, a "hanging chad" ballot has one corner of the ballot square still attached to the ballot, a "swinging chad" is attached by two corners and a "tri chad" has three corners still affixed to the ballot. Acceptance of these permutations of chad is fairly normal, say election experts. Dimpled chads, which are indented but not broken, and pregnant chads, which bulge but again are not broken, are more controversial.

In Palm Beach and Broward counties debates over which chad is kosher have raged not just on canvassing boards but also in court proceedings. Having thus made their way up the judicial food chain, these county controversies may provide the state Supreme Court with reason to rule on a statewide code of chad.

Of course, it is far from a done deal that the Florida Supreme Court will hear the larger case about the acceptability of hand recounts, much less rule on a uniform chad code for the entire Sunshine State. But both are possible.

"We're asking for the objective intent, which is that the officials determining the count determine what the voters' intent was and count their vote appropriately," says Gore spokesman Douglas Hattaway. Contrary to the Bush camp's description of these judgments as subjective, whimsical, possibly partisan and even fickle, Hattaway insists that the chad rulings will be based on "objective standards."

Rejoins Bush spokeswoman Mindy Tucker: "We have not gone into the details of which chad should or should not be counted; we have talked about the overall problem that each county has different standards." Tucker noted that Broward County, a Democratic stronghold, earlier decided not to count ballots with dimples. "But now today, they've changed their mind," she said.

Tapped by the Bush campaign to criticize interpretations of chad in the Florida recount, Republican Montana Gov. Marc Racicot tells reporters at a press conference on Sunday afternoon, "Recognizing they are not extracting the votes Al Gore needs, Gore supporters now want to change the rules halfway through the process by lowering standards ... to reverse the results of this election." In Racicot's view, the Gore campaign is trying to skew the election results in its favor and reading chads is akin to reading tea leaves. "It is entirely a guessing game to determine whether a dimple shows a clear intent to vote for a particular candidate, and those guesses are being made by Democrat-dominated panels," Racicot says.

The Bush team's view of chad -- or more specifically, what it sees as mercurial and inconsistent standards for assessing chad -- will assuredly be cited Monday before the Florida Supreme Court by attorney Michael Carvin of Washington law firm Carvin & Cooper.

Legally and politically, the Bush team's view of Gore's new tack is pretty simple. "They're not getting enough votes out of these manual recounts, so they're trying to change the rules midstream to enable them to get more votes," says one GOP strategist.

Speaking in a conference call with reporters on Sunday afternoon, a Gore attorney in Florida notes that there have been some chad judgments that the Bush team hasn't had a problem with: A partial manual recount in Seminole County, based on various permutations of chad, scored an additional 98 votes for the Texas governor.

And, the attorney says, Texas election code has its own rather liberal chad guidelines, which allow a ballot to be counted if at least two corners are detached, if light is visible through the hole, if "an indentation ... is present" or if "the chad reflects by other means a clearly ascertainable intent of the voter to vote."

Tucker says that the Texas election code's view of chad is one consistent standard for the entire state, for only one recount, as opposed to the whimsy of the Florida chad laws. She adds, "no matter what chad rule you have in a particular county, there's still the opportunity for political mischief, subjectivity and human error."