Goodbye to all that

When my family divorced me, I had my best Thanksgiving ever. 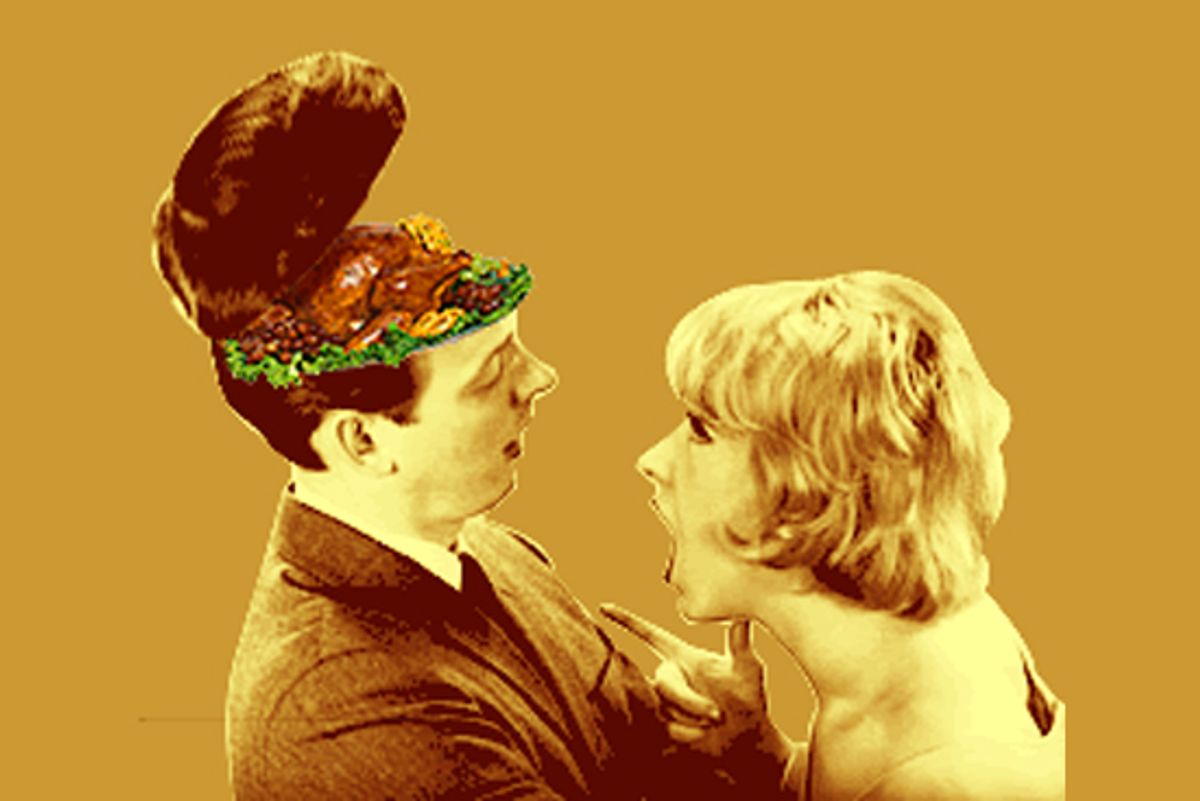 Every year my Aunt Leona undercooked the turkey, and my mother -- her sister -- yelled at her for buying too big a bird. Every year, from the time my aunt got married until the day everyone in my family stopped speaking to me, the story was the same.

When I say undercooked, I mean just that. It didn't matter whether it was a large turkey or a small one, free range or chemically fed. My aunt never learned to cook. My mother insisted it was because she didn't get married until she was 37, and that it was her own fault. "She just isn't organized," my mother would say to the other guests. Then she would pass around the celery stalks and the sour cream and onion soup dip, and my aunt would go in the kitchen and baste and baste.

"Stop opening the oven," my mother would shout. "The temperature will go down, and the damn thing will never get done."

Of course there was stuffing -- raw stuffing. The salad was soggy. The frozen peas were cold. The dinner rolls were burned. My aunt usually put margarine on the table instead of butter.

"The war's over," my father would shout. "I don't eat axle grease."

The mashed potatoes were lumpy. Whoever bought the cranberry sauce selected the kind with seeds. Aunt Leona baked the pies: The pumpkin was runny, and the mince was icky. When the turkey was taken out of the oven (the first time) it was inspected by all of the women in the house. My mother was always first in line.

"It's raw," she would proclaim. "Everyone will get toxemia, or something worse."

Then she would announce to the fathers and uncles, who were drinking beer and watching football, "It will be another hour, boys."

In unison, the "boys," who were all well over 50, nodded and puffed on their cigars and grabbed another handful of Planters' mixed cocktail nuts.

The aunts and mothers all moved to the kitchen and sat around the old square oak table talking about shopping, children and cooking.

My mother never did Thanksgiving, although she was a marvelous cook. Her leg of lamb was fabulous; her turkey was always done, with crispy brown skin and perfect crunchy wings. But when her sister got married, my mother gave her Thanksgiving as a demented sort of wedding present, one that we all lived to regret.

Not only did my Aunt Leona never learn to cook, she never finished furnishing her house. It wasn't because of a lack of money: She owned three houses, and her husband worked two jobs, plus he inherited a large sum of money.

In my aunt's house there were no pictures on the walls; pictures leaned against the walls. She could not decide where to hang them, she said, and besides, nails made holes in the walls.

Every year, just before the big Thanksgiving dinner, Aunt Leona diligently called my mother and her sister-in-law to remind them to bring their card tables and folding chairs. They both complied, though my mother could never resist taking the opportunity to suggest a few home improvements: "Why don't you buy some furniture? There's a sale at Sears." My mother knew where every sale was on any given day of the year.

When we finally sat down at the table set with the linen cloth, crystal glasses and Lenox china, everyone was hungry and mute, except my mother. "Cut away the pieces with the blood," she would command. "Don't eat the blood!"

I believe that is why I learned to love the wings, crispy like dry leaves. My mother saved them for me -- that is, in the days before she and the rest of the family stopped talking to me.

The last family Thanksgiving I attended was in 1975. Everyone -- aunts, uncles, cousins, parents and siblings -- stopped communicating with me in early 1976, right after I announced that I was getting a divorce.

While I was married, my parents complained that my husband did not make enough money. My aunt said he dressed like a hippie. My brother, well, he liked him.

After the divorce, I became the enemy. They told their friends, by way of an explanation, "Gayle has become a radical feminist!" And then they invited my ex-husband into their homes and fed him and gave him money to pay for his divorce.

So Thanksgiving 1976 was all mine. I purchased a fresh free-range turkey and marinated it for 24 hours in wine, soy sauce, garlic and ginger. While it baked, I basted every 15 minutes until it shone and glistened. At 8 in the morning I made fresh hummus and baked pita bread and blueberry muffins. By 10, my table was set with linen, crystal and china. I wore my Indian madras skirt with a white Tibetan shirt. My guests arrived at 3:30 for hors d'oeuvres and champagne.

My turkey was perfect. The skin was crisp from a glaze of honey and butter. My mashed potatoes were smooth and buttery. The cranberry sauce was surrounded with applesauce and mint jelly. I served homemade peach cobbler with homemade vanilla ice cream. We had thin mints.

There were no relatives at my table. No one smoked. There was no football on the television. There was no television set. Several of the guests brought their instruments and offered Vivaldi after dinner. We drank Turkish coffee in the living room.

In the quiet time just after the dishes were cleared and washed, the musicians played. We sat on the red Victorian couch and on the antique rocker and on oak chairs. Everyone was full and relaxed.

When it was time for the evening to end, my friend Mimi stood up and walked from the dining room and down the long hall. Just before she put on her coat to leave, she said, "Gayle, those are the most beautiful lithographs I have ever seen -- and you have so many of them. I love what you've done with your walls."

Gayle Leyton, a poet and writer in San Francisco, has been a high school English teacher, a law clerk and a jewelry designer.