The bar is closing, but why don't I feel like taking either presidential candidate home? 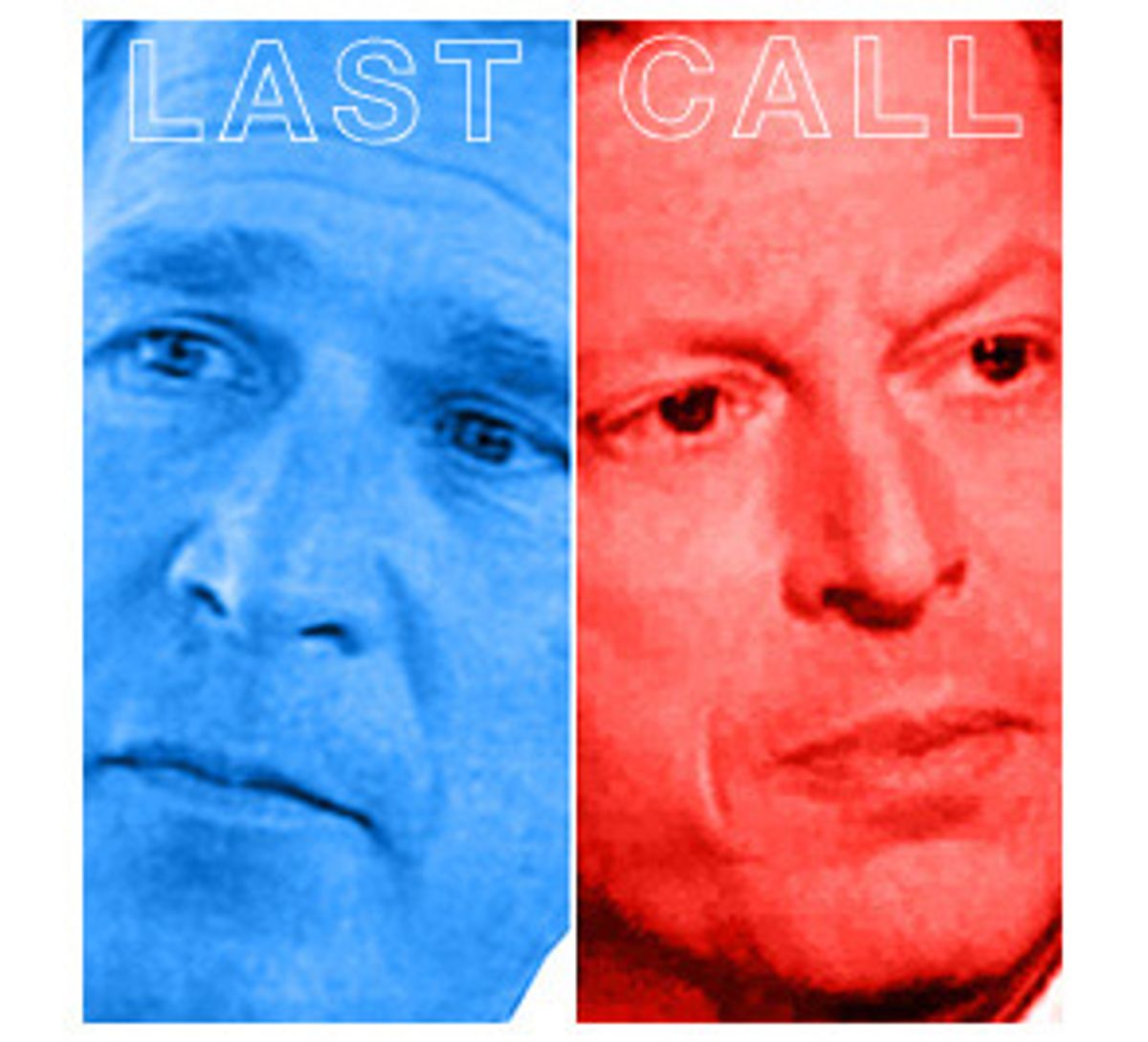 Last call was usually my cue to canvass the sorry collection of men still standing in the bar and pick the poor idiot to take me home. And that's exactly how this election mess in Florida has left me: horny for a real man but willing to settle for a facsimile as soon as the bartender makes last call. But the bar doesn't seem to be shutting down anytime soon, even though the clock is past closing hour, leaving me ripe and ready to compromise my standards -- though not while the booze is still flowing. Because the booze, you see, is what will make either man easier to swallow.

So here I sit with my left hand on Al Gore's knee and my right hand playfully sizing up George W. Bush's bicep. Both of them are blabbering slick pickup lines in my ear. Not that I believe any of their shit, but I appreciate the effort they make to sound sincere. One look at Gore and I see that if his dick is as stiff as his demeanor I might be able to make some use of him. Then I glance at Bush and two words come to mind -- words that would be unattractive if not for the self-inflicted film of sexiness brought on by the booze -- and those words are "grudge fuck."

This is my selection. Surely the victor will erect himself soon because for chrissakes someone has to fill this aching void.

But Jesus God, here it is the day after, and the day after that and the day after that and ... oh, God, I've been dry-humped so hard I can send smoke signals from the friction. By now I should be chiseling my way out of a dried cocoon of sperm, but instead I'm right where I started, disheartened but horny, ready to surrender myself at the first sign of invasion, but neither candidate has the nuts to conquer me. I'd laugh if it weren't so sad. "Is it me?" I begin to think. "Am I not sending the right signal? Are they waiting for a written invitation?"

Turns out that's exactly what they're waiting for, which doesn't help me. Nor does the bright morning light, because it's shining directly on Bush and Gore, who are each looking less attractive as time wears on. Bush has a face like a bucket of paste and Gore is as animated as a telephone dial signal. "What was I thinking?" I say to myself. I'd go home alone if I could, but by now I'm locked in here with these two guys, as well as all their pundits and professional political dick suckers. This is a clusterfuck for sure, and not the fun kind.

So my emptiness still aches. By now, I should have been screwed by one of the candidates -- it would have been cheap, but needed -- but instead I'm left untouched and listening to them in the light of day as they each keep promising what a great lay they would be if only they were let in. One says I already picked him, so he's standing there with his dick in his hand, and the other insists the picking is still in process, so the time for fucking is in the future.

If not for the booze it would be unbearable, so my only option is to forgo a glass and just have the bartender pour the alcohol directly into my mouth. Later I'll have to look for my liver, which by that time will have escaped from my body out of self-preservation and will be found on the road hitchhiking its way to a healthier host. After a few hours of drinking like this, even Katherine Harris (who looks like Nancy Reagan's retarded cousin who has been kept locked in a crawl space all these years) will seem appealing -- but I know I can't go there because she's Bush's personal butt lick and he's probably possessive about his bitches.

So even though the finish line keeps getting pushed farther away, the certainty that it has to be one or the other doesn't change. Sometimes I weaken and whine, "Why can't I have that one?" pointing to Wolf Blitzer or Ted Koppel or Candy Crawley (if I'm gonna go lesbo, I want her to be big) or any of the other professional pie holes on TV, but my selection is limited to these two. Gore and Bush, one or the other and not neither. Like I said, it would be depressing if not for the booze.

As for the phrase "hanging chad"? It sounds like the name of a well-paid porn star, but actually it's just a piece of confetti more flimsy than the candidates' campaign promises. It's the fleck of paper left partially punched out of the voter's card, indicating or not indicating the voter's preference. Both Bush and Gore blather about the hanging chad as if it's some kind of sex toy, and their performance very well could hang on the hanging chad. Gore says it's necessary to do the job right; Bush says he doesn't need it to get the job done. In addition Bush keeps pushing "closure," and he's ready to plant the flag on me even though it might mean date-raping my political integrity, and Gore keeps bellowing "fairness," which would be wimpish if not for his past penchant for doing it over and over and over again.

In the meantime here comes the bartender, ready to fortify me for another night. He's been serving me the same brand since the beginning, and the label on the bottle reads "Ballots." As he pours me another shot, I'm struck again by the same certainty that has been both portentous and eagerly awaited since Election Night so long ago: In the end, either way I'm getting fucked.

Hollis Gillespie is a writer in Atlanta.