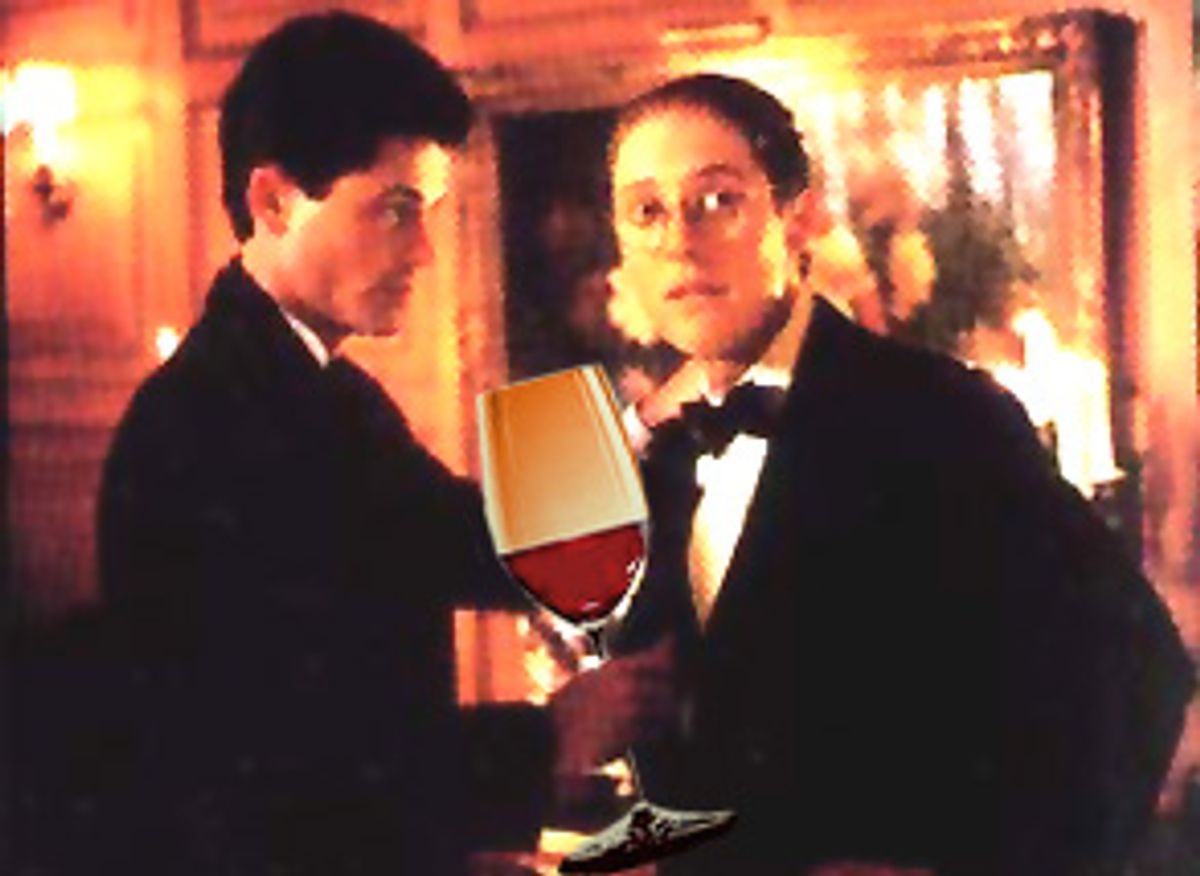 People my age fall into two camps when it comes to Jay McInerney: They either recall with misty fondness reading "Bright Lights, Big City" one swift afternoon back in the '80s, or they hate his stinkin' guts and wish he would go away forever. I tend to fall into the first camp. There are times, however, when I drift toward the second (though not to an extreme degree). McInerney is a gifted writer (and don't believe anyone who tells you otherwise), but he can seem lazy and self-derivative, as if he's coasting. Sometimes, he disappoints.

This was the case with his last book, 1998's "Model Behavior," which contained a short novel with the same title that was essentially a reworking of "Bright Lights, Big City." The characters were all older, though not much wiser, and McInerney's signature theme -- the corruption of youthful idealism by the cold reality of affluence -- was present, but otherwise the effort felt phoned in, a bit tired. And 1996's "The Last of the Savages," his last real novel, was ambitious but also meandering and, for a hillbilly aesthete such as me, irritating in its preposterous depictions of Old South gentility colliding head-on with the counterculture. In fact, the last McInerney offering I truly dug was "Brightness Falls," his 1992 response to Tom Wolfe's "The Bonfire of the Vanities."

Here was McInerney, the last Fitzgeraldian, in top form, and painting on a wide canvas. A satire both of '80s Wall Street and of the publishing business (his caricature of Harold Brodkey alone is worth the price of admission), the novel was also richly compassionate. The Boston Globe called it McInerney's "most giving" book, an affectionate verdict for an author who once posed as a Ninja warrior on the cover of Esquire, poised to decapitate his critics, and who was often lumped in with the "cocaine novelists" (as Lev Grossman once put it) of the Reagan years.

Unfortunately, McInerney has thus far failed to live up to the promise of "Brightness Falls." True, it's slightly ridiculous to fault a writer who with "Bright Lights, Big City" did succeed in capturing, in fewer than 200 pages, an entire decade -- a now-vanished but still influential moment -- in the life of America's most vital metropolis. (McInerney himself said that he was lucky to have written that one "zeitgeist" novel.) Still, an impression of wasted days fell upon his fans.

The profiles he contributed to the New Yorker were slickly spun fluff, literate candy of the sort that seemed more at home in W or Vogue. He was obsessed with models. And celebrities. And the social hierarchy. His fawning interview with Julia Roberts drove his second wife to a face-lift. He co-wrote a screenplay, about the premature death from AIDS of supermodel Gia Carangi. Improbably, "Bright Lights, Big City" was made into a musical, which was widely ridiculed. Clearly, Jay Mac had slipped over the edge. Clearly, Jay Mac had shot his wad.

Or had he? If the '90s demonstrated anything, it was that the old notion of becoming a famous novelist had lost much of its shine. What, after all, did an accomplished young writer like McInerney have to look forward to after that initial flush of success? The lunch basket at Yaddo? A career teaching moody collegians the gospel according to Raymond Carver? Getting spiked by Alec Baldwin at second base in the annual East Hampton artists and writers softball game? Yet another lunch with Binky Urban? Day after soul-sucking day at the computer, struggling to fabricate plots, when -- goddamn! -- there was vastly more fun stuff, not to mention snazzier people, to be found outside?

Arguably, McInerney and his literary compatriots -- Bret Easton Ellis, Tama Janowitz, the usual suspects -- had arrived at precisely the best and worst time to be coronated as novelists. Best because more people were reading than ever before and because the baby boom was pushing its last members out into the book-buying population. And worst ... for the same reason. The reading public was changing, as was the culture itself. Writers, regardless of how talented or controversial, simply didn't rate magazine covers anymore.

Credit McInerney for figuring this out, and for (stealthily) finding a new line of work, one that he is probably better suited for than writing novels. For the past few years, he has contributed the "Uncorked" column for Condé Nast's House & Garden, and I won't be going out on any limbs if I maintain that, in doing so, he has become the best wine writer in America. "Bacchus & Me" bears this out, collecting no less than 48 uniformly witty and informative H&G pieces about all things viticultural, from French Champagne to the "wine goddess" of California's Napa Valley.

Even better, "Bacchus & Me" reveals, in ways that reading the columns in isolation can't, how McInerney has worked his old novelistic preoccupations into his writing about wine. You can see how this would restore some spring to his step. Rather than sitting around some apartment in New York, trying to bang out another 400-page novel that his critics would just murder anyway, McInerney was able jet off to Bordeaux and Piedmont in search of the '90s wine boom's fattest quarry. Along the way, he got Condé Nast to pick up the tab for his passion. (And believe me, his passion isn't cheap.)

There are other wine writers -- redoubtable Brits Jancis Robinson and Oz Clarke leap to mind -- who have managed to weave together fine writing, personal narrative and considerable knowledge with greater aplomb than McInerney does. But where Jay Mac surpasses them is in his sure-footed ability to enter a realm of luxury, rife with lively and tendentious personalities, and figure out who really matters. Most wine writers focus on the product first and attune themselves to the social burlesque, pick up the inside baseball, later. Not McInerney. It's not as if his tasting faculties aren't notable -- they are. (And if Lyons Press had included his concise notes in the collection, readers could see this.) It's just that they are secondary to his considerable ability to survey the vast sweep of European and American winemaking and suss out the genuine players.

For example, McInerney is a thoroughgoing, self-confessed Robert Parker Jr. acolyte. For the uninitiated, Parker is the single most powerful figure in wine, a Maryland lawyer and Ralph Nader devotee who in the late '70s began publishing the Wine Advocate, an ad-free newsletter that introduced Americans to his now-widespread 100-point rating scale, his belief that most wine critics are shills for the booze business and his controversial preference for big, fruit-forward wines. (A relatively low Parker rating -- a 75, say -- can ruin a wine, particularly an expensive premium wine from Bordeaux or California, and his critics complain that his preference for "large and in charge" vintages is producing a unidimensional international style of wine.)

McInerney has studied his Parker as closely as he once pondered the Manhattan social whirl. The master's ideology shapes Jay Mac's taste, something that only becomes obvious when one reads all the H&G articles in sequence. You could suggest that this means McInerney is a toady, but the truth is that he's merely efficient. By zooming in on Parker, he eliminated the need to slog through all those less important and less influential wine writers. This is vintage McInerney. He is not, after all, a guy who, when he chose to become a novelist, went off and studied with a slouching old coot at Podunk U. He chose Carver, who in the '80s was the most significant figure in American fiction.

McInerney's canniness becomes more apparent as the collection moves along. He starts out by introducing readers to different styles of wine, but this kind of plug-and-chug journalism fails to fully satisfy his desire for lifestyle climbing. Gradually, the big kahunas of California and the vintner aristocrats of Europe become his beat. By sticking to it, he delivers a series of snapshots of the wine world's key '90s personalities: California hired-gun cult winemaker Helen Turley, who produces wine of such celebrated quality in such small quantities that you need to be on an exclusive mailing list to obtain any of it; Robert Mondavi, the godfather of premium wine in America (and the original Napa pretender to European-style viticultural nobility); Chateau Ducru Beaucaillou's Bruno Boire, a dapper gold-plated Bordeaux superbachelor whose pot-au-feu lunches for his female admirers, not to mention his generous ways with his stash of Chateau d'Yquem, have McInerney literally drooling with envy from the moment he turns into the driveway; Italian wine maestro Angelo Gaja and his speeding BMW 750; Jean-Luc Le Du, the rock 'n' roll sommelier at Daniel Boulud's namesake New York restaurant; and so on.

McInerney even sets up a Fitzgeraldian East Egg-West Egg rivalry in the American winemaking heartland, the Napa Valley. Down on the valley floor hunker the old-guard flatlanders, while up on the hillsides dwell the young turks ("guerrillas," according to McInerney). It's an old money/new money distinction -- the flatlanders might as well be Knickerbocker blue bloods to the hillsiders' go-go arrivistes. Now, the valley vs. the hills rivalry has not been lost on the rest of the wine press, but only McInerney's powerful social radar could zero in on the real story, the two sides eyeing each other warily across some of the most financially productive real estate in America. McInerney also pushes his luck here, raising the hillsiders -- who make limited-production, ultrapricey cult wines -- to Bordeaux-like "first growth" status. It's a risky bet, because most of these wines haven't been around long enough to prove themselves. But the rugged individualists are all in the hills, and McInerney can't resist their maverick allure.

McInerney's bacchanal culminates, somewhat repulsively, in an authentic binge. As the millennium turns, he and his crew of wine cronies -- Robinson, Julian Barnes, Auberon Waugh, Stephen Fry -- whip up a series of gourmet dinners in London and wash them down with many thousands of dollars' worth of extremely fancy wine. Compared with the genial amateurism, the deft Candide's progress, that has preceded it, this account of unabashed glugging ends the collection on a sour note. McInerney, who for the bulk of the collection has presented himself as a wide-eyed ally of the insecure reader, suddenly looks more like a glutton who has given in to the uglier side of his nature -- who has betrayed the Parker-esque advocacy he convinced his readers he was pursuing. This is unfortunate but hardly a huge knock on the overall effort, because one could spend a lot of money and a lot of time sorting out the maddeningly wide world of wine. Or one could read McInerney and, in a few hundred pages, learn just about everything anyone really needs to know.