A struggling comedian takes on the beauty elite with an exhaustive, lifelong program of "approaching" (please don't call it "accosting") models and actresses on the street. 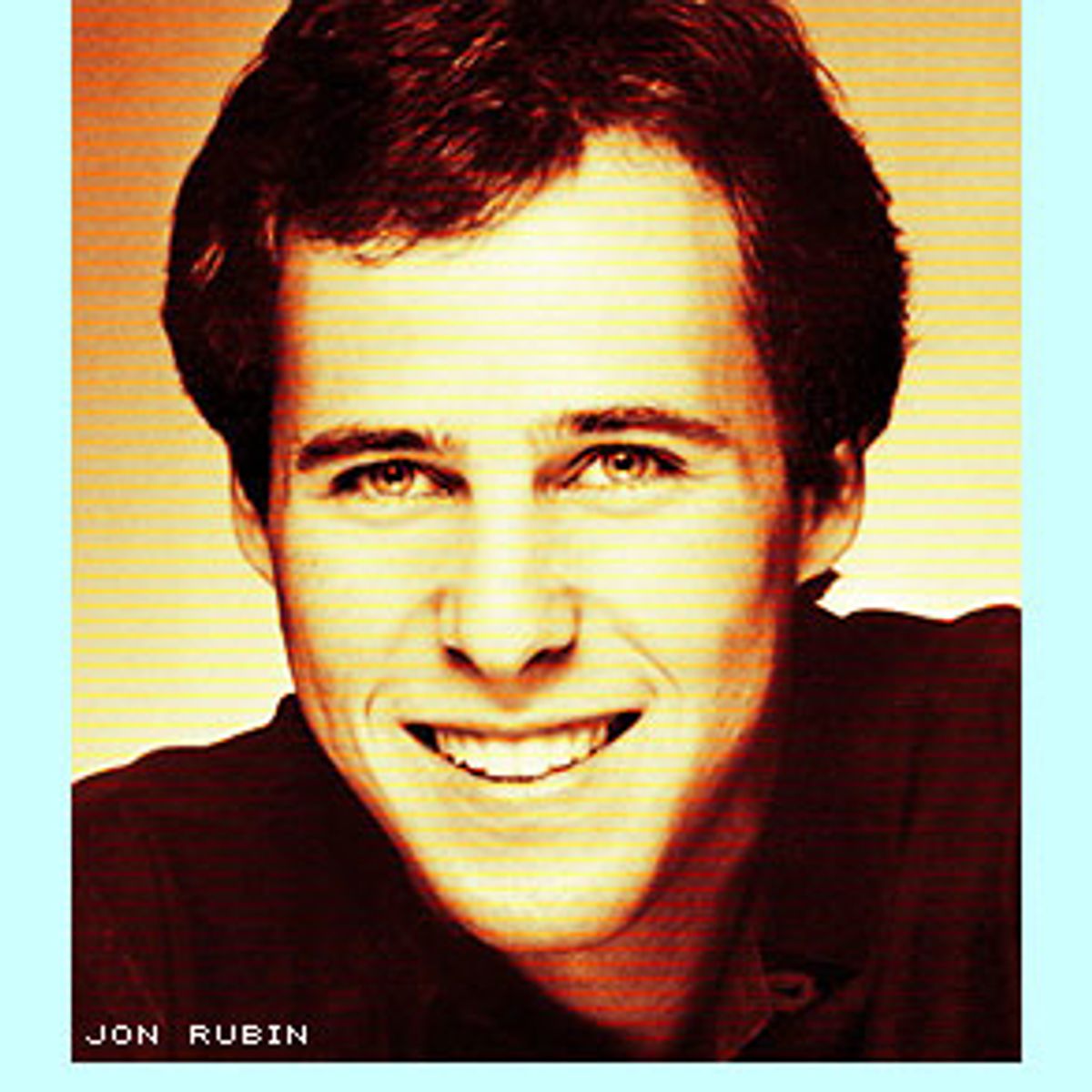 There's a theory that humans gravitate toward a mate whose physical attractiveness roughly parallels their own, all other things being equal. In New York those other things can be wildly unequal, hence the babes (in both senses of the word) hanging on the arms of Donald Trump, Woody Allen and many rich guys you've never heard of. Jon Rubin, a struggling comic and PBS programmer, is neither wealthy, famous, powerful nor handsome. Yet he seeks to transcend his station every day, chasing the holy grail of what he calls "women in the 99th percentile of looks."

Rubin knows that "women who look like that want guys with money or power or high-level something, which is fine. I'm holding out, too, for a hot woman, sort of a trophy woman, I guess." (I like this logic of parity. I want Liam Neeson, and Liam Neeson probably wants something he can't have, too. Ergo, we are compatible.)

Rubin, 37, balding and slightly pudgy, describes his prey as "10s," "stunning," "supermodel-looking" or, most frequently, hot, exhaling the last word as dramatically as if those long legs and sharp cheekbones literally burn. His m.o. is simple: Whenever he sees a beauty on the street or subway or anyplace public, he tries to engage her in conversation and get her phone number. He calls these encounters "at-bats" and says he comes away with a phone number once in 20 attempts.

"The best way to do an at-bat is to walk along with them, acting like you were going in the same direction and start talking," he explains. "You might walk 10 blocks to establish a rapport, and it's usually 10 blocks out of my way to wherever I'm headed. I only usually go after one a day, because it takes a lot of time plus they have to be gorgeous ... I'll walk along, and at the first opportunity I'll use my line."

Rubin asks me not to reveal the line in this article because he's working on a documentary about his "approaches." (He prefers that term to "accost" or "stalk.") For the half-hour documentary, a crew filmed Rubin's at-bats with hidden cameras, including a pinhole camera in the strap of Rubin's bag for close-ups. After the at-bat, the producers approached the women, told them they'd been filmed and asked to interview them about the encounter. The piece is still being edited, but the producers have just completed a three-minute trailer they'll use to shop the show to TV programmers.

Of the embargoed line, Rubin says, "I let go of it if there's some way I can be in the moment," he explains. "Like if she's French, I'll use my Franglais, which is very funny. I prefer in the moment. Like any comedy, in the moment is stronger than any prepared material, it cements it as a unique experience ... Taking an at-bat is very much like performing -- you're immediately onstage and trying to control the situation."

The line doesn't strike me as particularly precious intellectual capital, but this is a man who copyrighted the phrase "the Jewish Victor Borge" for his live comedy act. In that act, an "evening of musical interplay," he plays piano, sings and banters with Tamar Schoenberg, a "hot" singer-actress who briefly dated, then rejected him years ago. His desire and her refusal are the subtext of the show, which ends with both Schoenberg and Rubin dancing in black stockings and skimpy tops.

I watched the trailer for the documentary "So Many Women, So Little Hair" at Rubin's apartment on the Upper West Side. Even more than his live act with Schoenberg, the three-minute teaser makes Rubin the butt of the joke. He's photographed to look even schlubbier than he does in real life; the opening credits roll over a shot of the top of his balding head.

The editing is the meanest I've seen since "Survivor." Rubin asserts, "Women don't mind my hair." Cut to a blond saying, "I know I'm supposed to be able to get past bald, but I just can't." Rubin: "I'm above-average cute." Brunet: "He's not that cute." Rubin: "She wouldn't go out with me because she had a boyfriend." Different blond: "I'm actually newly single; I just told him that to get rid of him." And so on. Rubin loves it; I ask him, as a comedy professional, to tell me what makes it funny.

He makes no mention of being completely dissed; to him it's an inspirational film. "The encounters I have with the women I try to pick up are exhilarating and interesting and fun, and the sheer volume of it creates a comic aspect. Plus, I'm funny and quick, the things I say are funny ... I think there's a message to guys in here, too. Most guys have an angst about 'should I talk to her?' I have removed that from my life. I always take the at-bat. Most of the time it doesn't work, but sometimes I hit a home run and I end up going out with a really hot girl who's smart and funny, who I like."

Rubin's been doing this since his college days at Harvard (the fact that he went to school there is something he weaves into his conversation with amazing frequency). He's after long-term relationships, not casual sex. "I get all my girlfriends this way. I've had four serious girlfriends in the last 15 years, which have lasted about two years each. But in between, I'm either dating women from this or I'm doing this." Of the four girlfriends, "Three were Playboy-looking, and the fourth was moderately attractive and brilliant," what Rubin calls the "B-plus woman."

When asked what tends to happen after two years, Rubin shrugs, "Women have a lot of needs ... I'll be dancing as fast as I can, givin' 'em everything I got and it's not enough ... They seem to need some depth of emotional connection that I maybe don't have access to."

Most of the beauty elite aren't needy so much as thoughtless, according to Rubin. After he's gotten his one phone number in 20, he says, "Then you have to overcome the beautiful-woman approach to dating: never commit to a night in advance, and then blow you off right before a date. The first four times I scheduled dates with [a hot 22-year-old he's seeing now], she blew me off ... But if you maintain a sort of lax attitude, that you don't care too much, they like that."

He prefers the company of the B-plus women, but not enough to lower his standards. "A lot of these gorgeous women are humorless ... Moderately attractive women tend to be brighter than hot, hot women, or more interesting," Rubin muses. "I don't know why God decided to do that." In another cruel twist of fate, Rubin says, "Moderately attractive, really bright fun women seem to fall in love with me immediately, and I don't want to lead them on." He tells the sub-10s that he will have "booty-call-type sex," but not a relationship, with them.

The longer I talk to Rubin, the more confused I get. He doesn't like most of these women, and they usually reject him. Is the sex that much better? He answers with a "you've-got-to-be-kidding" laugh. "You know how hard it is to have sex with these women? I rarely succeed at that level ... I succeed at the lower-level booty call kind of sex more, the woman who's not hot but is OK for just fooling around."

He insists it's not about status or about sex. "The sex is amazing with women like that, but the goal is the relationship. But that's like impossible. You're lucky to get them to turn off their phone for an hour so they can be with you. A lot of the ones who look like that are models and actresses and really ambitious, so they're always looking for the better offer that's just around the corner."

So what makes the beauty elite worth the trouble? Every time I rephrase this question, Rubin's answer is about performance. Being with a real beauty as opposed to someone just OK is, Rubin explains, "like how Jerry Seinfeld describes doing stand-up, a heightened sense of reality. Everything is electric when you're onstage. The air is sweet, it's like some kind of candy. There is something like that, it's like hyperreality to be with a beauty. Not just the sex, but being near their aura, they give off a vibe."

I asked Rubin's comedy partner, Schoenberg, if she thought Rubin was a New York type, the "modelizer" Candace Bushnell wrote about in "Sex and the City." Schoenberg replies that if he's typical of anything, it's comedians. "There are a lot of comedians who are maladjusted. They tend to be emotionally cut off or just emotionally off. A lot of them hit on lots of women, it's sort of pathetic."

It's a sexual currency I've never seen before: Instead of wooing the beautiful girl with money, fame, talent, charm, looks, patience or attentiveness, Rubin offers up a weirdly confident self-abasement. I ask him about his capacity for humiliation: the 19 rejections out of 20, hearing the women diss him in the movie, ending his act dancing in his tighty-whitey underpants and stockings, hairy arms and back bursting from the black camisole.

He says, "As manager of comedy programming at HBO for years, I saw a lot of people perform and I saw a need that's so sickening to me among performers to make people watch them. My show is an apology for making people watch me. It's like, 'I'm ashamed, I can't believe my need to entertain has led me to this, to wearing a Bob Fosse outfit. What happened to me as a child that makes me have to do this? I'm just sorry we all have to go through this.' That's my subtext, my shtick, my persona ... In the movie, I'm like, 'I'm sorry, I wish I didn't need to have a hot woman but I do.' But I'm not judging myself. I'm using it to my comic advantage."