"Anything Goes!" by Larry King

In his new book, the CNN host reveals what it's like to talk policy with presidents and sing show tunes with Marlon Brando. 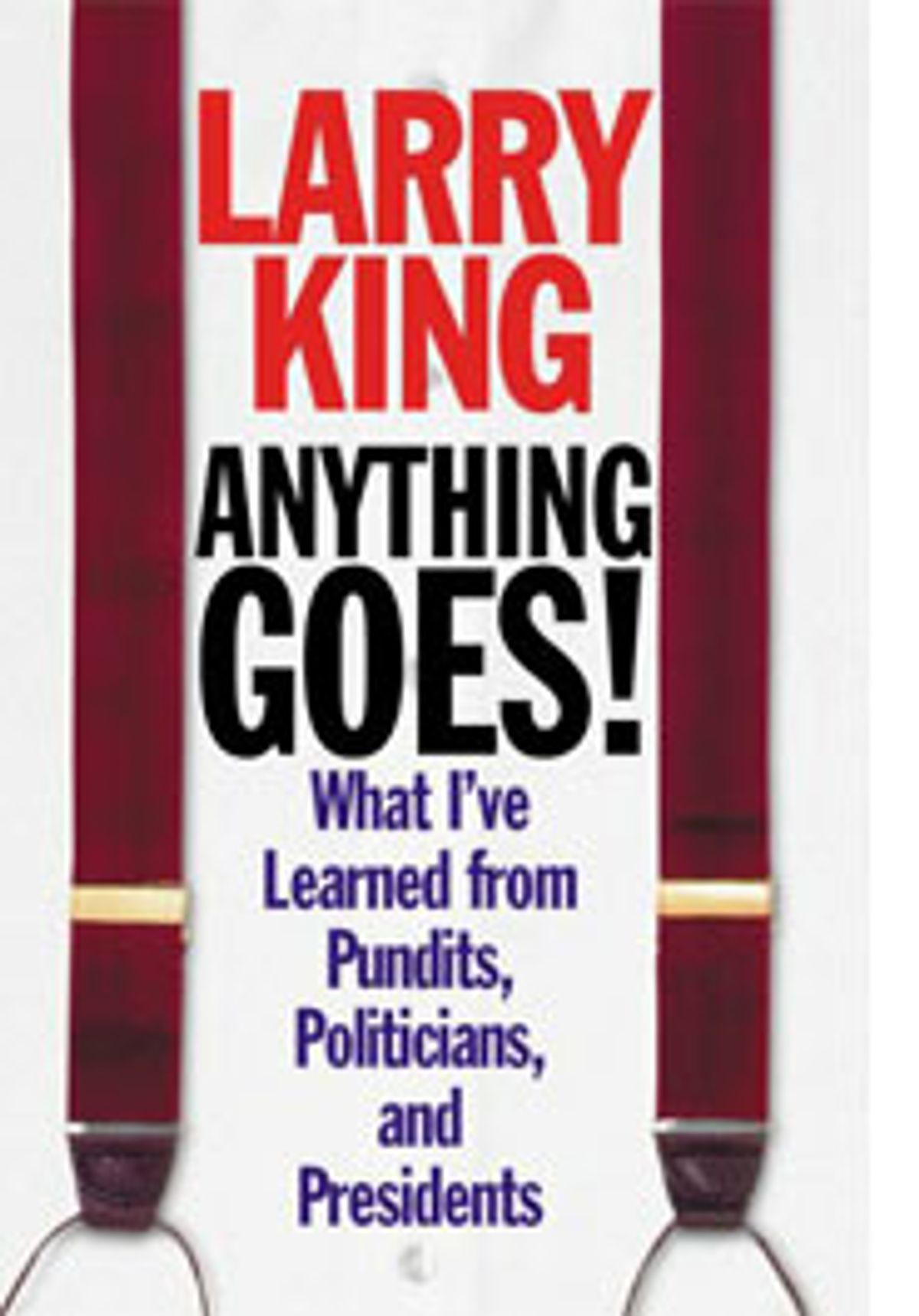 Larry King could have given his new book, "Anything Goes!" any number of subtitles: "A Man and His Clicker," "My Strange Love Affair With President Clinton ... and Marlon Brando," "Everything I Know I Learned at Lunch," "Folksy Talk From the Guy Who Took Off the Filter."

But here's what he did subtitle it: "What I've Learned From Pundits, Politicians, and Presidents." As it turns out, the host of CNN's "Larry King Live" hasn't learned a whole lot. And, bless his heart, he's not afraid to admit it. "Always having an answer isn't a good thing," King writes. "Sometimes, you just gotta say 'I don't know.'"

There's a lot King confesses he doesn't know. ("I should look into owning the words 'I don't know,'" he muses, "since I use them all the time.") In fact, he seems to revel in his own innocence. His political predictions, he admits, are nearly always wrong. And his news instincts are faulty at best: He never thought Clinton had a chance at the presidency, figured the O.J. Simpson case for a "two-, maybe three-day story" and "saw the Elián story as a 10-minute Judge Judy." King depends on the fellows he frequently lunches with -- some of whom are buddies from his Brooklyn, N.Y., childhood -- to tell him when a news story is "a miniseries" or a flash in the pan.

Even as the talk show host is making news on his own show, he often hasn't a clue that he's doing so. Remember when, back in 1992, Dan Quayle told him he'd "support [his] daughter" if she ever decided to have an abortion and incited a major media pile-on? King still doesn't think that was news. Or when Marlon Brando appeared on his show to take "the Jews [who] run Hollywood" to task about stereotyping minorities: "We've seen the nigger, we've seen the greaseball, we've seen the Chink, we've seen the slit-eyed dangerous Jap, we've seen the wily Filipino. We've seen everything, but we've never seen the kike"? King says he "never thought the exchange was going to create a problem for anyone."

King seems to take a certain pride in having experienced so much and met so many people -- interviewing world leaders, despots, comedians, movie stars -- and having learned so little. He just asks the questions; he doesn't have to understand the answers. "When you don't have answers," he writes, "there's not much to say, unless, of course, you're on a TV program." Or, he might have added, writing a book.

King's big revelation is this: "The most important invention of the twentieth century wasn't the cure for polio or the Wright brothers' flight or unleaded gasoline or talk shows. It was the remote control." He learned this lesson from "60 Minutes" executive producer Don Hewitt. "Control is moving away from the outside and toward each of us," King continues. "The clicker was the first step in that direction." And while King admits that he couldn't grasp this deep concept when Hewitt first conveyed it to him in the late '80s ("I thought ... he was crazy"), he has since seized upon it with impressive vigor, bringing it in as a leitmotif throughout this story and carrying it just that much farther.

"When I got back to my hotel that evening," he writes, "I followed what has become a routine whenever walking into a room: Turn on lights and pick up the clicker and turn on the TV (I'm able to do this in any city and with any television: Sony, Philips, Magnavox, Panasonic -- doesn't matter)." He can use the clicker in any city, with any kind of TV? Amazing!

If all this clicker talk has images of Chauncey Gardner dancing in your head, you're not the only one. King's "Being There"-esque "Forrest Gump"-iness is his stock in trade. Those world leaders, despots, comedians and movie stars talk to him because he's just a regular guy, a self-described Jew with a "simplistic view of the world via Brooklyn," who can't quite believe his good fortune in being able to sit across from them and -- well, golly! -- talk to them about stuff.

Consequently, these friendly folks open up to him like Forrest's box of chocolates. He never knows what he's going to get. One minute President Clinton is talking to him about loneliness, dating and his own interest in having a baby late in life, the next Bob Dole is confessing that he's "in trouble" midcampaign. One minute he's cruising the streets of Beverly Hills in Brando's white Chevy, singing show tunes and swapping acting tips with the big man, the next he's running into O.J. outside the courtroom in which he's being tried for murder ("Juice, good to see you!") and the next Slobodan Milosevic is congratulating him on the birth of his son, Chance. As King notes at the end of almost every chapter -- and sometimes in the beginning and the middle, too -- in these wacky times "anything goes."

King has never claimed to be the brightest tube in the TV set ("Folks, it's a talk show. It ain't rocket science"), but he does claim to have changed history -- with a little help from Clinton. "You know why I can stiff you on press conferences?" the president asked a roomful of radio and TV correspondents back in 1993. "Because Larry King liberated me by giving me back to the American people directly." Things were different after the 1992 election, King says, because he removed the journalistic filter between the candidate and the public.

If King's self-effacing formula works on TV, it's less successful on paper. Viewers tune in to King's show to hear what his guests have to say, but presumably they're reading his book to find out what he has to say -- and "I don't know," while honest, is not a particularly satisfying answer. The on-air interludes King relates in great number may be entertaining (Al Franken's comments on the Monica Lewinsky scandal are classic), but on the whole, they're not particularly fresh. The off-camera dish is a little bland and skimpily portioned. And the proposed solution to media overload he offers as dessert is less than wafer thin.

The boundary of when "too much" begins has disappeared. I grew up when there were three networks. Today we have hundreds of satellite-delivered networks, cable, the three original networks, and PBS. And we're trying to learn how to make it all work. The first step, of course, is to put ESPN on the same cable or satellite channel in every city. Once we do that, the rest of this is a piece of cake.

I could be wrong, but I think he might be serious.