Thousands of new documents released in the case debunk persistent myths about the motives of Eric Harris and Dylan Klebold. 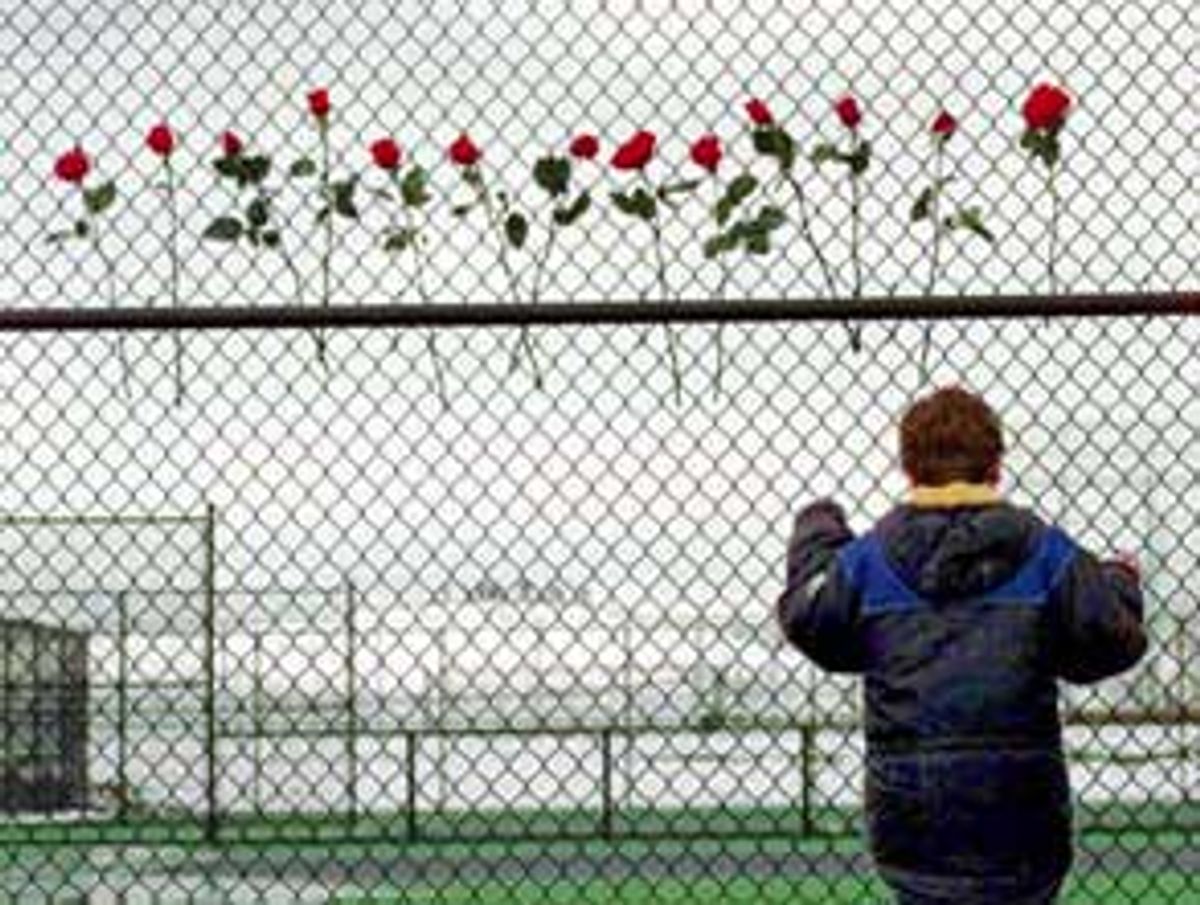 The material released Tuesday filled four large storage boxes. County spokesman John Masson says it amounts to a "substantial" portion of the data available. But it omits a great deal of crucial evidence -- including autopsy reports, thousands of photos and medical reports of the victims -- that could be useful in lawsuits that have been brought on by families of Columbine victims.

Among the most compelling documents are 16 pages of testimony from Patty Nielson -- the teacher famous for making 911 calls from the library as the killers rampaged through the building -- that effectively refute the most misleading myth of all: that the entire tragedy was intended as a horrible attack on jocks, blacks and Christians.

The testimony substantiates an argument investigators have been trying to make since September 1999: The massacre at Columbine was random and indiscriminate -- it wasn't based on targeted groups or a hit list. (Though several so-called hit lists did exist, they don't appear to have played any role in the final killings.) Material leaked from Eric Harris' diary and the so-called "Suicide Videos" supported that conclusion, but it arrived months after the conception of the attack was firmly planted in the public perception. And for several days after the massacre, the media drove home the message that it was directed against jocks and blacks, with relentless attention to the now infamous line "All jocks stand up." Until now, investigators have refused to release significant testimony from the attack to effectively dislodge that misperception.

Nielson repeatedly describes killers Harris and Klebold moving methodically through the library, pausing to torment their victims before shooting them, seemingly indiscriminately.

"It was her belief that the suspects were going around and shooting every student who was hiding underneath the tables," the interview report states.

At one point in the testimony, Nielson recalls one of the killers yelling "Kill all the jocks." At one another, she hears one say: "What do we have here, a nigger?" -- presumably before the murder of Isaiah Shoels.

"Patty Nielson stated it was clear in her mind the suspects were attempting to humiliate the victims prior to shooting them," the document says.

She says the killers repeated their demand that everyone "get up" several times, and describes them heckling any number of students, for the most trivial reasons. She says one killer asked, "Whatta we got her, a fat boy?" His partner responded that he could "do whatever you want with that one, I don't care." Another student was taunted for his glasses: "You think those glasses look cool[?]"

Because Nielson remained hidden beneath the library's front counter as most of the shootings occurred, she was often unable to ascertain which killer said what.

Tuesday's release included more than 500 detailed pages about killers Harris and Klebold -- offering a far richer portrait than anything else yet released about the pair.

A graphically violent English-class essay by Klebold portrays a protagonist in a black trench coat with a duffel bag brutally executing "college preps." His creative writing teacher, Judy Kelly, described it as "the most vicious story I have ever read." Kelly met with a guidance counselor and Klebold's parents to discuss it. She was recently added to a lawsuit charging that various officials were warned of the coming attack.

The release provides the first direct windows into the responses of the killers' parents. Several investigators, including lead investigator Kate Battan, decried the widespread blaming of the parents, particularly the Klebolds, in September 1999. "It really does begin with the family," Battan told Salon News at the time. "But I'm here to tell you, I sat down and I've spent a lot of time with the Klebolds, and they're nice people. It's not like they're these monsters that raised a monster. I mean, they truly are clueless about any warning signs that this was going to happen." However, the parents remained in seclusion, and investigators remained mum on discussions with the families. The new documents detail the interviews conducted during that time with the families. They present a portrait of the Klebolds as immediately cooperative, and the Harrises as far more wary.

The documents also reveal a whole new level of detail as to how the case was investigated, and the way witnesses were questioned. Many of the reports are short and unenlightening, but others, like Nielson's, chart how information was revealed gradually over the course of a lengthy interview.

"As Patty Nielson continued to reflect on the incident in the library she began to recall additional details," the report states, "...at one point during the incident she remembered hearing a boy being confrontational with [the killers]." Nielson stated that the confrontation was strictly verbal, but remembered hearing the unidentified male student state words to the effect of "that's enough, he's dead."

While the release may help dispel some of the major Columbine myths, the victims' families will concentrate on lingering questions about the law enforcement response that they have made the focus of litigation:

Could authorities have prevented the attack in advance? Were the SWAT teams negligent in responding? Was student Daniel Rohrbough killed by a law enforcement officer as the lawsuit filed by his family alleges? Did authorities know whether it was safe to save teacher Dave Sanders, who bled to death in the three hours it took police to get to him.

Those were the key charges brought by more than a dozen families last April, in a flurry of lawsuits against the sheriff's department. Several other families later signed on to these cases as plaintiffs and named other county officials as defendants -- most notably Columbine Principal Frank DeAngelis. The sherriff's department has adamantly, and sometimes angrily, denied all counts.

But doubts have persisted. Skepticism over the investigators' vindication of the way in which law enforcement officers handled the attack lingers. And the department's steadfast refusal to release the majority of the documents, testimony and evidence collected in the investigation -- has also raised suspicions.

The department's major report was delayed at least six months, and finally released only by court order, a full 13 months after the massacre. The Columbine Report ran several hundred pages and was dominated by a detailed timeline of the attack on the afternoon of April 20, 1999. It provided only scattered witness testimony and sketchy information on most of the hotly-contested issues.

Brian Rohrbough believes the department has engaged in a full-scale cover-up, a charge that was also leveled last spring by attorneys for the Sanders family.

"There's no question about it that they're covering up," he says. "They've been doing that since day one. This report will be the best opportunity to look through some of the facts as they happened."

Observers have widely assumed that much of information on the Columbine attack will never come out until the discovery phases of the various lawsuits mandate the release. "We know we're not going to get discovery for what looks like years now," Rohrbough says. "They're hoping everyone will forget. They're hoping everyone will lose interest. That's why this report is so very important. I'm absolutely certain things are missing from the report, but I still expect it will shed some light on some things."

Rohrbough and the family of victim Kelly Fleming set the release in motion last April, when they filed suit demanding the release of nearly every category of information they could identify. The one-year statute of limitations was about to expire on filing suits against the sheriff's department, and the families were still trying to build their case.

Judge Jackson granted the families almost immediate access to the draft report, and ordered its public release by May 15. Over the following months, Jackson continued to release additional information as he reviewed it, including several hours of 911 tapes, ballistics reports, cafeteria surveillance tapes and other information. Jackson ruled on Sept. 5 that the latest material be released. Several rounds of editing were performed in the interim, to remove certain sensitive data -- such as bomb assembly instructions, names of students on the so-called "hit lists" and names of certain witnesses and suspects.

While this release dwarfed all others in sheer volume, several crucial items remain under seal -- most notably Eric Harris' infamous journal. Harris had written about the attack for more than a year, documenting apparent plans and motives in great detail. But Tuesday's documents only included requested material, and attorneys amended their request to delete information seized from the killers' homes. Rohrbough explains that the families involved in the suits were cooperating, and others asked for the deletion, partly because of the pain it would cause. He says it may be requested at a later date, but that it may be unnecessary.

Between the witness testimony, written documents and especially the so-called "Suicide Videos," we know a great deal about the killers' intentions, Rohrbough says.

What the Rohrboughs would most like to get hold of is the clothing their son died wearing, which they believe will prove unequivocally that Daniel was shot by a law enforcement officer and not Klebold or Harris. "We know what happened to Dan," Rohrbough says. "We want his clothes back because they will tell the absolute truth about what happened to him." The family has been trying to obtain the clothes since September 1999.

The sheriff's department is making copies of the newly released documents available to the press and the public for $602, plus shipping charges. Contact the Jefferson County Public Information office at (303) 271-8512, or 100 Jefferson County Parkway, Suite 5530, Golden, Colo. 80419.