Where every vote counts -- if it belongs to the right candidate. 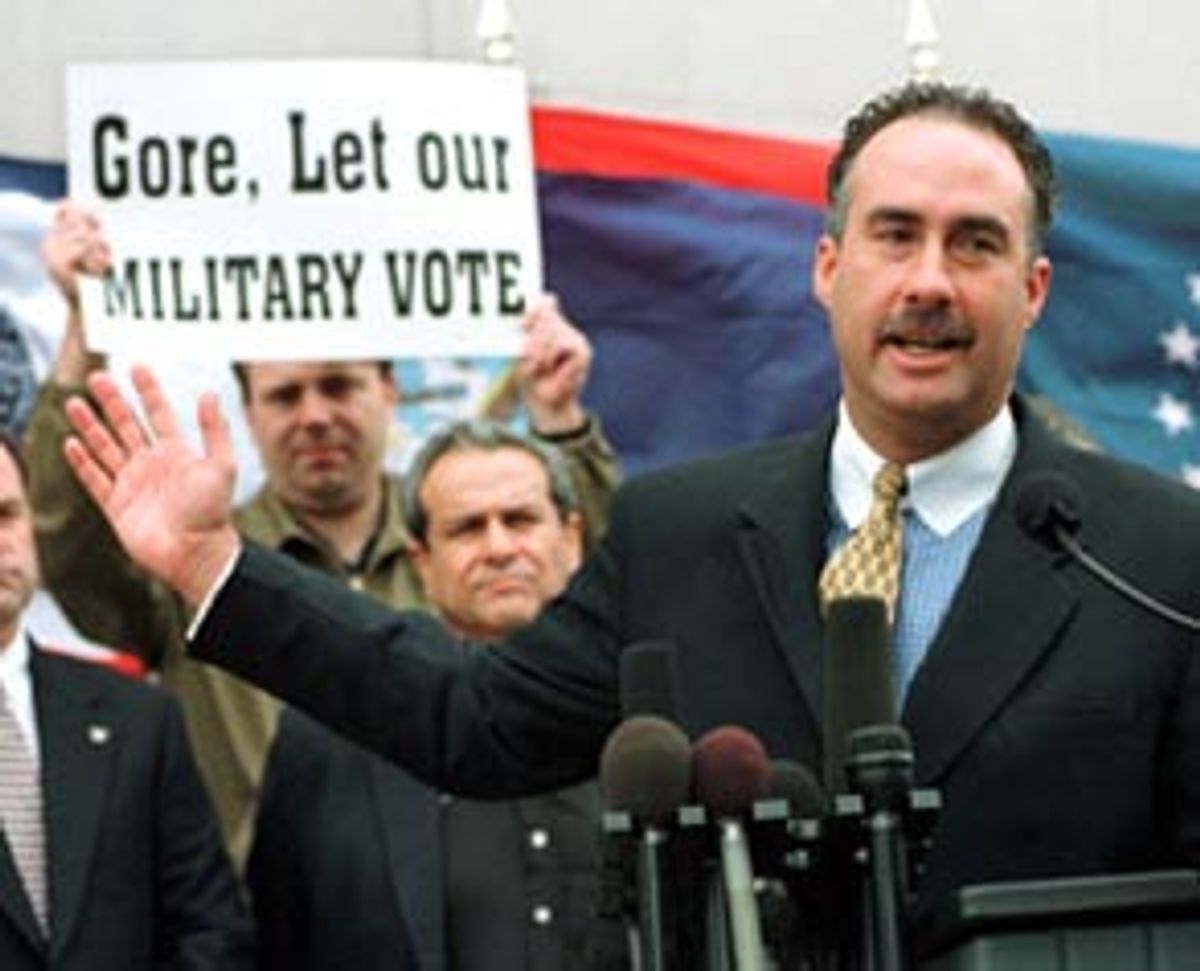 George Meros objected. Vigorously. And in his objection, and perhaps as well in his subsequent bout with laryngitis, there lies a symbol of the bipartisan nonsense playing out in Florida as the final few votes are disputed.

Meros' role in this charade came Nov. 14, shortly after 1 p.m. EST, in courtroom 3-D at the Leon County Courthouse in Tallahassee. Election supervisor Ion Sancho, a 49-year-old Democrat, had called a special meeting of the county canvassing board. Since Election Day, 12 absentee ballots had turned up, and Sancho wanted them included in the county tally before the 5 p.m. deadline Secretary of State Katherine Harris had insisted would be the final cutoff for counties to submit their vote totals.

Since Leon County had gone for Vice President Al Gore over Gov. George W. Bush 60 percent to 40 percent, Meros, a Tallahassee attorney representing Bush, clearly thought the 12 absentee ballots would favor Gore by a similar ratio. So he tried to have them scrapped.

But where Meros argued the rule of law, Sancho saw overzealousness. "He treated the proceeding as if it were a criminal proceeding," Sancho recalls. "He said that I couldn't present these ballots to the canvassing board since I hadn't personally received them at the warehouse." Sancho had in fact investigated how the ballots ended up at the polling warehouse where the ballots are taken, and he ascertained that the ballots were legit. Meros didn't buy this. He called Sancho's investigation "hearsay."

Sancho explained that seven of the ballots had been filled out by county employees who had been running the polling precincts on Election Day, and therefore didn't have time to show up to their precincts and vote. The county employee who collected these seven just happened to forget to turn them in to the county's "AB," or absentee ballot, department. There were two ballots that had been sent to Sancho's office through interdepartmental mail, which -- in the mail crush leading up to Nov. 7 -- no one had opened until after the election. Then there were three absentee ballots from voters who had recently changed addresses; the ballots were then hung up in the bureaucracy of the addressing office.

Meros did everything he could to block the admissibility of the ballots. Led by County Judge Jim Harley, the canvassing board overruled him, pointing out that Sancho had the authority to accept them. Meros was not happy.

Then they opened the ballots, right there, before Meros and the judge and about a dozen others. Ten votes for Bush; two for Gore.

Meros and the other Republicans in the room "started smiling," Sancho recalls. "When it turned out to be a net gain of eight votes for George Bush, they thanked us for our great wisdom in overriding their objection. They left and we haven't heard from them since."

Meros remembers it slightly differently. "We didn't 'thank them for their wisdom,' that's foolishness," he says. "When those votes were tallied, Judge Harley looked out and looked at me and said, 'Are there any more objections, George?' And everyone laughed. And I said, 'I'm not saying another word,' and thanked them for their time. I walked out of the room."

Meros says his objection was principled, and denies he would have behaved any differently subsequent to the vote tally if it had favored Gore. But Democrats in Leon County snipe that had the vote gone the other way, the GOP would have cried, "Mischief," and held press conferences up and down Adams Street. And clearly this is a near-sightedness that cuts across party lines.

It ain't pretty down here, in the nation's most phallic state, where Republican and Democratic operatives are doing everything they can to make sure their guy wins.

Both sides are doing it, and in the process neither is doing much to elevate this process much above your average Panama City wet T-shirt contest.

On the other side of the aisle, in Seminole County, a Democratic effort is underway to throw out all of the county's absentee ballots, which Bush won over Gore, 10,006 to 5,209.

Before Nov. 7, the Seminole supervisor of elections, Republican Sandy Goard, allowed Republican operative Michael Leach and GOP volunteer Ryan Mitchell to spend 10 days camped out in her office, filling in missing voter identification numbers on about 4,700 absentee ballot requests that would have been otherwise rejected -- ballot requests that were part of a form letter campaign by the state GOP.

Attorney Harry Jacobs -- a member of the county's Democratic Executive Board -- has taken Goard to court; Circuit Judge Debra Nelson will hear arguments Monday as to whether Goard's actions were illegal, constituting voter fraud. And while it all does seem a tad sleazy, experts say that it falls waaaay short of qualifying as a plot to disenfranchise 15,000 Floridians.

Jacob's attorney, Richard Siwica, of Orlando, says he would prefer to only strike the 4,700 absentee ballots that were sent to voters under the questionable circumstances -- but it has yet to be determined whether those 4,700 have or can be segregated from the others. After massive absentee ballot fraud during the 1998 Miami mayor's race -- a scandal in which Gore attorney Kendall Coffey got his client installed as mayor by having every single absentee ballot thrown out -- Florida passed a statute that makes it illegal to request an absentee ballot for someone unless you're a member of that person's immediate family or their legal guardian. These Republican operatives are guilty of violating this law, Siwica says, which is a third-degree felony.

But so what? I ask Siwica. I mean, didn't these voters end up voting the way they wanted to?

"People voted and we don't know that they didn't vote any way other than the way that they wanted," he allows. "But the reality is that third-degree felonies occurred, and this is the remedy that the courts have recognized. There's no requirement that this altered what the will of the people is." Local Democrats weren't given the same opportunity to correct their voters' ballot request screw-ups, he points out.

It's questionable that Siwica's request will be seriously considered. What is clear, however, is that the Gore team -- while not yet involved in the case -- is on top of the matter and monitoring it closely. Democrats are at least tacitly supporting this effort to throw out the more than 15,000 absentee ballots that went for Bush 2-to-1 because of what could be a mere technicality.

Then there's the largely Democratic Broward County's Sunday switch. Gore hasn't garnered the votes during the ongoing hand recount in the largely Democratic counties of Broward, Palm Beach and Miami-Dade. So Democrats have argued that canvassing boards should accept the broadest possible definition of which "chad" is acceptable to count, pushing to have those unpenetrated chads -- the bulging, "dimpled" and "pregnant" chad -- to be considered votes. On Sunday, Broward changed its chad rules, including the dimpled chad as a vote, making them more favorable to the Democrats.

Democrats rightly point out that such is deemed acceptable under the Texas law supported by Bush, but Republicans are also correct to slam the counties' ever-evolving interpretation of chad rules as Gore's need for more votes becomes more apparent.

Most prominent in the past few days, of course, is the ugly fight over military absentee ballots. Of the 3,733 overseas ballots received in the state since Election Day, 1,527 were rejected, according to a tally by the bean-counters at the Associated Press. This regrettable -- but by no means unusual -- fact was used effectively if perniciously by the Bush team in the latest, most vicious level of overheated rhetoric that has marked this mess.

"The vice president's lawyers have gone to war in my judgment against the men and women who serve in our Armed Forces," Bush's designated pit bull, Montana Gov. Marc Racicot said Saturday. "The man who would be their commander in chief is fighting to take away the votes from the people that he would command."

Republicans distributed a Nov. 15 memo from Democratic attorney Mark Herron, the subject line of which read: "Overseas Absentee Ballot Review and Protest." The memo included a list of reasons overseas ballots could be challenged, hardly squaring with the Gore team's rhetoric of wanting every vote to be counted. Republicans pointed out that one of the reasons for challenging an overseas military ballot listed on Herron's memo -- a ballot that lacks a postmark -- doesn't match federal law that allows military personnel to mail ballots without a postmark.

But even if the Democrats weren't wrong on the law, as seems to be the case, it would be hard to overemphasize what an apocalyptically bad P.R. move this was -- not to mention the appalling hypocrisy. Suddenly, the party arguing that every vote should be counted was engaging in a paper-trail-laden campaign of enforced disenfranchisement -- one specifically targeted at our men and women scattered around the globe. And to put such plans in a widely distributed memo!

Moreover, during the post-election hour, when rumors swirled of a pro-Gore surge of absentee ballots from Israel, the Florida Republican Party held an emergency press conference, in which former Secretary of State Jim Smith sternly admonished the very same absentee ballot rules that the Florida Democratic Party is now being flogged for circulating.

Smith told the press, "Overseas ballots must be postmarked by Nov. 7." As for military ballots, Smith said, "Only those ballots mailed with an APO, Army post office, FPO, fleet post office, or foreign postmark shall considered valid. Ballots that are not mailed with these postmarks are invalid and cannot be counted."

Those inconvenient facts seem to have been lost.

Tuesday afternoon, Sen. Bob Kerrey, D-Neb. -- who spent the Vietnam era heroically serving as a Navy SEAL and losing a leg in the process (while Bush was protecting the Dallas Cowboys from the Viet Cong) -- has attempted to rebut this successful GOP assault, to little effect.

The Bush P.R. team has held press conference after press conference, filling the airwaves with the loathsome charge that Gore will be unable to serve as commander in chief since his lawyers are using the same self-serving and nit-picking tactics as Bush's Florida legal team.

"They were saying, if it did not have a postmark then it cannot be counted," said Rep. John Sweeney, R-N.Y., in a Miami press conference on Tuesday afternoon. "I propose to you that it would be very difficult to serve as a commander in chief when you try to disenfranchise those very defenders of freedom. It's a sad day for America."