While the rest of you make pie, we are chopping and dicing familial neuroses. 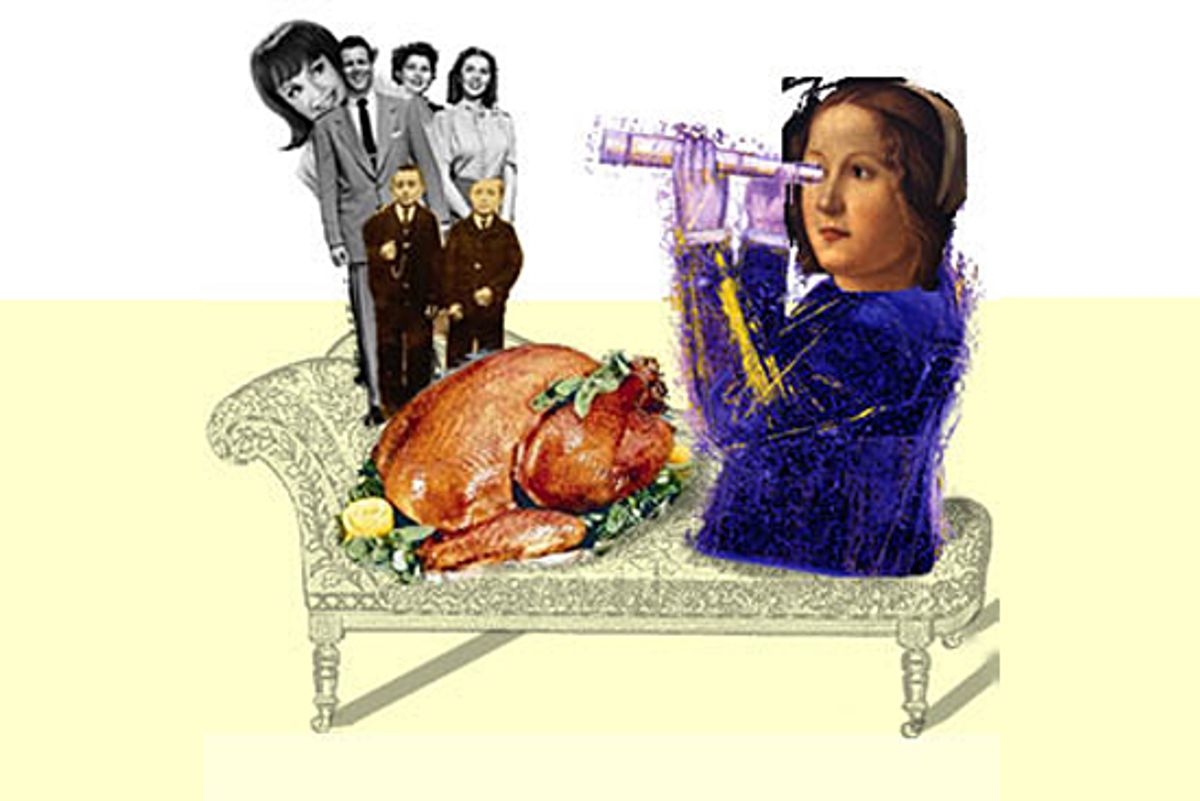 While most Americans are rolling pie crusts or picking up Aunt Joan at the airport on the day before Thanksgiving, my family is at the therapist's office. My sister Nadine is explaining how she feels when my parents invite her ex-husband to family events and remember his birthday but not hers. My mother is trying to make us understand why it is entirely reasonable that her blood pressure spikes when my father gives in to his poor posture and slumps in his chair.

Therapist Monica is recording it all on her laptop, presumably so she can refresh her memory before our next visit the following year. Occasionally she stops tapping the keys and looks quizzically at one of us. She tilts her head sideways and asks, "What's that like for you?" or offers a Kleenex.

In the decade before we started seeing Monica, my family had assembled for only one occasion -- my grandmother's memorial service. On that day, my oldest sister, Betsy, had invited the siblings, but not my parents, to her house after the ceremony. She hadn't talked to my mother, her stepmother, in years.

But even without Betsy's prickliness, discord simmered. When my parents visited the West Coast to celebrate the holidays with the rest of us, our initial jokes and hugs quickly slid toward meddling and edginess.

Before long, my mother was giving Nadine "good parenting" tips, and my brother Bill was answering questions in single syllables or with sarcasm. "Thanks, Mom. I'm a computer programmer in Seattle and it never occurred to me to apply for a job at Microsoft." I was sitting at the opposite end of the table from my father so I couldn't hear him chew, but then I was closer to my mother, who was picking at her feet.

My parents found Monica at their town library, where she was giving a lecture about her new book, "You Can Go Home Again: Reconnecting With Your Family." Inspired by her optimism, they made an appointment to discuss how they might encourage Betsy to allow my mother into her life.

Soon Monica persuaded my father that he and Betsy should have some sessions together. After several of these, Betsy started phoning my parents' house occasionally. Spurred in part by renewed yet shaky relations between my mother and Betsy, we decided to try Thanksgiving at the old family home that year. When Monica found out that the entire family was coming, she told my parents to bring everyone to see her.

She met us in the waiting room. "Hi," she said, looking at each of us in turn and shaking our hands firmly. A nubby cardigan covered her ample torso and hung at the elbows, reminding me of one of my own favorite old sweaters. "Comfort over style," I thought. "Solid, not flighty." As she climbed the stairs, strawberry-blond wisps escaped her thick ponytail and wafted up behind her. "Neat, but not fastidious."

She seemed like the aunt I hoped I was. You could lay your head in her lap and complain about your unfair curfew or that you'd talked to your parents that week so of course they should give you your allowance. But she'd tell you straight if your mother was right about not getting you the puppy until you demonstrated that you could keep your room clean, and would raise her eyebrows when you admitted that you had "just forgotten" to register for the SAT.

We traipsed into her office, which held a desk strewn with books and piles of papers. A few dolls and a heap of blocks occupied another corner. In the middle, seven empty chairs waited. The possibilities of seating arrangements quickly overwhelmed me. Surely Monica would notice how we settled. Surely it mattered for some reason that I might or might not want to suppress. Should I sit next to one of my siblings or one of my parents? Should I take the one rolling chair or one of the two squishy chairs or the upholstered one that stacked? Should I sit close to Monica or opposite her? Near the door or next to the one-way mirror?

Predictably, Nadine and Bill were already making fun of the situation. Bill's gaze bounced off the mirror and caught mine. He opened his eyes wide and then rolled them. Nadine was dashing for the rolling chair and pretending to shove Bill out of the way to get to it first. I cooperated with her joke and whined, "Hey, I called that one." My dad, oblivious to our playing, went right for one of the squishy chairs.

Monica planted herself in the remaining seat. She steered her soft eyes slowly from me to Nadine to Bill as she said, "I've been talking to your parents and sister about your family, and I thought it would be fruitful to include you in the conversation." She smiled.

Pretty soon, she got Bill explaining how he had wanted to write songs but my parents had pressured him to study mathematics and computer science because that would lay the groundwork for a "safe" career. He discussed his frustration about failed relationships and his desire to know how my father felt about anything.

Nadine related how Bill had filled her young childhood with terror: He had told her that the lawn mower mowed up small children and that the oilman would get her. She had known at 12 that she wanted to play the saxophone more than anything in the world, but my mother had made her take up clarinet instead because the sax was "not a classical instrument." She recalled how she had phoned my parents the morning she got married because at that point, she figured, it would be too late for my mother to confuse her about whose idea it was.

My mother recounted the beginning of her marriage to my father, when she suddenly had his two small children (Betsy and Bill) to care for. "Hans didn't think we should kiss in front of Betsy because it might upset her," she recalled. "And he went back to the lab as soon as he thought I could manage. But I couldn't manage, even if it looked like I was managing." Betsy's head bobbed slightly up and down.

Betsy told my mother yet again that she should back off, quit trying to engage her in chats about movies and hairdressers and let Betsy initiate contact.

We didn't even get to my eating disorders, and that was fine. I had tackled that issue on my own, and it was a relief to be the quiet one for once. I didn't jump in to play mediator, either. I didn't try to persuade Nadine that my parents forgot her birthday because they're completely unsentimental -- not because they didn't care about her. I didn't suggest to my parents that they just meet for dinner in New York if my mother wanted to visit three special museum exhibits that day while my father preferred to stroll around the lake in Central Park.

I didn't even attempt to explain to Betsy that my mother's bouts of rage were as dangerous as the temper tantrums of a 3-year-old. Instead, I kept my mouth shut, letting the verbal patter gently massage my mind. Monica could say those things if they needed saying. Monica could grease the gears of communication when they started grinding.

I leaned back, curled one of my legs under me and surveyed the room. I saw my father, a man who had escaped Nazi Germany in the nick of time and then lost his first wife in an accident in which he had been driving. I saw his wife of more than four decades, a woman who had married at 22 into a situation where she'd be raising two kids, one of whom would grow up to reject her.

I saw a 49-year-old woman who had spent her entire life since she was 2 searching for her perfect dead mother, and a 47-year-old man who felt so entrapped by the cautions of his parents that he couldn't break out and make his own life happen. I saw a tormented little sister, now 44, who was struggling to grasp the notion that she should pay attention to what she wanted instead of listening to her mother's voice, questioning every impulse. Finally, I saw me, the much younger, unintentional one -- still trying to figure out whether I held a deserved place in the world.

I also saw a chemist, several writers, a piano teacher, a songwriter and a saxophone quartet composer. I saw a hypnotherapist, a former Peace Corps volunteer and mothers who had striven to avoid making the same mistakes their parents had. I saw myself, a Ph.D. scientist with a knack for striking up intimate conversations with strangers. I may feel insecure, but when I manage to leap, I tend to fly.

I saw siblings who still horsed around with each other in their 30s and 40s, and graying parents who had enough sense and gumption to haul everyone together for a therapy session. I saw a family that was willing to keep trying, despite decades of pouting and fuming and an occasional hurled plate.

After two hours, Monica dismissed us kids to the other room while she chatted with my parents before reassembling all of us for the final stretch. Suddenly, new possibilities emerged. Nadine swung back on the recliner in that other room and declared, "I really should divorce Mark." Bill said, "I'm 47 years old but I sounded like an adolescent. I'm not caught in those situations anymore, and I shouldn't act like I am." I thought, "Maybe I can ditch 12 years of postgraduate training and switch careers to what I think I'd love."

I don't know if we like each other or ourselves better after our Thanksgiving sessions with Monica, but the conversations seem to drain decades of rancor.

During our holiday visits these days, we aren't as quick to poke at each other, or to feel needled. When my mother uses turkey-greased hands to pick up the phone, I don't always squeal, "MO-OM, that's disGUSTing." My father and brother go for at least one extended walk together. Nadine says, "Mom, I'm not asking you for your opinion. I'm just telling you that I signed up for a sound-healing class." One time my mother even asked my father to cook the steaks for Wednesday's dinner so she'd have time to organize her slide show without feeling harried.

Betsy won't go to Monica's anymore, but she calls my parents' house as soon as the annual session is over to find out what happened. Then she comes over to find out more. Last year, the six of us spent four hours talking around the dining room table after we got home.

My partner and my brother's girlfriend lay low, making pilgrim buckles out of cardboard and aluminum foil in the basement. My grown niece jumped in to support the enterprise, luring her young cousins out of the house for ice cream. For the first time, Betsy came over every day we were visiting. She even joined us Friday night to play charades -- not her favorite pastime -- and brought some word games to share.

Although we spend hours the day before Thanksgiving sifting our lives instead of flour, rehashing events instead of chopping vegetables, we manage to get the bird on the table. When my mother inadvertently sprays water as we share the sink or Bill bumps into me while hauling the turkey out of the refrigerator, I feel cozy, not crowded. And if Nadine leaves lumps in the mashed potatoes or my father talks with his mouth full, I just make a note of it. For next year.