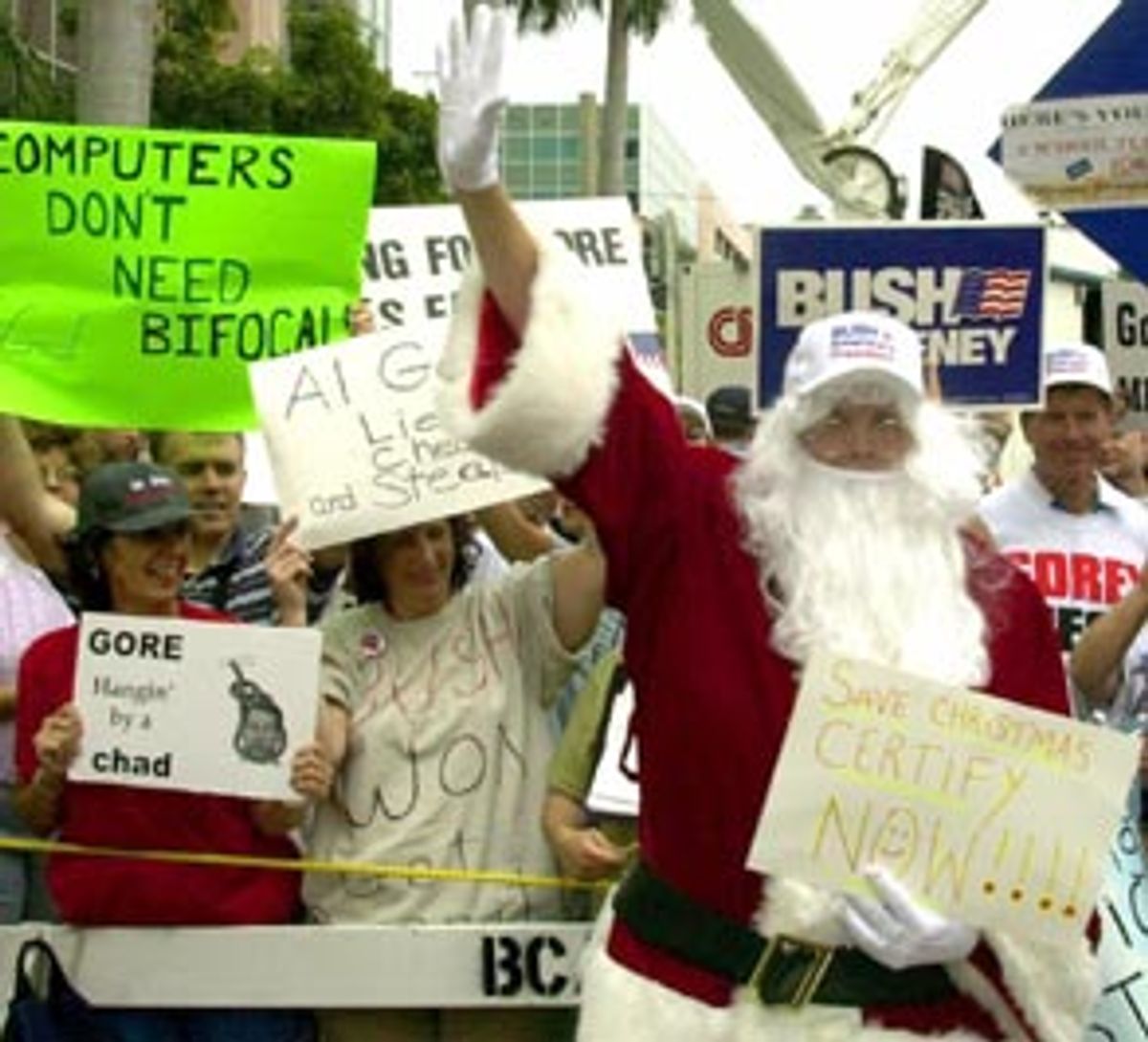 "This evening, the secretary of state of Florida has decided to certify what -- by any reasonable standard -- is an incomplete and inaccurate count of the votes cast in the state of Florida," Lieberman said.

Bush was expected to speak later Sunday night and declare himself the president-elect. Gore was scheduled to speak Monday.

The new totals do not reflect the result of Palm Beach County's manual recount, which was not finished by Sunday's 5 p.m. deadline established by the Florida Supreme Court. So Harris used results of the county's machine recount for the state's final totals. By using the machine count numbers rather than the numbers from the manual recount, Harris' decision cost Gore close to 200 votes in Palm Beach County alone.

Harris' move came just hours after she rejected Palm Beach County's plea to turn in the results of its ballot recount on Monday at 9 a.m. EST instead of Sunday evening. Canvassing Board Chairman Charles Burton said there were 800 to 1,000 ballots that would not be counted before the 5 p.m. EST reporting deadline. But the county continued counting those ballots after the deadline passes.

The county's elections board -- exhausted after a full night of squinting, squabbling and squaring manual recount results with earlier tallies -- was seeking an extension of Sunday's deadline in order to complete its recount. Burton criticized Harris for not allowing them a couple of extra hours to finish their count. "Unfortunately at this time, we have no other choice but to shut down," Burton said.

Harris rejected the appeal through her staff less than two hours before the Sunday deadline.

In preparing for the next phase of legal battles, Al Gore's lead attorney David Boies outlined the Gore campaign's plans for contesting Florida's election results, which are scheduled to be certified by Harris on Sunday evening.

Boies pointed to three major complaints the Gore campaign has with the way votes have been counted in Florida for their suit they plan to file Monday morning.

The first issue is the approximately 10,000 so-called "undervotes" in Miami-Dade County. Those ballots were not registered by the first two machine counts in Miami-Dade, and Boies argued the county's refusal to conduct a recount is disenfranchising those voters. "We're asking the court to be sure that those votes are at least counted once," he said.

Boies also zeroed in on Nassau County, which convened a last-minute meeting to throw out the results of the machine recount, where Gore picked up votes, and went back to the tallies from the initial vote count. Boies called Nassau's maneuvering "without precedent."

Broward County, meanwhile, finished its manual recount just before midnight on Saturday. According to the Associated Press, Gore picked up a net gain of 567 votes in Broward, unofficially cutting Bush's lead by more than half -- although Bush gains during recounts of military ballots in some counties were expected to offset some of that.

The Palm Beach County board lost an hour of valuable work time Sunday between 4 a.m. and 5 a.m. EST during wrangling with Republican observers over the order in which precinct results were being chosen for recounting. By the time the board made its request to Harris, according to MSNBC, it still had about 2,000 disputed ballots still to assess.

The Florida Supreme Court last week mandated the Sunday deadline, but also ruled that counties could turn in their tallies Monday morning if the secretary of state's office was not open Sunday. Harris' office previously indicated its intention to certify the results shortly after all the counties have reported in on Sunday.

Even if Harris had granted Palm Beach's request, it clearly would not have dissuaded the Gore team from its declared intention to contest the county's official results. Gore supporters have been distressed by the minimal number of votes he has gained in reported recount results to date from Palm Beach. They maintain that the Palm Beach elections board, although comprising three Democrats, has used excessively stringent standards in judging whether the infamous dimpled ballots can be counted as votes for one candidate or the other.

The board has not included ballots with dimpled chads for the presidential vote if other races had chads that were punched through. In contrast, Broward County used a more liberal standard than in Palm Beach County -- which clearly helped increase Gore's net gain. Predictably, Republican observers have objected fiercely to the Broward County standards, decrying them as so broad that they allow the canvassing board to interpret non-votes as votes for Gore.

Gore also intends to contest the results in Miami-Dade County, which halted its recount effort after determining that it could not possibly finish by the Sunday deadline.

The heated rhetoric and street protests over which votes should be recounted, and how they should be counted, continued unabated over the holiday weekend. The Sunday deadline was not the only date looming; on Friday, the U.S. Supreme Court will hear oral arguments on whether or not the manual recounts should even be included in the final election results.

Broward County was the scene of Saturday's most contentious activities. Not coincidentally, that's also where Gore made his greatest gains. The Texan still led Saturday in the official tally by 930 votes, but with figures coming in from the recounts in Broward, Palm Beach (where Bush has a net gain of seven votes) and other counties (where Bush has gained 90 votes in corrected vote totals) he leads Gore unofficially by 530.

In midafternoon on Saturday, MSNBC reported that a mysterious "500 absentee ballots" previously not counted had suddenly been discovered in Broward. That rumor proved false -- the ballots had already been counted -- but it caused a mini-furor anyway. One Republican observer -- the same one who caused a minor fracas Thursday when he contested a ballot counted for Gore by chanting "No reasonable certainty, no reasonable certainty" -- claimed in front of a televised audience that the Democrat-run canvassing board was trying to "stifle" his objections. "The nation is watching," he then warned, "and the nation will judge."

He was promptly asked to leave. Outside, in front of the courthouse, a crowd of about 300 Bush supporters held aloft the "Sore/Loserman" signs that are now ubiquitous whenever any TV correspondent anywhere is on-camera eliciting a statement or reaction from "Bush supporters."

Republican objections in Broward revolve around how the canvassing board interpreted "undercounted" ballots -- those in which "dimples" or an indentation are being counted as votes for the candidates, which in this predominantly Democratic County gives Gore an advantage.

The Bush campaign, meanwhile, filed new lawsuits on Saturday afternoon in several Florida counties to force local election officials to review previously rejected overseas absentee ballots. The Republicans have heatedly accused Gore supporters of aggressively seeking to disenfranchise military voters by tossing out their absentee ballots on excessively technical grounds, such as lack of a postmark or similar flaws.

The Republicans had previously sued in circuit court to force more than a dozen counties to reconsider the overseas ballots. They dropped that lawsuit in favor of the county-by-county approach after the trial judge indicated on Friday that he was not likely to grant their request.

"Without any proof that any of these canvassing boards have not complied with the law, this court is very hard-pressed to grant any relief," declared Circuit Judge L. Ralph Smith Jr. In dropping the larger suit, the Bush camp said many counties had started complying with the request voluntarily.

Both candidates and their running mates stayed out of the spotlight Saturday, leaving an increasing number of surrogates and spokespeople to make their respective cases --and to smear the rival camp. These stand-ins included:

Much of the day was also spent in continual spin over Friday's big -- and, to many, surprising -- announcement from the U.S. Supreme Court. The high court justices stepped into the legal battle over the Florida presidential election by agreeing to hear a Bush campaign appeal of a Florida Supreme Court decision allowing hand recounts to proceed in heavily Democratic counties.

The court issued a writ of certiorari to consider the Florida high court's ruling that the hand recounts should be included in the final tallies and has scheduled a 90-minute hearing for Dec. 1. The justices ordered lawyers from both the Bush and Gore camps to file briefs by Tuesday and responses by Thursday. Bush supporters argue that the Florida justices have usurped the legislature's role and have essentially changed -- rather than simply interpreted -- state law.

The Florida House of Representatives is also expected to weigh in on the case. In a Friday afternoon appearance, House Speaker Tom Feeney said legislators in the Republican-led body, which is generally aligned with the Texas governor, are seeking to participate in the Supreme Court case.

"In our view, the action of the Supreme Court of Florida changed the rules and standards established by the legislature prior to the election," Feeney said, referring to the court's order that hand counts can continue through Sunday. The House has retained Harvard law professor and constitutional law expert Einer Elhauge to advise it on federal law pertaining to presidential elections.