It's easier to talk to anonymous strangers about your sex dreams than about your future dreams. 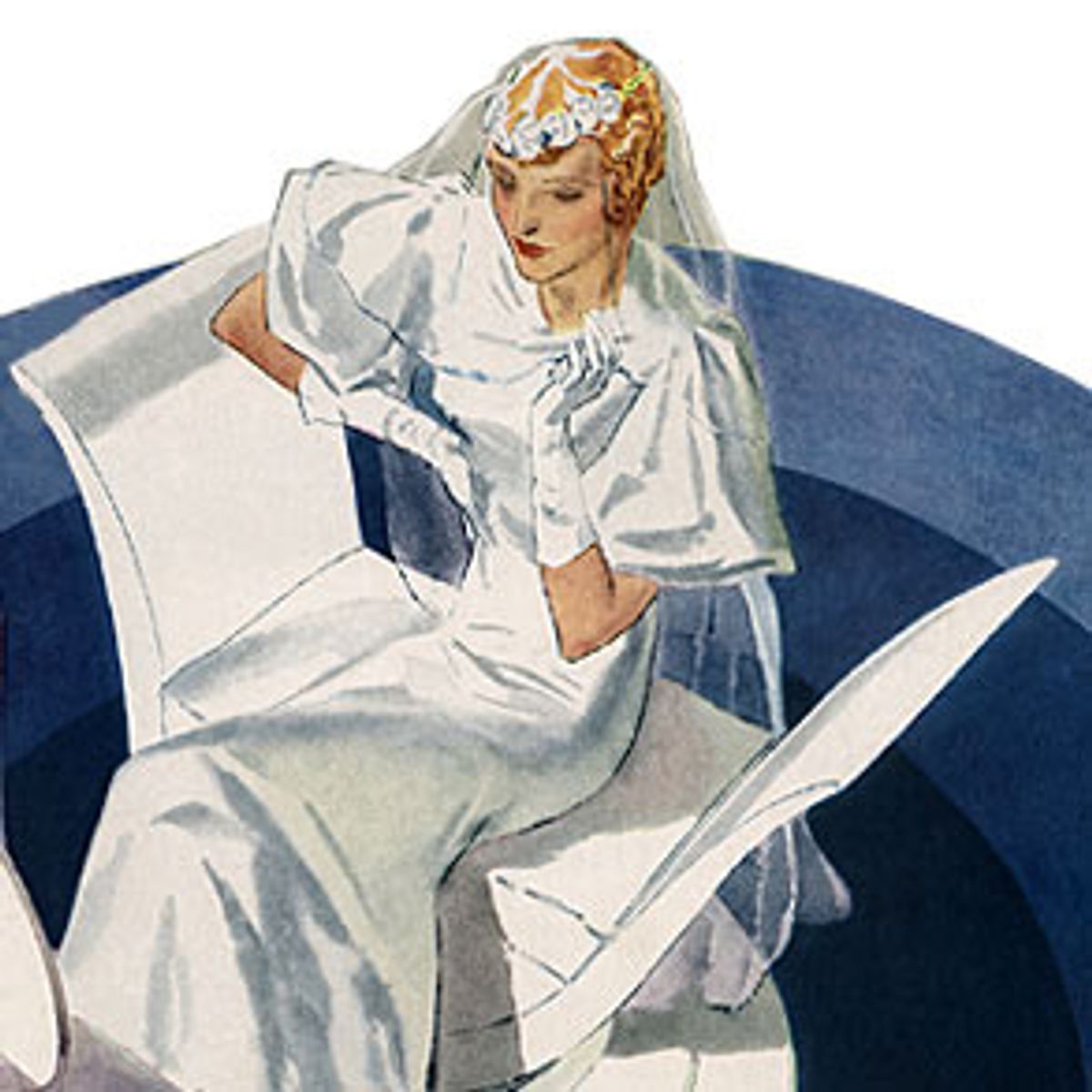 I first encountered these magazines 10 years ago at my friend Rachel's house. She got engaged right after college, and I remember feeling shocked and a little embarrassed to see that she subscribed to Modern Bride. She had even earmarked certain pages that featured puffy white gowns and romantic floral arrangements. It was like seeing a Penthouse subscription on the coffee table with the owner's favorite spreads dog-eared: an open revelation of intense fantasizing.

When I got engaged at 31, I realized that I had spent my entire adult life repressing similar reveries. Somehow, despite a hippie childhood, divorced parents, feminist politics and a preference for black above all other colors, I had developed a wealth of bridal dreams. I had just never acknowledged them before, denying my arousal at the sight of a glittering diamond ring or a bouquet of tightly bound miniature roses.

I'm not the kind of woman who gets aroused by that stuff, I told myself. I don't want to be adored by my man for my poignant beauty, to press up against him as we dance in celebration of our union, to slice a sumptuous cake so tall it can serve hundreds, to make myself dizzy on champagne and then tumble into a lush hotel room, drop the crisp white folds of my gown on the floor and then ...

Well, of course I was aroused. I just didn't want to admit it. Bridal fantasies had always symbolized conventionality to me. They were manufactured by an industry dominated by purveyors of diamonds and $6,000 dresses. I would be a sucker to buy into those prefabricated romantic dreams, dreams that set up an antiquated ideal bound to be crushed by the pedestrian nature of everyday life. And since there was no one I wanted to marry, anyway, indulging the fantasies seemed stupid and self-defeating. I would only start to want what I couldn't have.

Later, when there was indeed someone I wanted to marry, I repressed my thoughts for a different reason. In today's society, I think, it's easier to share our anonymous sexual fantasies -- involving, say, a stranger in an airport lounge, or a team of lacrosse players undressing in a locker room -- than fantasies that suggest a future. Purely physical turn-ons, in our liberated yet commitment-phobic dating world, indicate a person is erotic and open. Bridal dreams, on the other hand, are shameful because they're about sex and love together. They may be incredibly hot -- doing it on the crumpled tatters of a white wedding gown below a gilded mirror, say, or sneaking a quick one in the coatroom at the Pierre while relatives dance a distinguished waltz -- but fantasizing about devotion (or indeed, any kind of emotional connection whatsoever) is tantamount to getting hot over a house in suburbia and 2.4 children -- simply not cool if you're a career woman, a feminist or just a New Yorker.

Turns out my assumptions were wrong. We are having a wedding. My intended, my lover, my fiancé -- he wants one. And for the first time in my life, I am allowing myself to want one too.

Still, I bought the bridal magazines with a measure of shame. They were the first I had even allowed myself to look at since Rachel's wedding 10 years ago. I pressed them secretively against my chest when I met a colleague outside the newsstand. I read them in bed and hid them when Daniel came home.

But as I browsed through the long-forbidden glossies, I began to see that bridal fantasies are not equivalent to a dream of suburban domestic life. The pages of the magazines barely mentioned the possibility of children, buying houses, apportioning chores or growing old together. They were focused on the sensual apparatus of a single event: thick paper cards with curly calligraphy; slices of cake oozing liquor-filled frosting; lush Vera Wang dresses and explosions of roses. Their goal was a "zipless fuck" of a wedding, in which every moment is smoothly orchestrated for pleasure.

Weddings also used to be about the end of virginity, the veil and the white dress symbolizing the last moments of sexual innocence. Cascades of blooming flowers suggested a bride was ripe for defloration, a trousseau of fine undergarments accompanied her on her honeymoon and she returned from the trip a sexual being.

I did eventually show my magazines to my fiancé. He chuckled a bit, shared a few wedding fantasies of his own, seduced me and encouraged me to have whatever turned me on. He looked at photographs of clustered flowers and mountainous cakes; we scouted hotel rooms for atmosphere (though we never found a heart-shaped bed); he presented a ring to me on bended knee. The bridal dreams are out of the closet now. I can carry my magazines on the street with pride.

I believe that being a feminist should mean that I'm not ashamed of my desires, but I had long felt more shame about my bridal fantasies than about any other part of my sex life. Coming to terms with tradition, and finding a way to embrace the parts of it that feel good to me, is a step toward self-definition, even if it means doing things that seem rooted in an outdated set of values and conventions. Having a wedding, I'm not only giving myself a chance to make my sensual and sexual fantasies a reality -- I'm renegotiating my idea of a liberated woman. And I expect it will feel pretty damn good -- out of the bedroom, as well as in.

Of course, the reality will not match the fantasies, exactly. I will never own a $6,000 gown and Daniel hates liquor-filled cakes. But there will be black feathers on my dress, a diamond on my finger, and deep red roses in my hair. We'll eat pad thai, gingerbread and a tiered white cake. We'll get dizzy on champagne. Maybe we'll even sneak into the coatroom.