What may be the world's first drive-through strip club is bringing convenience to the flesh consumer. 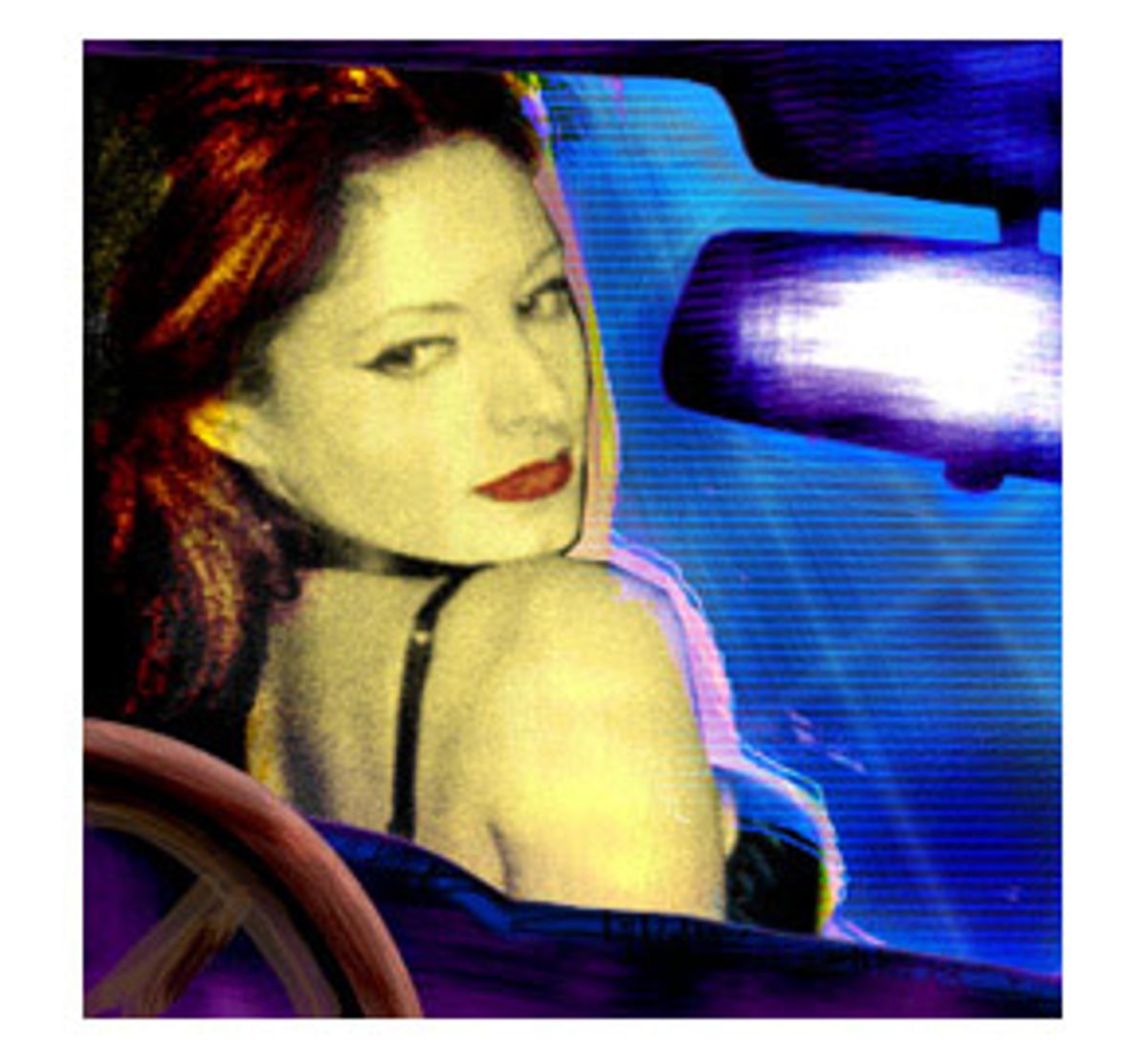 Her white lace nightgown is down and her panties are off before I can even remember to put the car in park.

Maybe she's called Bunny -- she has a pale spot in the shape of the Playboy logo just above her tan line -- but I'll never know her name unless she holds up a sign. She's dancing behind glass so thick she couldn't hear me if I shouted.

This strip joint with a drive-through lane -- billed as the only one in the world -- is a frontier experiment in arousal stuck in a Pennsylvania backwater. The Climax Red Top -- one of the three low, blocky buildings that form the Climax Gentleman's Club just 30 miles east of Pittsburgh -- sits next to a defunct taxidermist/Baptist church combo. But it's one of the best expressions of American consumerism ever conceived. If Wal-Mart were to enter the skin trade in the year 2100 or so this would be what it looked like.

Ralph the burly bouncer is behind glass too, at a bank teller's window with a sliding drawer. He shoots an index finger at the sign taped to the Lexan pane: $5 a minute, it says. No filming. If your car stalls in front of the viewing window, it's still $5 a minute.

I've only got a $10 and a $20. I put them in the drawer and shout "Five minutes," but Ralph is unmoved. He shoots another finger up the gravel driveway at a small wooden awning and disappears.

Six minutes, then. So the system isn't perfect yet.

I pull farther up and stop beside a diamond-shaped window with a dark olive curtain. It is hastily drawn aside.

I can feel the heat in my face as Bunny appears and is quickly naked. (In Pennsylvania strippers can be nude only in places that don't serve alcohol.) I'm not a habitué of drive-throughs or strip joints, but I can tell Bunny has McDonald's beat for efficiency and the "classy" strip clubs in the city topped for cost-effectiveness.

She is a long-haired brunet with pink lipstick and outrageously high silver platforms -- fuck-anybody shoes. Her figure is a bit of bravura. Sitting several feet below Bunny's stage in my Taurus, I can see slight pink scars under each breast. I also notice her wedding band. I try to imagine her life and her decisions: I shall have surgery; I shall get married; I shall dance naked for strangers. I wonder what order they came in, but not for long.

She licks a finger and touches herself when she sees my eyes stray toward the right spot. She presses her breasts to the glass, then turns around to bend over against it. She has just a few moves -- fewer even than the women who, until recently, wiggled behind David Letterman every night. But what the hell is she moving to?

In the silence of my car, Bunny's sole soundtrack is the rush of the trucks on the highway. The only thing odder than the glass that separates us is this silence.

I turn up the radio. Unfortunately, my six minutes straddle 4 p.m. on a weekday, and I've got the radio tuned to an NPR station. Robert Siegel -- or is it Noah Adams? -- is suddenly announcing that a Palestinian mob has been tossing Israeli soldiers out of windows. A definite mood breaker. I punch in the tape sticking out of the player. A very young Paul Simon -- or is Art Garfunkel? -- begins a lamentation about Bleecker Street.

There is nothing to do but stare at Bunny in silence.

Alone in my vehicle, I have often stared at strangers this shamelessly. Here in my car, with this stranger behind her own thick glass, I find I can stare at her too. The see-through wall takes away all of the embarrassment. She is just as untouchable as the strippers inside the club, but she is also literally unreachable. It's the perfect distance for privacy.

Before long she is staring at me too, just as shamelessly. Her face had been a refuge, a visual break in the action, but now she is no longer even smiling. She has gone from sultry to desultory in seconds. Now I have nowhere neutral to look.

I've only been to a strip club once before; it was someone else's idea. I'd always imagined being wildly aroused by the sight of so much comely flesh, but once I got there I figured I must be dead. I sat, stage-side, as woman after woman came out, some barely dancing, others playing naked Twister. I examined my inner Clinton for interest. Nothing. Instead I began wondering where the snacks were. I put a napkin on my lap; it stayed there. And then I realized: The whole thing was just too public to be sexy.

In fact, everyone was laughing. The women were giggling at one another and at the announcer's feeble attempt to whip up applause. The men were even laughing during private table dances.

When the table next door got its own show, the face of one dancer hovered inches in front of mine.

"Hi," I replied, grinning painfully back.

We might as well have bumped into each other on a city bus.

Now at the drive-through, I realize it is Bunny's smile, as much as her naked body, that made me blush at first sight. The smile is the sexiest and most private part -- the secret to this whole drive-through operation -- because it's personal. When she stopped smiling the private moment went away.

Inside the Climax, owner Nick Fratangelo -- suited and soft-spoken -- reluctantly takes me up onstage to see the show from the dancers' perspective. Bunny is already busy entertaining a client nearby. At the apex of the diamond window, just out of sight of the idling cars, is a pager that signals when each stint is up. From the stage, the gravel driveway, the wooden canopy and, I imagine, the men in cars must seem as distant as a street seen from the tallest building.

I figure Fratangelo will plug his drive-through idea as revolutionary, but he couldn't be more blasé. He says he hit on the notion at a company meeting. "This came out of one of the brainstorming sessions on new business," he explains -- the first time in history that Robert's Rules of Order helped bring customer service to the soft-porn industry. "We have one more feature to offer the public as they're driving by," he adds.

Fine. But driving by in a 2-foot-high Taurus was apparently my first mistake. "If you're in an SUV or a truck you're about perfect," says a bouncer colleague of Ralph's who doesn't want to give even his first name. Call him Larry. Larry and Ralph greet more of the drive-through clients than do any of the strippers, of course. Larry says he has seen as many as 12 in a limousine come through at once. So it's $5 a minute per carload, I discover. Driving through alone was yet another rookie mistake.

Cookie, a 35-year-old Climax dancer, performs half a dozen drive-through shows each shift -- just a small portion of the hundreds of shows club workers claim are requested during Climax's 12-hour days. She sits knock-kneed beside the club's W-shaped main stage in an all-black version of Bunny's costume. She's a thesis shy of a master's degree in sociology -- "with a specialty in deviance," she adds, enjoying the irony -- but works here for the usual reasons: kids and money.

"More come to the window than come in," Cookie says of her customers now. "We see business guys, especially in the afternoon. Lots of salesmen."

"Some of them are smiling, laughing, giggling and pointing, gesturing for you to do things," she says. Some even hold up signs with instructions. "Sometimes there's women in the car," Cookie adds, miming open hands shielding eyes, faces turning away.

Of course, there are drawbacks. Cookie calls the $2 a minute she clears from drive-throughs "a good deal," but any tips would just bounce off the glass. Larry says the club is thinking of putting a sliding drawer in the dancers' window, too.

But it's already tough giving carbound patrons their money's worth. "If it's over four minutes," Cookie says, "it's too long. You just run out of things to do."

Maybe a single minute would have been enough for me. I am an American consumer, after all. And here was naked flesh as only Americans can produce it: safe, well-lit, clean and utterly expedient. Not only was it anonymous, it was deaf and dumb. The perfect deal.

As I'm leaving the club, Cookie already has her knees wrapped around the ears of an older man seated at the edge of a table. I'd seen her greet him, offer her name and laugh at something he said -- even bend down to shake his hand. I could see between her legs now as I passed, but I didn't want to. I mean, I wanted to, but somehow it seemed too -- impersonal. Time to get back to my car.

Marty Levine is a writer in Pittsburgh.