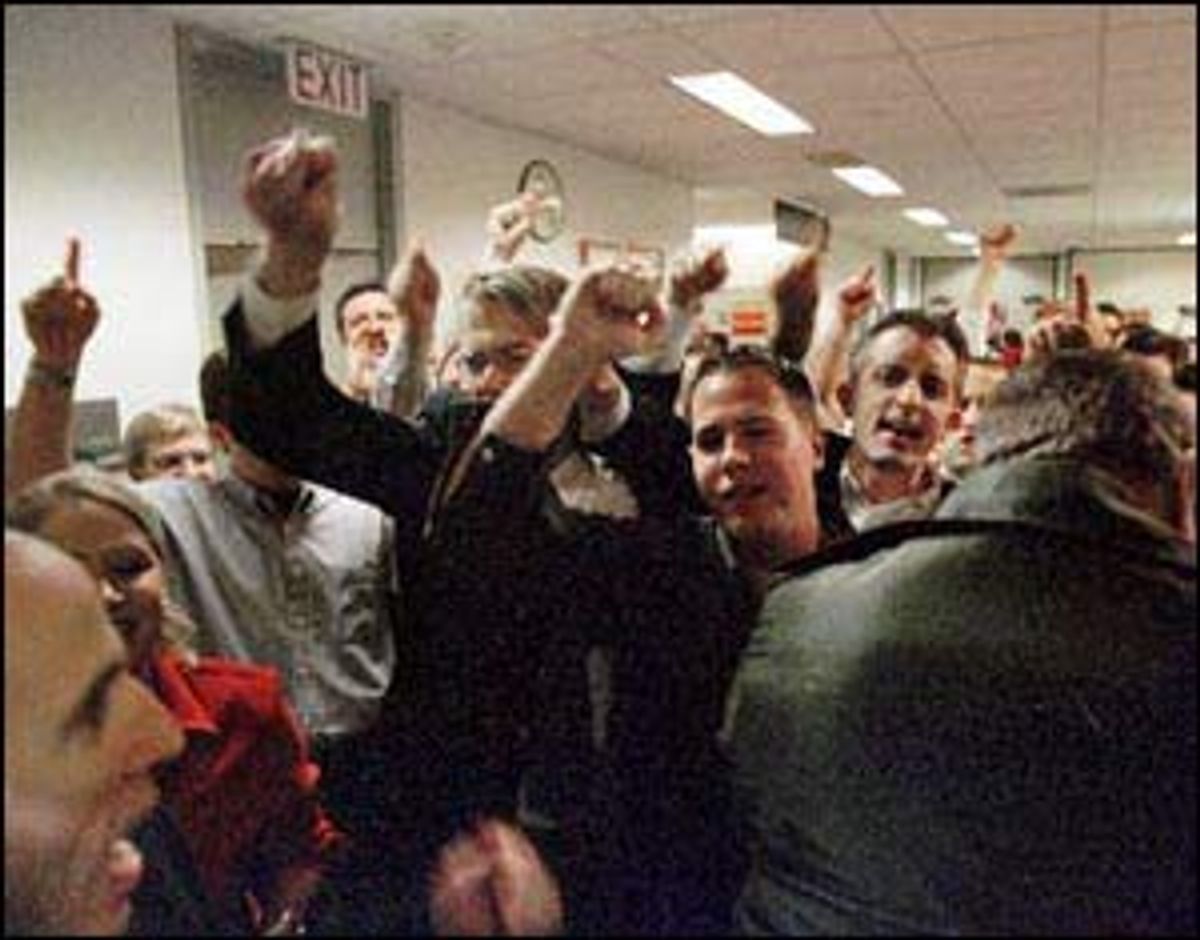 On the surface, it looked like the good people of Miami at their worst again. Last week's melee at the county offices here -- followed by the local canvassing board's abrupt cancellation of a hand recount -- had all the trademarks of Miami's notorious tantrum politics. Screaming, shoving, fist-waving, intimidation, ties to Elian Gonzalez and even hints of good ol' Cuban-American political corruption.

But the fact is that the fracas at Miami's recount headquarters was engineered and carried out by Republican Party operatives imported from the heartland, far from South Florida. They might have reminded viewers of Elian's Army -- and might even have taken lessons from the Cubans -- but, by all accounts, the city's strident conservative exile community was very much in the minority. As one observer put it: "There were no guayaberas. This crowd looked tweedy. They were from out of town."

Indeed, all on-the-scene reports coming out now indicate that the Miami protest was carried out by rent-a-rioters flown in by the Republican Party. GOP spokespeople have said that at least 750 Republican activists have been sent into South Florida from around the country to oppose the recount, with the party picking up the tab for a number of them. And last Wednesday, when a gaggle of protesters sprang into action in Miami, those efforts seem to have paid off.

The halt of the Miami-Dade County hand count, where 10,750 ballots remain uncounted -- more than enough to flip the outcome of the Florida election or further buttress George W. Bush's lead in the state -- dealt a devastating blow to Al Gore's presidential campaign. The vice president's attorneys are arguing that intimidation influenced the canvassing board's decision to stop the hand recount and that it should be resumed.

The incident -- the ugliest single set piece of the Election 2000 epic and possibly the most decisive one -- was set in motion by one imported GOP operative: Rep. John Sweeney, R-N.Y., who from an office in that same county building has led the Miami fight against the recount.

But Sweeney wasn't alone. According to the Miami Herald, he had a few helpers, including Elizabeth Ross, a staffer for Senate Majority Leader Trent Lott, R-Miss., and Thomas Pyle, an aide to House Majority Whip Tom DeLay, R-Texas.

London Sunday Times correspondent Tom Rhodes, who was present during the protest, says he overheard one GOP protester on a cellphone in the midst of that political mosh pit bragging that he had tipped off Bush campaign strategist Karl Rove about the rally. "I just told Rove," Rhodes overheard. As with the presence of Ross and Pyle, the call demonstrated that these weren't just protesters lured off the streets by the party, but connected, dyed-in-the-wool party operatives.

Wednesday's upheaval came suddenly and unexpectedly. With the Sunday deadline mandated by the Florida State Supreme Court fast approaching, the three-person canvassing board decided to scrap a total recount and tally only contested ballots. The board also announced it would move its operation to a smaller room closer to the computerized ballot-scanning machines in order to speed up the count. Despite the fact that observers and pool media could still be admitted, the GOP's Miami team, which had been decrying possible corruption in the count all along as Gore picked up another 157 votes, decided it was time to act.

On hearing of the decision to move the vote tally, Sweeney uttered a three-word order to his troops: "Shut it down." Those words were reported by Paul Gigot, who was in the room with GOP operatives, in his Wall Street Journal column Friday.

Within minutes, some two dozen GOP recount observers and other Bush supporters had begun pounding on the doors and windows of the county elections tallying room on the 19th floor of the building. They demanded to be admitted and chanted, "Stop the count. Stop the fraud." Television cameras showed the protesters trying to force their way into the room.

According to Gigot, who was with Republican leaders at the protest, the GOP forces also threatened to unleash the vociferous Cuban-American community on the recount workers. "One thousand local Cuban Republicans were on the way," they said. But they never seemed to materialize.

"There were two or three loud Cubans but most of the people I talked to were white, mostly men, from Oklahoma, Texas, mostly Southern states," says Sunday Times correspondent Rhodes. "They were talking on cellphones, probably to people nearby, telling them to get in there right away and bring as many people as they could."

One of the main targets of the demonstrators was Democratic County Chairman Joe Geller. Geller, who had gone to the elections office to request an unused sample ballot, was mobbed by the protesters as he left those offices. They accused him of stealing a ballot.

"I requested it, which I'm entitled to do," says Geller. "It was clearly marked 'sample ballot for use by Democratic Party.' The whole transaction was out in the open and all very calmly done. This Republican observer -- a woman with blond hair, a suit and clipboard -- was watching the whole thing. But the moment I started to walk away, she sicced the crowd on me. She said I was stealing a ballot and they surrounded me. It was all orchestrated," he alleges.

Television cameras captured those frantic scenes and broadcast them to a riveted global audience.

"Suddenly, I was surrounded by a screaming, shoving, insane crowd, shouting that I had done something I hadn't done," Geller says. "People grabbing at me and my clothes and there was almost no security. I couldn't believe those people weren't arrested."

Geller was unhurt, but he raised the question of the lack of security in County Hall and criticized Democratic Cuban-American Mayor Alex Penelas, who basically broke with the party after the Elian affair and did not campaign for Gore in the city. In fact, some two weeks before the election, he led a trade delegation from the county to Spain, and did not return until just before the balloting took place. Penelas has said publicly that he chose to "stay above the fray." A spokesman for the mayor said Monday that he had done everything possible to facilitate the recount.

But rumors abound in Miami that Penelas may soon switch parties.

Geller, who himself wants to gain support for his party in the exile community, mentions more than once that there were few Cubans in the rowdy crowd.

"This was not a Miami moment. It was outsiders, Hitler youth, sent in by the Republicans to intimidate the election officials," he says.

Only a few hours after the protest, the board members did exactly what that mob was asking: They halted the count. The move left the indelible impression on many in Miami, especially Democrats, that they had caved to the protesters.

But members of the commission deny such charged allegations. David Leahy, the county's supervisor of elections and a member of the canvassing board, denies that the protest had any effect on the decision to end the recount.

"At no moment was I intimidated," he said earlier this week in a televised interview. The denial came after the New York Times story reported that the protests had been a factor in the board's decision to end the recount.

The board has maintained that the state Supreme Court deadline, not GOP pressure, drove the canvassing board's decision to abandon the count. But the Democratic Party says the protests did cause the halt, and the Gore team has made the alleged intimidation a major prong in its legal strategy.

The board is composed of Leahy and two county judges, Lawrence King and Myriam Lehr. King is a registered Democrat and the other two are independents. They are all appointees.

King and Lehr are both clients of controversial political consultant Armando Gutierrez, who was spokesman for Lazaro and Marisleysis Gonzalez during the Elian telenovela earlier this year. Successful candidates for Miami-Dade County and circuit court judgeships routinely turn to Gutierrez for help. In exchange for his $15,000 consulting fee, Gutierrez assures the support of the Cuban community, which means the judges will almost certainly run unopposed. According to the Miami Herald, as of mid-October Gutierrez had collected $351,750 in consulting fees for representing those judges in this election cycle alone, including King and Lehr.

Tony Alfieri, a professor of law at the University of Miami and a commentator on legal ethics, said Monday there were no allegations of corruption against the judges, but he decried the way in which they had been pulled into the political process and how that created "the appearance of corruption. And that appearance affects not only this election result, but public participation in the process."

In a telephone interview, Gutierrez says he was in Toronto the day of the protest and didn't play a role in it. "Those judges don't run again for six years," he said. "I won't see them until then."

For many, the melee at County Hall was a vivid reminder of the rhubarbs outside the Miami home of Elian last spring. As with almost everything in Miami these days, it's not hard to find symbolic connections between the election recount, Elian and also to the political climate of the 1990s, which was rife with corruption.

John Lantigua is a Miami freelance writer. He shared the 1999 Pulitzer Prize for investigative reporting for his work at the Miami Herald. Lantigua's fifth novel, "The Ultimate Havana" will be published next year by Signet.