Should I go for the needle and herb barbecue? 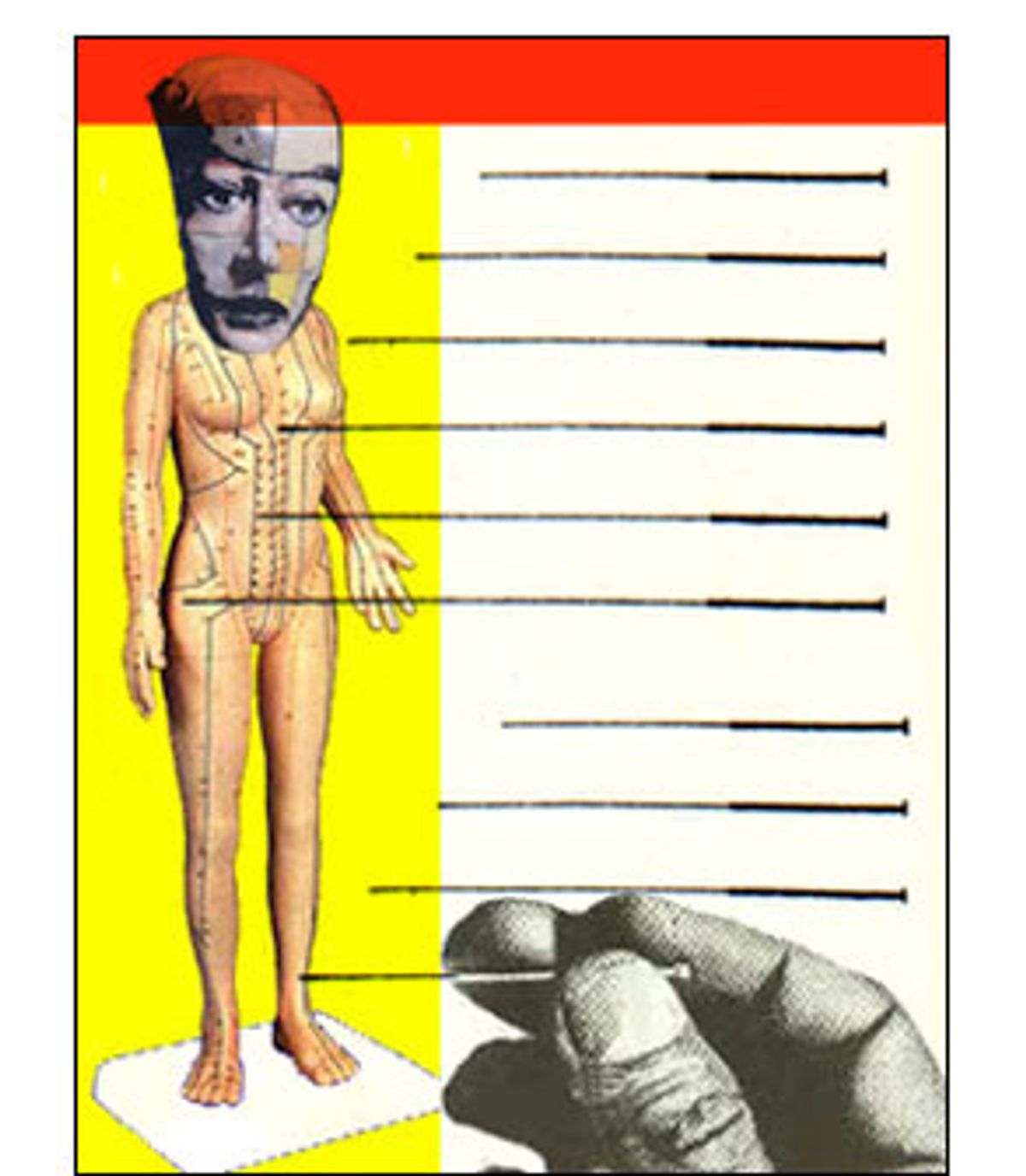 Lately, I've witnessed my friends fall, one by one, into the clutches of acupuncturists, solemnly subjecting themselves to strange needles, dietary requirements and stinky herbs. Just a few weeks ago at our favorite restaurant, I watched in horror as my friend Eileen, once a sensible sort of person, sent back a chilled glass of water and ordered one at room temperature. "I have to -- my acupuncturist insists on it," she said, forcing the poor waiter to forage in the basement for a bottle of unchilled Evian. And then I lost Linda, with whom I'd always felt free to share my innermost feelings about Hostess cupcakes. She was last seen popping an herbal tonic called Free and Easy Wanderer, swearing off sugar for good this time, and undergoing acupuncture twice weekly.

Would I ever become a human pincushion? I didn't think so. I would only submit to medical procedures requiring a needle if death threatened. OK, give me a tetanus shot, but only if the nail I stepped on really had rust on it. Even then, I couldn't wait for the day when Western medicine caught up with Dr. McCoy on "Star Trek" and his high-compression air pump that delivered shots without pain.

Then I met Adrienne at a weekend seminar for infertile couples considering adoption. When she slumped into the room that first day, I thought, this girl needs one of those wire prop-up stands, like the one Barbie used to come with. Pale and tired, Adrienne could barely speak without crying. We had both been trying to conceive for several years and now we were both in our early 40s. We'd done so many ovulation test kits we should have bought stock in the company that made them. We'd also tried in vitro a few times each, but nothing seemed to work.

Four months later I met Adrienne for coffee. Like a dying plant that had finally gotten water, Adrienne was a new person. Her skin glowed, and her eyes gleamed with hope. She actually smiled. "Acupuncture," she whispered, when I asked her what had happened.

Oh no, not again. I tried to block out her words as she went on to extol the virtues of this treatment. Then came the clincher: One month after our coffee date, I called Adrienne and found out she was pregnant, after what was to be her final in vitro. And I, who'd been contemplating calling the Psychic Connection, found myself asking her, "Who's your acupuncturist?"

My day of reckoning finally came. As I climbed the 30 steep steps leading to the acupuncturist's office above a Radio Shack in San Francisco, I realized their real function -- if I hadn't felt the need for acupuncture before, I would when I reached the top. Inside the crowded front office I was greeted by an 8-foot-tall plastic man who was painted gold and wore a red scarf around his genitals. He had about 600 holes in him, but he was still smiling -- a good sign. The receptionist introduced me to Sparky, the clinic's gigantic tan bulldog, who watched me with one eye as I filled out the 10-page medical history form.

This was not the standard form I had breezed through without a second glance whenever I'd had to find a new doctor. It took me through each body part, each organ and each body system inch by inch. "Do you have ringing ears? Do your hands feel cold? Do your feet sweat? Do you have dizziness?" Most ominous of all was the question "Do you bruise easily?" What were they going to do to me that might cause bruising?

I realized how much I ignored my body most of the time, like the continual dull ache in my right knee. Now, as I thought about it, I realized that the dull ache might be cancer. As I listed all my illnesses of the past 40 years (measles, mumps, chickenpox, mono, hepatitis, a close brush with cervical cancer), coupled with my current ailments (dry skin, low energy, that aching knee and infertility), I wondered whether denial wasn't the better path. Admitting them all now seemed to make me a candidate for around-the-clock treatment.

I was assigned Justin, one of the acupuncture assistants, a tall, thin Anglo guy in his 20s. Shouldn't he be looking into IPOs with the rest of the dot-commers in my neighborhood rather than learning to stick needles into people? He led me into a tiny room with a massage table. "Undress except for your panties and put this cloth over you," he said. "See, just like a massage," I told myself as I settled onto the table and put the sheet over me.

I think it was Emerson who said that the mark of genius is the ability to hold two opposing thoughts in your mind at the same time. If so, I was Einstein. "You can interrupt this anytime and leave," I promised myself. I sat up, face to face with the Chart of Chi acupuncture points, ready to bolt past the gold man with 600 holes. The next minute I was saying, "Keep yourself open to new experiences -- remember Adrienne." I settled down again on the pillow and cool lavender sheets, my ear next to the chiming music. Suddenly, the two opposing thoughts were playing high-stakes ping-pong, which seemed more like a state of insanity than genius.

I was saved from the madness by Justin, who entered with a bucket of glass objects that looked like the globes around the '70s light fixture in my bedroom. "Show me your tongue, please," he said. My tongue? What could he find so fascinating about my tongue? He took my pulse in not one but three places. Then he went down a list of what I thought were pretty personal questions from someone I'd just met. "How is your sleeping, your bowel movements, your overall energy?"

"Now I'm going to do something called cupping to prepare you for acupuncture," he said, and asked me to turn over. I nearly jumped off the table as I felt warm oil on my back and then slight pressure as he attached the light fixture globes like suction cups, one to the base of my spine and the other two at the top of each side of my spine. This is definitely weird, I thought, as he slid them up and down each side of my spine.

"I don't get it," I ventured. "I'm here for fertility. What does this have to do with making me fertile?"

"Acupuncture treatments are for the whole body," said Justin. "We want to strengthen all of the energy in your body, which is called chi. That's why we can check over a hundred pulses in your body -- to see how the chi is flowing. If it's blocked at any point, that could be what is preventing you from getting pregnant."

I started to relax a little. This cupping stuff was like a massage. He lit a cigarlike stick and brought it near the cups. "This is called moxabustion," he said. "It's a mixture of mugworthy and other herbs, and it will warm you up and get your chi flowing." OK, even if it sounded a little like voodoo, the warm oil, gentle pressure and herbs started feeling pretty good as my relaxation got deeper. Ten minutes later, when he pulled off the glass globes, I was sorry it was over. Maybe we could just stop here and skip the needle part.

But too late. The needle lady appeared, wearing silver pants and blouse, like a spacesuit in a bad sci-fi movie. "We're going to get you pregnant," Dr. Chin said as she started to take out her needles. "Breathe in sharply, then breathe out sharply and I'll put the needle in," she instructed as she felt for my left ear.

My ear? She was going to stick a needle in my left ear? "Oh yes," she continued, "I've had lots of patients get pregnant after coming to me. One did six in vitros -- they all failed. Then she came to me. I told her to eat lamb three times a week, do the acupuncture, continue with the in vitro, and now she is pregnant."

"Show me the science, the controlled studies!" I wanted to command, but she was the one holding the sharp objects. As she made little jabs near my thumb, she continued. "We need to warm you up, like breaking a block of ice. The baby needs to come into a nice, warm room." It was one theory, I thought, and so far Western medicine hadn't worked.

"Now I'm going to do a little moxa-stick barbecue," she said as she set a small tin plate over my uterus and lit five herbal matchsticks. As if the pins weren't bad enough, I was now a human sacrifice. She placed a bell in my hand. "Ring this if you need help," she said. "You mean if I go up in flames?" I asked. She thought I was very funny. "All of my Marys are champions," she said as she left.

As I lay there, listening to the chiming music through the stereo, I fell into the deepest relaxed state of my life. At the same time, an energy I didn't know I had started infusing me with vitality. The image of a rushing waterfall came to mind, alternating with a huge, hot bonfire. I could feel something shifting inside as the tension I'd been carrying seemed to lift away and be replaced with a feeling of well-being and calm. Then I realized that even if I didn't get pregnant, acupuncture might be something that could improve my overall health. And that would not be a bad side effect at all.

It was over too soon. The moxa sticks had made their offering and I was free to leave. As I put my clothes back on, my only thought was, When can I do this again? I had fallen, converted in one go.

That night, though, I started to have second thoughts. Maybe I had been under the spell of that moxa herb or had only been too grateful that the needles hadn't hurt too much. I was in strong need of a reality check, but whom could I call?

The only person I knew who wasn't seeing an acupuncturist was my mother in Ohio. As I dialed, I was confident that her Midwestern skepticism, which bordered on paranoia, would set me straight.

But even my own mother wasn't going to spare me the needles. "I think it's great you're trying acupuncture," she said. "I'd do it, too, but this place isn't exactly crawling with acupuncturists."

"But don't you think it's just a little too trendy?"

"Well, honey, it's been around for thousands of years," she said dryly. "It's not exactly a trend."

And so my next appointment is on. Getting jabbed with needles all over for several months will be worth it if I get pregnant; at least I might lose that ache in my knee and open my heart to my acupuncture-friendly friends. But if I ever start to order room-temperature Evian, please just shoot me.

Mary Hower is a freelance writer and fundraiser. Her poetry has appeared in several literary journals including Threepenny Review.