Male nude models have a special problem female models don't: What to do if they get a woody? 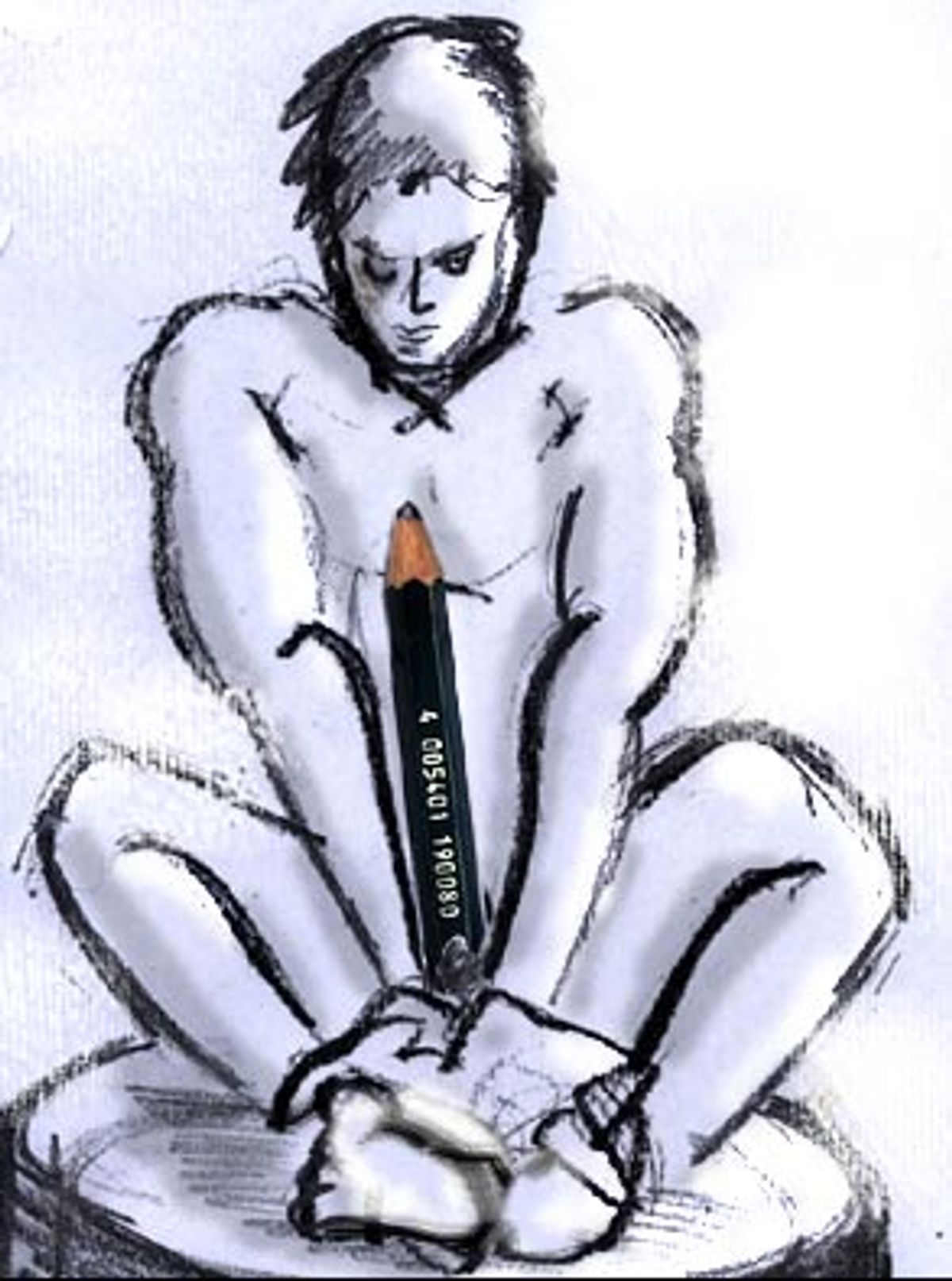 As a curious female and an art model, whenever the opportunity arises, I ask male models if they've ever had an erection while posing. Most have at least one story to tell -- though usually not about themselves.

One of the most knowledgeable people I ever talked to about the subject was Robert Speller. Speller probably hires more models than anyone else in New York as modeling coordinator at the New School for Social Research and Parsons School of Design. He started modeling in the 1960s and has seen it all: a father and son who modeled together; a couple who would pose as Adam and Eve with a live snake. In the late 1970s he set up modeling engagements for Madonna.

I asked Speller what he thought about male models having erections and he replied, "Well, men are vulnerable to the air. All male genitals change shape. There are rustlings in all of us, you know."

Once, Speller received a complaint that a model had ejaculated during a pose. Speller considered the model one of his best and called him to ask him what had happened. The fellow explained he'd been reclining with a spotlight shining right on his crotch. He continued, "Let's just say I might have been glistening."

Art schools are always looking for new models, and I hope my stories won't discourage any man from deciding to join the profession. Just a few weeks ago, I asked some artists, at the end of an open drawing session, who have been coming weekly for years and years if any of them had ever witnessed a woody. None of them had.

We models exhibit and expose ourselves when we pose, and our sexuality is part of who we are, but we don't intentionally aim to stimulate ourselves or the artists. Any male model who enters a studio wanting to wave his poker around should leave. As Jerry, one of my favorite Milwaukee models, put it, "I don't find modeling erotic. I have to be in intimate contact with my wife for that. People don't believe me, but I mostly forget I'm nude when I model." He's worked in the profession for more than 20 years, and his penis has never acted up on him.

Most male models have a strategy, like solving multiplication problems, for preventing any rustlings. "I immediately think about two football teams clashing," says a New York model. "When I experience the pain of envisioning the hike and three or four 6-foot-3-inch, 275-pound guys crashing into each other, I can guarantee I will lose my erection."

Rods do get rigid, and not all models find this revelation of the self overly comfortable. Pete became stiff in a Milwaukee studio and confessed, "I felt more naked than I've ever felt." It occurred in a small class with only four students, and no one said anything.

No hard and fast rules exist about how to handle this embarrassing situation. From what I've gathered, in general people do their best to ignore a boner. In a series of comments about nude modeling at About.com, a graduate student remembered "the sound of 20 erasers rubbing against paper [recording] the change in anatomy," as the only discernible reaction after a model had a hard-on during a pose.

Instead of obvious sexual responses, female models contend with the monthly hassle of tucking in the strings of tampons. I've never heard a female model sweat about having erect nipples, though they would be clearly visible to artists. A couple of women have mentioned to me fantasizing about sex to avoid falling asleep while holding a long pose and getting really moist. In one instance, fluid started to run down a woman's leg.

Viewing all sorts of all-too-human conditions comes with the territory for artists who regularly draw the figure. An art student told me about a model who hopped up onto the platform with a distinctly distracting "chunk of toilet paper in her butt." The student discreetly asked her instructor, "So, do I draw it or what?" Inexperienced students may publicly humiliate models whose images perplex them. "The model has such a hairy bottom it's hard to draw," a young woman blurted out to an instructor. The model managed to hold his tongue as well as his pose.

Sometimes, instructors hire multiple models. When male and female models work together, there's nothing a priori sexual about it. I look forward to modeling with men, but I'm not thinking about them as men really. What makes it fun is arranging our bodies in relationship to one another. I miss Michael, a Milwaukee dancer, elementary school teacher and part-time model, who would choreograph all our positions. This would include touching, like me resting a hand on his shoulder.

I swear, even though he was a good-looking guy, I never got turned on. We were both too busy. When a pose ends, artists expect you to immediately assume the next one, and during the pose you are looking toward the artists so they can see your face, and models put clothes on at breaks. For all the times I've modeled with another man, I've never had a chance to check out the guy's equipment for more than a minute. If I want to scrutinize a model's apparatus, I bring pencils and paper to a session and draw instead of modeling.

A Milwaukee model I interviewed was posing with another male and two female models in the 1980s when the other man stiffened. He put a piece of paper over his erection, but "a half-hour later the newspaper was still wiggling." The model supposedly left town out of embarrassment.

Kilmer gave me an example of how he dealt with possible arousal before one of his training sessions. The boyfriend of a woman planning to participate in a workshop called Kilmer to see if he could attend as well. When Kilmer welcomed him to come, the boyfriend confided he was anxious he might get an erection. Kilmer wrote him, "Erections are not only possible for someone in your situation: They are likely. They are also, however ... thoroughly appropriate." A model has no need to control himself because Kilmer values commitment over control. The model commits to "what it means for us to be human: human both as strength, and as weakness."

The school never reprimanded him and he received compliments from the teacher, who said, "A great academic drawing can be boring. But a drawing with emotional energy, even if the proportions are off, can still be a really nice drawing." Kilmer would agree. "Sex needs to be accepted and incorporated into art," he wrote in an unpublished essay, "with a careful, humble mixture of humor, prudence and delight."

In the most recent public stiff anecdote I heard, a group of female artists certainly found a model's chubby acceptable. The story started with a question: "Mom, what if I get an erection?" This isn't something most sons ask their mothers, but in this case, perfectly understandable. In August, Brian, 18, contemplated art modeling for the first time in a classroom with strangers. His mother, Kathy, a naturist who has modeled nude in artists' studios for more than 20 years, had encouraged her son to try posing for a class run by a family friend.

According to Kathy the teacher assured Brian, "If it happens, it's no big deal." The teacher further assuaged Brian's fears by explaining, "Occasionally a male model does become aroused during class, but the erection usually quickly subsides and no one is offended." Brian agreed to try.

So what happened to young Brian, who modeled for the first time in September? Not five minutes went by before he got a boner. It was an adult-education class, and Kathy attended. "I could see that he was trying very hard not to, but the more he tried the harder it got," she observed. The women all continued sketching; the sole male student was outraged. He stopped drawing and demanded Brian step down. The teacher decided to put the situation to a vote. All the women's hands shot up to have Brian stay.