By calling for early elections, the embattled Israeli prime minister buys a little time, but also places his fate in the hands of Yasser Arafat. 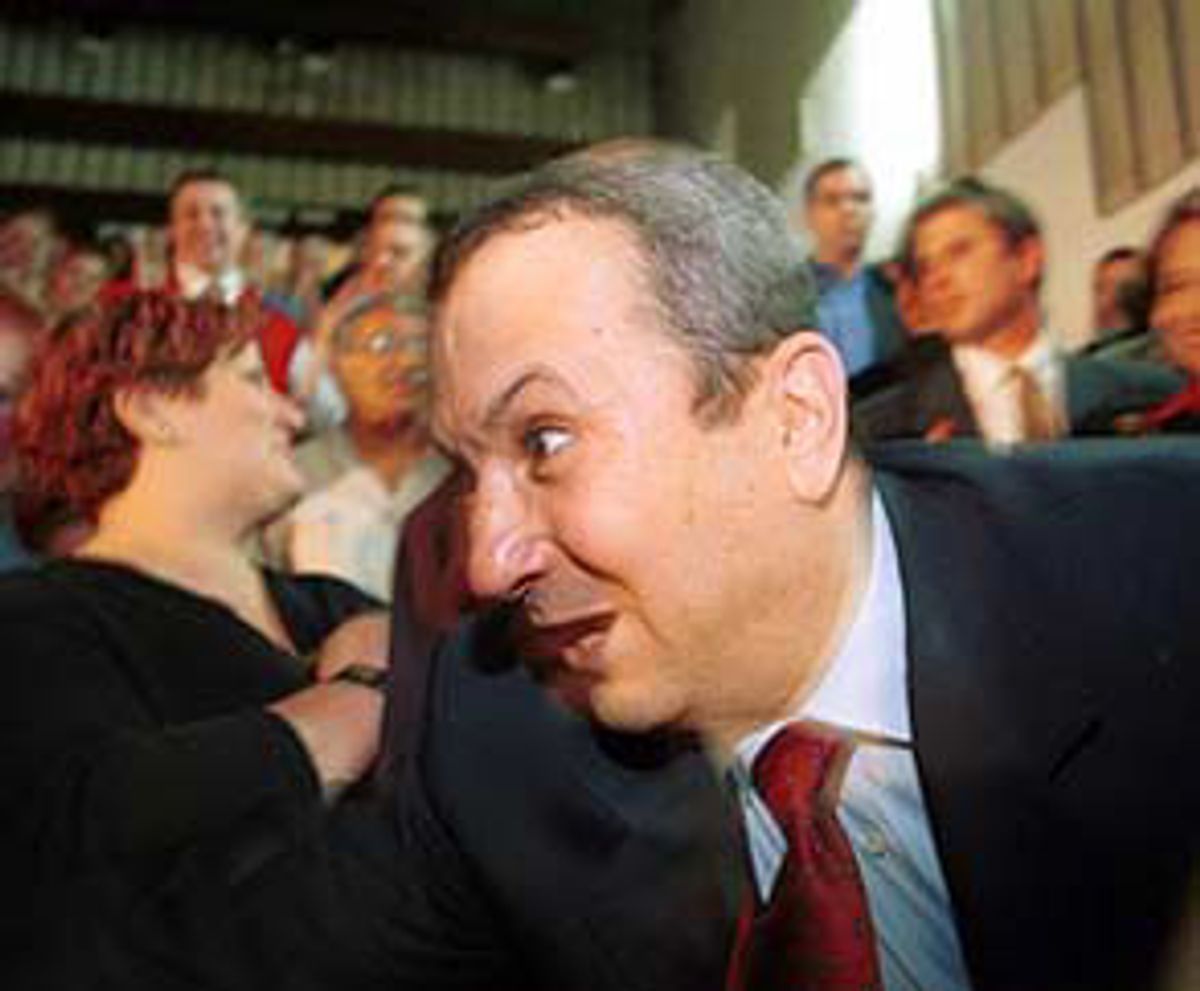 Just as the violence between Israel and its Palestinian neighbors seemed to enter a period of respite, Barak, under pressure from a majority of hostile parliamentarians, launched a preemptive strike on his domestic enemies and called for early elections. The Knesset, Israel's parliament, then passed five separate bills with a clear majority in favor of the move.

For weeks, Barak had pushed for a national unity government that would save his puny coalition and steer the country out of its current security crisis. Even on Tuesday, the prime minister speaking on Israeli radio called early elections in times of strife "irresponsible."

But when it appeared that negotiations with right-wing leader Ariel Sharon were leading nowhere, Barak seized the initiative and delivered a combative speech at the Knesset, stunning the house and the nation.

"I am not afraid of elections," he said. "In all those I have run in until now, I have won. I am proud of the steps taken by my government. If you want elections, I am ready for elections."

Barak's slow-motion fall started on the eve of the Camp David summit this summer, when the would-be peacemaker set off with ambitious plans to end Israel's 52-year conflict with the Palestinians. Elected in a historic landslide in May 1999, Barak suddenly found himself with the support of only a minority of lawmakers.

That Palestinian leader Yasser Arafat rejected Barak's peace plan at the summit only made things worse. The eruption of a low-intensity but diplomatically devastating war at the end of September was the final blow. For the past two months the Israeli public and politicians alike have berated Barak for tottering and hesitating between war and peace in times of national crisis. More than 30 Israeli Jews have died in the clashes so far.

Right-wingers have accused Barak of showing too much restraint in putting down the Palestinian uprising. Peaceniks have criticized him for doing too little to satisfy Palestinian aspirations.

Ironically, Barak's fate next spring, when new elections are likely to take place, will depend once again on Israel's relationship with the Palestinians -- a difficult and highly unpredictable relationship as the past months' violence has proven. The conventional wisdom here is that Barak's only hope is to reach an agreement with Arafat in the coming months in order to turn the elections into a referendum on peace and security.

By calling for early elections, Barak, who will be protected from no-confidence measures, has just bought himself time to achieve that agreement. Although the exact date of the next elections has yet to be finalized, Barak's time in office is likely to drag on until May. But according to most analysts, reaching peace is a long shot and Barak is something of a kamikaze for even suggesting he'll try.

Some Israelis fear that Arafat, the man who told Barak he could "go to hell" just a month ago, will strive to exact as many concessions as he can from his political hostage.

Many analysts also question the legitimacy of any peace agreement passed by a lame-duck government in a pre-election frenzy. "Barak will have a public and ethical problem in making an agreement with the Palestinians during an election campaign with the support of only one-third of the members of the Knesset," wrote Shalom Yerushalmi in the daily Maariv. "It is hard to imagine worse opening conditions."

Limor Livnat, a prominent right-wing lawmaker, warned Barak against making such an agreement: "This is something inadmissible, neither moral nor public-spirited, and I am warning Ehud Barak, just as we warned him that he would fall, that he better not try it," she said on television Tuesday.

But few are predicting that a deal will actually materialize in time to save Barak's neck. Indeed, transition periods are hardly the most propitious times for diplomatic breakthroughs.

Ghassan Khatib, a Palestinian political analyst, pointed out in a phone interview that transition periods in Israeli politics are usually accompanied by aggressive muscle-flexing toward the Arabs. Prime Minister Shimon Peres, who succeeded Yitzhak Rabin after Rabin was assassinated in 1995, launched a vicious air bombardment campaign in southern Lebanon in 1996, killing in one famous incident 100 Lebanese civilians who had sought shelter in a United Nations base at Qana. When Prime Minister Benjamin Netanyahu called early elections in December 1998 and found himself in a position similar to Barak's today, he also bombarded Lebanon's electricity plants, noted Khatib, and halted the implementation of interim agreements signed with the Palestinians.

"Because of the composition of Israeli public opinion, Israeli politicians compete in showing toughness," said Khatib. If Arafat and Barak failed to come to an agreement in July, "there is even less chance now," he said. "Barak will be less flexible in election times and Arafat will also be less flexible because of the intifada." More than 250 Palestinians have died in the current wave of violence and thousands more have been injured. To make up for the spilled blood, any deal will have to improve on the one Arafat refused at Camp David.

Although Barak is seen in Israel as the man who offered the Palestinians at Camp David a better deal than any previous leader and more concessions than many Israelis were prepared to swallow, Palestinians view him as someone who has repeatedly broken his promises by failing to implement interim agreements and whose offers at Camp David fell well short of what U.N. resolutions have promised the Palestinians since the war of 1967.

The current crisis has also put an end to the historic romance between Israel's 1 million-strong Arab minority and the Labor Party. For the first time, Israeli Arab lawmakers voted with the right to topple the government on Tuesday. After he won close to 95 percent of the Arab vote in May 1999, a poll released last week showed that if elections were currently held, Barak would get only 10 percent of the Arab vote, trailing two points behind his right-wing rival Netanyahu. Seventy-eight percent didn't know who they would vote for or said they would not vote -- a sign of the minority's alienation after clashes in which 13 Israeli Arabs were killed by heavy-handed police in riots at the beginning of October.

Israeli Arabs' disenchantment with Barak started when the prime minister failed to name a single Arab minister to his Cabinet despite the Arabs' overwhelming electoral support; it grew when he refused to meet with the High Monitoring Committee for Arab Affairs until 18 months after his election, after the Arab riots.

Barak's spectacular fall from favor is not limited to the Arab sector. Recent nationwide polls show him trailing Netanyahu by 20 points and Sharon by more than 10. That Sharon, a veteran politician but also somewhat of a political has-been, is seen as a more palatable candidate than Barak is indicative of the crisis of confidence afflicting the country as Israelis look for a leader who may extricate them from chaos. It is also a measure of Barak's personal failure. "The one responsible for this situation created here is you and you and you, first and foremost," said Sharon, head of the main opposition Likud Party, right after Barak addressed the Knesset on Tuesday.

Ironically, Sharon is widely viewed as having provoked the current intifada by visiting a Jerusalem shrine held sacred by both Muslims and Jews in a show of force aimed at asserting Israeli sovereignty over the holy site. By refusing to join a unity government unless Barak agreed to grant him veto powers over the peace process, Sharon also precipitated the government's downfall.

Yet Sharon's words have a ring of truth. In the 18 months since Barak took office, the prime minister has managed to let down most of his constituency and alienate some of his closest aides.

Driven by the idea of making peace with Syria, Lebanon and the Palestinians, Barak failed to push forward the secular agenda many electors hoped he would champion. A plan for a "secular revolution," which included dissolving Israel's religious ministry and allowing civil weddings, was briefly aired in August when Barak's peace efforts on the Syrian and Palestinian front failed.

But in one of Barak's now-trademark policy zigzags, the plan was shelved as soon as Barak realized he needed the support of religious parties to survive politically. Furthermore, his one achievement -- pulling Israeli troops out of the quagmire of southern Lebanon -- has been threatened in recent weeks by the renewal of hostile Hezbollah activities along Israel's northern border.

One of Israel's most glorious soldiers, known for his brilliant intellect, Barak has also been consistently berated for being a terrible and arrogant politician, incapable of networking and delegating tasks. By going for broke on Tuesday and keeping some of his party colleagues in the dark till the moment he stood up at the podium, at least Barak was true to form.