Earth in the balance, indeed

If Al Gore searches his soul, he can come back in four years and lead. 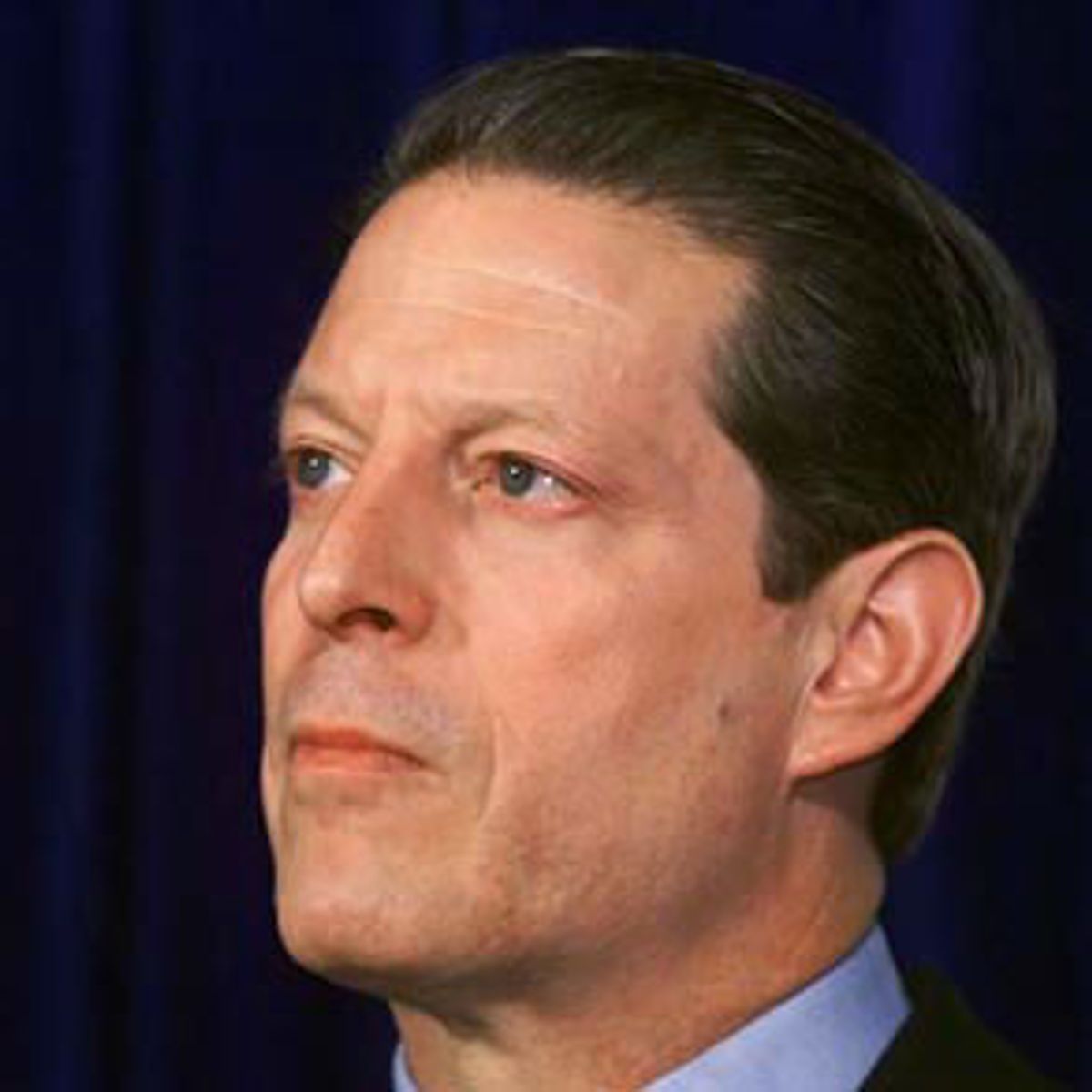 "The environmental crisis (leads me to) conclude that I have not gone nearly far enough. The time has long since come to take more political risks ... We must make the rescue of the environment the central organizing principle for civilization ... We can believe in (the) future and work to preserve it, or we can whirl blindly on, behaving as if one day there will be no children to inherit our legacy. The choice is ours; the earth is in the balance."

Al Gore, "Earth in the Balance"

Although you are still committed to winning this election, the time may come sooner than you wish to concede. If so, concession could be a blessing in disguise, if you follow it with a campaign to take the White House in 2004 with a popular mandate for the environmentalism you once espoused, but abandoned in this election.

This would be preferable to barely winning the presidency, with a campaign in which you failed the standard you set for yourself. Neither your political ads, debates nor speeches took the political risks necessary to build support for serious action on the environment. In fact, you barely mentioned it, compared to the time you spent hawking your positions on prescription drugs for the elderly, Social Security and taxes. Far from making saving the environment "the central organizing principle for civilization," it was not even a central principle of your presidential campaign. It must be, if you want to win the White House in 2004.

This will not only be good policy but, in your case, good politics. You squandered this election because you could not connect psychologically with most Americans, in large part because you were not speaking from your heart about the issues you really care about. But if you use your political exile during the next four years wisely, you can not only win in 2004 but do so with a sweeping mandate to rescue the planet. History is filled with examples of leaders who achieved greatness because of deep personal transformations that could only have occurred out of office.

You brilliantly wrote in your book, "We must restore a balance within ourselves between who we are and what we are doing." It is long past time to take your own advice, and use the next four years to align your politics with the inner passion for environmentalism that leapt off the printed page when you wrote, "I cannot stand the thought of leaving my children with a degraded earth and a diminished future." If you can mesh that passion with your fundraising prowess and the credibility you'll derive from having won the 2000 popular vote, you can be a powerful force for planetary good in 2004.

This is also crucial for you personally. The political class uses the word "psychobabble" to rule out any serious discussion of psychological issues as applied to political campaigns, which they analyze simply in terms of issues, process and polls. But if this campaign proved anything, it is that this hackneyed political thinking is little more than "polibabble," and that the real issues on which at least swing voters voted were far more psychological than political. As CNN political commentator Bill Schneider puts it (although he largely ignores his own dictum in his analysis), "the vote for president is the most personal vote voters cast."

Your trouble this election makes that clear. The "issues" broke your way. If swing voters voted on them, you would have won by a landslide. Almost all the votes you lost in this group were not due to policy but to how people felt about you personally. You lost on psychological issues like "trustworthiness" and "believability," not because of your stands on political issues like Social Security or prescription drugs. Swing voters knew you were smarter, but they connected more with Gov. George W. Bush, whose many inadequacies have produced an attractive vulnerability, puppy-like desire to be liked and personal candor.

Only if you campaign from your heart about what you really care about, speak with genuine passion and come from the inside out -- not outside in -- will you stand a chance of not merely winning, but mobilizing the nation for the goals you care most about.

I hoped you would win this time. Although your lack of courage on the environment was deeply disappointing, you would clearly be a far better president than Bush, a man who diminishes everything he touches, who could not read let alone understand your book and whose first act was to appoint Andrew Card as his chief of staff -- a leader of the fight against the Kyoto climate change treaty as chief lobbyist for the automotive industry.

But if you are to win next time, it will require more attention to psychology than politics. Your political problem, as seen from a psychological point of view, appears to stem from your deeply divided nature. As the Nicholas Lemann article in the New Yorker indicates, you are most comfortable in the realm of abstract ideas. You have a deeply spiritual core but are more attracted by New Age than traditional religious ideas, have been more exposed -- through your wife -- to the world of therapy than most politicians, have a deeply sensual side that you rarely show publicly and have far more liberal views on sensitive issues like gun control in private than you show in public. You fit rather comfortably, in short, into the baby-boomer, New Age-oriented, 45-million strong, politically liberal, cohort of "cultural creatives" identified by sociologist Paul Ray.

If there is one thing this group has in common besides relative affluence it is a distance from conventional values, mores, lifestyles and politics. Yet it is almost impossible to get elected in America today and admit to engaging in therapy, hanging with Jean Houston (look where it got Hillary Clinton) or Naomi Wolf (look what happened to you) or lounge around in hot tubs discussing Sartre and smoking dope on a lazy Saturday afternoon.

Thus you've clearly entered politics at great personal cost, forcing you to repress many key aspects of your personality in order to "do good" by holding public office. This has created two basic political problems:

1) An inauthentic politics which culminated in your un-credible emergence as a lunch-bucket Democrat at the convention after a lifetime as a centrist identified with global issues. The high-minded politics in "Earth in the Balance" is simply incompatible with the mindset of Democratic mercenaries like Carter Eskew, Tony Podesta or Tony Coelho, to whom you opportunistically turned for your political campaigns; and

2) a wooden, unfeeling, artificial, insincere, cloying public personality. You are clearly cut off from your real feelings in public. Perhaps the most poignant and revealing moment in this campaign was when you acknowledged to Matt Lauer that you realized you had a stiff personality in public, but did not believe that you could change it.

It also seems quite clear that a second major psychological handicap that cost you this election is your failure to break free from internalized parental voices which tell you you are not good enough and must constantly prove yourself. This trait, too, distances you from people, who feel you are lecturing them or trying to prove how much you know rather than relate to them on an emotional basis.

My few meetings with you, and reports from trusted friends who know you far better, indicate that you are a well-meaning and decent guy. Your public exaggerations and artificiality are evidence of your divided nature and deep insecurity, not something evil or dangerous.

I remember a Senate hearing in which you spent most of your time showing how much you knew about HDTV rather than asking a question of the witness. It seemed obvious that you were deeply insecure and felt a need to show how smart you were. I can't think of a better explanation for the many personal exaggerations since -- overstating your role in the creation of the Internet, you and Tipper serving as a model for "Love Story," etc. -- that have so bedeviled your campaign.

What would it mean to truly become "your own man," in fact as well as rhetoric, during the next four years? Only you can fully answer this question, of course. But two obvious tasks are immediately apparent.

First, you would seek to build a political and organizational vehicle that is consistent with the deep beliefs that you articulated in your book. This would not mean ignoring issues like taxes, Social Security or Medicare, which need attention. But it would mean elevating issues like global warming, biodiversity loss and aquifer depletion.

You would turn to pollsters like Stanley Greenberg not only to learn how to appeal to the "working middle class" on pocketbook issues, but to figure out how to communicate your deeply held environmental beliefs to them. You would learn how to make your theme not merely "I will fight for you on prescription drugs", but "I will fight for you so that you can leave a legacy to your children and grandchildren of clean industries generating millions of new jobs, and breathable air, drinkable water and clean and affordable energy."

Second, and even more importantly, you would challenge yourself to rise above your defeatism about changing your wooden public personality. Creating a vehicle whose central organizing principle is the environment is a crucial first step, so that you could be regularly speaking out on the issues you truly care about. But more would be needed. You would need to embark on a long, dark night of the soul and confront the psychological issues that cost you this election.

Key would be seeing your entry into private life for the first time in 24 years as an opportunity to pursue personal transformation in a way that is simply not possible for those who hold public office. The key issues are time and psychological space. It takes time politicians don't have to look back on one's previous life, conduct a spiritual and psychological stock-taking, separate what one truly wants from internalized parental voices pushing us to be what we are not. And it takes a distance from the arena to sweat through surfacing repressed painful feelings of inadequacy or vulnerability so as to become an integrated human being who displays genuine feeling in public as well as in private.

It is a tragedy that therapy with a psychologist who knows how to challenge internal defenses is probably not available to you if you wish to run for public office in 2004. There is nothing sadder about our public life than the fact that the public officials and media personalities who most need therapy for their narcissism, inauthenticity and lack of genuine feeling are the least likely to pursue it. It is not only that it can cost a politician votes. Undertaking therapy makes one vulnerable, the very feeling that most of the "Type A" personalities in public life are most on the run from.

But there are many other paths -- including deep personal reflection, contemplation, discussions, reading, video tapes, self-education courses, meditative immersion in nature -- that can help you become who you truly are, in public as well as in private.

There are many reasons to hope you will give all this a try, but no one has put the case for conceding and returning to fight another day better than yourself. Earth is truly in the balance if America cannot generate leaders who not only understand the global environmental crisis, but have the courage and skill to build a public support to save it. Clearly you understand it; summoning the courage to organize your political life around it is what you'll need to be an effective president, and person.