"The Undergrowth of Science" by Walter Gratzer 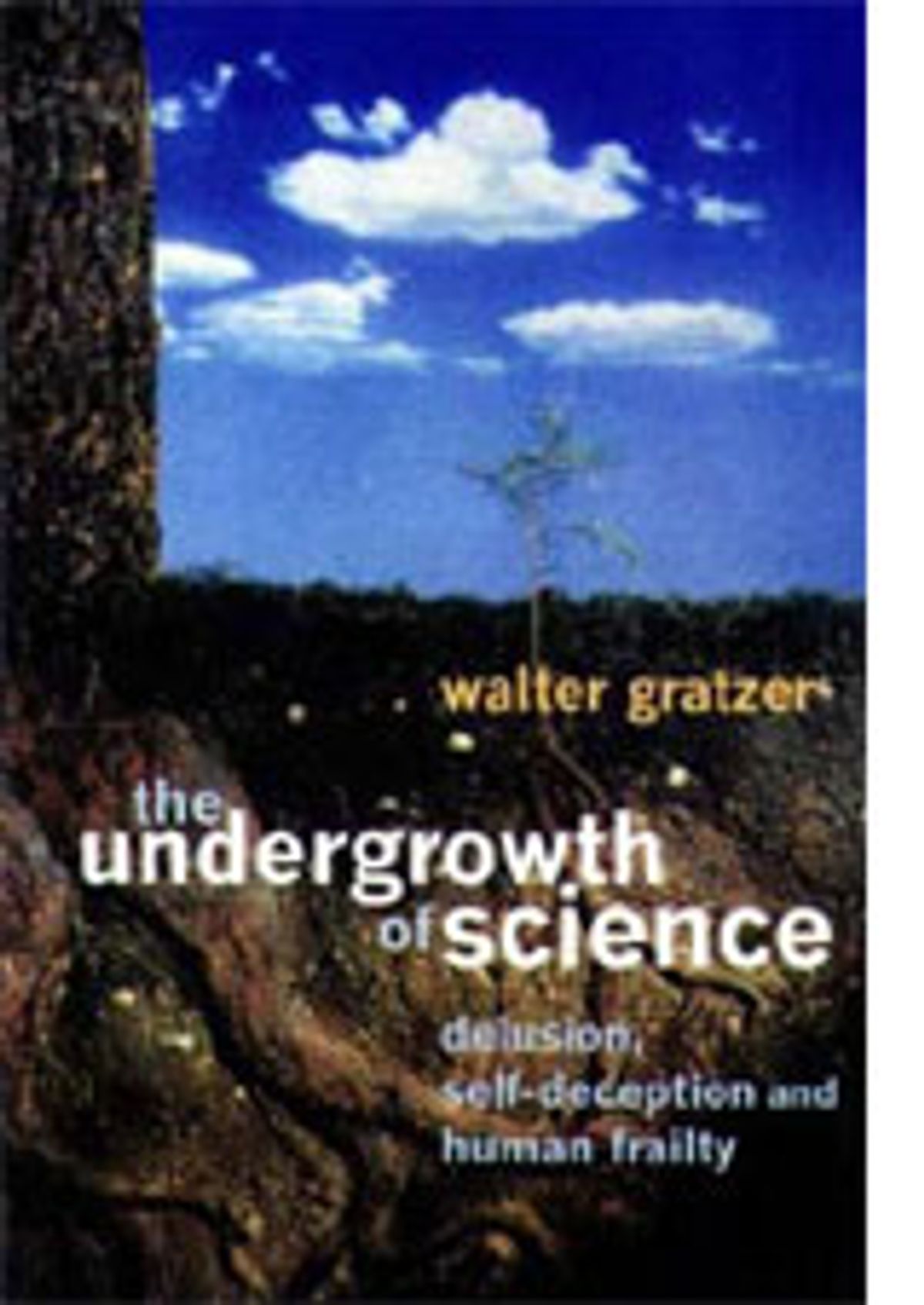 Surprising to many people, much of science is a "monkey see, monkey do" process in which one scientist does an experiment and presents the results to other scientists in the form of a publication. They, in turn, repeat the experiment -- often to aid their own work, and sometimes simply to see if the original experiment really works as advertised. Sometimes it doesn't.

Walter Gratzer's "The Undergrowth of Science" is about those times when scientific claims do not hold up. Scientists are quick to point out that this is uncommon, that science is a self-correcting process in which truth and reality are determined by the repeatability of hands-on experiments and the predictive power of abstract theories. What they don't say is that science needs to be self-correcting because of scientists themselves. Like people in other professions, scientists can be susceptible to self-deception, conceit, wishful thinking, ideological coercion and fraud.

Scientific fraud is an interesting phenomenon in itself. Books have been written about several famous cases, and more will surely follow. In October, for example, a Japanese archaeologist admitted to planting artifacts at a dig site so he could claim to have discovered the oldest tools in Japan. No Indiana Jones, he was caught on videotape. But Gratzer is interested in the unintentional deceptions that creep into science, and the political and psychological necessities that compel some scientists to cling to false beliefs in the face of common sense and scientific evidence to the contrary.

Scientists first have to mislead themselves before they can mislead others. Nationalism, or "tribal delusion," often helps both levels of deception, as Gratzer shows in the famous case of the German rays vs. the French rays. At the end of the 19th century, scientists were beginning to dissect the mysterious worlds of radioactivity, light and the atom. In 1895, a German physicist named Wilhelm Roentgen discovered a powerful new radiation he called "X-rays." Rene Blondlot, a highly regarded French physicist studying Roentgen's X-rays, convinced himself he had discovered another form of radiation. He named this radiation "N-rays" after his university in Nancy. Then he used his experiments to convince other French scientists. Foreign scientists, including the Germans, were skeptical. Partly because of German criticism, the French quickly rallied around Blondlot. The Germans had invaded Paris 30 years earlier, French lands had been annexed and both sides were still fighting pitched academic battles of "Our science is better than your science." The cross-border war of rays ended in 1904 when an American physicist who was unable to repeat Blondlot's observations pointed out his experimental errors and subjective interpretations of the results. Blondlot, however, quietly continued to work on his imaginary N-rays until his death in 1930.

Another fictitious entity that occupied many competent scientists was polywater. A Russian chemist discovered this viscous form of ordinary water in the 1960s. Its unusual properties worried some people (at least those who had read Kurt Vonnegut's tale about a strange form of ice, ice IX, that froze the world's oceans). Could polywater turn the oceans into a viscous jello? Would it impede Navy ships and end surfing? Hundreds of scientists began studying polywater and publishing papers on it. But research came to a screeching halt when Bell Labs' Dennis Rousseau wrung his sweaty gym shirt into a glass tube and discovered that his salty, protein-laced sweat had the same properties as polywater.

Irving Langmuir, an early debunker of bad science, called the delusional sloppiness of N-rays, polywater and other myths "pathological science," and the case studies in "The Undergrowth of Science" certainly support that assessment: the University of Utah's disastrous support of nuclear fusion in a thermos, homeopathy's vanishing medicines, the "Star Trek"-sounding mitogenic radiation emitted by embryos, a pre-Viagra effort to restore youth and vitality with monkey testis transplants and other acts of weird science.

Gratzer traces the steps through which researchers become deluded: "The germ of a pathological episode is usually an innocent mistake or an experimental mirage; the perpetrator is persuaded that he has made a great discovery, which will bring him fame and advancement in his profession. Once committed it is difficult to go back and to allow the principles of caution and skepticism that training and experience normally inculcate to overcome the excitement and euphoria of a brilliant success."

Gratzer also looks at some of the rigid political ideologies that relied on terror to promote and spread false scientific ideas. The Nazis, for example, banned work on relativity and quantum mechanics because it was "Jewish science" and turned innocuous ideas about eugenics into nightmares of mass murder and macabre medical experiments. Marxists in Stalin's Soviet Union tried to force modern genetics and quantum theory to accord with socialist policies. It was an uncomfortable fit for legitimate scientists; many were fired, and others were arrested and even shot.

But as "The Undergrowth of Science" makes clear, pathological science is not just a peculiar quirk of a few sloppy scientists or discredited ideologies. Often it has real consequences for ordinary people. Trofim Lysenko, a Russian peasant turned professor, managed to destroy most of Soviet agriculture and biology with his nutty theories about genetics and evolution. Crops failed, people starved and generations of American farmers earned a comfortable living selling wheat to the Soviets. Today, Lysenko's name is synonymous with scientific delusion; his smug comment defines its essence: "In order to obtain a certain [scientific] result, you must want to obtain precisely that result."

Gratzer, a regular book reviewer for Nature and author of "The Literary Companion to Science," has skillfully assembled a fascinating mixture of bad ideas from physics, medicine, chemistry, genetics and biology. Most of these ideas come from single individuals whose false beliefs manage to spread through the scientific community like a "virus of the intellect." That virus is still out there, ready to infect the susceptible. Today, for example, a handful of scientists and politicians deny that HIV causes AIDS. A few "hermit scientists" are still tinkering with cold fusion. Percival Lowell saw canals on Mars and his descendants are now finding giant faces and pyramids. Several medical researchers recently reported discovering extremely small bacteria -- nanobacteria -- that appeared to cause kidney stones in people. Last month, others repeated the work and found that "credible bacteriological evidence ... is sorely lacking." They attributed the previous kidney stone formation to common crystallization processes. Will nanobacteria disappear now or continue to exist in the laboratories of a few devoted scientists?

Edward McSweegan is a skeptical microbiologist and occasional science writer.