In the wake of his "Law & Order" days, actor Michael Moriarty is exposing Canada to his bizarre antics and right-wing politics. 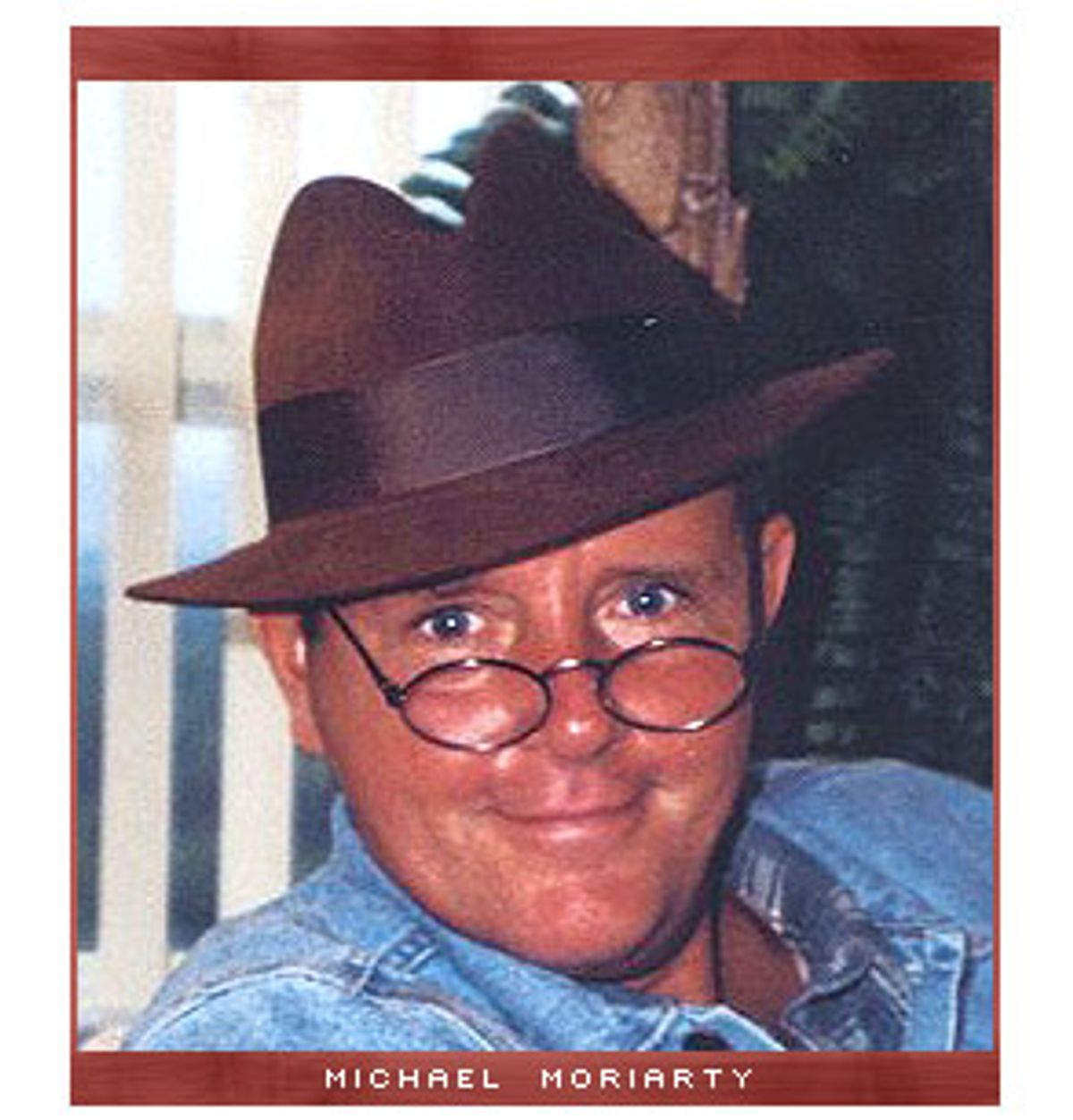 In this rainy Hollywood branch plant where American studios take advantage of the flea-bitten Canadian dollar to film on the cheap, the locals are used to seeing stars fly in for six-week stints and then flee south again without even showing their faces at the wrap party. Vancouverites can be remarkably thin-skinned about it. A couple of years back, David Duchovny's flip observation that our city gets about 400 inches of rain a day caused a regional firestorm of indignation, compounded by his demand that "The X-Files" (which, more than any other production, Vancouver claimed as its own) be relocated to Los Angeles. Vancouver knows it is only Tinseltown's $2 whore, but it keeps turning tricks and hoping the johns will fall in love.

Wink at the cheerleader or the varsity quarterback, and it's usually the mascot in the squirrel costume who winks back. Vancouver lusts after the likes of Paul Newman and Gwyneth Paltrow. So who falls in love with us? Michael Moriarty.

Best known as Ben Stone, the original assistant district attorney on "Law & Order," Emmy-winning Moriarty, a Detroit native, relocated to Canada in the mid-'90s, claiming dissatisfaction with the current state of the U.S. He left "Law & Order" in a cloud of bizarre acrimony following a meeting with Attorney General Janet Reno -- a meeting that launched Moriarty on a public crusade against what he considered Reno's anti-free-speech agenda.

His first Canadian stop was Halifax, where Moriarty, 59, made news with his plan to start a Canadian branch of the Republican Party. About a year ago, Moriarty swapped coasts and landed in Vancouver. He has floated around our city like a rumor ever since.

A very weird rumor. Moriarty, who has flirted with a bid for Vancouver mayor, is what you might call unpredictable. "He's a nut case," said one local TV talk show functionary who had dealings with him. (Nonetheless, the actor's subsequent appearance on that talk show went quite well. Moriarty was not only charming and well-behaved; the accomplished jazz pianist even tickled the ivories for the enthralled audience.)

I am to track Moriarty down for an interview. It's not my first time on his trail. I host a competing talk show with a round-table discussion format, broadcast live to a national Canadian audience. When we attempted to book Moriarty last season, a source at his agency sounded an ominous note. "You'll be talking politics? Live? Well," he said doubtfully, "maybe you'll get him on a good day."

Good days, it was hinted, might depend on proper medication. The erratic Moriarty behavior typified by his abrupt departure from "Law & Order" is by now familiar news. An unofficial love/hate fan page called The Schizophrenic Michael Moriarty Home Page collects comments by anonymous fans. The postings reveal a sympathy for the fallen hero, speculating on such matters as whether Moriarty had gone off some vital medication.

When Vancouver radio talk show host Pia Shandel expressed interest in Moriarty on-air, she promptly fielded a call from his sometime limo driver. Moriarty, the driver revealed, had emerged from Vancouver airport in the company of a woman named Margie. Moriarty called her "Mom." (In the driver's opinion, it fit.) Moriarty was pleasant; Margie was fierce -- a barfly who has apparently become Moriarty's personal handler by demonstrating an ability to match him drink for drink. ("And then some," claimed one acquaintance.)

Further enlightenment came from Moriarty himself, via the National Enquirer. "'Law & Order' Star: I'm Drinking Again & Happy As A Clam," read the Sept. 12 headline. In it, Moriarty's third wife, Suzy Calabrita, revealed that the two are separated and that after nine months of sobriety, her husband had hit the sauce again. "My drinking is under control," Moriarty retorted. "I've done six films in the last three months."

One of them, "Shiloh 2," spawned a sexual harassment suit by makeup artists. Moriarty settled. "I have never sexually harassed anyone in my life," Moriarty told the Enquirer. "This was a couple of idiot ladies on a bad film getting a really awful lawyer to sue me ... I had to settle it to get it off the plate."

And Margie? "I met her in a bar," Moriarty told the tabloid. "She's tough enough to stay in the ring with me."

Charming. Moriarty plans to give us all a chance to know and love her as Vancouver's first lady four years from now when he runs for mayor. "I know a lot about Canadian politics," he said. "I lived in Canadian bars for six years."

This was not Moriarty's first appearance in America's best newspaper. Readers who pay good money to be scandalized were pleasantly outraged when he dumped his wife of 20 years to take up with Calabrita in Halifax, events faithfully detailed by the Enquirer in 1996.

It's not just the tabloids, though -- Moriarty's Canadian political activities were detailed recently in the Wall Street Journal. As reported by the Journal, last summer Moriarty published an enthusiastic editorial in the Globe and Mail newspaper endorsing right-wing Canadian political leader Stockwell Day. "Moriarty's like Charlton Heston and the NRA. He's visible," the Globe's Val Ross told the Journal. "He's deeply exotic to us."

But the National Post, a competing newspaper that doubles as the Stockwell Day Fan Club, refused to run a similar Moriarty endorsement. Evidently the Post thought a Moriarty endorsement would be the equivalent of an ad by Cocaine Dealers for Bush. "If he wasn't a famous actor, who would pay attention to him?" grumped a Post editor to the Journal. As it turned out, nobody. In Monday's Canadian election Moriarty's man Stockwell finished a distant second to the Liberal Party. (The vote was held Monday. The votes were counted Monday night. Canada can be so small-town sometimes.)

Entertainment editors have had no such reservations about Moriarty. Whatever his status in the movie biz, he's definitely good copy. In one recent story he detailed his plans for a new film called "Hitler and Christ," a sort of "My Dinner With Andre" for a pair of deranged drifters. Sounds ideal, but it's a two-hander. Does Crispin Glover ever visit Vancouver?

I placed a call to Moriarty's agent, requesting an audience with the future mayor. A week passed with no response -- evidently I would have to go out on the hunt. The limo driver told Shandel he'd dropped Mike and Margie off at a Starbucks on Vancouver's Robson Street. That's about as specific as saying it was a clothing store on Rodeo Drive -- the intersection of Robson and Thurlow alone has Starbucks on two of its four corners.

Still, I check them out, one at a time. Another problem quickly surfaces: The teen wage slaves in green aprons don't know from 10-year-old "Law & Order" episodes. The closest they get to "Law & Order" trivia is Julia Roberts' cute boyfriend, Ben Bratt. There's certainly no point in mentioning "Bang the Drum Slowly" (Moriarty and Robert De Niro, 1973) or "Holocaust," the 1978 miniseries that earned Moriarty an Emmy. The star-struck young baristas could certainly tell me if Sharon Stone had been through recently. Michael Moriarty? He'd be lining up for his latte with the ordinary citizens he loves.

So much for shoe leather. I've about given up on my quest when one day I awake to find two messages on my machine. The first is from Moriarty. "I've got more than enough coffee and I'm ready to talk," he says. "Call me."

Message No. 2 is from Marge. "Please call Mr. Moriarty as soon as possible," she rasps, sounding exactly the way her namesake did in "Pee Wee's Big Adventure."

The messages are a few hours old. (I'm a late sleeper.) The delay could be fatal for my hopes -- Moriarty is notoriously changeable. He told the Wall Street Journal he had no political ambitions, shortly after telling the Enquirer of his plans to be mayor of Vancouver. While I dozed, Moriarty may have formulated a new state religion and then dumped it to launch his campaign for pope.

When I call, Marge answers. "Just a minute," she says. I hear her hissing across the room. "Come to the phone!"

Finally, he does. But I've slept through my window of opportunity. Moriarty's dose of caffeine has worn off and he is no longer in the mood to chat. "Interviews don't go to the core of my life," Moriarty tells me. "Everybody knows my life -- it's an open book. The unofficial Michael Moriarty Fan Club. I'm bored of talking about it. I really only want to write commentaries now -- I did one for the L.A. Times. I wrote one for the Vancouver Sun as well."

Saw that. "Vancouver after dark: The big time beckons," read the headline on the Oct. 5 editorial. "This is the story of two cities. My cities. New York and Vancouver," Moriarty began. There followed a warning to Vancouver not to go down the deceitful trail of Rudy Giuliani: "The details of his destruction of the human centre of that city, including the Disneyfication of Times Square, are well known," he wrote.

Moriarty then mused on the economic prosperity of Alberta, the wealthy province next door to British Columbia that sits happily on a massive pool of oil. "Well," Moriarty opined, "there is a big oil well sitting right in front of Vancouver's eyes and you only have to see it. It is called the Night."

After sketching a portrait of Vancouver as a new urban Mecca for sleepless global swingers (presided over, no doubt, by the mayor and his glittering consort), Moriarty finished big. "Grab the oil," he urged. "Grab the night."

"The other day I saw a small procession of the fire department [including] a couple of old but charming fire truck antiques. On the side of the antiques was written: 'BYTOWN FIRE DEPARTMENT.'

Moriarty paints a seductive picture, for sure. True, Vancouver is not presently the City That Never Sleeps -- more the City Tucked in Wearing Little Feety Pajamas by 10:30 at the Latest.

But we yearn for more. We want to be wanted by those Hollywood tourists who breeze through so quickly and carelessly. And how better to win their love than to choose one of their own as our civic leader?

"I'm the American Winston Churchill," Moriarty once said. Break out the brandy and cigars, Vancouver. Our finest hour is yet to come.