A whiff of desperation begins to permeate the Democratic ranks. 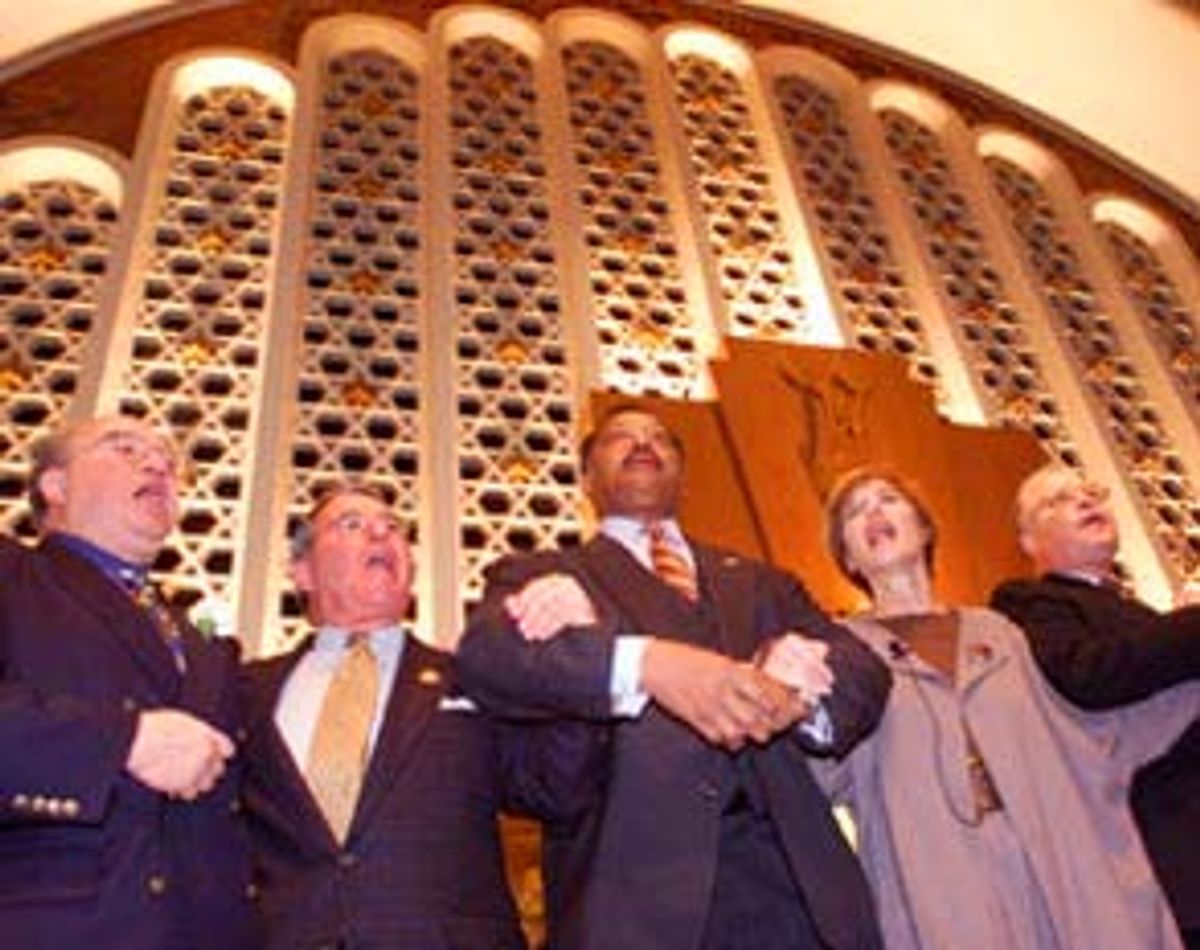 Desperation has an aroma. It repels singles in bars, clients from Willy Loman-esque salesmen, employers from the laid-off. And this week, in the Florida state capital, that smell is starting to fill the air, and it's coming straight from the campaign of those who oppose Gov. George W. Bush's claim to the presidency. It's coming from Vice President Al Gore.

The stench can be detected on Capitol Hill in Washington. There, some Democratic congressional leaders who are vociferous in their public support for Gore reveal -- off the record and behind closed doors -- that they think the man should pack it in. Even among those who support Gore and are calling for patience, "there's a sense of despair," confides one senior Democratic Senate staffer. "Every day the scenario becomes less and less probable."

Even some of the earnest Democrats slaving away for Gore on the ground in Florida don't hold out much hope that this is going to end well for the vice president. The legal hurdles are too daunting. In order for Gore, who trails Bush by 537 votes in the certified tally, to end this in the White House, each one of the following dominoes must fall precisely right in the next 12 days:

1) Circuit Judge Sanders Sauls -- or, alternatively, the Florida Supreme Court -- must allow the following net votes for Gore: the 215 late manually recounted votes from Palm Beach County; the 157 votes that came from Miami-Dade County's partial manual recount; and 51 votes from Nassau County that showed up after the manual recount, though not on Election Night, and were not included in the certified state tally.

2) Sauls or the Florida Supreme Court must rule against the Palm Beach County canvassing board's decision to exclude the 3,000-odd "dimpled chad" ballots, and against the Miami-Dade canvassing board's decision not to evaluate the 10,750 "undercounted" or "no-vote" ballots that didn't register a presidential preference in the machine count and recount.

(The reason that scenario No. 2 alone will not be sufficient to put Gore over the top is that almost no one believes that the Florida Supreme Court, which has already ruled that acceptance of "dimpled chad" ballots is at the discretion of local canvassing boards, will direct Palm Beach to accept them. As for the Miami-Dade undercounted ballots, the Gore camp only expects to pick up 150 or so votes there.)

3) These ballots must contain enough votes for Gore -- combined with the 215, 157 and 51 votes gleaned in the sequence outlined above -- for him to overcome Bush's certified 537-vote margin of victory.

4) The U.S. Supreme Court must not rule that the Florida Supreme Court overstepped its bounds in extending the deadline for ballots to be received by the secretary of state's office.

5) The GOP-controlled Florida Legislature decides not to assign its own electors if the above hasn't been decided by Dec. 12, as seems likely. (Admittedly, if the Florida Legislature is forced to step in, the political situation will be explosive and the outcome even more impossible to predict than it is now.)

Other long-long-long shot alternatives: The Florida Supreme Court could rule that Palm Beach County's "butterfly ballot" was an illegal ballot and demand a revote. Or a judge could toss out all of Seminole County's 15,000 absentee ballots because the elections supervisor allowed GOP operatives to -- perhaps inappropriately -- fill in voter identification numbers on state GOP printed absentee ballot applications.

A tall order, no? I ask CBS legal analyst Andrew Cohen what the odds are that the above all happens. He demurs from predicting. "Our sound man has been right more often than I have," he says.

But despite the confidence of Gore attorney David Boies, it's not tough to sense the unlikelihood of the above falling into place in the desperate stink that permeates the Democratic effort here in the Panhandle.

The press conferences that trot out civil rights leaders making unsubstantiated allegations. Endless parades of "disenfranchised" victims of Nov. 7's typically less-than-perfect polling activities who reject the reality that shit happens, to a certain degree, in every election. Or the ridiculous conference-call photo-op among Gore, Lieberman, Senate Minority Leader Tom Daschle, D-S.D., and House Minority Leader Dick Gephardt, D-Mo., on Monday afternoon -- one of the lamest bits of political theater this country has seen in quite some time.

Wednesday was no different. Almost every single Republican governor has been in Florida arguing Bush's case. Wednesday morning the Demos sent four of their own before the media. (One of whom -- Pedro Rosello of Puerto Rico -- isn't even from a state.) They wander into the state Senate hearing room to tell the media that they, too, support Gore's latest legal gambit.

"We're here in support of Vice President Gore's very principled position that all the votes legally cast in the Florida presidential race should be counted," says Gov. Paul Patton of Kentucky, president of the Democratic Governors' Association. Using the Gore recount team's latest in a series of coulda-woulda-shoulda vote calculations, Patton says that if the votes from Palm Beach and Miami-Dade counties had been counted, it would leave Bush with a "115-vote margin." (On Monday, Daschle and Gephardt briefly used numbers that showed Gore amassing a nine-vote margin of victory. But that calculation required scrapping some disputed military absentee ballots, a cause the Gore team has since given up.)

With such a slim margin, Patton argues, who knows what would happen when and if the court counts the 10,750 Miami-Dade ballots that haven't registered a presidential choice. These ballots are called "undervotes" by hopeful Democrats, since they have yet to be counted by hand. They're called "no-votes" by Republicans, who point out that they have been counted twice by machine, failing to register votes for president both times.

But Republicans have a cogent point to make about these ballots. "It's typical in every state in the country and every county in Florida that there are what are called 'no-votes,'" says Bush spokeswoman Mindy Tucker. "People sometimes vote for other races and choose not to select a candidate for president. It happens in every presidential election and in every state in the country." Florida registered 175,660 of these votes -- equaling 2.86 percent of the total votes counted -- Tucker points out, and Illinois, Idaho and Wyoming had even higher percentages.

Both Iowa (which went for Gore) and New Hampshire (which voted for Bush) reportedly registered more than 10,000 "undervotes" or "no-votes" in this election, and their two governors, Tom Vilsack of Iowa and Jeanne Shaheen of New Hampshire, are half of the Democratic gubernatorial force here on Wednesday. Both of those masses of ballots could have swung either state the other way.

So I ask Vilsack and Shaheen: Are you as concerned about those 10,000-ballot chunks as you are about the mass from Miami?

"I can speak only, obviously, to the Iowa situation," Vilsack says. "There is no accurate count of any undervote for the state of Iowa. The figure that you're quoting, I believe, is a guesstimate on the part of the Iowa state Republican Party ... I'm not certain, and I've not seen any specific definitive proof that indeed undervoting took place."

"We do know, in the state of Florida, and in Miami-Dade, there are 10,700 identified ballots that are apparently on their way to this very city that have not been counted," he continues. "I think of the people that cast those votes. We don't know who they are. But there's the possibility that a Congressional Medal of Honor winner could have cast one of those votes. Or a mother with two children who took the day off from work just because she felt strongly about this election, could have cast that vote ... Their vote does, in fact, matter."

Yeesh. This is what it's come down to. Hypothetical Congressional Medal of Honor winners.

Shaheen then steps up. "I am in fact concerned that every vote in New Hampshire be counted. We have a process to recount votes ... We've had 26 recounts as a result of this election in the state, and we've just finished those up this week. That's my concern about what's happening here in Florida. There has been a process to recount, and that's been delayed, it's been obstructed, through partisan political maneuvering."

Patton returned to the mike. "We're here to support the principle that every vote counts," he says.

Far more pathetic are the parades of voters the Democrats trotted out for us afterward. Tuesday they gave us four such electoral "victims," and Wednesday they trotted out 70. To what end? To try to get slumbering Americans to care about the fact that some votes haven't been counted, as happens in every election. But these voters' stories, while occasionally moving, don't seem to justify having the other 240 million Americans (remember them?) wait endlessly for a legal process that has no end in sight to come to some conclusion, sometime, somewhere, maybe.

Stephen Deitsch of Boca Raton, in Palm Beach County, told us that he "lodged a complaint against the ballot on the day of the election." That's great, but the Gore legal team isn't challenging the butterfly ballot. A handful of African-American Floridians argue about their votes being scrapped, tying the typical -- if regrettable -- incidence of ballots not being counted for various technical reasons to civil rights struggles of yore.

Recalling the poll tax, literacy tests and other shameful historic efforts to suppress black turnout, Eufala Frazier, 76, of Miami says, "We will not go down in history saying that every vote did not count."

Frazier, however, isn't sure whether her ballot was one of the ones that didn't count. "Maybe it did, and maybe it didn't," she allows when asked.

Far more incendiary comments were made by the Rev. Jesse Jackson on Tuesday. Accompanied by members of the Congressional Black Caucus -- Democratic Rep. Charles Rangel of New York, Rep. Eddie Bernice Johnson of Texas and Rep. John Conyers of Michigan -- he called for Attorney General Janet Reno to investigate his charge of a clear conspiracy to suppress black turnout.

"It is far too widespread for it to be accidental," Jackson says, providing no affidavits, no names, not any backup information at all for his charges, even after being asked.

Jackson sees the whole thing as a conspiracy against civil rights. He slammed Cheney for voting "nine times to maintain apartheid in South Africa ... against freeing [Nelson] Mandela from jail and supporting right-to-work laws."

"We can afford to lose an election, but not our franchise," Jackson said. Bush "can't look at voters who were stopped by police and asked for their driver's license and their ID badges in a hostile way [and say] 'Your pain, my gain, I'm your leader.'"

After the press conference -- which overlapped on a previously scheduled conference by the Gore recount team in which further voting "victims" were trotted out -- Jackson et al. held a sparsely attended afternoon rally outside the state Supreme Court.

"Who can vote a butterfly ballot anyway?!" asked Conyers, apparently unaware that more than 93 percent of the voters of Palm Beach County figured out how to use the ballot correctly. Of the Justice Department, Conyers, the ranking member of the House Judiciary Committee, said, "They're asking us to send them the evidence. Well, you come down here and find the evidence! Then we'll have a fair vote."

Jackson's rabbi friend, Steven Jacobs of Los Angeles, added that one woman who felt that her ballot wasn't counted correctly "said that it reminded her of standing in line at the concentration camp, waiting for a piece of bread."

But perhaps the Democratic Zeitgeist was best summed up by the raspy-voiced Rangel. Asked about the approaching Dec. 12 deadline, Rangel said, "Those of us who fought so hard for Al Gore to become the president of the United States, we still want to believe that there is plenty of time for the judges and the courts" to complete the process. "What could we do in the Congress? As a member, I think the first thing I would do is apply for my pistol."