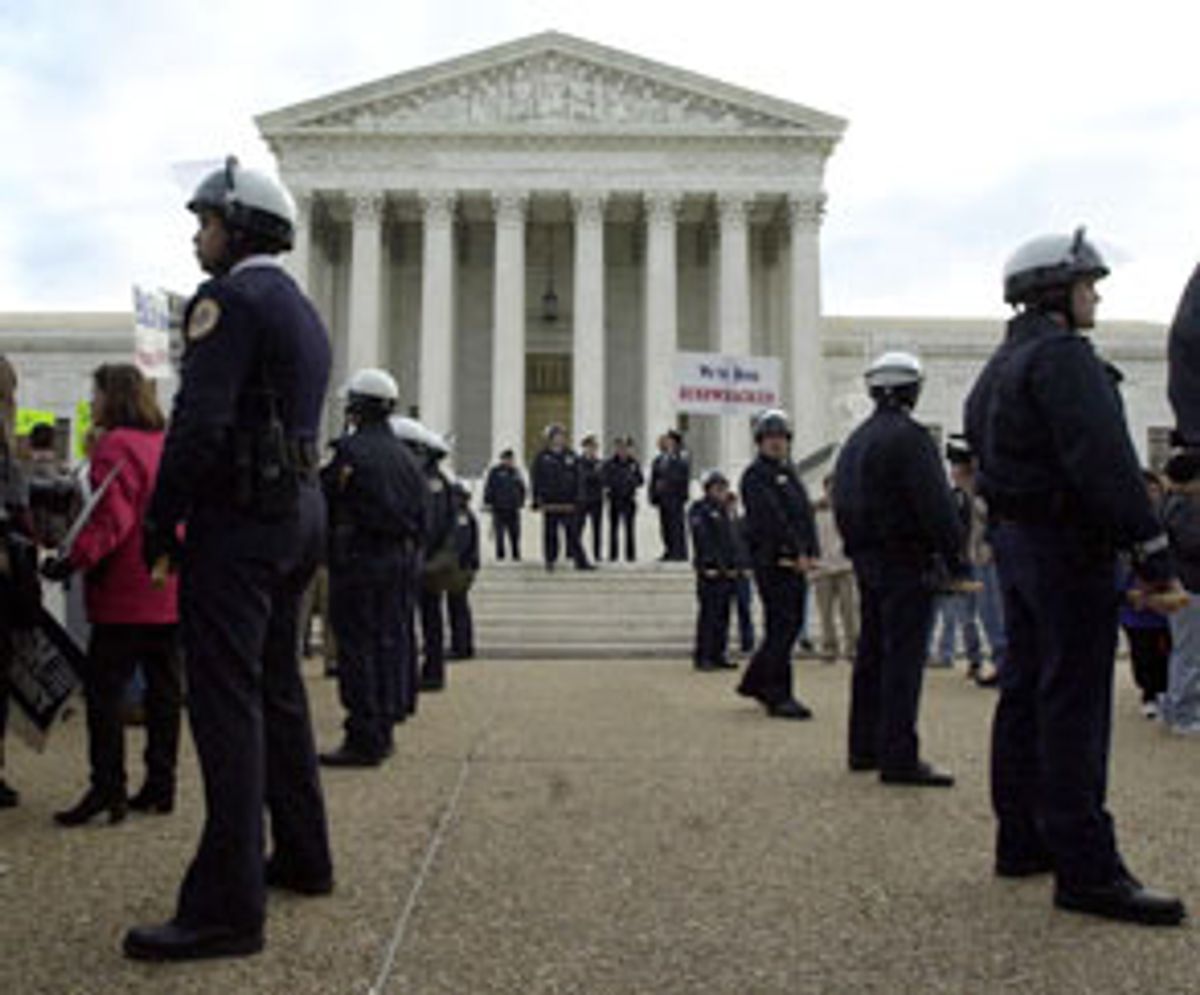 The Florida Supreme Court put the kibosh on Palm Beach County's "butterfly ballot" controversy late Friday, ruling the ballot did not constitute a large enough violation of state law to void the election or mandate a revote.

The controversy over the ballot errupted shortly after Election Day after Pat Buchanan received an inordinate level of support from largely Jewish precincts in Palm Beach County.

The court also rejected the Gore campaign's request to accelerate the recount of undervote ballots in Miami-Dade County. The question of whether a hand count of those ballots is mandated by state law is currently before a Florida circuit court judge.

Meanwhile, both sides are waiting for word from the U.S. Supreme Court, which heard oral arguments today over whether the Florida Legislature was correct in extending the Nov. 14 deadline for certifying election results. A handful of counties asked for an extension of the deadline so they could complete manual recounts of thousands of ballots.

As hundreds of partisan protesters shouted outside, the U.S. Supreme Court heard arguments Friday in the showdown between Vice President Al Gore and Gov. George W. Bush. The Republican governor is challenging the Florida Supreme Court's decision to allow manual recounts to go forward in three counties and setting a new deadline for vote certification.

The court kept to its timeline, allowing both sides 45 minutes almost exactly to make their arguments. Republican lawyer Ted Olson was questioned repeatedly about the necessity of intervention by the U.S. Supreme Court. Justices John Paul Stevens and Ruth Bader Ginsburg seemed particularly resistant to the prospect of overturning a state Supreme Court, and Ginsburg faulted the Bush team for the strident criticism of those Florida judges. "I do not know of any case where we have impugned a state Supreme Court the way you are doing in this case," Ginsburg said. "I mean, in case after case, we have said we owe the highest respect to what the state Supreme Court says is the state's law."

Laurence Tribe, representing the Gore campaign, got the toughest treatment from conservatives Chief Justice William Rehnquist and Justice Antonin Scalia, who both faulted the Florida Supreme Court for changing the vote certification deadline.

Exchanges between Tribe and Scalia got particularly heated, with each raising his voice and repeatedly interrupting the other as Tribe tried to argue that the Florida Supreme Court wasn't overstepping its bounds when it set a new certification deadline. Scalia said, "Professor Tribe, I would feel much better about the resolution if you could give me one sentence in the opinion that supports" the Democratic argument that the state Supreme Court executed its rights under the Florida Constitution. "Justice Scalia, I can do a little better than find a sentence," Tribe replied in his defense, claiming that the Florida Supreme Court acted without violating its state's constitutional constraints.

Court watchers predicted that a decision might come in the middle of next week, and that the tenor of the questions suggested a split decision. Many believe that an adverse decision from the nation's high court would be a mortal blow to the vice president. It would invalidate the more than 300 manually recounted votes Gore has picked up since Florida Secretary of State Katherine Harris originally certified the election on Nov. 14 and Bush led Gore by 930 votes.

It could also effectively end Gore's legal challenge in Florida's high court. In that case, the vice president is struggling to get disputed ballots counted in Palm Beach and Miami-Dade counties. This afternoon, 654,000 Miami-Dade ballots completed their journey to a Tallahassee courtroom. There, they will be added to the 462,000 Palm Beach County ballots that arrived on Thursday.

There's no guarantee that the ballots will be counted. Judge N. Sanders Sauls plans to hold a hearing Saturday to determine whether Gore will be able to have the approximately 14,000 disputed ballots examined for evidence of voter intent. Concerned about time slipping away, the Gore legal team has appealed to the Florida Supreme Court to force an immediate recount of the ballots, but no decision has come yet.

Democratic attorneys also objected to Republican requests that all of the approximately 1.16 million ballots be counted instead of just the 14,000 ballots in dispute. That move, Gore representatives say, is just a delaying tactic by Bush lawyers, who want to run out the clock on the veep's election challenge. Now the Bush legal team is demanding that hundreds of thousands of ballots from Broward, Pinellas and Volusia counties also be brought into the court, claiming that illegal votes were cast for Gore. GOP lawyers have pledged to call 95 witnesses at the Saturday morning hearing.

In a procedural hearing that began at 3:20 p.m. EST, Democratic attorneys are asking that Sauls trim the GOP witness list and reject the expanded Republican request for ballots.

If the vice president's election challenge fails to make progress in court, there's another case that could play a substantial role in deciding the race. A trial is set for Monday in a lawsuit that charges Republican election officials in Seminole County with misconduct, and seeks to throw out all 15,000 absentee ballots there as tainted. In that county, local GOP volunteers were allowed to add an identification code to 4,700 ballot requests from fellow party members. The Democrats were not given similar access. A carbon copy of the Seminole County case has surfaced in Martin County. There, another group of GOP election officials let Republicans alter ballot requests so that they could be valid. There, more than 9,000 absentee ballots are in question.

If the Seminole suit succeeds, Bush could lose 10,006 votes to Gore's 5,209, a net gain of about 4,800 votes for the vice president, and more than enough to overcome the current 547-vote Bush lead -- or even the 930-vote advantage for the Republican that was certified Nov. 14. Along with disputing the merits of the suit, Republicans have complained that the presiding judge, Nikki Clark, is biased against the Republican candidate because Bush's brother, Florida Gov. Jeb Bush, passed her over last year for an appointment to a higher court. Clark has declined to recuse herself from the case.

The Florida Legislature has refused to back off from the election dispute as well. In a party-line vote on Thursday, a select committee of state lawmakers authorized a special legislative session to prepare to pick the state's 25 delegates to the Electoral College. The predominantly GOP body would likely seat electors loyal to Bush, in an intervention that many Republicans have been pushing for ever since the Florida Supreme Court allowed the manual recounts to go forward in three Democratic counties. Legislators who favor the special session say that they would step in only if they felt that a fair and expedient resolution of the vote by the Dec. 12 deadline proved impossible.