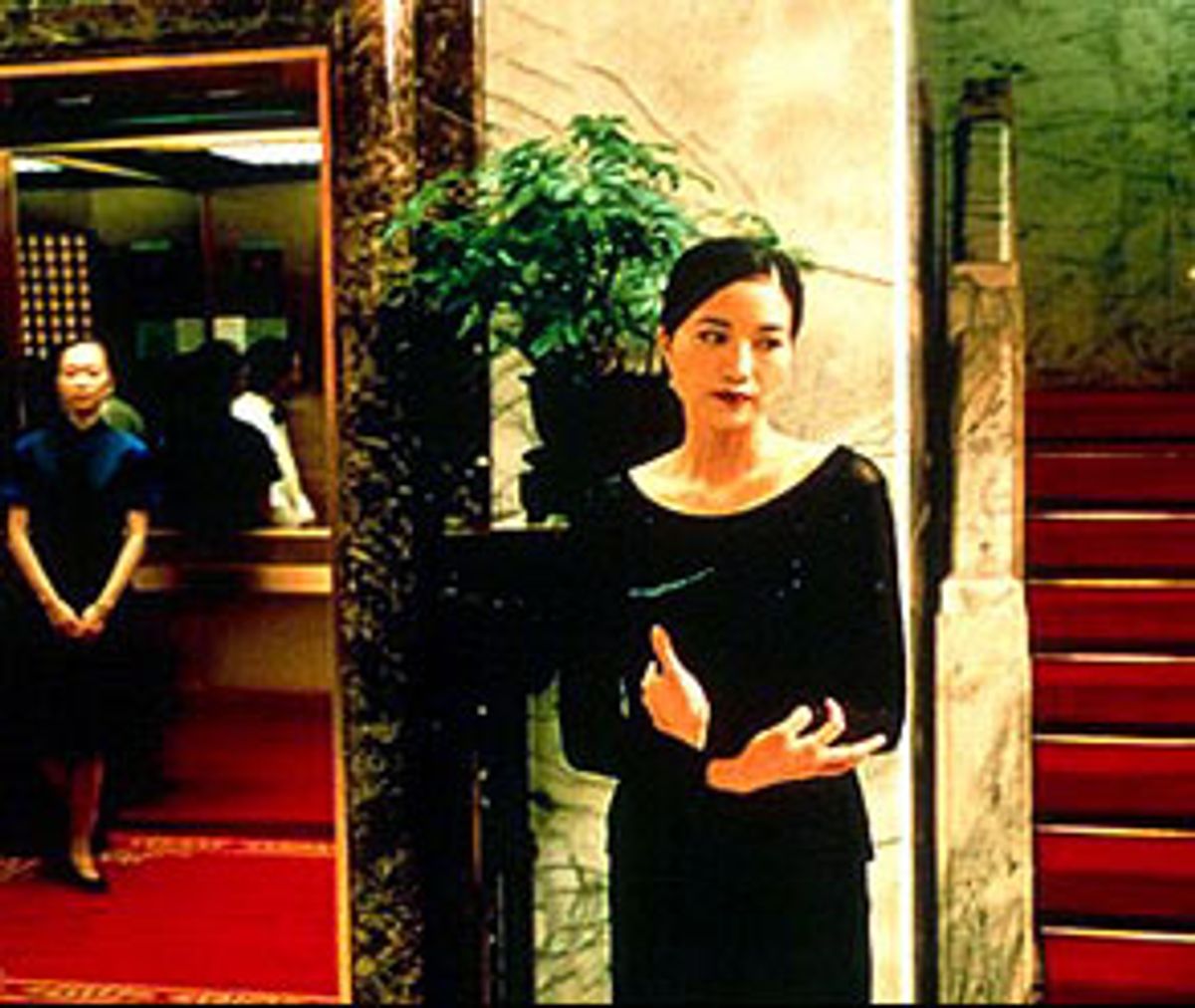 Edward Yang's "Yi Yi" ("A One and a Two") may just be the most mysterious movie of the year. There's nothing baffling about either the subject -- several months in the life of a Taiwanese family -- or Yang's pared-down, unobtrusive filmmaking; "Yi Yi" glides from scene to scene with disciplined elegance.

The mystery lies in how such a deceptively simple movie -- less a story than a collection of acutely observed moments -- achieves full-scale elation. At just seven minutes shy of three hours (a running time that flies by), "Yi Yi" is the length usually reserved for epics, and yet the feel of the movie is never less than intimate. It encompasses life's primal passages, birth and death, youthful optimism and middle-aged regret, and its characters are engaged in the terrifying prospect of questioning the seemingly unshakable foundations of their lives. Yang never strains for profundity.

"Yi Yi" is quietly overwhelming, but it's restorative rather than devastating. Yang has the rare ability of allowing us to savor the texture and weight of the moments that slide by us hour after hour, day after day without ever becoming ponderous or boring. And so when we reach the end of the film, it feels as if we've been modestly presented with what turns out to be a precious gift.

As in real life, it's a calamity that allows us to start taking notice of those moments: a stroke that leaves an elderly woman in a coma. She lives in a Taipei high-rise with her daughter, Min Min (Elaine Jin); Min Min's husband, N.J. (Nien-Jen Wu); and the pair's two kids, the teenage Ting-Ting (Kelly Lee) and 8-year-old Yang-Yang (Jonathan Chang, the sweetest little scene stealer imaginable).

After the doctors have done what they can for her, the old woman is transferred home, where her family waits for her to awaken. It will help, the doctors tell them, if they talk to her. And as each takes a daily turn talking to this woman who can't respond, it's as if they hear themselves for the first time. They become awkward, self-conscious. N.J. comes home one day to find his wife in tears. She has continued talking to her mother, as she always has, about her daily routine. But now she doesn't think it means anything to either her mother or herself.

Ting-Ting, racked with guilt that her carelessness may have caused her grandmother's stroke, sneaks into the old woman's room when everyone else is asleep to unburden her guilt and ask for forgiveness. Min Min's brother Ah-Di (Hsi-Sheng Cheng), a big baby with his own baby on the way (he's just married the younger woman he got pregnant), tries to tell his comatose mother not to worry by boasting of his success.

One of the reasons that "Yi Yi" is so refreshing is that it doesn't subscribe to the lie that dysfunction is the norm. Movies need some conflict to get our attention, but sometimes at the movies I get the feeling that the people who've made them think that the more screwed-up the characters, the truer they are. The characters in "Yi Yi" are average people at a crossroads who are suddenly face to face with the ways in which their lives have let them down. (This subject was treated earlier this year -- and just as sympathetically -- in "Judy Berlin.")

Most of the crises that force us to face where our lives have led us are things that nearly everyone goes through -- a parent's illness, a job that seems like a dead end, a day-to-day routine that suddenly seems purposeless. And "Yi Yi" is all the more poignant because we recognize that the younger characters, like Ting-Ting beginning a tentative romance that could threaten her friendship with the new schoolmate who's moved in next door or Yang-Yang being made the butt of a bully teacher's piddling little shows of power, still have these adult crises ahead of them, even though their own troubles seem earthshaking.

N.J. and Min Min meet these disappointments in their own way. Min Min goes off to a spiritual retreat hoping to find some meaning in her life, while N.J. toys with the idea of withdrawing from his deadening routine. You see a little of that withdrawal in the way he uses music to shut out the world. (There's a wonderful moment when he sits with his headphones on singing along phonetically to the Shirelles' "Baby It's You.")

And while he's respected at his job, his weariness at the endless routines of new acquisitions and deals keeps threatening to break through to the surface. He finds relief from two unexpected people. One of them is Ota (Issey Ogata, who looks amusingly like a Japanese Bill Gates), a self-made business tycoon who turns out to be as forthright as he is enigmatic. Ota tends to talk about business in metaphors, but his calmness, his refusal to exaggerate or offer false hope, suggests someone who has found a way to put his work in proper perspective with the rest of his life. (Ogata has a wonderfully calming presence.)

The other is Sherry (Su-Yun Ko), the woman N.J. gave up years ago who, like him, has married and started her own life. She accompanies him on a trip to Japan and while the two don't fall into bed, they begin sorting out the emotions that have been left hanging between them all these years.

"Yi Yi" is like an honest version of "It's a Wonderful Life," but where Frank Capra works to erase and deny any of the doubts that come from the choices we make, Yang never denies those doubts. This is a movie that embraces compromise and regret, not as a sellout, but as the inevitable state of things and not something that makes the life we settle for a lie.

It's a measure of Yang's offhand method that the comic scenes involving Yang-Yang are the place where the director makes his statement about his art. Yang directs little Jonathan Chang beautifully, never pushing his cuteness on us but allowing us to experience it for ourselves. Yang respects the seriousness of children. Yang-Yang goes through life inquisitively, pragmatically, testing out what each new experience tells him. He has the soberness of a little old man in the body of someone to whom everything is brand new. That's what makes him so funny.

It's also what makes him the filmmaker's stand-in. Yang-Yang uses the camera his father gives him to photograph everything around him, at one point embarking on a series of pictures showing the backs of people's heads and then presenting his subjects with the resulting photos. It's one of the odd things that kids do, but it's also a perfect metaphor for what a filmmaker does: He shows us the parts of ourselves that we can't see.

It's too early to tell whether Edward Yang is a great filmmaker, but he has greatness in him. He has a way to go to be equal to the great humanist filmmakers -- Jean Renoir, Vittorio De Sica, Satyajit Ray -- but like them he works to remove barriers between us and the people on-screen. Even when Yang shoots the characters from a distance or through glass we're never emotionally removed from them. Those distances and obstacles are what they have to learn to overcome. "Yi Yi" makes you wish that Renoir, De Sica and Ray were here to see it. They'd likely recognize a filmmaker who thinks that the highest ambition he can aspire to is to be absolutely clear-eyed about the people he puts in front of his camera, and still love them.