She's ready for her close-up

Too bad her son, poised to costar with world-famous thespians, lacks motivation. 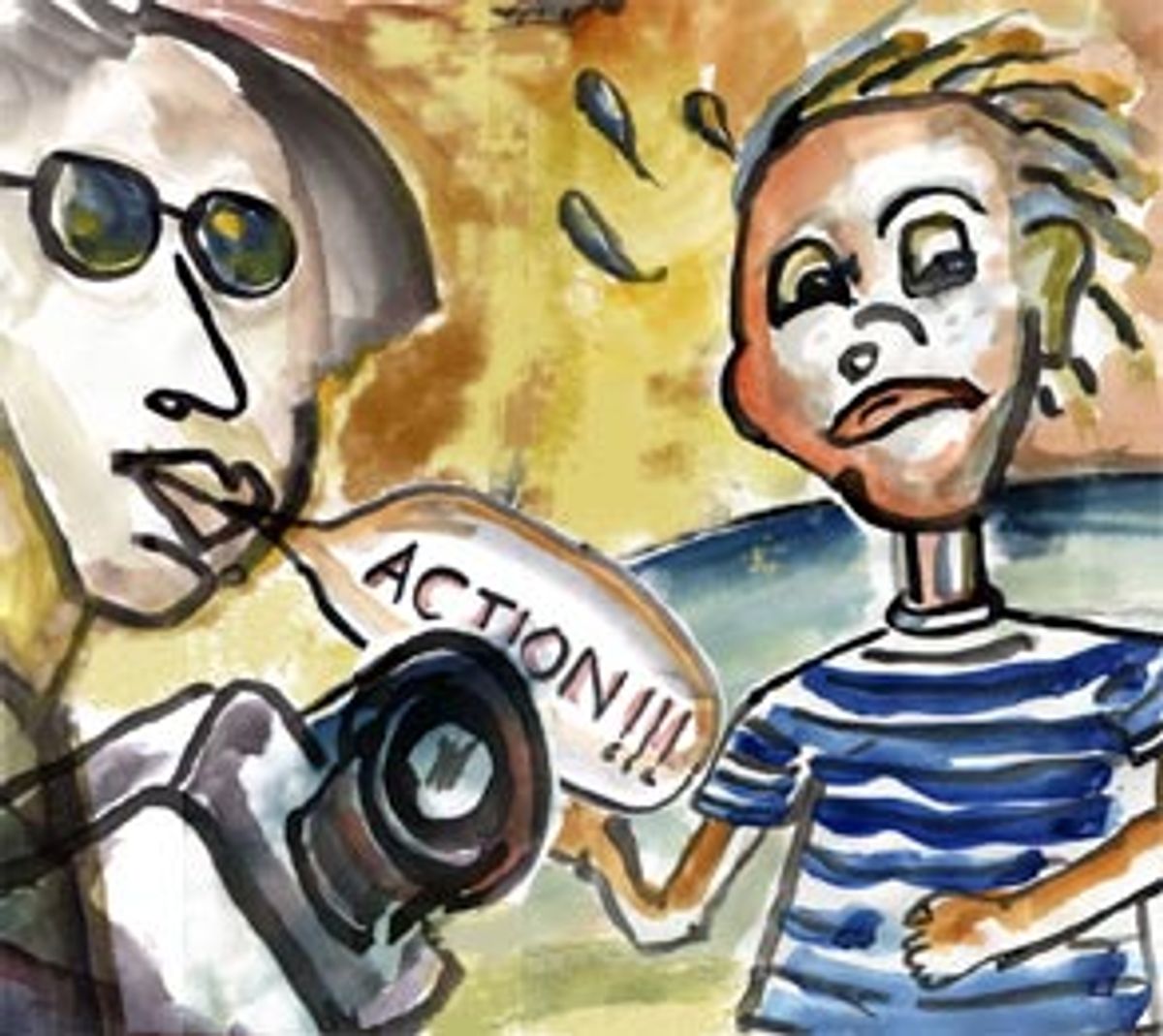 The casting agent spotted my 11-year-old son at his gymnastics class.

"Would you like to read for a part in a movie?" she asked him. Reid shrugged. "Here, take my number," she said. "Ask your mom to call first thing in the morning to set up an appointment."

Before I called, I asked my son, "Are you sure you want to do this, honey?" Secretly I hoped he would tell me that he'd always wanted to act. When I played Helen Keller in a junior high school production of "The Miracle Worker," I vowed that acting would be my life. It was only years later, after grueling repeat performances of "The Fantasticks" and "Arsenic and Old Lace" -- and especially after playing the lead in a college production of "Antigone," grim even in French -- that I recognized the main reason I'd been smitten with my first role: Only one speaking line. But still I'd been seriously seduced by the mystery and the glamour of acting. Spotted by a casting agent!

My son, not seduced, was at least game. "Why not?" he said. "It might be a good experience."

The T-shirt Reid happened to be wearing when I picked him up after school on the way to the casting director's was white once. It hung almost to his knees, so that just the hem of his shorts -- which were dark and very large -- peeked out, like a droopy black slip, underneath. In the cab on the way uptown, I watched him consume an entire pack of red licorice; a light stain extended from the corners of his lips, encircling his mouth in a soft halo. He turned to me and knocked his baseball cap up off his face with the back of his wrist.

"Think they'll like me?" he asked. He smiled his huge, beautiful, megawatt smile. His teeth were pink.

There were already four boys with their sitters or moms slouched around the heavy wood table in the conference room when we arrived at the casting director's. They all gave my son and me the once-over as we walked in. We sat. I read the paper. Reid studied for his math test. I wondered if the other boys were invited here, too. They were swapping stories about their agents. One of the kids, who claimed to be 12, looked as if he could have used a shave.

A chipper young blond woman popped into the room. "Is everybody here?" she asked brightly. She spotted my son. "Reid!" she said. "I remember you!" She gave him a copy of a short script.

"Does everyone know the story?" she asked.

My son and I were the only two who shook our heads. "OK," she said. "Ohh-kay. So the story is ... " And she went on to weave a confusing and disheartening tale, dropping the names of two famous actresses and a very famous actor like breadcrumbs along the way. Everyone in the room seemed to get the story but me. The characters wandered around in my head like lost children.

"But then ... why is Grandpa in the hospital?" I asked dimly.

A moment later, my son left to read. I gravely slipped on my reading glasses and pretended to study an editorial about budget cuts while I fantasized about the intimacies I would soon be sharing with actress No. 1.

"This dialogue seems stilted," she confides. "Will you help me fix it?"

"Your son is so intelligent and well-behaved," says actress No. 2. "So beautifully brought up."

I hadn't even really looked at the page when Reid stood before me, pleased. "We'd like him to come for a callback," Chipper said, "or you can stay for another half hour and we'll see him again." I glanced at Reid, who nodded.

We stayed. As I stared at the editorial page, the famous actor and I relaxed in his trailer. "I think I'm falling in love with you," he says.

After the second reading, the casting director called me out of the conference room. "I'd like him to meet the [prominent and distinguished] director," she said.

I had resolved to remain neutral about encouraging my son -- that is, despite my excitement, I wanted to leave the decision about pursuing the part to him -- but when I heard this name, which sparkled with celebrity and allure like the glittering names of the cast, some hold I had on my resolve just gave way, and I felt my perspective, once moored securely on a pillar of good sense and reason, slip swiftly away.

I found myself really wanting my son to want the part, and really wanting the director to choose him for it. This was a big feeling, and a childish one, like when you know what you want your main Christmas present to be, and you start hoping for it. That feeling -- of wanting my son to be the gifted one -- persisted and grew. I watched the other mothers more carefully, noticed how they coached their boys, told them to straighten up, primped them as if they were looking not at their children, but a reflection of themselves.

Even as I recognized my own desire to push my son, their behavior repulsed me. I was determined not to give in to it. I didn't want to be an obnoxious stage mother, using my boy to fulfill my frustrated fantasies. More truthfully, I didn't want to appear to be an obnoxious stage mother, but I might have been quite happy to see my boy fulfilling my fantasies. So I affected a detachment and a neutrality I didn't feel. I told Reid that the casting people and the director see hundreds of children, that the chances of getting a pivotal part are minuscule, that acting in a movie is hard work (though I'm not sure I believed that last part).

I asked him just once if he wanted to take the time to look over the script before he met the director -- though I was dying to read it through with him, if only to see how he did it. And my performance as I escorted him to the meeting: Oscar material. For all my inward excitement, you would have thought I was taking him to have his teeth cleaned. I waited for him on a folding chair in the hallway, yawning.

The director liked him. Would I please call to set up an appointment so that he could get Reid on tape the following week? Would I! Giddy, I struggled to contain myself. "So, my little Barrymore," I said to Reid on our way home, "this is getting kind of, you know, exciting, isn't it?"

"Exciting?" said my son distractedly. "What time is it? Have I missed 'The Simpsons'?" And then almost as an afterthought: "They told me the movie was going to be filmed in September, and asked me if I minded missing a couple of months of school. I thought about it and I said that I did mind."

"What!" I said, unraveling fast, as our cab sped downtown, away from the director's office. "You said what? Honey, when you're my age, do you want to look back on the year you were 11 and say, 'I could have been in a movie with Meryl Streep and Diane Keaton and Robert De Niro, but I wanted to learn about polynomials instead'? This could be the chance of a lifetime!"

Reid gave me a fisheye look. "Not my lifetime," he said.

I argued halfheartedly, but I already knew that if my son chose not to travel down this particular road I would respect his decision, even if I thought he might one day regret it. So I gave it up, my fantasy of joining -- even peripherally -- the acting biz.

Reid did return for the taping because I insisted. To his great relief, that was the last we heard from the casting director. My disappointment was considerable, but it didn't last very long. I realized I had raised a boy who knew exactly what he wanted, and said so, and who was not nearly as dumbly star-struck as I. That's a supporting role I'm proud of.

Valerie Monroe, consulting editor at Parenting magaine, is the author of two books, the most recent of which, "In the Weather of the Heart "(Doubleday), is available at iuniverse.com. She lives in New York.