Back to the civil rights barricades

What's at stake in Florida is nothing less than the right to vote and to have it count. And once again an angry, elitist GOP is on the wrong side. 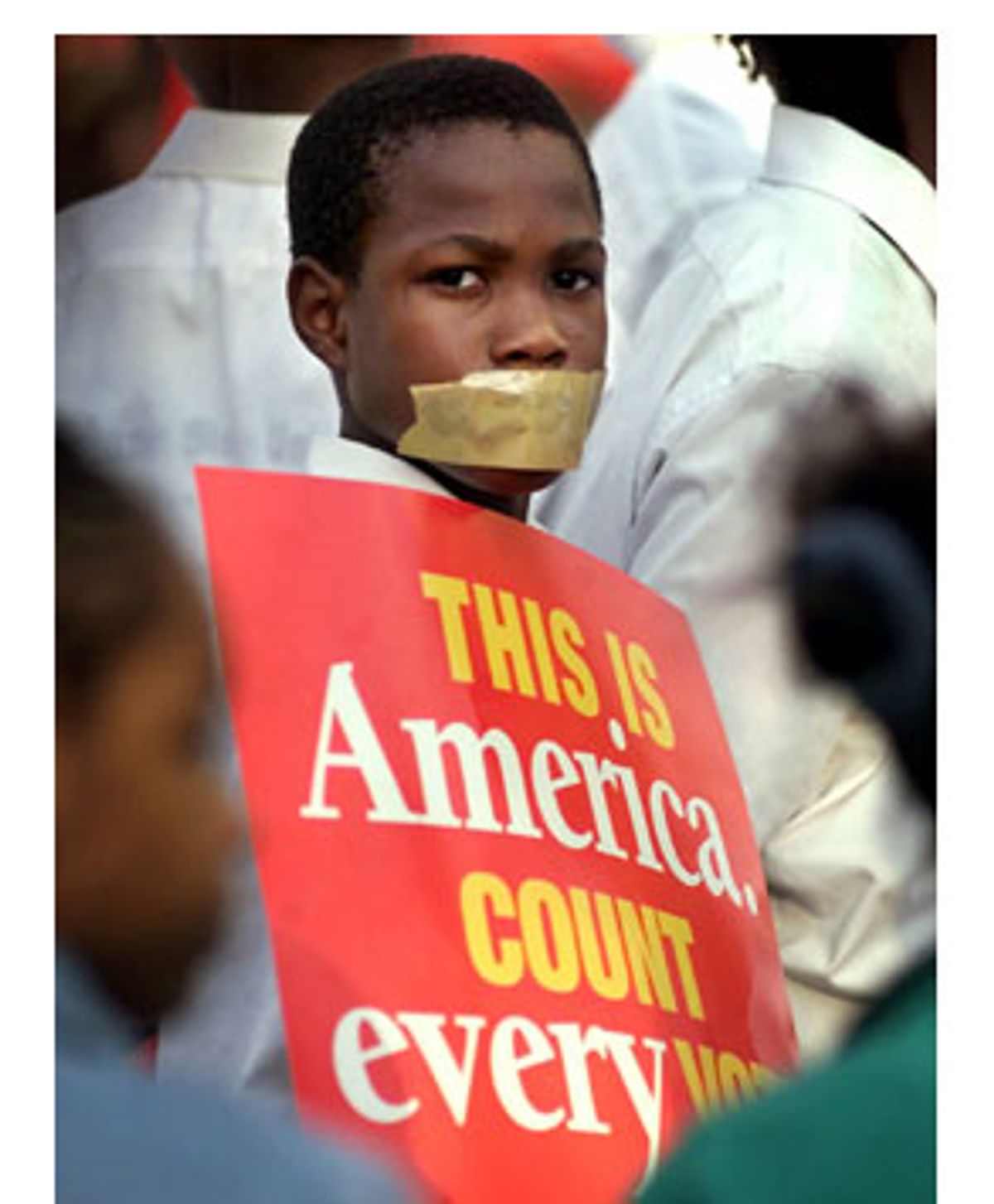 What is really driving conservatives wild with selective indignation? Why did Republicans put aside their law-and-order scruples to run riot at the Miami-Dade County Building during the on-again, off-again manual recount the day before Thanksgiving? What drove a Republican Wall Street Journal columnist to commend this "bourgeois riot" (his words) on the grounds that conservatives had belatedly learned from liberals that they had to get tough?

Why does the National Review cover scream, "Thou Shalt Not Steal"? How is it, when the diehard opponents of judicial activism are the ones who took the fast lane to the U.S. Supreme Court on behalf of George W. Bush, when the opponents of hand recounts in Florida want a hand recount in New Mexico, when the sticklers for election law who demand acceptance of thousands of absentee ballot applications completed by Republican operatives, that Al Gore is cast as the candidate who will do anything and say anything to win? Why do both Democrats and Republican faithful now tremble with rage?

Repeatedly during the endless 2000 campaign we were told that fat and happy Americans were indifferent to these candidates whom prosperity drove helplessly toward the center. We watched rival brands Gore and Bush, forced to differentiate themselves at the margin, showing off their respective woofers and tweeters in the form of rival prescription drug plans and the like. But the core partisans understood that the campaign was not the coded dumb show the candidates were performing.

Hardcore conservatives, especially in the reconstituted Confederacy that is the base of their base, well understood that Dubya was their guy. The press forgot, but they did not, that Bush was the good ole boy who dropped in at Bob Jones University and the fella who supported South Carolina's right to fly the Confederate flag. On the other side, most of the Democratic base, especially blacks and union voters, however unenthusiastic about Gore, understood him to be the only alternative to Republican indifference, and turned out for him with pragmatic glee.

The campaign took place in front of a curtain, but backstage, behind the masquerade, the center-leaning "positioning" and the closely guarded talk, a muted battle was in progress.

It is muted no longer. It is the latest episode of the social-cultural civil war of the '60s. It is indeed "a war for the soul of America," in the 1992 words of one of its most passionate exponents (and the unwitting recipient of thousands of Jewish and black votes in Palm Beach County), Pat Buchanan. It is back in earnest and with a vengeance.

It has a lineage. To the right, Gore is Clinton with the polish stripped away. (No wonder he acts wooden.) To Southern and Western conservatives the vice president is the Big Green Monster in Waiting, ever and always a hardcore environmentalist who is soft on labor and liberals (while the left only wishes that might turn out to be so). The centrist Gore's left-wing bona fides are confirmed by his association with President Clinton, the walking, talking personification of everything conservatives hated about the '60s: the smart-mouthed Ivy Leaguer; the draft-dodging, noninhaling, minority-loving, gay-embracing, Hillary-marrying sumbitch who got the girls and had the gall to win the presidency.

They loathed him long before they or anyone else heard of Whitewater or Monica Lewinsky. In the early months of 1993, the first days of Clinton's first term, a right-wing publisher was already selling a calendar called "365 Reasons to Hate Bill Clinton." They seized chance after chance to disable him, only to flop. In 1994, Newt Gingrich handed them sweet revenge by taking back Congress for the GOP, only to overreach badly. Enter Lewinsky and Ken Starr, whereupon an unscrupulous gang of the right fought like crazy, scored many points, tied Clinton up in knots, only to lose again.

The right still hates the Clintons -- and Gore by extension -- with a virulence that, if it came from the left, would be viewed as felonious. Just a few weeks ago, Senate Majority Leader Trent Lott of Mississippi was heard wondering darkly whether Hillary Rodham Clinton would make it to the Senate -- "she might get hit by lightning" -- just as, after the 1994 Gingrich victory, Jesse Helms said that if President Clinton wanted to visit North Carolina, he "better have a bodyguard."

Right-wingers like Lott and Helms understand, far better than the holdout left, that the Clintons' centrism was liberalism chastened, liberalism picking itself off the floor after more than a decade of ignominious defeat. The Clintonian Third Way was a moderate means to a radical end -- terminating the Republican dominion that kicked in with Richard Nixon and solidified with Ronald Reagan, threatening to mire the country in tax-cutting, deficit-building, anti-government paralysis for decades to come.

Since Reagan's glory days, of course, it has been downhill for members of the far right. Sure, they held the White House for 12 years, but couldn't take Congress, or Hollywood, or the networks, or the universities (not to their satisfaction, anyway). In 1994, they captured Congress for a man of the '60s, Newt Gingrich, but still had no president. The wily Clintons outsmarted them at every turn. Finally, in the affable empty suit of young Bush, they came upon a candidate who for a time seemed like he could be the Clinton of the GOP -- sufficiently raffish to make them look like the party of fun, sufficiently mealy-mouthed to reassure the uncommitted center -- but in their hearts they knew he was right. They had been thirsting in the desert for a long time, and at long last they were about to taste the elixir of revival. The cup was on its way to the lip ...

Then look what happened.

No wonder they're furious enough to riot over Florida. So far, they have turned to the streets in numbers greater than the Democrats. Whatever they say about the unimportance of Washington, they know perfectly well where the power is. Talk about entitlement.

Thus our current passion play. The issues are legal and technical, but the passions welling up are familiar, fierce, fundamental. We may be tired of the '60s, but they're not tired of us, because the collision of principles that took place then is still producing aftershocks.

For the left, the stakes are evident, or should be: Let the people decide. This slogan of Students for a Democratic Society was an abstraction, but in the background was knowledge -- knowledge of the terror and oppression that befell huge swaths of America when people were kept from deciding their political fate. What could be more fundamental for a democracy than the right to vote and to see one's vote count?

Defending idiotic electoral arrangements, smirking at subliterate Florida voters (the Weekly Standard's Matt Labash called the agitation about the Palm Beach ballot "the dance of the low-sloping foreheads"), the partisans of the right now reveal themselves to be the lovers of oligarchy we always feared they were. Like the John Birchers of yore, they are essentially insisting that this is a republic, not a democracy. Against this hauteur, the left clamors for the right to vote and the right for votes to be counted. Many pent-up passions collide now.

Long overdue. We had become rather casual about civic boilerplate, with roughly half the voting-age population apparently indifferent to the exercise of the franchise. But the issue of the franchise -- that it be universally available and authentically tallied -- is bedrock. Not so long ago, the country trembled because the civil rights movement properly recognized that the right to vote is a foundation of democratic self-government. This is not ancient history. Within the lifetime of the next president of the United States, people took their lives into their hands for trying to vote. In Florida alone, on Christmas night of 1951, Harry Moore, the head of the state NAACP, and his wife, leaders of a voter registration campaign in Jacksonville, were murdered, their house blown up by a bomb. These murders, along with others throughout the old Confederacy, were never solved.

Since Election Day, the NAACP has conducted lengthy hearings in Miami, mainly out of view of the press, collecting much testimony to the effect that African- and Haitian-Americans had their right to vote systematically infringed. Now the Justice Department is belatedly investigating. Newspaper after newspaper -- on Sunday, it was the Washington Post -- has shown ways in which the ballot problems that plagued Florida hurt minorities and the poor far more than the white and affluent. It's clear why the Bush campaign has resisted all efforts to count Florida votes more effectively: A computer model used by the Miami Herald shows that if the many well-documented ballot problems hadn't plagued the state on Election Day, Gore would have won by 23,000 votes.

And where Democrats defend the hitherto disenfranchised, Republicans stand up only for overseas soldiers, some of whose ballots without postmarks weren't counted. Invoking the military, the GOP makes it seem as if antiwar demonstrators were once again burning the American flag, all over Florida. Familiar battle lines are being drawn.

Although the 24/7 chat shows obscure it, we have returned to a core and classic political divide between right and left: the question of who decides. But politicians on both sides have largely booted it. For decades, political incumbents threw up obstacles in the way of reforming archaic voter registration laws and procedures. (What, me worry? I'm in office.) Much lip service was paid to the sanctity of the right to vote, while ignoring the declining number of voters who chose to exercise it. Institutions were indifferent. A motor-voter law passed -- finally signed by President Clinton after two vetoes by Bush père -- but enforcement lagged, most of all at the state and local level much beloved by GOP rhetoricians. This could be the election that confirms what many nonvoters say when asked why they don't vote: "My vote doesn't count." If it turns out the apathetic are right, and dutiful voters are wrong, look out, democracy.

If it takes seriously the battle cry of democracy, the left, in other words, has a chance to overcome the pettiness of recent years, the identity-group infighting, the Nader nihilism, and go to the heart of the matter, giving Rush Limbaugh and George Will something truly to worry about. The hand count is the perfect metaphor. The GOP is in the politically tough position of defending the rights of machines, not people, to count ballots; of arguing that the convenience of bureaucrats matters more than the rights of the people when setting election deadlines. But despite their entitlement, choosing our leaders is not their prerogative, no more than it was in 1776, or the 1960s.

Isn't it clear that the patriots are those who refuse to consign power to either machines or mobs of various descriptions -- the ones who smile through congressional lobbies, or the ones storming the Miami-Dade County Building? Isn't it clear that democracy is no idle piety -- that as a nation we are either committed to it or not?

Perhaps we tremble a bit now because we sense what is deeply at stake.