How to tell a sex partner -- with minimum pain and suffering -- that you've been diagnosed with an STD. 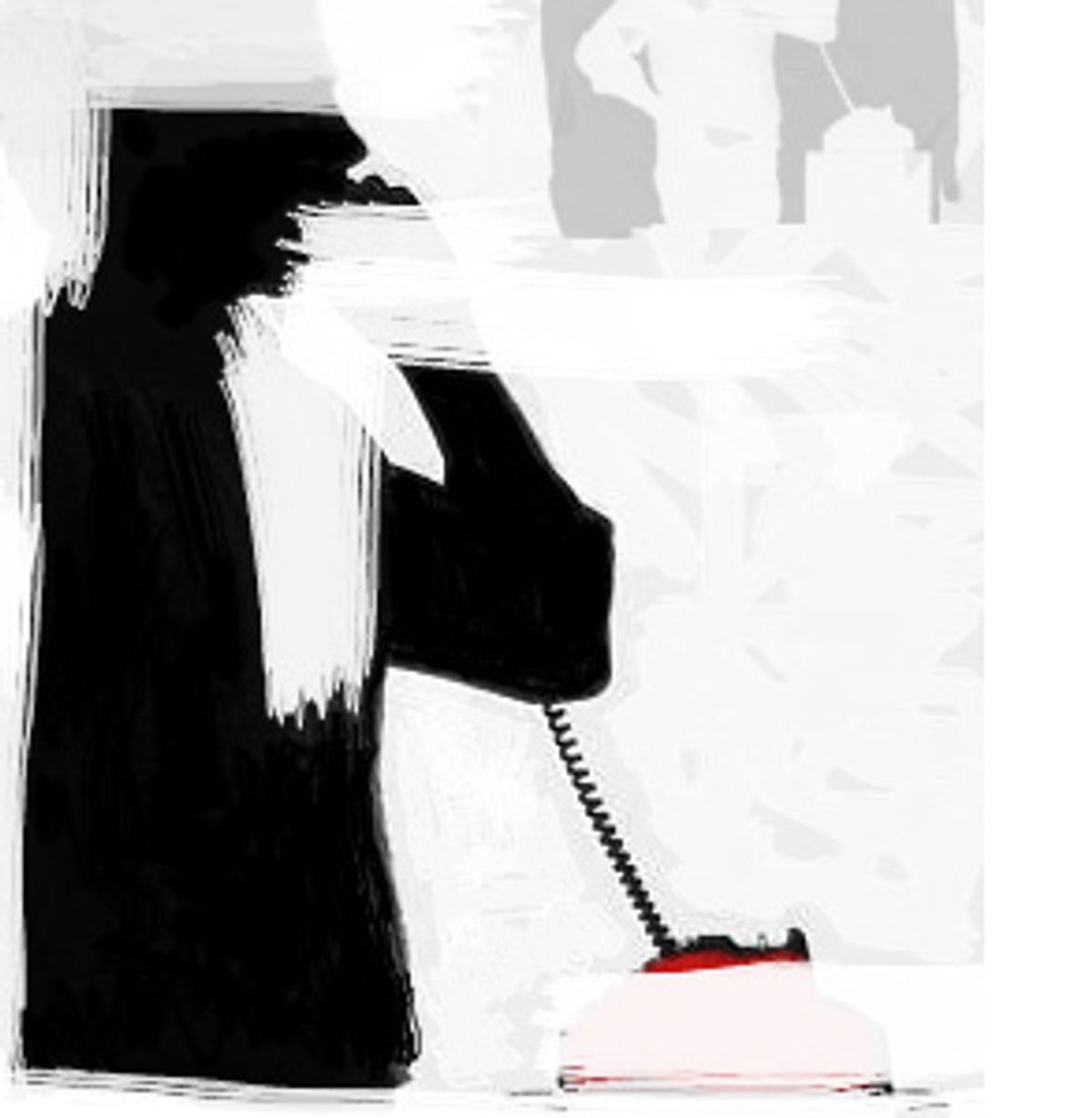 The phone's shrill ring wakes me from a dream involving a dozen well-hung she-male nuns. It's Sunday morning, early. I should just let it ring, but I don't. Duty and the fear of missing an important call goad me. So I find my bunny slippers on the floor with my feet without even opening my eyes, then lunge for the phone.

"I was sleeping," I say as I fumble with the coffee maker.

"Oh, sorry." Victor and Laura are traveling on the East Coast and forgot about the time difference. "So. I had this sore on the shaft of my penis. It sort of oozed pus, you know. A cream-colored pus not unlike the stuff you find inside those chocolate Easter eggs. Laura didn't actually have a sore, but it's been a little owie between her inner and outer labia."

It takes Victor a while to come around to the point of the call: He thinks I gave him a chancroid ulcer -- a kind of low-grade infection curable with antibiotics, a wimpy little brother to syphilis.

I'm a phone volunteer at San Francisco Sex Information, where obsessing about STDs is a way of life. But this discussion still throws me. "Victor," I say finally, "you wore a condom. I wore gloves. There were more layers of latex between our skins than heat shields on the space shuttle." Victor is even more fetishistic about safe sex than I normally am.

Victor proceeds to reconstruct our encounter like a murder scene. He retraces every permutation, seeking a fatal moment when I could somehow have gotten chancroid nasties on my hand and then transferred them to his willy. "The condom had nonoxynol-9. I could have gotten an irritation that left me prone to infection."

"I'm getting an irritation right now," I say.

"Hey, sorry about the early call. I'm running down the list of possible vectors." Victor is calling everybody who has recently touched his Notorious B.I.G. until he finds the likely chancroid carrier. Next on the list: a gal who sucked his cock a while back without a condom. Maybe she had a cold sore in her mouth. "I just hate to think someone's out there giving this to people and not knowing it," Victor obsesses. He now knows more about chancroid ulcers than his doctor does, including the fact that the germs can hide in your urethra.

I had been expecting Victor and Laura to call about maybe dallying some more at a future date, but it's only at the call's end that I hear Laura prompting Victor: "Oh, yeah. We really like you. Let's get together again sometime. Don't want to be all negative, huh?" Then they hang up so they can call the blow job girl.

I'm left feeling somewhat shaken, and not at all sure I want to provide Victor with future encounters to deconstruct in search of the culprit who gave him ringworm or something. But I'm not entirely sure how I would have handled the situation in Victor's place, or what the correct response would have been.

The post-sex STD call is the most virulent sexually transmitted disease of them all. Even if only one person gets an STD, everybody in the extended clan of lovers should be told. And the worse the STD, the more unpleasant the call.

Counselors encourage people who are diagnosed with an STD to contact their current and recent sexual partners. Some healthcare providers will make the contacts for you. And in the case of HIV, a clinic may ask for a list of past partners so it can be sure of notifying them, according to the Centers for Disease Control and Prevention.

But if you're calling past partners yourself, whether about HIV or a less threatening STD, there's no clear consensus on how to do it. When a person who has just had a brush with sexual vulnerability -- or even mortality -- has to call a current or former lover to spread the news, is it any wonder that civility sometimes flies out the window?

It doesn't have to. If you follow a few simple rules, you can make the STD call merely painful instead of excruciating. They can be summed up in two words: Be considerate. The same mutual goodwill that enables people to be intimate with each other is even more important when things get sticky.

"Try to communicate in a way that does not foment shame," says Carol Queen, a sex educator and author of "Exhibitionism for the Shy." "'Foment' sounds like an STD itself," she reflects a moment later.

"It's a serious enough situation," says Drew Campbell, author of "The Bride Wore Black Leather," a sex etiquette guide. He urges people not to be "flip" and to "avoid accusing the person." Campbell would frame a call this way: "I was concerned enough to let you know, and you might want to get tested."

Queen recommends calling at a decent hour and communicating directly. Leaving a message on an answering machine that could be overheard by someone else is taboo, as is giving a message to someone's roommate. "Convey the information in a way that's not going to be overheard or overseen," Campbell agrees.

And whatever you do, don't call your old flame at work. Campbell says people do this because they know they'll be able to reach the old partner there. "It's a way of putting distance," Campbell says, "a way to make it into a business transaction."

Campbell once worked in an office where a co-worker received an STD call from an ex after a falling out. "It was a shocking announcement," he says. The co-worker stood in the middle of the huge cubicle farm and went "totally pale," repeating "Uh-huh" over and over again. The co-worker then had to explain to his office mates what was wrong.

An STD sufferer needs to tell past partners as soon as possible, of course. Even curable diseases can get dire if they aren't treated quickly, Queen points out. Syphilis, for example, can become secondary syphilis, which is nasty.

"We treat STDs as if they were leprosy," Queen complains. Passing on a cold is no big deal, but spreading a nonlethal STD can cause all hell to break loose.

Another piece of advice from Queen: Get as much information about the situation as possible before you call someone with the scary news. If you can provide details about the symptoms and treatment of a disease, and the address of a good clinic nearby, it may cushion the blow somewhat.

Above all, don't waste a lot of time trying to find the "vector" who infected you. "The good you do trying to find a vector is minimal, and mostly is likely to feed your own sense of sexual victimization and anger, unless you know for certain that finding a vector could help you find other people who are infected," says Queen. Even for HIV, which has multiple strains, the CDC doesn't recommend trying to hunt down the original source of your infection.

If you do manage to avoid the flubs mentioned above, a call can be a positive experience. Esther Katz cherishes the memory of a former lover who called her to say that he'd tested HIV positive. "What made it work was that this man was in a lot of pain, but had remained able to care about me and took the trouble to give me information that I would need," remembers Katz, who helps organize the California AIDS Ride.

"He did not dump his predicament onto me," Katz adds. "He only mentioned what he had been going through after I had made it clear that I wanted to know. He did not distract me from my fears by tricking me into taking care of him. And he did not rush through the phone call to check it off of his list." The most important thing, according to Katz, is to not gloss over your own pain and shame, and at the same time be aware of the feelings of the person you've just dropped a bomb on.

What if you want someone else to do your communicating for you? I called Rachel Bolton, a spokeswoman for Hallmark, and asked her if Hallmark offers any cards for this purpose. She acknowledged that people may well use greeting cards for discussing genital warts.

"People like to communicate through cards, and sometimes the more difficult the message, the more people turn to Hallmark," Bolton says. "There are some [cards] that might be appropriate, but not without a handwritten note." She suggests that cards that mention hard times or sickness without "naming the malady" involved might work. "We have a lot of them that are apologetic in nature: 'I didn't mean to hurt you' and so on," she says.

But Bolton reports that Hallmark has no plans to unveil a card specifically to say: "I've been diagnosed since we played." "We do have a lot of cards that are extremely specific, like you've lost a tooth, or you're going back to school." But the "vast amount of market testing" Hallmark undertakes hasn't uncovered a massive, seething demand for an STD-related card, according to Bolton.

Charles Anders is news editor at www.anythingthatmoves.com. He is writing a book on cross-dressing.