The U.S.-backed Plan Colombia will soon touch down in a region battered by civil war and central to the cocaine trade -- will it ignite the conflict? 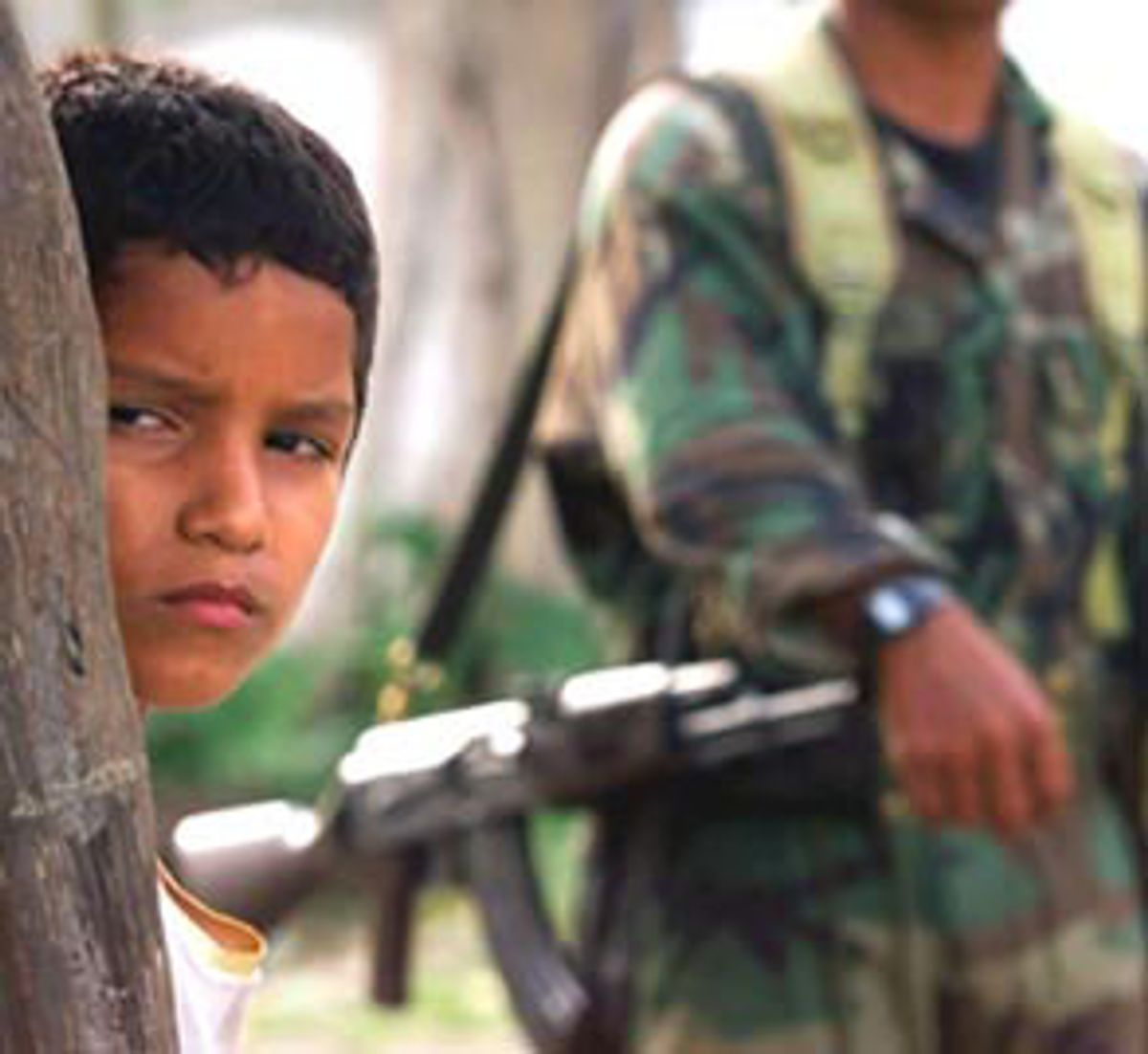 An hour after Mayor Carlos Rosas publicly described the "terror" that plagued his town of Orito in the southern coca-producing province of Putumayo, he was dead. Gunmen shot the mayor at point-blank range in front of his home in broad daylight and sped away. They were never identified or caught.

In the radio address he gave just before his assassination, Rosas described the fear that the citizens feel in an area that produces most of the world's cocaine and has felt the full force of the nation's civil war. "Corpses are appearing, cars are being burned, and this terrifies everyone," he said.

As Colombia stands on the brink of a major counter-narcotics campaign, most of which will be concentrated in Putumayo, the terror shows no signs of letting up.

Last month, just as the Colombian government and the guerrillas of the Colombian Revolutionary Armed Forces (FARC) were about to begin the most serious conversations of the 2-year-old peace process -- the possibility of a bilateral cease-fire -- the FARC froze those talks, setting the tone for a possible intensification of the civil conflict that has torn at this Andean country for more than three decades.

FARC spokesmen even accused the half-dozen congressmen reportedly kidnapped last month by the AUC of having staged their own kidnappings in order to facilitate the meeting between Interior Minister Humberto de la Calle and AUC head Carlos Castano.

But the FARC also places blame on U.S. policy in the region and said its decision to cut off peace negotiations was influenced by the U.S. Plan Colombia. Though the U.S. calls that absurd, it's clear that the future of the peace process will have a serious impact on the success or failure of the counter-narcotics campaign.

The peace freeze came as the U.S. also announced it was delaying the implementation of the Plan Colombia until January and a high level State Department delegation visited Bogota to finalize points in the plan

Originally the plan was expected to start early this month. Undersecretary of Defense Brian Sheridan in Bogota said U.S. and Colombian authorities had agreed to postpone the plan until January, when 33 of 60 helicopters included in the $1.3 billion aid package approved by Congress will arrive in Colombia and will be available for the Colombian armed forces.

Fierce fighting between guerrillas and paramilitaries has raged throughout the last two months in Putumayo, where most of Plan Colombia will be concentrated. Hundreds of residents have fled for Ecuador, since all roads to central Colombia are dangerous and controlled by one side or the other. Some who haven't left remained trapped by the rebels or the paramilitaries.

Putumayo was selected as the primary site of Plan Colombia because an estimated 216 square miles are planted with high-yield coca plantations, and over half of the entire Colombian coca production is harvested in this province. About 300,000 people are employed in jobs related to cocaine production.

"Putumayo is the FARC's Wall Street," said a foreign diplomat. "This is not an area of small plantations, but of heavy cultivation."

The area has practically been a war zone since Sept. 21, when paramilitaries took over important coca producing towns, killing those citizens they knew were guerrilla collaborators. In La Dorada, a key drug-producing town, the paramilitaries had killed up to 40 people suspected of leftist sympathies as of late October. U.S. and Colombian officials say the drug traffickers who depend on the crops produced in Putumayo had grown unhappy with the guerrillas and their control over the coca production prices. "The narcos brought the paramilitary because they didn't like the FARC controlling the market," said a U.S. government official.

The area's residents have been living at the mercy of the warring parties. The government has airlifted supplies, but the needs are still greater. It took 56 days after the guerrillas took over Pasto Mocoa highway for the Colombian army to reopen it. The road, an important one that connects Putumayo with the rest of the country, was littered with abandoned vehicles left after combat had stopped their owners on their routes. Even after the army asked for the vehicle owners to return, the cars remained.

Plan Colombia is expected to unleash the biggest military offensive to date in Southern Colombia. Fumigation planes protected by helicopters will spray bountiful coca plantations in the region, which is controlled by the FARC. Colombian mobile military units, trained by the U.S., will push into the territory and try to clean the area.

But how well the Colombian military will fare is not known. They have faced several military setbacks recently. The guerrilla ambush that left 53 soldiers dead and one destroyed Black Hawk helicopter last month has left foreign diplomats and Colombian military experts wondering what they can expect in the next few months, when the war is expected to get worse. "Putumayo is going to be one of the toughest areas militarily," according to Alfredo Rangel, a respected military analyst who advises the Colombian armed forces.

"When the army goes into that area to fight the FARC and end the coca plantations it will ignite the conflict beyond anything we have seen," he added.

Looming in the background of the decision to freeze negotiations are reports that all the fighting forces involved in this conflict have been making preparations to increase their troop size. Military experts and foreign diplomats say the FARC has been recruiting new soldiers, and expect the force to grow from 17,000 to up to 40,000. Police intelligence reports also show that the flow of weapons to the guerillas has intensified in the last few months, including the shipment of handheld missiles that could down helicopters. The Colombian army this week announced it would recruit 10,000 more men for three additional anti-guerrilla mobile brigades, but these troops won't be available for combat until next year. Meanwhile right-wing paramilitary groups have been pushing to be given political recognition by the government.

The FARC is playing a tough game that could backfire. Last week, Colombian police released an intercepted radio address broadcast to FARC troops by Jorge Briceno, aka Mono Jojoy, the FARC's top military strategist, in which he said he did not believe the peace process would work. Briceno told his troops that FARC was not "going to agree to peace because it doesn't exist" and that even if the FARC was able to seize power, there would not be peace "because there will then be war with the gringos and other powers."

The U.S. State Department in turn has said it is "ridiculous" for the FARC to use Plan Colombia as an excuse to stop all dialogue, and urged the rebels to return to the negotiation table. But the U.S. seemed to take a cautious approach too in announcing a postponement of the launching date for Plan Colombia. Some analysts say the FARC could use similar tactics as they used in 1996 to face the army. "The guerrillas have the possibility of provoking civilian uprisings and make them confront the army. What will that do for the international opinion to see a soldier facing a starving looking peasant. I think the potential in Putumayo could be terrible for us. At this moment, militarily, Plan Colombia is teetering," said Rangel.

But a U.S. government official rejected that scenario. "Information in the press suggests that peasants in Putumayo are leaving rather than submitting to the FARC's pressure to arm themselves against Plan Colombia."

Nevertheless, even high military officials understand that the role of civilians will be critical to how Plan Colombia will play out. "The only way that the FARC will be convinced that they cannot win the war will be to have a strong, solid, professional army that has the support of the civilian population," Defense Minister Luis Fernando Ramirez said.

Note: A correction has been made to this story.