"In My Life: The Brian Epstein Story" by Debbie Geller

An oral history of the real fifth Beatle shows the visionary genius of the man who discovered the Fab Four. 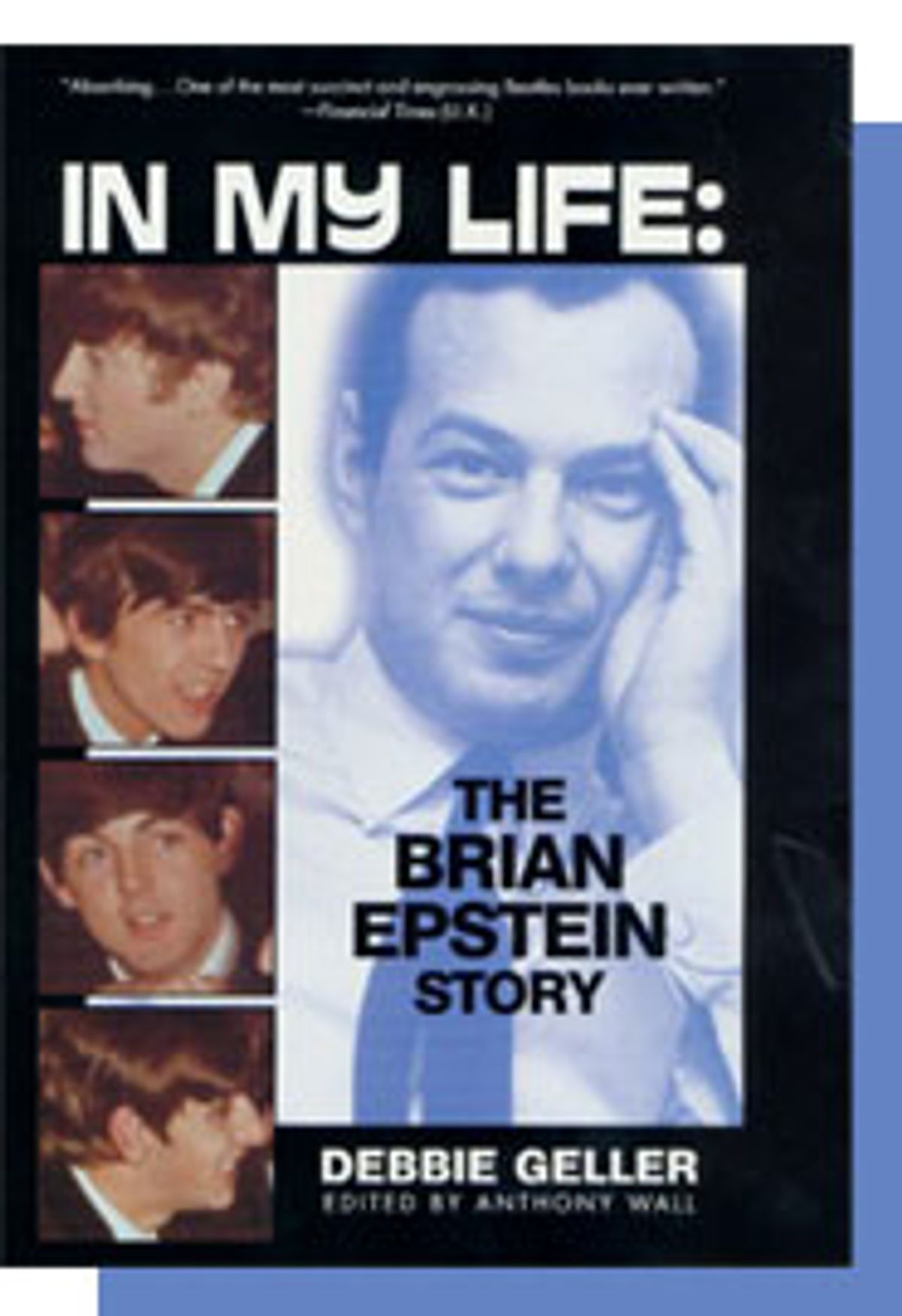 To me, in terms of popular music, the Beatles express a cross quality of happiness and tragedy, and this is, basically, what the greatest form of entertainment is made up of. I'm very much a Beatles fan.

-- Brian Epstein as quoted in
"The Beatles at Shea Stadium"

On "The Flintstones," where the character of a British rock agent was inspired by him (the episode where Pebbles and Bam-Bam become rock stars), he was called Eppy Brianstone. And in fact "Eppy" was the nickname used by his most famous clients -- the ones he always called "the boys," even long after they'd grown out of that endearment. He must have loved the offhand manner of the name. Jaunty and confident, it was everything he dreamed of being and never quite pulled off.

If you subscribe to the inevitability theory of history, then the Beatles would have made their mark on the world whether or not they had ever met Brian Epstein. And perhaps some London impresario, hearing about their regional popularity, would eventually have journeyed north to Liverpool and made them minor British stars in the same league as Cliff Richard or Tommy Steele -- big at home but virtually unknown in the rest of the world.

But the fact is, there was no one else in the Beatles' orbit with the vision or persistence to see what Epstein did when he ventured into the dank recesses of the Cavern Club to see one of the band's sloppy and rude lunchtime sessions. How else do you explain a proper, mannered record-store manager raised on classical music with no experience in band management suddenly deciding to manage the Beatles the first time he saw them? How do you explain his persistence in the face of rejections from almost every British record label, and the laughter that accompanied his unwavering assertion that one day the Beatles would be bigger than Elvis?

The only possible explanation is that Epstein possessed a visionary genius. The various histories of the Beatles (including the best, Philip Norman's "Shout!") have made much of Epstein's limitations as a businessman (a disastrous deal for American merchandising of Beatles paraphernalia cost the band members millions and tied them up in lawsuits), and it's true that none of his other signings -- Gerry and the Pacemakers, Billy J. Kramer and the Dakotas, Cilla Black -- survived their few hits. But whatever instincts he showed as record-department manager at his family's NEMS store in Liverpool, accurately predicting what records would sell and what would stiff, reached their full flower when he saw the Beatles.

The moving and revelatory "In My Life: The Brian Epstein Story" by Debbie Geller, edited by Anthony Wall, puts Epstein front and center in the Beatles story. The book is presented as an oral history with reminiscences from, among others, Paul McCartney; his American business partner, Nat Weiss; his personal assistant, Joanne Petersen; and other friends, family and business associates. There are also amazing passages from the secret memoirs Epstein wrote (considerably more frank than his "A Cellarful of Noise," actually written by his press officer, Derek Taylor). The interviews originally appeared in the two-and-a-half-hour British documentary "The Brian Epstein Story," which has yet to be seen in its full form in this country. (A version of about 40 minutes ran on the A&E network. According to Greil Marcus, who has seen both, it's a mutilation.)

Epstein sometimes said his bond with the Beatles was something indescribable, nearly mystical. But he remained an outsider. It wasn't exactly because of his Jewishness (Taylor says there was anti-Semitism in Liverpool, but there were also a lot of Jews throughout the city), and despite the stories that have always swirled about (particularly regarding Epstein's relationship with John Lennon), it may not have been because of his homosexuality either. It's often been said that Epstein decided to manage the Beatles because his first sight of them, unkempt and sweating in their leather outfits, was the embodiment of his rough-trade fantasies. But lust has never been a good gauge of talent, and the Beatles simply wouldn't have connected with the worldwide audience they did if they had merely been Epstein's sexual fantasy.

None of this is to diminish the ways in which Epstein, as a homosexual Jew, felt himself to be an outsider. But Epstein was always an outsider -- the "artistic" type in a family he loved but was separated from by his sensibility and temperament. The beloved Jewish elder son, he showed no interest in the Epstein retail business, and before he finally settled in and made a success of the record department at his family's store, he had tried a semester at the Royal Academy of Dramatic Arts and had a furiously unhappy stint in the Royal Army Service Corps.

"In My Life" gets at the pride and sadness of Epstein as outsider -- the desire to belong and the knowledge that he couldn't be anything other than what he was. But finally it gets at something more important than his Jewishness or homosexuality, more important than the question of whether his death by overdose in 1967 was accidental (as it was ruled) or intentional.

What's fully unexpected about the book is the way it finally explains the protectiveness that Beatles fans have always felt toward Epstein. Simply put, we loved him because he was us. In the inner circle and yet outside it, Epstein lived out the most intense version of the longing the Beatles created in all of us who heard them: the desire to be one of them.

The interaction between the Beatles and their fans, defined forever in the concert sequence that ends "A Hard Day's Night," combined the ecstasy of immediate, open communication with the sadness of two parties kept from each other. "Singing to you like this is my only way to reach you," Bryan Ferry sang in the most sublime Roxy Music number ("Just Another High"), articulating the gap that always exists between performer and audience. And as the ultimate Beatles fan, the one whose belief and dedication made it possible for them to become the Beatles, Epstein could not cross that final gap.

For me, the most touching moment in the book is the story of Epstein spending a Beatles concert at the back of a hall letting himself go, screaming along with the girls in the audience. The stock footage of girls screaming and crying at Beatles shows has over the years become a bit of a joke, a way of saying, even for some people who participated, "Look at those crazy kids." But there has never been anything crazy about those kids. Epstein responded to the Beatles in a way that has little to do with his homosexuality and everything to do with the ineffable, surging joy the band communicated.

One has never had to be a straight teenage girl or a grown gay man to fall in love with the Beatles. I'm a straight man who has been in love with them since my father kept me up to watch their debut on "The Ed Sullivan Show." I knew in my gut why those girls were screaming, and when I see the climax of "A Hard Day's Night" I know in my gut why they were crying, because I'm usually crying with them. The Beatles provoked the feeling Lester Bangs once described watching Elvis: "an erection of the heart."

"In My Life" settles once and for all the question of who the fifth Beatle was. For the best years of their career it was Epstein, who carried the same torch as millions of other Beatles fans. Tomorrow, the fifth Beatle will be whoever hears their music, or sees their movies, and falls just as deeply in love.