Call of the telex: "I'm not dead yet"

Like the pneumatic tube, messenger pigeons and French, this aging medium is here to stay. 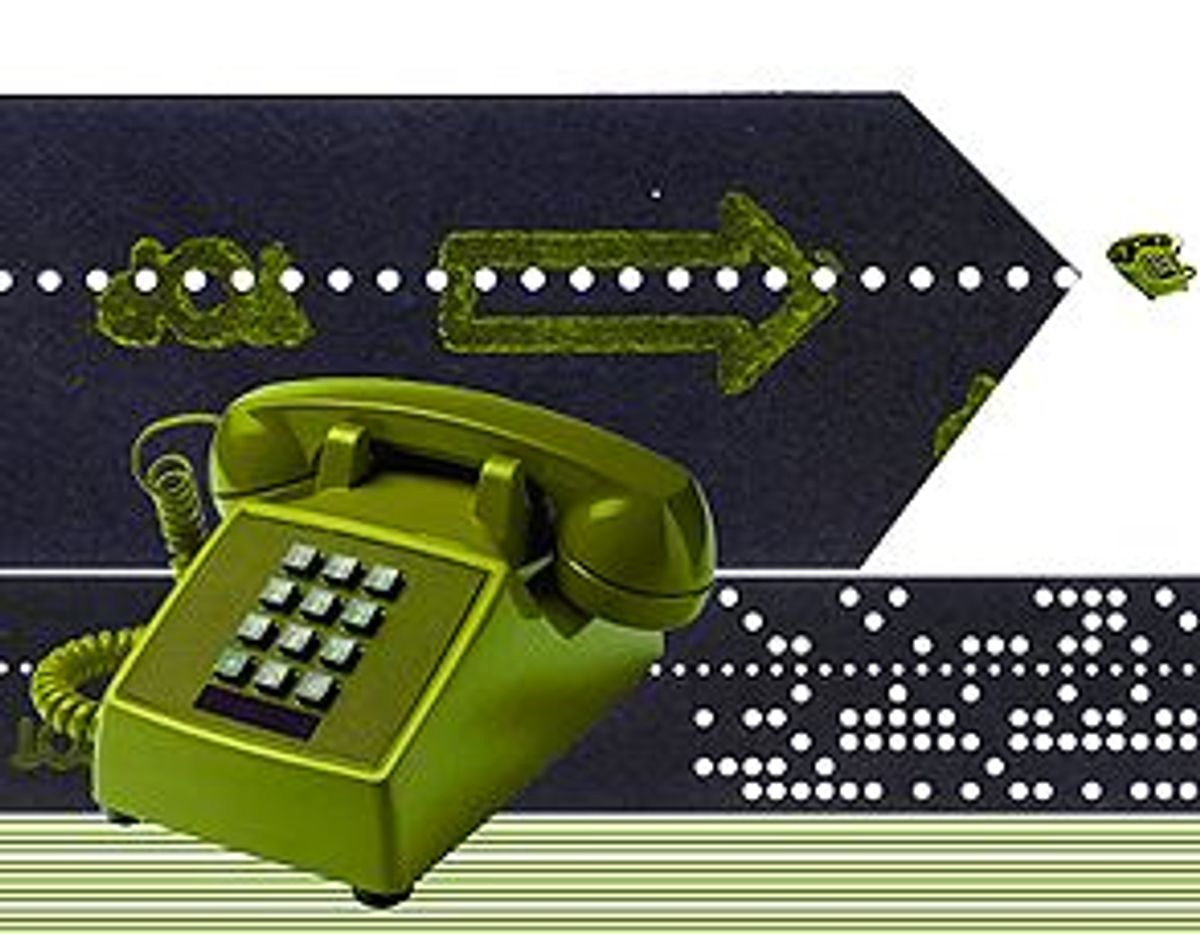 The first time I knew for sure I was looking at a telex machine, a magnificent cabinet-sized workstation of a beast, was in the early '70s sci-fi film "The Andromeda Strain" I watched on my mother's black-and-white television.

"The Andromeda Strain" was a bit like the Dustin Hoffman film "Virus," only 20 years earlier and much more fun. This was back before the grunge and clutter of "Bladerunner" or "Alien" -- back when the future was still futuristic.

They had all the great equipment. There were secret underground government laboratories with squeaky white curving corridors, flashing lights, a big impressive computer that never went down and, of course, a telex machine.

In a crucial plot development, a telex to Washington goes unnoticed because a loose scrap of paper jams the telex machine's ... bell.

Of course, in reality, the white-coated ones were linking up computers with wires -- the phone system -- back at this time in the '70s. They were creating the Internet; they just weren't telling Hollywood (or me) about it.

Somewhere between "The Andromeda Strain" and my adulthood, the telex lost its place in the gleaming futurism of the popular imagination. Which is to say: People forgot about it. And that's why I had a sense of vertigo -- of traveling through time -- when people at the fringes of Europe started giving me business cards with telex numbers on them.

And not just the fringes of Europe, either. A quick perusal of German commercial Web sites, for example, reveals a surprising number of telex addresses, right up there alongside the phone number, e-mail and street address. That's right, Web sites that give out telex numbers. This, of course, is pure German thoroughness: Fax if you have fax, phone if you have phone, and if you have telex, then, telex. Naturlich.

This is mighty considerate of those Germans, considering that for most of us, telex remains about as obscure and cumbersome a means of communication as, say, the ham radio. But just as the ham radio is kept alive through the enthusiasm of its aficionados, so the telex keeps on telecommunicating -- thanks to a combination of convenience, economy, protocol and just plain inertia that may keep it going into the next century.

Sometimes it can be awfully hard to kill off an old medium. Not so long ago telex was the very epitome of the up-to-date, the ruthlessly new. The wonderfully crisp, minimal black-on-white Reuters logo of decades of yore (simply the word Reuters written in the black holes of the punched tape some teleprinters use) perfectly echoed the utilitarian authority of the machine that delivered no-frills, up-to-the-second information.

Then, suddenly, telex started to look square, and, in the mid-'90s, Reuters made an awkward shift to today's hesitant, tinted version of its logo, with more dots and a fussy little bi-colored disc. The new Reuters logo hints at the unspoken fear that news agencies may soon look as outmoded as punched tape.

We should relax. Though telex use may not be quite as robust as it was in the days of yore, it still holds a place among the ways we communicate with each other. Viva telex.

If a fax is like two photocopiers connected via phone line, telex is like two typewriters. Type in your message on one end, and the person at the other end reads just that, printed out from the teleprinter on their end.

Telex is not, by and large, about packet-switching -- the process by which little chunks of labeled data, as in e-mails, make their way across the network to reassemble at the other end. Like telephones in their plainest form, telex opens a line, two machines at each end greet each other and text is transferred.

The popularity of telex predates that of the fax machine. Fax technology became prominent in the '70s, when Japanese manufacturers began using it for their domestic market.

Speakers of Japanese and Chinese aren't the world's most ardent typewriter users. You wouldn't be either if you had a written language with 5,000 word symbols. You'd want to be able to scribble a quick note by hand and send a photocopy of it down the phone. So the Japanese made fax technology happen.

But outside Japan, telex just kept on working. Why? People liked it. Or they were just used to it. Or, maybe, there are a few things about telex that other technologies just don't offer.

Like telephones, telex is capable of a few clever tricks. Just as some lines can support 60 phone conversations at once (where each sweet nothing is chopped up into little slices, squashed smaller to fit down the line in real time and then separated and unsquashed in numbered order at the other end), similar things can be done to make telex waste less network capacity. As most of it is more one-way than phone talking, telex is even easier to shoehorn into spare blips of bandwidth than telephone chat in the same way.

And there's the answerback code. Telex machines give senders confirmation -- with rather more certainty than fax machines -- that they got your message at the other end.

But why even bother with telex when we have e-mail?

1) Lots of companies do not have a computer or a modem. The world is bigger than we thought.

2) Telex is easy and familiar. Most companies have a computer with a modem, but that doesn't mean employees are comfortable with them.

3) Telex is the status quo. Some business sectors are still grouped around networks of firms with established routines of sending and receiving telexes each day. This penalizes any individual firm that tries to upgrade ahead of whatever ponderous association decides things by consensus for that industry.

Last year at Manchester Airport in Britain, I missed the last train home to my mother's village because of flight delays. Air France agreed to pay for my taxi across the north of England, but before I could be sure of its reimbursement, the handling agent and I had to sit two hours in the airport until 1 a.m. waiting for Air France in Paris to send him ... a telex.

Last month an American building consultant friend in Budapest was baffled to get a fax from DHL asking him to send a telex to Hungarian Customs to release a package. He had to go to a hotel to send one.

4) Inertia. Could telex be to electronic media what the French language is to international diplomacy?

Look at how long people have continued to take French seriously as an international language, almost two centuries after France lost North America and Egypt. No one really knows why French is still on the list. It just stays there, wasting the time of generation after generation of English-speaking schoolchildren who could instead be learning Chinese, Arabic or Japanese.

French clings on, popping up on your postage coupons, at the Olympics, in the United Nations.

And so it is with telex. Having been red-taped into some of those very same international protocols, telex may have inherited the survival skills of French.

But does telex have any actual advantages? Does it deserve, for any technical reasons, to have survived this long?

1) No one sends junk mail to telex addresses.

2) Telex is rarely hacked. It could be, but most hackers don't find doing so particularly interesting. Telex viruses? Nope.

3) Once installed, telexes are robust and simple. Telex takes up less bandwidth and breaks down less frequently than fax, for example.

4) On the same principle, since most telexes in use have been in use for eons, they're cheap to use, and were paid down years ago.

5) In the kinds of places where the telex machine still looks new (think Mongolia, Chad, Paraguay), it may be the simplest, most direct means of communication.

(Note to international business people: When trying to reach an exotic location -- a nickel mine in Siberia, a ministry in Morocco -- always try sending a telex. That office may only get two telexes a week, and if your telex machine helps justify someone's job, you've done a good thing. Plus, as a Westerner, you probably stand alone in using telex. Most of your competition won't bother.)

6) Telex messages are concise and to the point -- not unlike text messages between mobile phones, known as SMS, for "Short Message Service."

In Europe in 1999, 12 billion SMS messages were sent between mobile phones. SMS is primarily a cellphone capability, but why not broaden our technological horizons a bit? Telex and SMS would be natural friends if they only got to know each other.

Both are for very basic, short, functional text messages. They both use an austere, even spartan, character set. Both carry messages like:

And in neither medium does anyone whine that the capital letters mean you are "shouting" or showing inadequate "netiquette."

As long as you know the callback code and the telex address, it is certainly possible to send an e-mail to a telex terminal on some systems. Since people already use mobile phones to contact e-mail addresses, it's just a step away from sending SMSs to the only other place where no one blinks at getting single-line messages with bad grammar -- telex machines.

And who would ignore such a thing? On the same principle that Western Union followed when it placed a picture of a telegram in a newspaper and challenged readers to ignore the message, a telex or an SMS rarely goes unread.

So telex has a rich world role too: It's a good way of getting through the incoming-mail filters that more and more busy people need to employ.

Spam, sent laboriously, in a way inconvenient to the sender, is not spam.

Recently, I sent a telex to a colleague at a German publishing firm. Later, he described his amazement upon receiving the telex sent down to his floor from some forgotten technical backroom in a dusty corner of his building. "I thought our office got rid of telexes years ago!" he told me in wonderment.

Of course, gateways linking clunky teleprinters to trendy mobile phones will eventually soil this spam-free Eden of messaging innocence. But all devices have the right to speak to each other, if only for the sake of symmetry and neatness.

But perhaps the real explanation for telex's tenacity is a dusty old protocol in the rulebooks of the International Telecommunication Union.

According to Telexnet, a supplier of e-mail-to-telex software, "Telex still remains the only legally recognised form of data transmission."

What makes telex the only legitimate mode of communication for thousands of diplomats, lawyers and other international paper pushers? The answerback code. When it comes to official business, people need to know for sure that messages reached their destination. Like the equally underutilized registered letter, the telex may have a firm place among our growing media options.

Technologies only a little deader than telex have a powerful appeal for aficionados of the poignantly obsolete, the Dead Media List.

They've been nibbling round the edges of telex for a long time. Pictures-by-telex, home telegraphs, the telegram boy -- media bygones like these are arcane enough to have received a proper goodbye from information technology's museumologists. But telex hasn't joined the ranks of the obsolete yet.

But one does have to wonder if a Dead Media obituary for this predecessor to the Internet is imminent.

Dead Media's founding necronaut, Bruce Sterling, is careful not to sound the death knell too soon, highlighting quaint survivals: the French Army's still-functional messenger-pigeon unit, or Prague's fully operating citywide network of pneumatic postal tubes. We may not need telex as much as we used to, but that doesn't stop us from taking it out of the closet every now and then. If the Dead Media hearse hasn't yet come to take telex away, perhaps we ought to give it another chance at greatness.