The long-awaited chronicle of the Nobel laureate's path from bootlegger's son to literary boychik to cranky old man shows why Saul Bellow has many admirers but few friends. 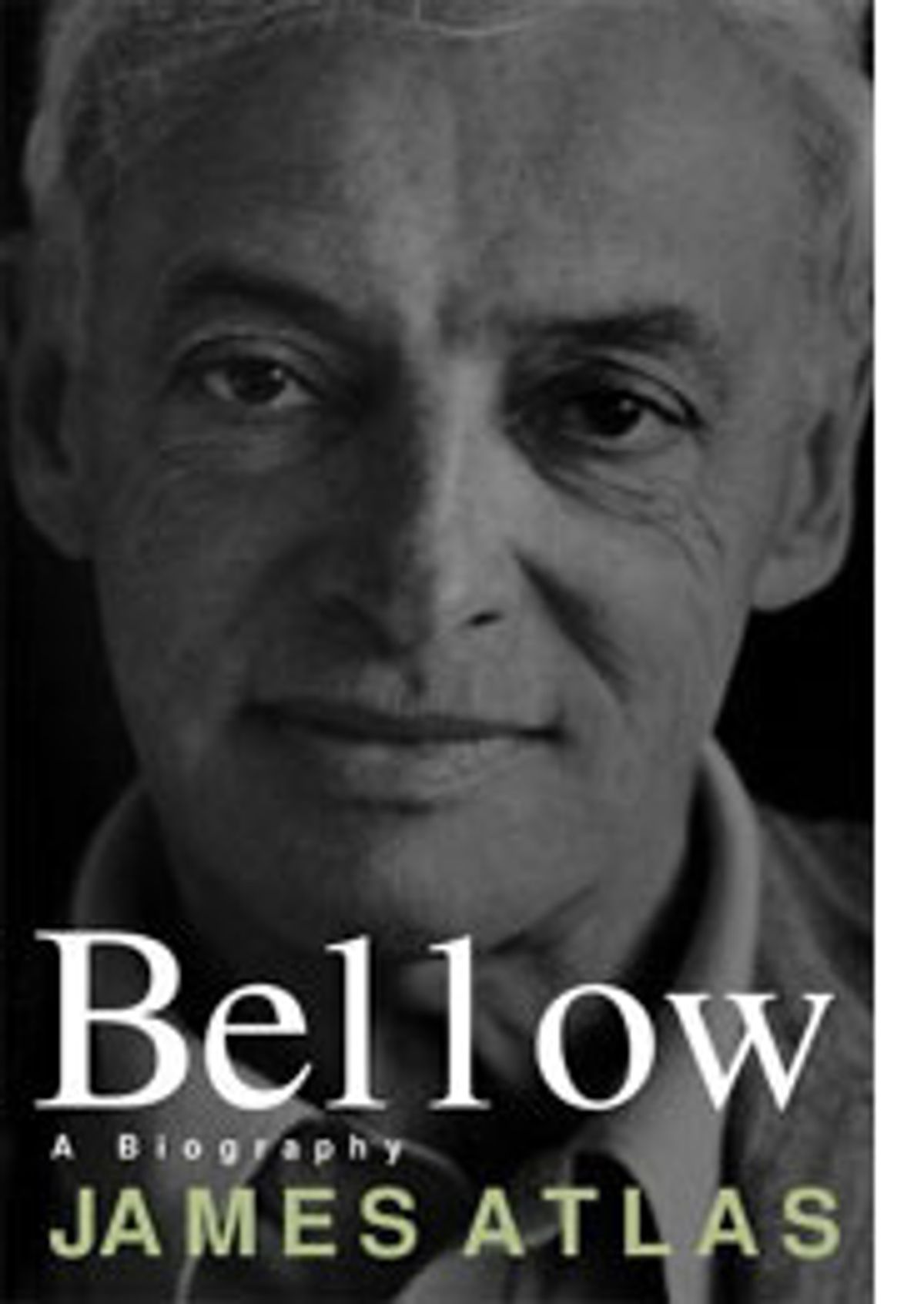 It is right up there on the shortlist of memorable first sentences in American fiction: "I am an American, Chicago born -- Chicago, that somber city -- and go at things as I have taught myself, freestyle, and will make the record in my own way; first to knock, first admitted; sometimes an innocent knock, sometimes a not innocent." That sinuous, braided opening of Saul Bellow's "Adventures of Augie March" announced the arrival, in the spring of 1953, of one of the most important literary groups of the 20th century, American Jewish fiction writers. Formed on the streets of urban ghettos and in the corridors of city high schools, sharpened by the political give-and-take in the cafeterias of city colleges, they had long been appearing on the pages of small but influential journals like Partisan Review.

But with Bellow's National Book Award-winning breakthrough with "Augie March," his third novel, the walls to the great American readership, to the book clubs and college reading lists, were breached. Bellow had knocked, not so innocently, and the reading public not only answered but proceeded, over the course of the next two decades, to give him, Bernard Malamud and Philip Roth a regular place on the bedside reading table.

Nearly half a century since his breakthrough, and almost 25 years since he was awarded the Nobel Prize for literature, Bellow is the subject of a new biography by James Atlas, a New Yorker writer and author of an acclaimed biography of Partisan poet Delmore Schwartz. Atlas writes in the introduction to the new book that he had originally expected to tackle the life of man of letters Edmund Wilson, but found himself in a dry hole five years after signing the contract for the book. "I had a toxic response to [Wilson's] character," he writes. "The bullying proclamations, the tedious self-revelations, the drinking and philandering -- in the end, he just didn't appeal to me as a subject to whose life and work I was willing to apprentice myself for the better part of a decade." Instead, partly at Roth's urging, Atlas set out on a 10-year project to chronicle Bellow's bullying proclamations, tedious self-revelations and (relatively alcohol-free) philandering.

Over the past few weeks, Atlas has taken multiple hits from critics on both sides of the Atlantic, who have accused him of placing undue emphasis on Bellow's narcissistic, arrogant traits. Atlas is not, unfortunately, the sort of writer who can take a wry view of the disparity between Bellow's moralistic tone in his writings of the past few decades and the novelist's own less than admirable behavior. The same nature whose reaction to Wilson's faults reached toxic levels is at work here, and the chemistry is apparent. Yet it seems impossible that any biographer could examine Bellow without displaying some aversion to some of his behavior, and to the moral lecturing made hollow by those deeds. Atlas has also been accused of tracing the real-life sources of certain of Bellow's characters in a ham-handed way, but this is also a dubious charge. There has not been a writer since James Joyce who has reveled like Bellow in the real-life connections to his fictional characters. That Atlas spends a large amount of his time tracking down these models is true, but what reader would not want to know these sources, fragmentary as they must surely be? Atlas' main crime in the eyes of his critics seems to be felony-level failure to rhapsodize. To all but card-carrying fan club members, this is an offense to be welcomed.

Let's be glad Atlas made the switch from Wilson to Bellow. Bellow's life, while it may have mirrored Wilson's in some ways, at least has a genuinely interesting "up from his bootstraps" quality to it, and a far higher artistic quotient. When Bellow first sat down to write at a card table in the back bedroom of his in-laws' Chicago apartment in 1938, he had nothing like the head start that the privileged Wilson had going for him -- no key to the clubby publishing world, no publicly recognized right to take aim at the world around him. He was the bearer of a bachelor's degree from Northwestern, recently fired from a job at his brother's coal business and completely without prospects. And yet he wrote, wrote into the void, with energy and with admirable discipline. It would be three years before his first published story appeared, in the pages of Partisan Review, and six years before the publication of his first novel, "Dangling Man."

It was a lonely road but, as Atlas portrays it, one that suited a nature that ego and family circumstances had made solitary in the extreme. Born in 1915 near Montreal to Russian immigrant parents who had seen their upper-middle-class life in St. Petersburg fall apart, Bellow was beset from an early age by a violent, tyrannical father and two money-hungry brothers who belittled his artistic aspirations. When he was 8 years old a severe bout of pneumonia kept him confined by himself to a ward in a Montreal hospital. "The void created by this long separation from his family remained with him all his life," writes Atlas. It was "the primary life experience that defined him ... It showed him there was no one to count on." "I never belonged to my own family," Bellow later said. "I was always the one apart."

Through a rough-and-tumble upbringing in grimy 1920s and '30s Chicago, where his family had moved in 1924, Bellow charted his own aloof course and continued doing so into adulthood, where he had few lasting friends and personal relationships. The story of Bellow's adulthood is one of a continuing series of academic appointments (at Bard College, the universities of Minnesota and Chicago and most recently Boston University), marriages to increasingly younger women, affectionate but inattentive relationships with his children and multiple adulteries. Atlas chronicles it all with a mixture of distaste for the failed family man (he must have soon tired of writing variations on the phrase "and the old pattern repeated itself") and admiration for the disciplined writer.

Of course, for a writer, the more uncomfortable his experience, the more ready material he has. Bellow is the undisputed master of 20th century catch-and-release fiction, wherein personal relationships are swiftly unhooked and tossed into that vaguely parallel stream of the written oeuvre. The result has been a body of work heavily weighted with neo-romans à clef. These can yield fascinating figures like the Allan Bloom-inspired title character in this year's "Ravelstein," the fervent Moses Herzog or Von Humboldt Fleisher, the Delmore Schwartz-like poet of "Humboldt's Gift." It can also memorialize the tedious, as in the case of the cranky, heavily academic worlds of "Mr. Sammler's Planet" and "The Dean's December."

It took only a decade and a half for Bellow to go from literary boychik to cranky old man. The middle of 1964, when "Herzog" was riding high on the bestseller lists, was probably the author's professional apex. In a few years, as the country plunged into the unrest of the late '60s, Bellow would become the literary poster boy for neoconservatism. Political, cultural and sexual crankiness has been a Bellow hallmark for the past three decades, most famously in his dismissive comments on multiculturalism: "Who is the Tolstoy of the Zulus? The Proust of the Papuans? I'd be glad to read him."

In Bellow, Atlas found a subject whose life straddles the two career patterns of the 20th century American writer. Before 1950, most struggling novelists paid the bills with work on newspapers, magazines and trade journals while writing books in their off time. The latter half of the century has seen the numbers of papers and magazines dwindle, and new MFA and creative writing programs spring up to provide the day jobs. Bellow was in the first wave of this trend. A chronicle of the jumps from one visiting professorship to another may not provide much excitement, and it certainly means we're in for some real snoozer bios when the lives of today's academic scribblers come up for recording; but Bellow's story is enlivened as few are by the rich trove of his letters -- perhaps the last great body of literary correspondence by an American writer -- that fills in the interstices of his patterned life with his rich inner musings.

"I had no idea our time would be so brief," Bellow laments about the 30-year rise and eclipse of his crowd of intellectuals who had rendered the Jewish American experience. Today, at 85, with a new novel and a new baby daughter, he can certainly be said to have made the record in his own way. And the freewheeling narrative voice he brought to literature has influenced many other writers. Bellow's star, unlike those of all his contemporaries except the slightly younger Roth, has declined but not fallen. The ultimate value of this biography is in the lucid view it gives of the ascension and subsidence of a worldview -- one that, in Bellow's case, has left a body of work with many admirers and few friends.