My mother always told me I was fat. Then I realized that she was afraid she was. 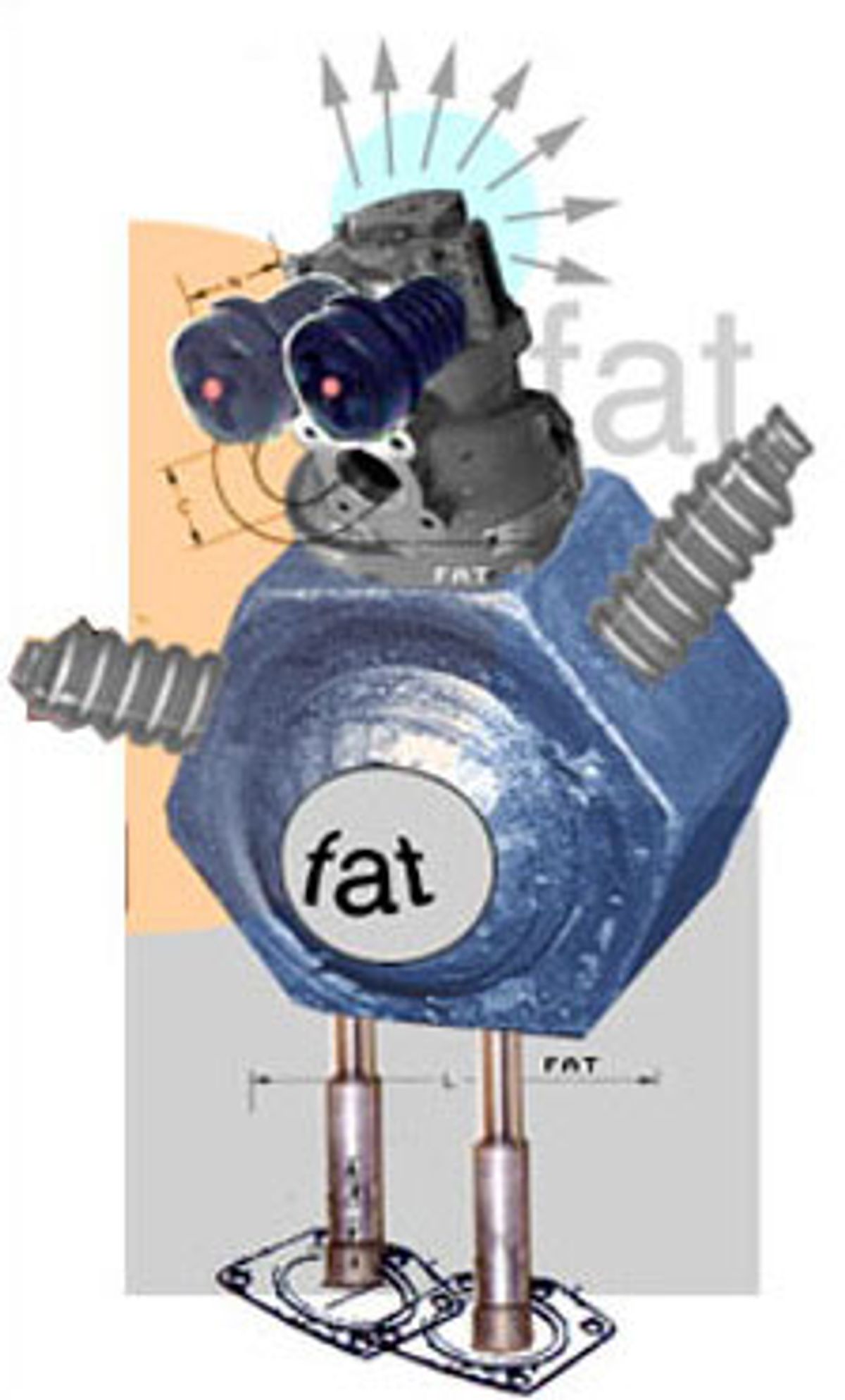 I wanted it to be my mother's problem.

She was the one obsessed with weight. She was the one who hated her thighs. She cooked our meals, making nothing but salad for herself, then hovered over the kitchen sink sucking shreds of chicken meat off the bones we left behind because she was so hungry. Not me, I always declared. I have a positive sense of self. My body is my home.

Then my body became somebody else's home. Within 10 weeks after my pea-size fetus moved in, that home gained 15 pounds.

"Your mother only gained 15 pounds throughout her entire pregnancy with you," said my dad.

"Well, she also smoked throughout her entire pregnancy with me," I answered, in a weak attempt to hide how fat and inadequate I felt. After I hung up the phone, I went to my kitchen and made a pot of macaroni and cheese. It was July. I was so hot and so nauseated that all I could do was lie on the sofa in front of the air conditioner or eat pasta. Sometimes, when I did both at the same time, I counted it as exercise.

"You're gaining too much weight," my first obstetrician declared from behind his enormous desk. He was looking at my chart, not at me. He held the manila file with the records of my pregnancy thus far. His fingers were thick and stained with the unnatural caramel color that comes from regular sessions at a tanning salon.

"What do you think I should do about it?" I asked him, prepared to hear about nutritionists, prenatal exercise programs and salad. He tapped his fingers on the desk. I couldn't imagine this man reaching inside me to help pull out my child.

"Eat less," he said, still looking at my chart.

At that moment, I knew I was leaving his practice. What if I hadn't read all those books about pregnancy and I had interpreted "eat less" to mean "diet"? I could seriously harm my baby by following his idiotic advice. He droned on, spewing some incomprehensible crap about pregnant pioneers in covered wagons bouncing merrily over the prairies and how modern women worry too much. ("Although you're a Jew, right?" he asked. When I answered yes, he said, "Me too. Our ancestors didn't know from covered wagons.")

To my recollection, lots of those carefree pioneers died en route to the West. I asked the receptionist to make copies of that chart of mine before I left.

But the doctor's words had left an indelible impression. I was gaining too much weight. Suddenly, all my self-assurance went right out the window. Every pregnancy-related pound I added made me sweat in fear of a lifetime of fat.

"Let's see what the damage is," the nurse said each time I stepped on the scale at my new OB's office. I would fume at her choice of words -- and yet I said nothing, because underneath my righteous anger I had the guilt-ridden, self-hating certainty that weight gain was damage. I was out of control. I was bad.

Meanwhile, my mother had started lifting weights and eating a high-protein diet during my pregnancy. She emerged from her regimen looking small and hard, and expressed delight that my father, too, was lifting weights so that by contrast, she looked even smaller. I was big. I loved my pregnant belly, loved its undulations as the baby grew legs and put them to use. I did not love my pregnant thighs, hands, upper arms and chins (I had three by my count). By the final month, I kept my eyes closed when I stepped onto the scale at the doctor's office. After I had gained 45 pounds of pregnancy weight, I stopped counting.

I felt guilty and small-minded for worrying about fat. I was nurturing a child, I told myself: My body had donated its services to the protection of this brand-new human. But fat was fat. And to see my mother slimmer by the day made me feel more slovenly, even less maternal. How could I take care of a baby when I couldn't even take care of myself? My mother was in control. I was out of control.

My daughter was born Feb. 5. She weighed 6 pounds, 2 ounces -- the exact amount that both my sister and I had weighed when we were born. She was such a tiny thing, too little for most of the newborn-size clothing we had waiting for her. But she started eating, and she started growing. And growing. I never understood the expression "to blossom" so well before. Blossom is exactly what she did. I'm still amazed that simply by sucking on my breasts, this person grew round and bright and glorious.

"I didn't say she was too fat. I meant it in a good way," he muttered. Well, maybe, I thought, but as far as I was concerned, there could be no such thing as being fat in a good way. Not when I recalled my father running five miles every day; my mother baking tofu croutons with garlic powder to add protein to her salad; my sister traveling to her weekly Weight Watchers weigh-ins. How had I failed to notice that my mother's problem with consumption had consumed my family? And how could I think I had escaped?

I remember twirling in front of a mirror in a dressing room with my mother when I was in high school, admiring a skirt I'd decided to buy.

"Oh, it's great," she responded. "It works miracles for your thighs."

All the enjoyment I had about the skirt drained right out of me. According to my mother, I had to dress to hide myself, not for fun. Shopping trips with Mom were anxiety festivals: Does it slim my rear? Camouflage my hips?

In my early 20s, I started wearing miniskirts in furious protest against years of cover-up. Take that, Mom, I said to my reflection in the mirror as I examined my exposed thighs. I didn't realize that my defiance was just another mask for the innate fear of fat that had taken root too deeply to be excised with a piece of clothing.

I spent so many years angry at my mother for insisting that I was too heavy because she felt that she was too heavy. Leave me out of it, I yelled silently at her in my head. Why do you care if I look fat or thin?

Now I find myself dressing my daughter in adorable, colorful little things, laughing as she laughs up at me from her changing table, her bright blue eyes screaming pleasure -- and I'm worried that her thighs look fat. She's still a tiny baby, and already I'm doing it to her, too.

Finally I understand the intense attachment that makes a mother see her own fragile self-image blown up bigger than life in her daughter's legs. I rub my hands over the velvet skin dimpling my baby's gorgeous knees. I don't want her to look in the mirror someday and see my fears when she looks at her body.

When my parents hold my daughter, I see no judgment in their eyes of her roly-poly arms and legs. Not even my father's "fatty" comment goes beneath the skin. They treat her with pure love. Fear of fat is part of my family's history; now it's my goal to keep it history. Can my daughter learn that food is pleasurable, that exercise is pleasurable, that clothes are pleasurable?

Can my mother and I keep our mothers' problem to ourselves?

Anne Burt is a freelance writer. She lives in New Jersey.